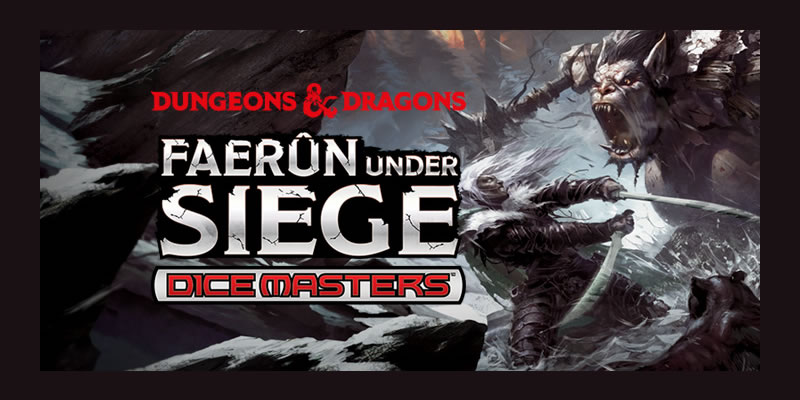 In all walks of life, there are corner stones that defined and embedded an idea within a community, whether we are talking about Tolkien with fantasy, Hitchcock with horror or Baer with video games. When I tell ‘non-gaming’ friends that I play board games, nine times of ten they reply ‘what, like Dungeons & Dragons?’

Since the mid 70’s Gary Gygax and Dave Ameson’ creation has captured the imagination of kids and adults alike becoming the leader in not only their own genre but also the example which all other game designers, developers and publishers aim for.

Forty years on and the D&D brand is as strong as ever although todays review is not on a tabletop RPG classic but a dice rolling, dice collecting, battle card game, Faerun Under Siege. Let’s find out if there’s still fire in the old dragon yet or if it will be banished to the deep dark dungeons from whence it came.

Faerun Under Siege is a two player game that uses Dice Masters dice building mechanics. WizKids have overlaid the Dungeon & Dragons fantasy theme to create the follow up to their own 2015 game Battle for Faerun. Despite being the second game in the series, Faerun Under Siege is not a sole expansion pack but a self-contained starter set that allows two players to experience the game although, as we will discover, this is more of a taster rather than a full blown meal. The idea of the game is to build an army, purchase characters and equipment then defeat your opponent in battle, the first to lose twenty life loses the game. 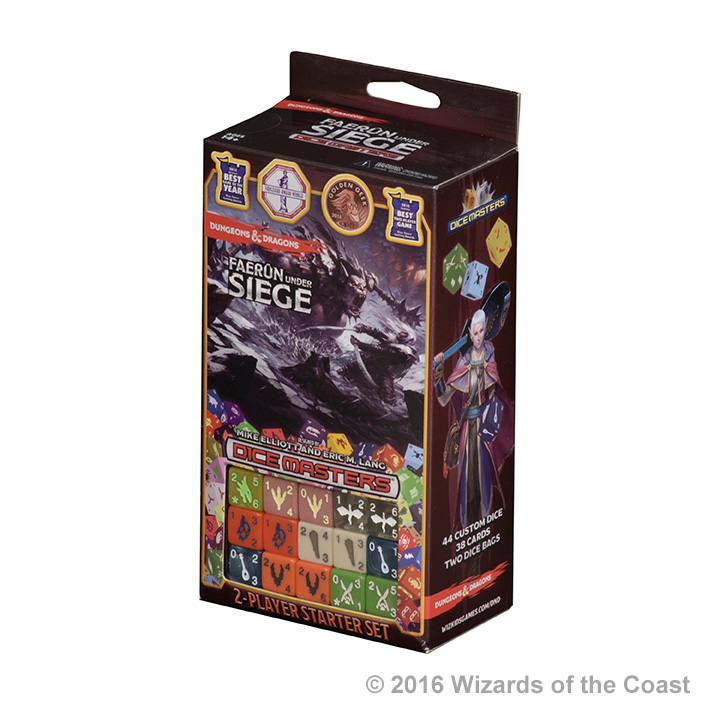 The set comes with 44 custom dice, 38 cards and 2 dice bags. All of my favourite games contain the same component and that’s dice. The first thing that hit me when I opened the Faerun Under Siege box was the amount of dice that are in there and not just your normal D6 either but beautiful, colourful, custom dice designed with nice art and good detail providing all the information that the players require. The dice will show characters attack/defence/fielding cost, its custom icon (needed to field it) and what energy that character produces. There are four types of energy in the game with character cards requiring a certain type of energy to purchase their dice. Some dice will also show a burst symbol on them that can activate a special ability as listed on the character/action card. The game also comes with white NPC dice that are the mainstay generic dice and don’t come with character cards although they can be used to battle or provide energy.

These dice are used as the players warriors and monsters throughout the game, a mechanic that as I mentioned in my Champions of Midgard review is one that I like a lot as it not only keeps play areas tidy but cuts down on box space meaning a smaller cheaper product. Don’t get me wrong, I love board games with miniatures but not all games require them and dice are an excellent alternative.

To complement those custom dice are the character and basic action cards which will put a face to their warrior or monster. The art work on the cards is fantastic and gives off a crisp, vibrant tone that is unique to each character, examples of this include: The White Dragon who stands proudly in front of a cloudy and foreboding night sky, the Hell Hound that is hiding in the shadows as if stalking its prey or the Gnome Ranger who appears tense and ready as if waiting to be attacked in a gloomy dead forest.

It’s not just the art work that makes the cards as good as they are either or what sets them apart from other Dice Masters games such as Age of Ultron or Civil War. The setup of the cards is pretty much perfect too. On the top half you will find the character’s name and subtitle, the card cost, type of energy required to buy it and its affiliation. The middle of the card contains the character’s experience or special ability whilst the bottom of the card will show which dice are used, how many can be used and the level of dice used how powerful the character is). The top to middle of the card is divided by a gold edging whilst the middle to bottom is divided by a coloured stripe which denotes the cards rarity. These might sound small and insignificant but its touches like this that helps make the cards easy to read and understand by separating information into easily digestible segments.

The third component in the box are the two dice bags which, and I’m not being harsh are rubbish. Yes, they continue the theme of amazing art work and yes, they do the job of holding the dice but they are made from paper, make an annoying sound when a player pulls dice out and they crease just by looking at them.

The rule book is clear and concise and offers colourful diagrams but can be very text heavy in places and doesn’t have an index for players to refer too. There is however a quick start game that will talk players through the basics which will immediately help in understanding the concept. The basic game rule are not the rules that I will be referring to through the rest of the review, I have been using the tournament rules listed at the back of the book.

This does however highlight an issue with the starter set as the set alone does not include enough cards or dice for two players to play a full game of D&D Dice Masters. For that you must buy foil booster packs which include more cards and more dice. 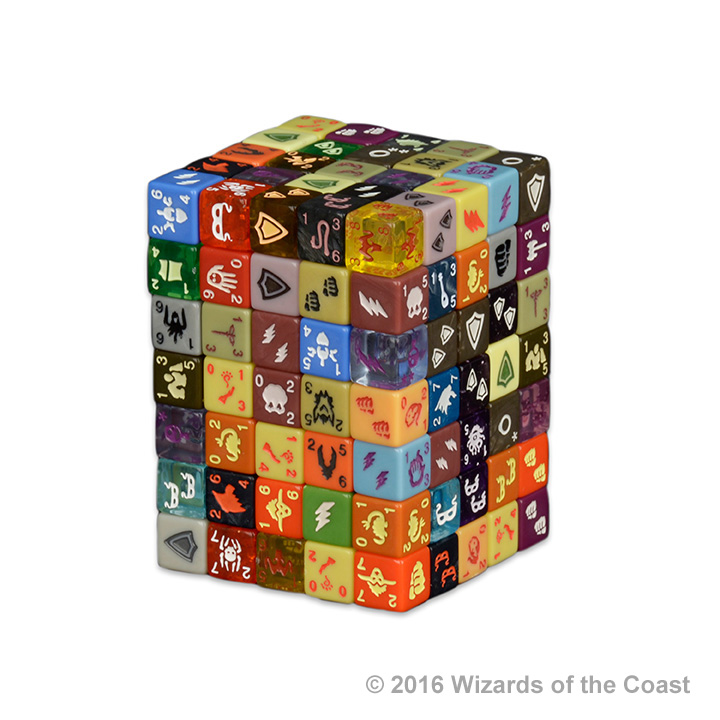 Let’s take a look at the set-up and run through of a players turn.

Each player receives twenty dice and must choose which character cards these dice will begin with, the character card will state a maximum amount of dice that can begin the game with that card. In this starter set all characters may start with four dice (although the set comes with only two dice per card) but some will be less.

Each player will then place eight NPC dice in their own bag and the game will begin.

The player who is going first will draw four dice (first round will always be NPC dice but this will change once other dice are purchased) from his bag then roll all four on to the reserve pool area of play, he may wish to re-roll some or all of them again but must keep this result. Depending on the dice results the player has a number of options such as using energy to purchase characters and equipment, fielding existing characters (including NPC dice) that will be ready to attack/defend or use energy to pay for global abilities that are printed on a character/action card. All dice that have been used during this phase are moved to a used/out of play area, players will now move to the attack step of the game.

When a player attacks they move some or all of their fielded dice forward to signify which ones are attacking, that player can also use left-over reserve dice to activate special abilities or provide their warriors with weapons etc.

The defender then declares blockers by moving his fielded dice forward, the player can defend with as few or many dice as they have fielded and can use several dice to block a single attack dice.

Any special effects are now taken into account with relevant actions taken; an example of this is if the Bronze Minion Dragon is fielded and uses its breath weapon, the attacking player can pay one energy to deal damage to his opponent and all their characters. 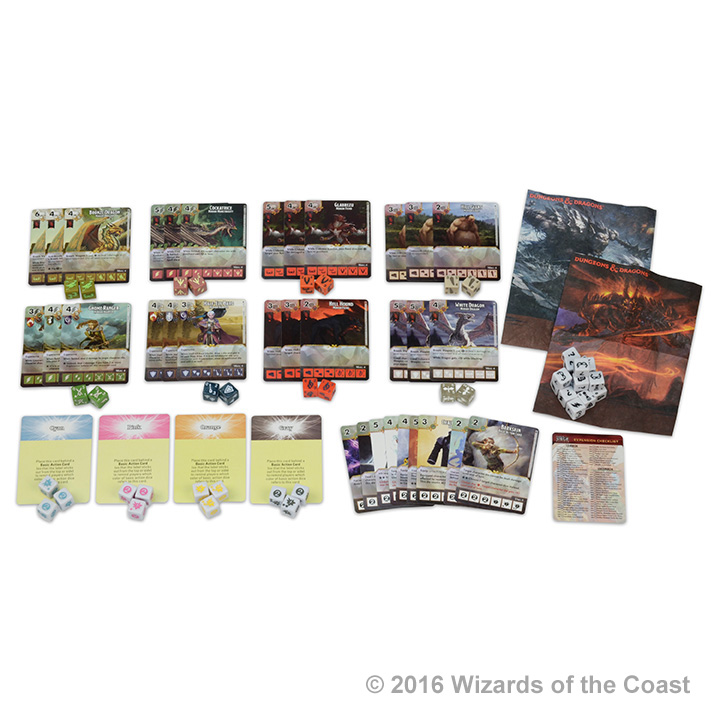 Players will then enter the clean-up step with successful attackers/defenders (during the battle) being moved back to the field area. Unused dice in the reserve pool showing an energy symbol can remain there; all other used dice are move to the used pile before eventually being placed back into the bag to be re-drawn, that player’s turn comes to an end. This process is repeated alternating back and forth between the two players until one player wins.

I need to mention a variant in the game that can enhance a players experience greatly and something that I think WizKids and Dice Masters deserve a lot of credit for. Faerun under Siege is a D&D theme but there are also many other themes that use the same mechanics including Avengers vs X-Men, DC Justice League, Age of Ultron, Yu Gi Oh and many others. The cool point to this is that one player could fight with Dragons and Orcs whilst his opponent is using Ironman and Red Skull. Or even better (if not very thematic), one player can have an army full of gnomes and elves but also includes Superman. The ability to mix and match with the sets is brilliant and certainly adds a lot to the entire series. I personally prefer the D&D sets simply because I like the fantasy theme a lot more despite being a big superhero fan. I also think the art and presentation on the D&D cards are of a higher standard as well. Some companies would have milked every penny out of their customers by purposely designing slight flaws with each set making them incompatible with the others, so credit where credit is due.

I have always been more of a board game fan than a card game fan; I think this is down to the components and strategic elements of board games rather than placing one card under another and battling in this very calculated robotic manner. Faerun Under Siege has completely changed that view on card games for me due to the dice and interaction between the character/action cards. I have always found that adding dice to a game increases the level of fun and due to the randomness also gives the game a longer life span as well as making a player change their strategy throughout the game. 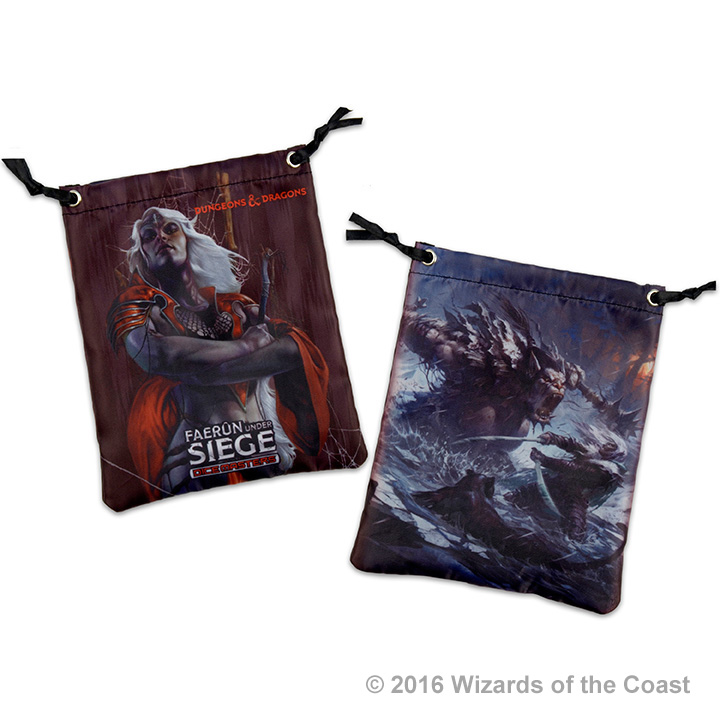 I have already offered my opinion on the dice bags provided but for any semi-serious player of a Dice Masters game I am quite sure that they will have their own bags which cost very little.

What WizKids have done brilliantly is identify the most used components, the dice and cards, which in every way are outstanding both to look at and use. Some of the special ability text can be open to debate but this certainly isn’t a big issue.

In the centre of the rule book is a diagram of a play mat which will massively help players understand where dice must be placed and when. Similar to the dice bags, anyone who plays Dice Masters regularly will have their own play mat whether that is in the form of D&D or the comic series.

The big issue I would have with Faerun Under Siege is that despite advertising as a two player starter set it does not come with enough cards or dice for two players to play a full game. Additional foil booster packs will have to be purchased which in itself isn’t such a big deal, a pack is less than £1 and players can buy a gravity pack which gives them ninety packs at a discounted rate. 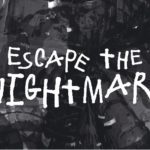 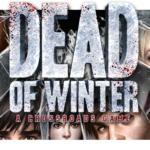