Since its initial release in 2016, Star Wars: Destiny has gone from strength to strength, and if availability of content is anything to measure its success by, it may have even surprised Fantasy Flight themselves as the first wave of cards soon became extinct, which created a bit of a lull within on the Destiny scene. A second and third wave of cards has now followed, as well as a re-release of the first wave to reinvigorate and supplement this collectable card & dice game, and with it has emerged a strong community of player; most board gaming cafes now host Destiny nights, meaning this CCG isn’t going away anytime soon.

Today, however, we are not here to look at the entire Destiny universe, which given the opportunity I’d quite happily do, instead we are looking at a newly released ‘two player game’ which in essence is a two player starter set although it seems Fantasy Flight don’t want to call it that. To keep it short, players did have to buy two starter sets, one for the Heroes & one for the Villains, and now it’s all boxed as one. So let’s find out what you get in the box: 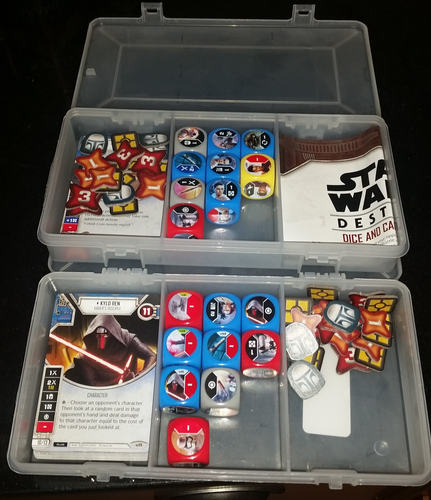 Firstly, the box is pretty substantial considering what it’s designed to hold, which are 48 cards, 16 dice and a few tokens. This seems to be a trend that is sadly re-emerging, whereby the consumer is sold ‘fresh air’ and left to find space on a shelf for something that could have been half the size (such as the original starter sets).

I will go into specifics about the cards shortly, but for now I will simply say that they are all up to the usual FF standard: great layout, great artwork, just a really easy component to play with, and FF have supplied 2 reference cards to remind plays of actions, etc., which is always something that gets my approval.

Next is by far and away my favourite component in the game, and that is the dice. In comparison to most other dice games, these ones are absolutely massive and are made so for very good reason.  Each die has matching artwork corresponding to its card, printed (not stickers like I initially thought) on every face, which for starters just makes them look cool but more importantly helps distinguish one from another in a game where players will roll a lot of dice. Each face also displays the symbol signalling what the player has rolled, which is then detailed on its card. Simply put, the dice are awesome!

There are three types of tokens included, which are damage, shields & resource and are all standard FF components. Destiny is not a hard game to learn as I will explain shortly, so the rule sheet is short but breaks down the game well.

The idea of Destiny (in general, not just this set) is to build a squad of characters up to a 30 point limit; this could equate to several First Order Stormtroopers with a single die each or just Emperor Palpatine on his lonesome but with two dice. The combinations are endless really, with the only restrictions being that you can’t use the same character twice and that each character must be from the same faction, either Hero or Villain. 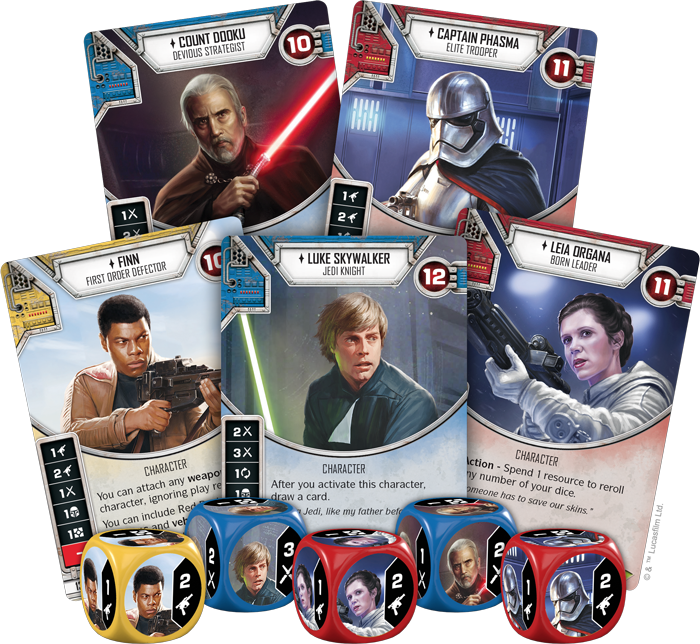 Once your characters are chosen, it’s then down to you to build a deck consisting of upgrades to attach to your characters, such as lightsabers or blasters, Support cards, such as an AT-ST or the Millennium Falcon and Event cards that carry out any number of actions or abilities. A lot of these cards will also bring with them more dice to play with. Decks consist of 30 cards (I know what you’re thinking, there are only 48 cards in this two player set), which players will draw from at the start of each round or subject to various cards played from their hand, which usually consists of 5 cards.

Decks built, it is now time to choose the battlefield, which for me is just one aspect of Destiny that sets it apart from rival games. Each player will bring a battlefield to the table before rolling their character dice, and the player with the highest hit points total gets to choose. Each battlefield will give its own benefit, and included in this set is Obi-Wan’s hut on Tatooine which gives the controlling player shields to protect their characters, as well as the Hangar Bay of the Imperial Fleet which allows the controlling player to draw an extra card that could deal extra damage to their opponent.  Controlling the battlefield is not only important for the card benefits, but the player in control will always go first at the start of each round. We are now ready to play……

Each player takes 2 resource tokens (repeated at the start of each round) and play begins. During a round, players will alternate turns taking 1 action each (some cards allow more) until both players have exhausted what they can do or both players have passed. An action can be 1 of 6 things which are:

Rounds will continue until all of a player’s characters have been defeated or a player has run out of cards from their hand and deck.

The way in which you inflict damage on your opponent’s characters can vary, as can the way in which you can prevent your own characters from taking damage. The majority of characters will have some kind of special ability detailed on their card, for example: Rey’s ability allows her to deal 1 damage if she has shields when activated. Captain Phasma’s ability is to deal out 2-3 damage but requires the ‘special’ symbol to be rolled on her die. The main way to cause damage is to activate a character, allowing you to roll their dice then use those dice results to deal damage to 1 or several of your opponent’s characters. 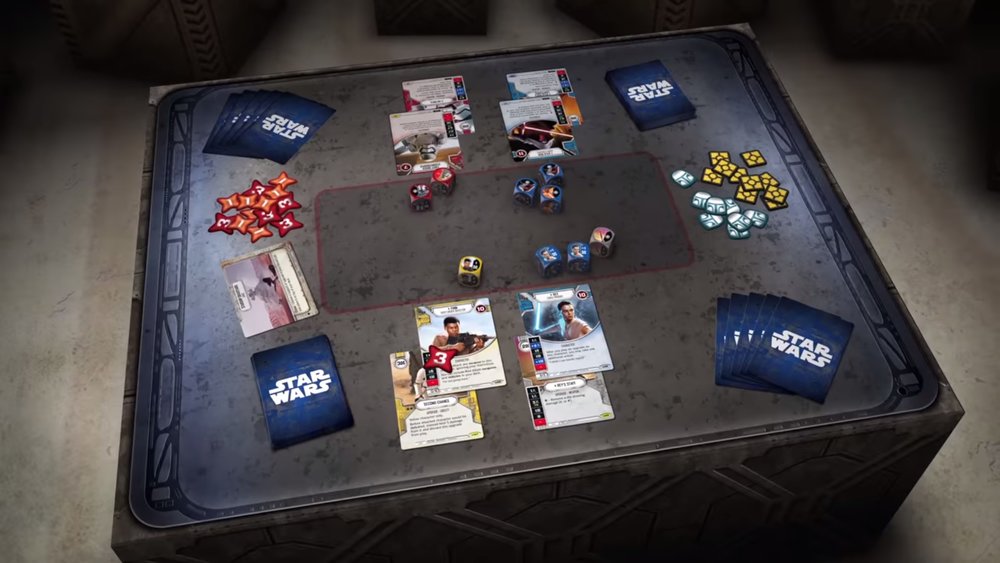 Damage comes in the form of melee and range, and the chosen character will determine which type of damage they can deal. Both are equal to one another but become very important when building your deck and assigning upgrades to a character. For example, Poe’s character dice deal out ranged damage, so it would be more beneficial to equip him with a blaster than with a lightsaber, which is a melee weapon; not too important for a starter set but one of many tactical quandaries that a regular player of Destiny will consider. Event cards can also deal out damage. The Direct Hit card allows the user to increase by 2 one of their die showing damage, meaning a die that was worth 3 damage is now worth 5. The card costs 2 resources to play but could mean the difference between defeating an opponent or allowing them to hit back and potentially winning on their next turn.

One of the support cards in this set that I particularly like is the Droid Commando’s card. It costs four resources, but its dice are full of ranged damage, and its special ability allows them to deal 1 damage to any number of characters, which is great.

The other symbols represented on the dice are:

Set-up for this starter set is really simple as it negates the deck building aspect of the main game as the 20 card decks are pre-built. One player takes control of Rey and Poe Dameron whilst the other controls Kylo Ren and Captain Phasma. 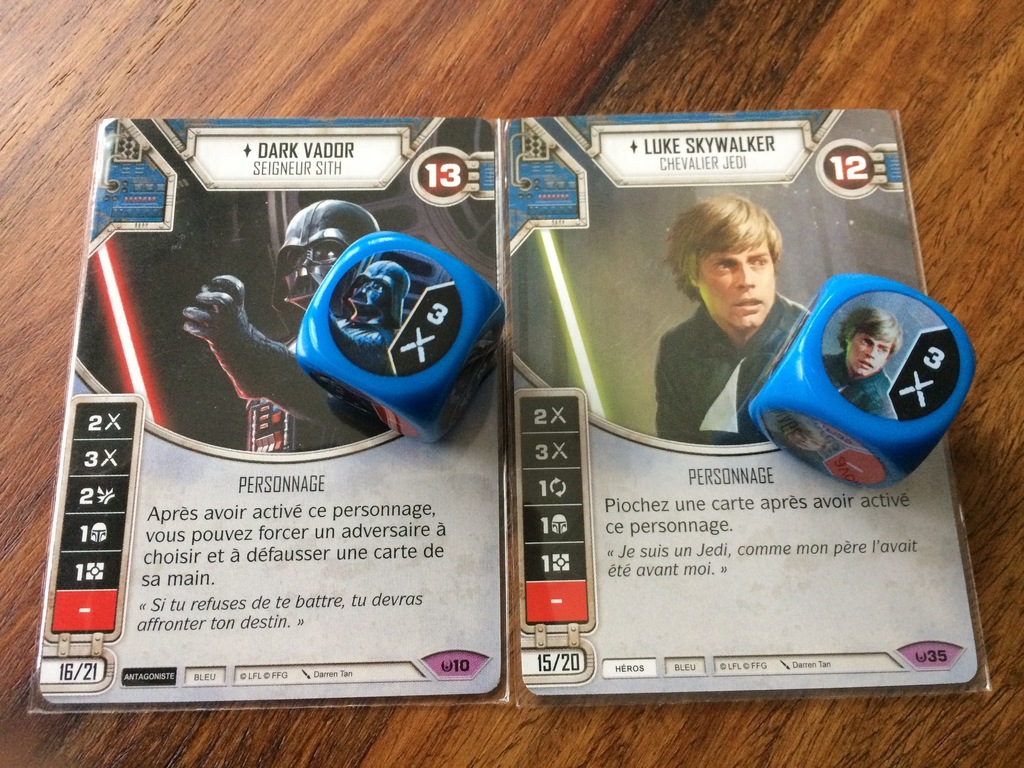 Whilst I really like the idea of pre-built starter decks that will ease new players into the game, I just can’t see past the fact that FF are not giving players a full deck to play with by supplying 20 cards and not the 30 required to play a full game, thereby forcing us to buy the foil packs and supplement this set. I know plenty of companies do this, and I have highlighted it previously, but for God’s sake, just give us a complete game! If we like it, we’ll buy more packs anyway because we’ll want the chance to use Darth Vader or Luke or Han and so on. Don’t sell us 2/3rds of a game with a leaflet inside telling us what we could have if we spend a few quid more.

A second negative point which won’t make any difference to the new players is that the characters included in this set have already been released, as too have a lot of the event cards. Only now FF have tweaked the characters’ special abilities slightly, not overly much but enough to encourage hardened Destiny players to fork out more cash in order to have the new versions of Rey and Kylo Ren, etc.

Rant over. Let’s discuss the game from minus the above points. Star Wars: Destiny is a truly great game, way better than other dice battle games whilst also being easier to learn and relatively quick to play once decks have been built, which of course they already are in this set. Typically, a game will take 30 minutes, although this will lengthen as players become more tactically savvy.

This set contains plenty of variety when it comes to upgrades and support cards, so several games can be played before taking the plunge into collecting Destiny, which as with all CCGs comes at a hefty price, yet we still do it.

If I were looking at the entire Destiny universe, then my score would be somewhat higher as I absolutely love this game. It’s so fun to play, has fantastic components and is just a joy to roll & re-roll those dice. Added to this are the numerous ways of playing and winning. Destiny is not just a ‘you rolled lucky’ game, it’s about building and customising your decks, adding the right upgrades to characters and saving resources for those game-changing support cards. You could choose heavy-hitting characters to really go for your opponent quickly or choose characters that are strong with the Force and manipulate their every move. Destiny is such a tactical game, and this set offers a glimpse into it.

To buy your own copy of Star Wars: Destiny, visit Esdevium Games or look for your local games store HERE. 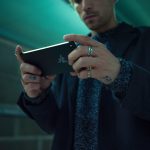 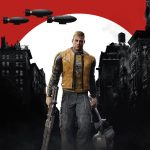