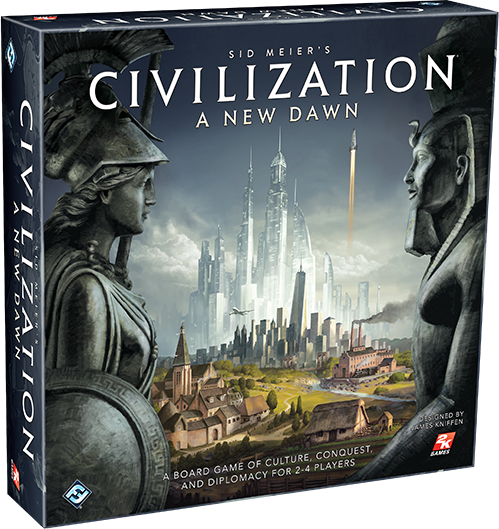 Today’s review is yet another huge video game that has since evolved into a successful board game, although this version is (I believe) the third such variation of it and possibly the most different. For years I’ve played Civilization on the PlayStation and PC and absolutely loved the game, literally losing hours sending settlers out, building Wonders, nuking my opponents and ultimately failing at the space race. How then can designer James Kniffen and publisher Fantasy Flight Games fit such an experience into a game they say can be played in as little as 1-2 hours? And I can vouch that you can play this game in an hour. Let me tell you how.

Sid Meier’s Civilization: A New Dawn is a 2-4 player game played on a modular map that is made up with 16 double-sided map tiles, each consisting of 10 hex spaces that depict the typical Civ terrain, such as grassland up to mountains. Also on the tiles are neutral city states, natural wonders, resources and barbarian spawn points. As is expected with FFG (Fantasy Flight Games), all these symbols match perfectly with other components in the game, such as focus cards, victory cards, tokens and the rulebook. I won’t go into depth with the components, but it’s safe to say that they all stand up to the usually FFG quality, this includes the rulebook that is perfectly written with plenty of coloured diagrams throughout and a quick reference guide at the back. You also get little city and caravan minis instead of tokens, which is pretty cool. 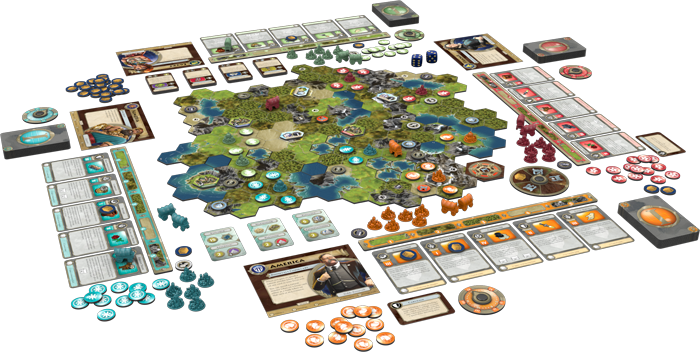 I have already alluded to the fact that this game can be played in as little as an hour which, for a Civ game, would have been inconceivable. This can be achieved by a very quick, slick and well thought out mechanism centred on the player’s focus bar and focus cards. Each player, regardless of which Civilization they choose to use, will be given the same 5 focus cards with which to begin the game. These focus cards are placed in a row underneath the focus bar and are numbered from 1-5, 1 representing grassland and moving up to the most powerful spot of mountains.

This system is the core mechanic of the game and is used to build new cities, increase trade, raise your tech level (which upgrades focus cards), expand your borders (control tokens) and fight opponents and barbarians. This is what makes the game so quick and easy to play as it abstracts a whole chunk of the usual Civ tasks, such as placing/moving troops or building tech trees.

The focus cards act as an action that a player will take on their alternating turns and once used are removed from their current spot on the focus bar and placed down to the number 1 spot, bumping the other cards further up the bar ultimately making the power of the card just played weaker and all other cards stronger for future turns. For example: the Early Empire card allows the player to place 2 control tokens on the map matching up to the terrain slot of which it is placed on the focus bar. If this card is played whilst at level 1, then the player is limited to only placing their tokens on grassland spaces. If, however, the card is played whilst at level 5 (mountains), then the player can place their tokens on any free space on the map making it a lot more powerful and flexible. 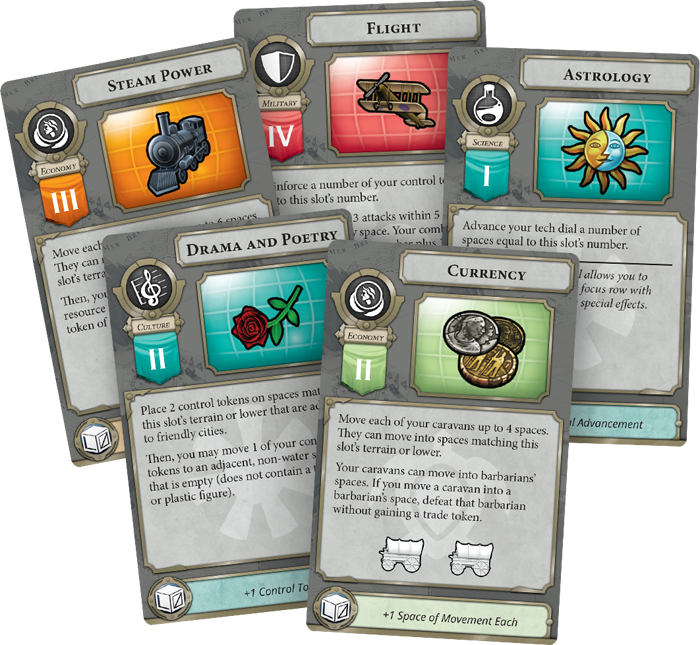 Combat in Civ is also massively simple and easy to work out. The attacking player will activate the masonry card, take the number slot it was under on the focus bar and add any bonuses from advanced cards or Wonders that they have built. The defender uses the terrain value of its token being attacked, adds their own bonuses in the same manner as the attacker which will give both a total number. Both players will then roll a die each and add that number to their total; if the attacker has a higher number than the defenders, then they win and either removes their opponents’ control tokens, conquers their cities or kills the barbarian. The focus card itself will determine how many attacks can be made, as well as how close the attacker has to be to the defender in order for them to activate that card.

Resources are used in conjunction with the pottery focus card to build World Wonders; again, the player will use the focus level of the card and increase its value by spending resources until they reach the Wonder cost. Wonders are built in cities and are limited to one per city. Depending on which type of Wonder you build will determine the benefits given by it. For example, the Ruhr Valley modern Wonder card will increase the player’s combat value by 5 due to it being a military-type wonder, whereas the Eiffel Tower will allow the holder to tamper with opponents’ control tokens due to it being a culture-type Wonder. There are four different types denoted by colour with the ancient Wonders being available at the start of the game and progressing through to the more powerful modern Wonders.

When the trade focus card is played, it will allow the player to move a caravan an allotted number of spaces from their capital or a mature city; a city is classed as mature if all adjacent land spaces are controlled by that player. Sending caravans to opponent cities or neutral city states allows players to collect trade tokens which can be used to affect some focus cards and helps build Wonders. Establishing these trade routes can also give the player diplomacy cards which can have future advantages when it comes to dealing with that player later in the game, such as increasing your defensive value etc.

The fifth focus card is the astrology card which simply increases the value on your tech dial as per its focus bar value, which in turn allows you to upgrade your focus cards to their more powerful equivalent.

Barbarians played a fairly big role in the video game, especially early on in the game, whether that was in a positive aspect of killing them and claiming a reward or a negative one whereby they destroy your cities. They play an identical role in A New Dawn and can either be farmed for trade tokens or walk right into an undefended city and remove it from the map. Their movement is controlled by an event dial which, at the beginning of each turn, will instruct players to either spawn new barbarians (replace the defeated ones back onto the board), move barbarians or collect trade tokens for each mature city. To move barbarians, one player will roll a die, the number of which will correspond to a direction on the direction token which is placed next to the map during set up. All barbarians then move 1 space in that direction, resolving any effects immediately.

The game comes with 5 victory cards, each of which has 2 victory conditions on it. At the start of the game, 3 of these cards are dealt face up giving players 6 victory options. For a player to win, they must satisfy 1 option from each of the 3 cards, which could be build a certain number of military wonders or have so many cities on the map and so on. First person to do that at the start of a round wins. 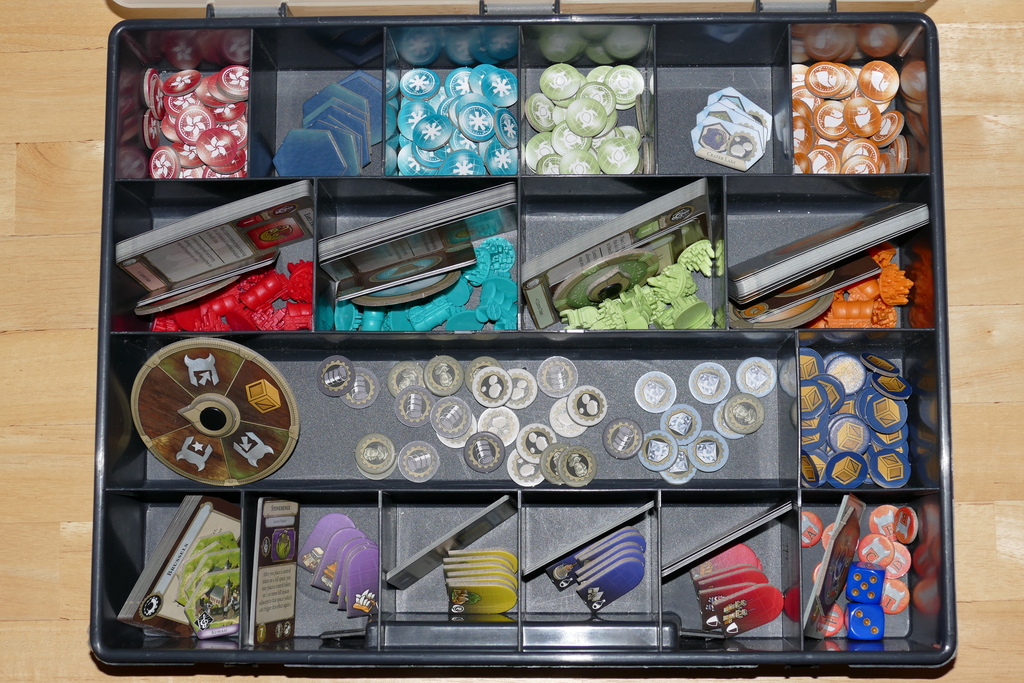 There are a few things that I want to discuss before going into my summary: Firstly, set up can be a bit of a chore sorting through cards and arranging the map with all of its tokens, etc. Don’t get me wrong, it’s no Axis & Allies, but it’s also a much lighter and faster game than A&A but can still easily take 20 minutes to build.

Secondly, the rulebook states “act as the leaders of history’s most memorable civilizations”, yet there’s no leader card for Great Britain! What the actual…a civilization that ruled 25% of the world’s population and was nicknamed ‘the empire on which the sun never sets’ due to its size. Come on, FFG, it’s in the name, for heaven’s sake!

For the 8 leaders that are included, they all have unique abilities that can really be felt in-game. Some will make trade routes easier to achieve, whilst other’s will reward an aggressive expansionist. A nice touch, but I feel that this could have been enhanced with individual focus cards instead of the generic ones for each of the 4 players.

The focus bar/card mechanic is outrageously good and such a clever way to add more strategy into an already strategic game. During the game you will literally be desperate to play the pottery card, for instance, because you need to build a city in a strategic space, but that space is a mountain, and pottery is only on level 3, meaning you have to play the 2 higher cards just to get pottery to level 5. It’s so frustrating and can feel like you are wasting the other two cards, but it makes you plan ahead a whole lot more. It also makes the game move along extremely quickly as a player is simply playing 1 card on their turn, then the next player plays 1 card and so on. The game even allows players to choose upgrade cards as other players are taking their turns instead of the game coming to a halt whilst you decide which card to take. 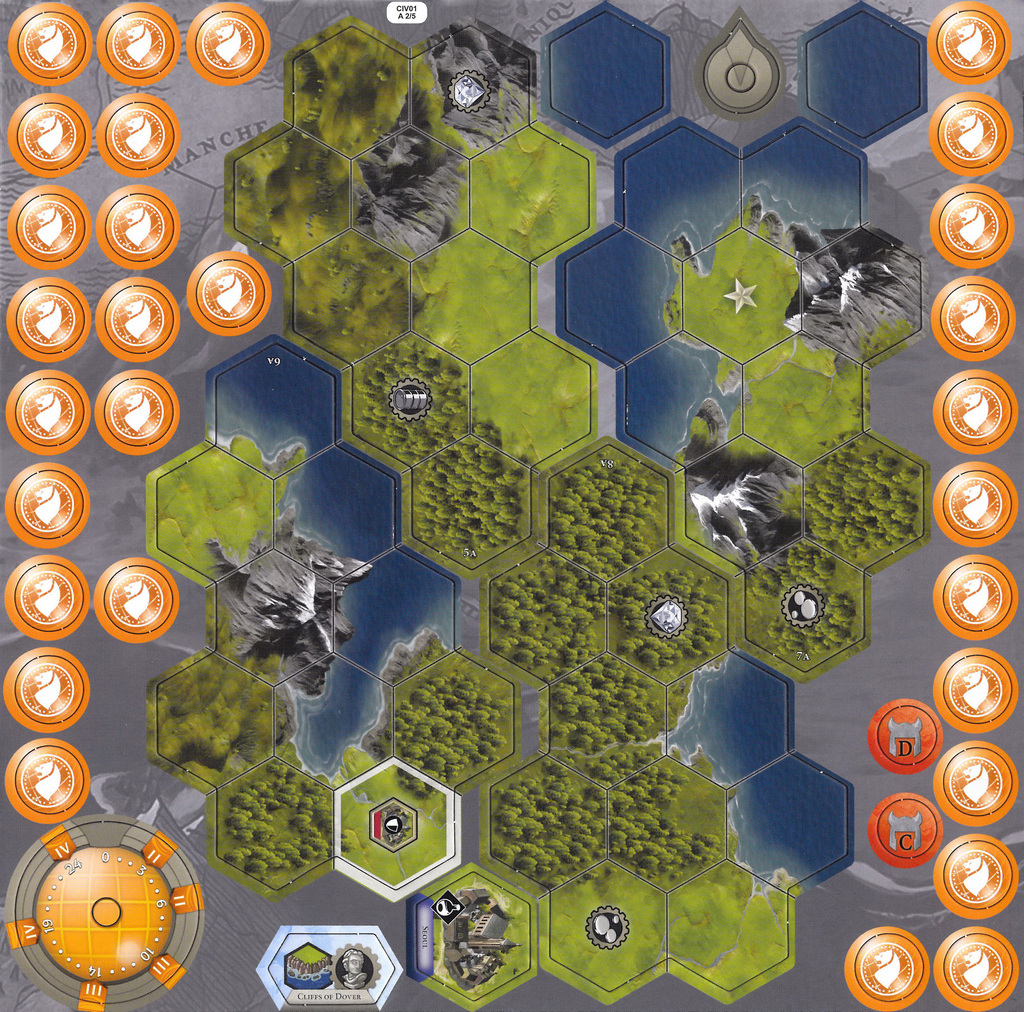 Also, it is entirely possible (I can attest to this) that players can go a full game with zero player interaction, especially in a 2-player game. Sometimes players will not need to fight or can trade with the neutral city states, meaning you are literally just building your empire in your own little corner of the map. I’m not saying this is a good or bad thing, but it’s something to consider, at least.

Due to the focus bar, however, and the abstract nature of things like combat, I think ‘hardened’ Civ players might struggle to accept A New Dawn as a legitimate successor. No military unit or coins or space race or tech cards, combat is simply a generic coloured token vs a different generic coloured token, not to mention the play time. My second game of this took 60 minutes, which is incredible when you think of the IP.

The reverse argument to that is, however, that I feel A New Dawn will introduce a new audience to the world of Civilization due to it being a much lighter and engaging game. People who would have been put off by a 30-page rulebook can understand this one in 16 pages, a lot of which is illustrated. Some people might like the idea of Civ but would never consider playing a 4-hour board game. How about an hour long game instead?

If you would like to purchase your very own copy of Sid Meier’s Civilization: A New Dawn, visit HERE or find your nearest game store HERE 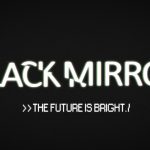 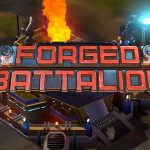