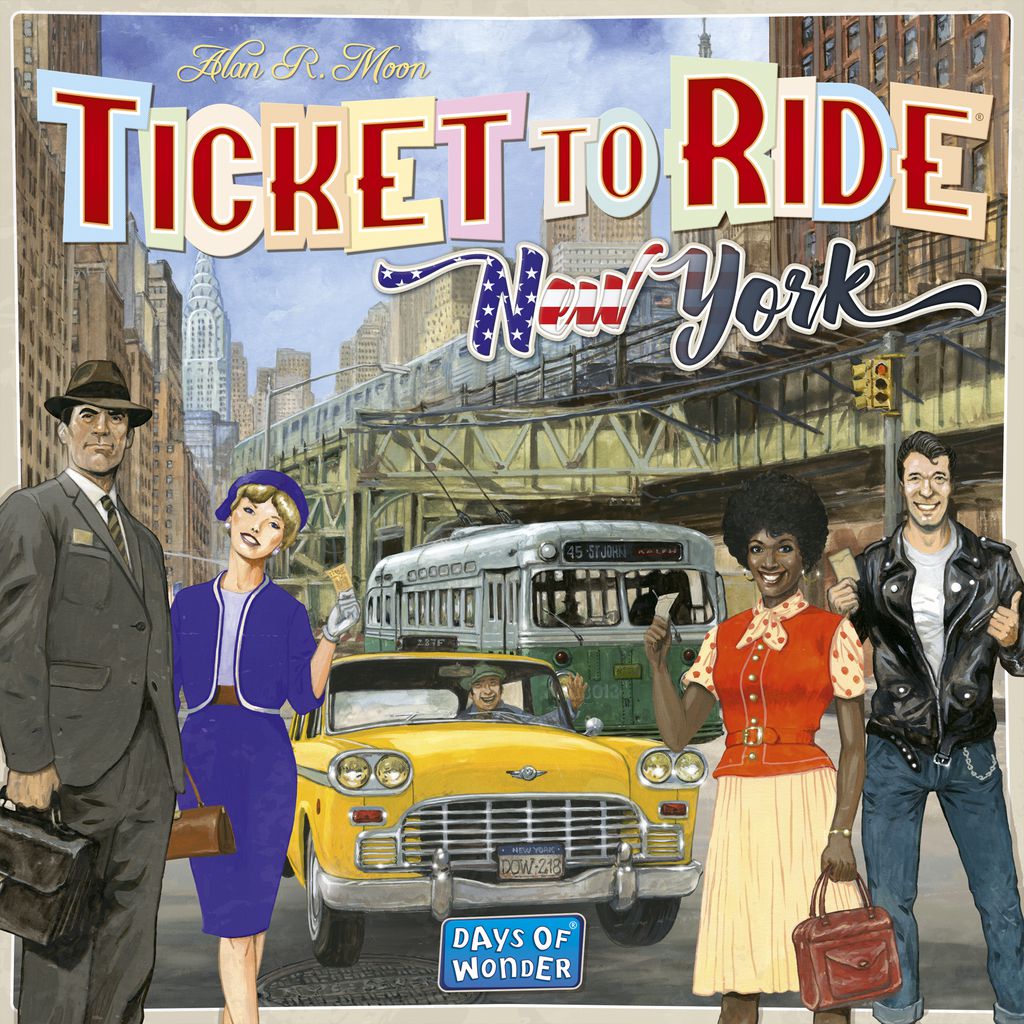 This review is for one of the most beloved, well thought of, and endearing board gaming franchises out there and may well be, on many occasions, a ‘new gamer’s’ first experience of the hobby. With its original release being almost 15 years ago, it has been followed by a great many variants, making Ticket to Ride a true classic. Newest to the list is Ticket to Ride: New York which switches the usual steam train travelling through the open country to the life of a cab driver in the hustle and bustle of the Big Apple. Let’s take a look if it’s worth the fare or if we should be calling ‘taxi’ for this aging icon.

From the outset, I’ll admit that I have been pretty much done with Ticket to Ride for a while now, which doesn’t mean that I don’t like the game, it’s just that I’ve played it so much that I am a little burnt out by it. When I first saw Ticket to Ride: New York, I also immediately thought: ‘Do we really need another Ticket?’…. I’ll come back to this point later in the review. 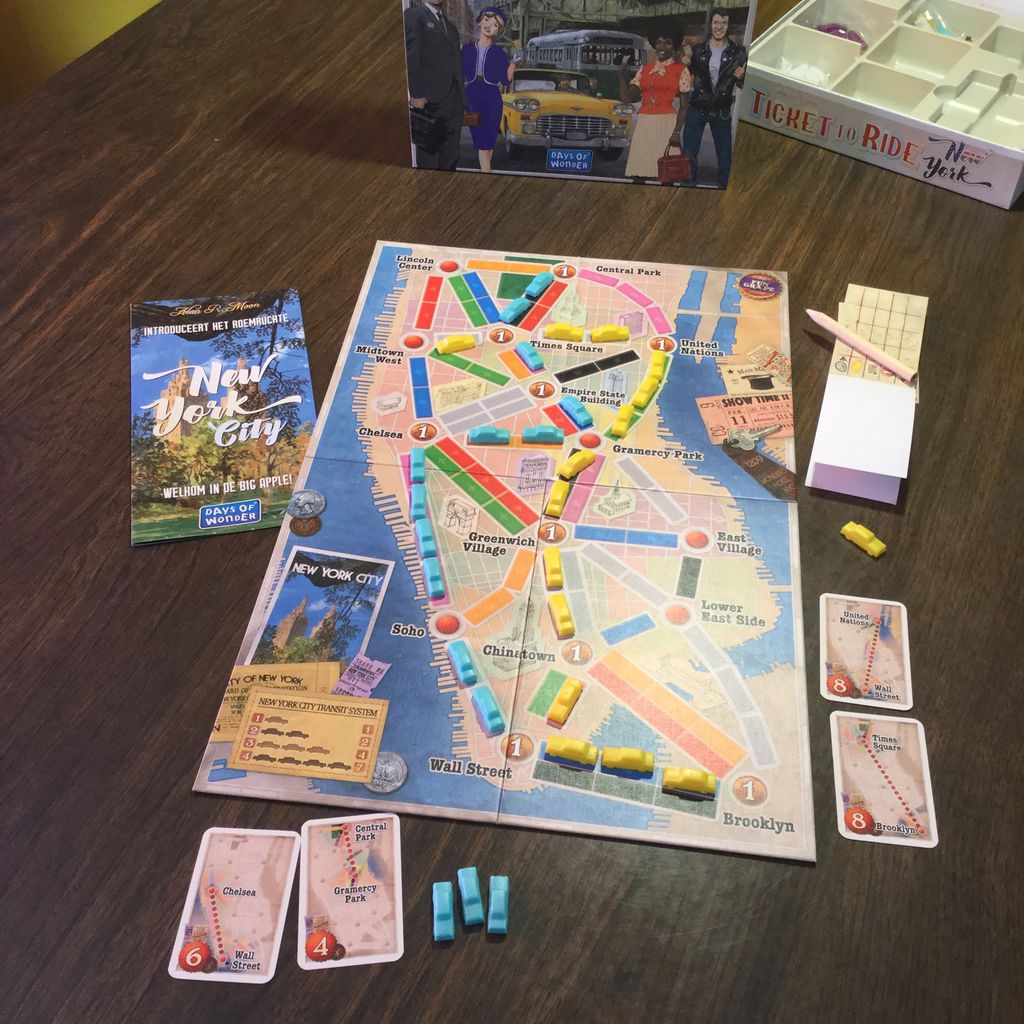 The first thing that struck me was how small the box was in comparison to its predecessors; the box art is still gorgeous, which has been consistent throughout the series and something that publisher Days of Wonder should be credited for. The board too is tiny in comparison to previous ones, maybe a quarter of the size with a distinct lack of routes to play for and only 15 plastic taxi pieces per player to claim said routes. This will be a short game, 10-15 minutes by the box, which also states 2-4 players.

The aim of Ticket to Ride: New York is to collect various sets of coloured transportation cards that, in turn, match the colours of taxi routes on the board connecting famous city locations, such as Wall Street to Brooklyn or Times Square to Central Park. After completing a route by discarding a set of cards and placing your coloured taxis on the board, players will score points depending on the length of the route. At the beginning of the game, players will be given destination cards, meaning that they must connect one location to another, which in turn will score them extra points should they achieve this or negative points if they fail. At the end of the game, points for routes claimed and destination cards completed or failed are tallied up, and the player with the highest score is the winner. 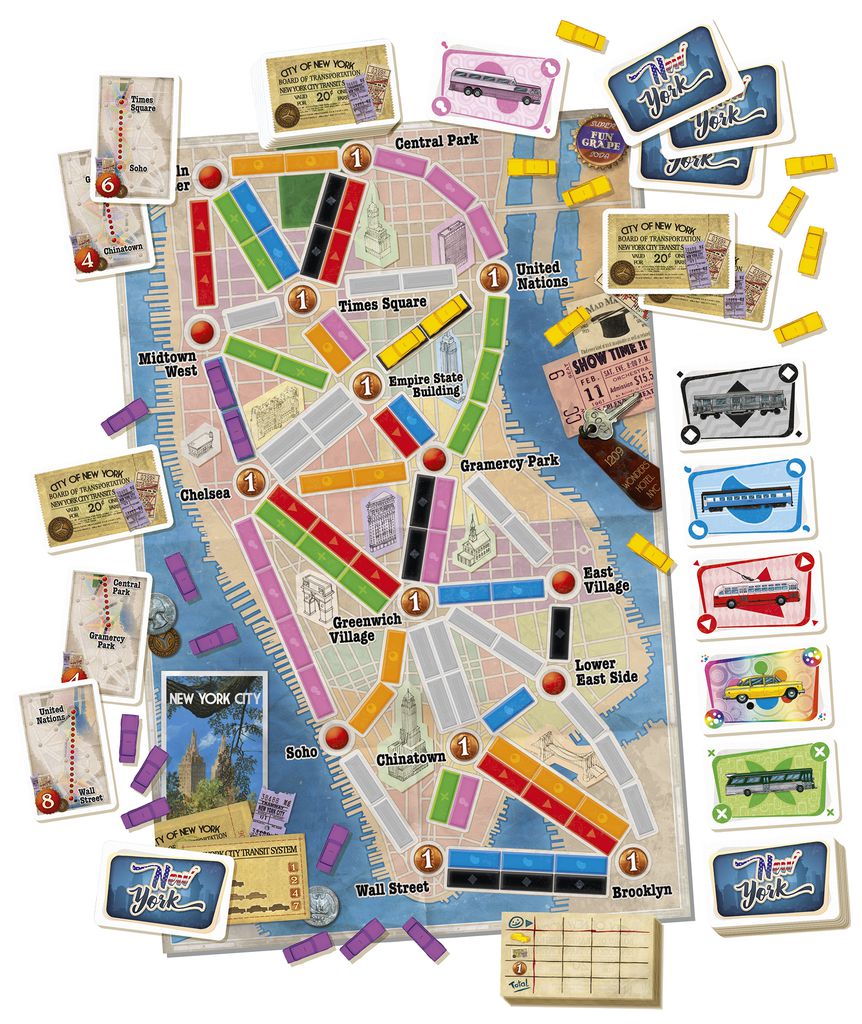 On a player’s turn, they will carry out one of three actions which are: draw two transportation cards into your hand, either from the five face up cards available to all players, or drawing blind from the face down deck. The exception to this rule is if a player draws a multi-coloured taxi card from the face up pool, in this circumstance the player may only draw that card as it counts as a wild card, meaning it can be used instead of any of the other six coloured card types.

The second action a player can choose to take is to claim a route, which they do by discarding the necessary number of transportation cards for that route before placing the same number of their taxis on the board, scoring between one to seven points. Once a player is down to their last two taxis or less, it will trigger the final round of play.

The third action available is to draw two extra destination cards that may afford the player more points at the end of the game, should they be fortunate enough to complete these routes. 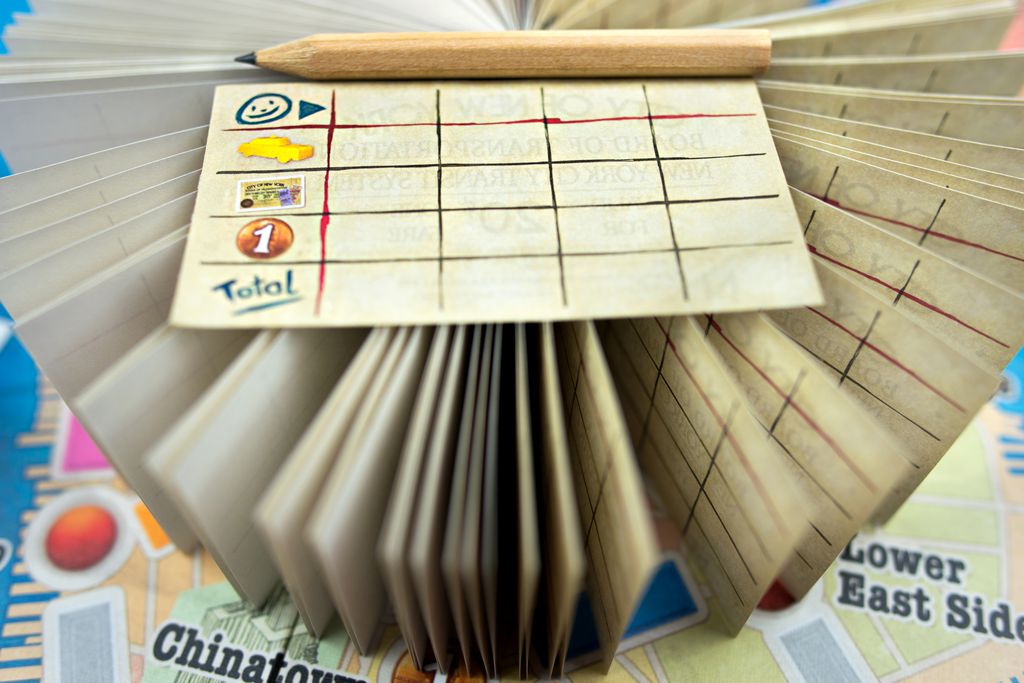 That was a brief description of gameplay, although in fairness there is little else that I could explain as Ticket to Ride, at its core, is a mega simple game to teach and play, so I will offer a few observations before going into my summary.

Firstly, this game is so small and quick that two adults will struggle to make the game last 15 minutes. As with all Ticket to Ride games, it is extremely easy to teach New York, especially given its size and game length, although this is where the strategic levels of the game suffer hugely. Earlier in the review, I mentioned that I believe previous Ticket to Ride games to be gateway games, but I do understand that there is a deeper, more involved strategy game for hardened Ticket players. New York, however, is not for those people, although the game does have one extra scoring method as your routes can now pass through tourist attractions which each score one additional point at the end of the game. It’s still not enough!

Add this to the fact that the original game or the version that my family and I play, Ticket to Ride: Europe, is equally as easy to teach, with my children having been able to play it independently from an early age, I started to ask the question: ‘Who is this game really for?’. 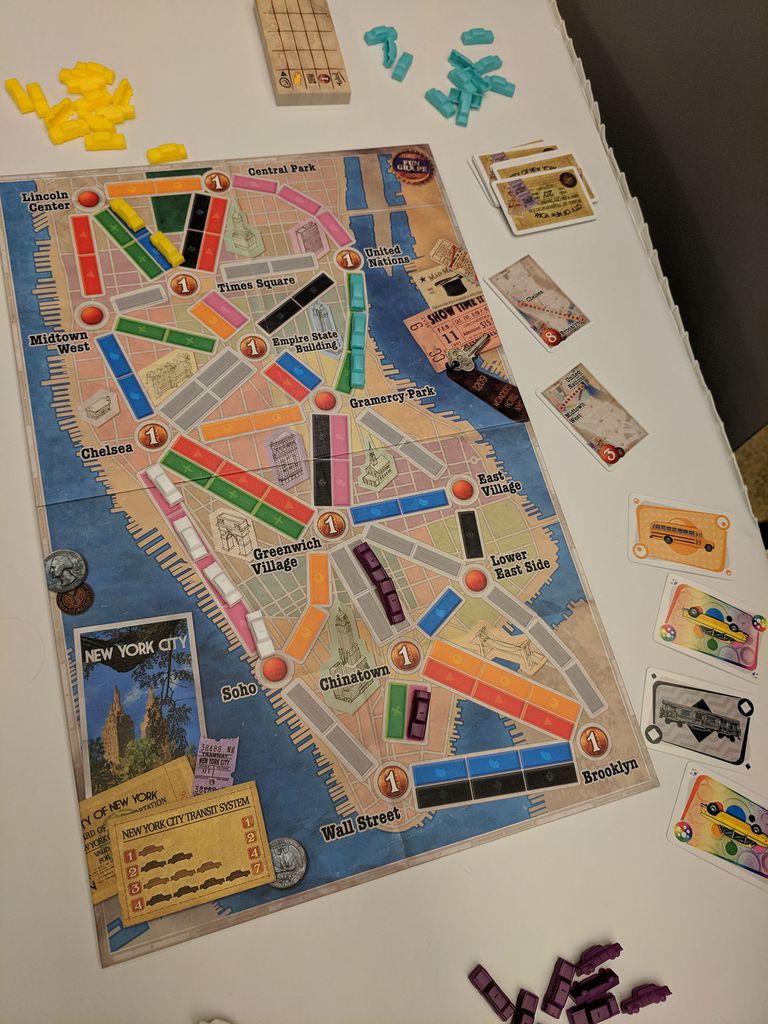 I will play this game again but definitely not with another adult as there is just not enough to it in order to keep me interested. I’m also not sure what the right number of players would be for it as a two-player game is too easy to achieve your destination tickets by simply staying out of the way of the other player who can’t really afford to block you due to such a short time in which to score points, but a four-player game is just super random.

To be fair, New York is ideal to keep children entertained and provides the same experience for them as an hour-long game of Europe does. So, does that answer the question of who this game is for? I’m not sure that this was Days of Wonder’s intention, but I think it may be true all the same.

Just looking at my score, you may think I do not like Ticket to Ride, but that couldn’t be further from the truth, I just can’t see why we need this version of it. It doesn’t replace Europe or USA, and there is already a dedicated children’s version called First Journey. I would hate to think of this as Days of Wonder simply churning out Ticket games for the sake of it, but with New York they appear to be well and truly running out of steam, or should that be petrol? I’m so confused.

For more information on Ticket to Ride: New York and more, visit Days of Wonder or Asmodee

If your aim is to introduce children to tabletop gaming, then I would recommend Ticket to Ride: New York; otherwise, I can’t see why you wouldn’t buy one of the many other larger versions of what, in essence, is a truly great game. For me, New York was just too quick with not enough strategy required to make it enjoyable. 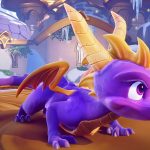 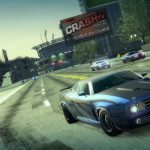