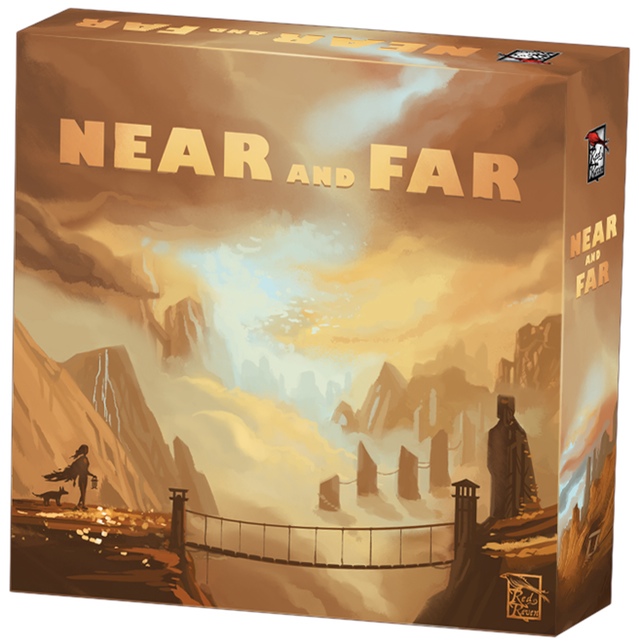 With my latest review, I will be doing something slightly different than usual by looking at a game that is now over two years old. A game that despite wanting to play on release, it kind of got lost (for me) in the sheer volume of extremely good games released at the same time. So, when I was given the opportunity to review Red Raven Games’ storytelling exploration game Near and Far, designed by Ryan Laukat, I jumped at the chance.

Near and Far is a 2-4 player game that is set in the same universe as Laukat’s previous game, Above and Below and actually comes with components that are compatible with that game. A single game will typically take between 1-2 hours, and it can be played in multiple formats, such as a one-off arcade mode or a fully-fledged campaign. 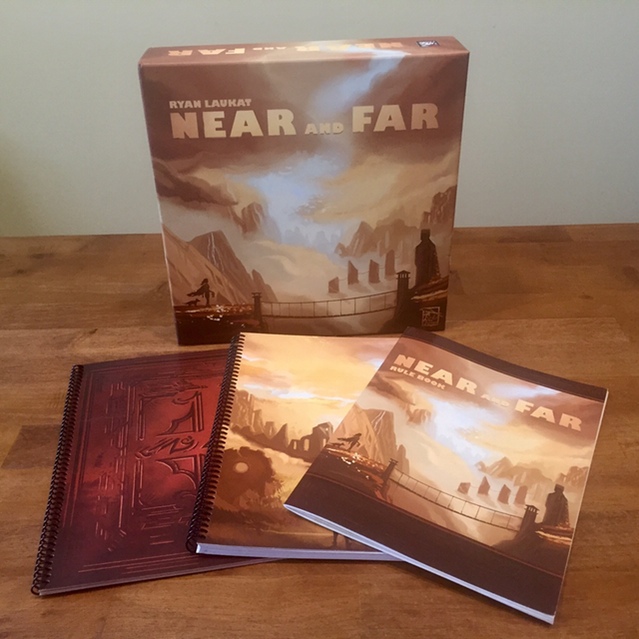 The objective of the game is to score the most journey points at the end of the game, which is also when they will be scored, and this can be done in a variety of ways, including fighting threats on the map, completing quests, collecting NPCs and faction banners to claim a faction chief, establishing trade routes, as well as many others. Players must traverse the map, making camps with their tents, which cost hearts to put out but in turn will produce more rewards and make it easier to move from space to space.

At the start of the game, each player will be given their own player board, an animal companion, a number of artefact cards and a character standee, which for the main part are purely cosmetic and are exactly the same as one another, unless you play the character mode, which then allows you to differentiate your character.

The player board acts as your ‘game organiser’ and will be where the majority of your attention will be focused. On it is where you store your 14 tents, your adventurers, pack animals, your gems, food and coins, treasure cards and also where you will keep track of how many move points and hearts a player has at their disposal. 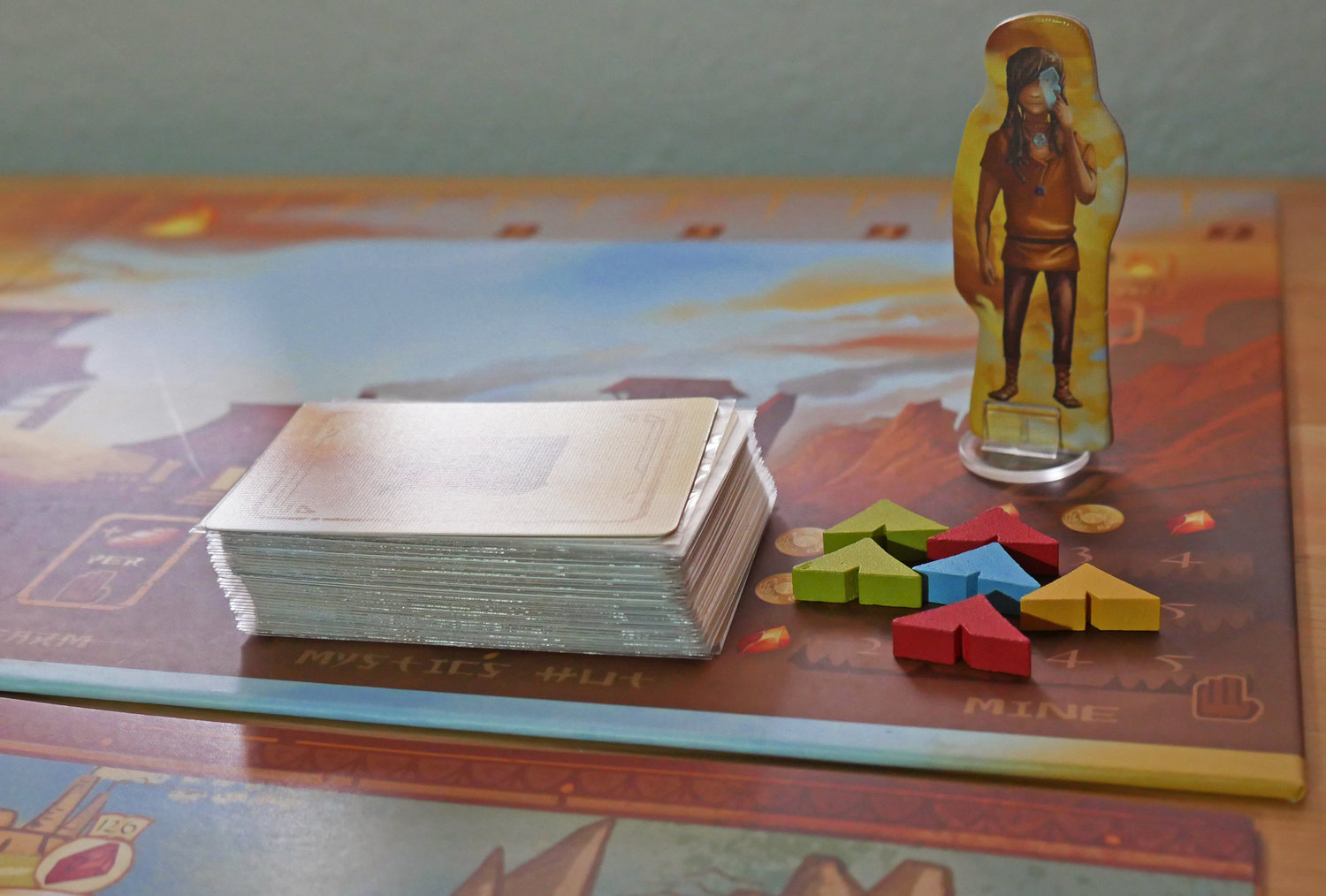 Adventurers are NPCs within the game that players can buy using coins, and once bought they will provide the player with a boost in stats; these stats are skill, movement, combat, search and hearts. Each adventurer is also part of one of four factions, which can have relevance to how you arrange your adventurers during the game, as well as to scoring at the end of the game.

Pack animals can be bought using food, and once on your player board, they will give the player extra movement and can also be used as a sacrificial lamp in order for you to avoid threats on the map, should you choose to do so. Having a pack animal will also let you collect treasure cards, which will give that player a special ability or allow them to score more points. 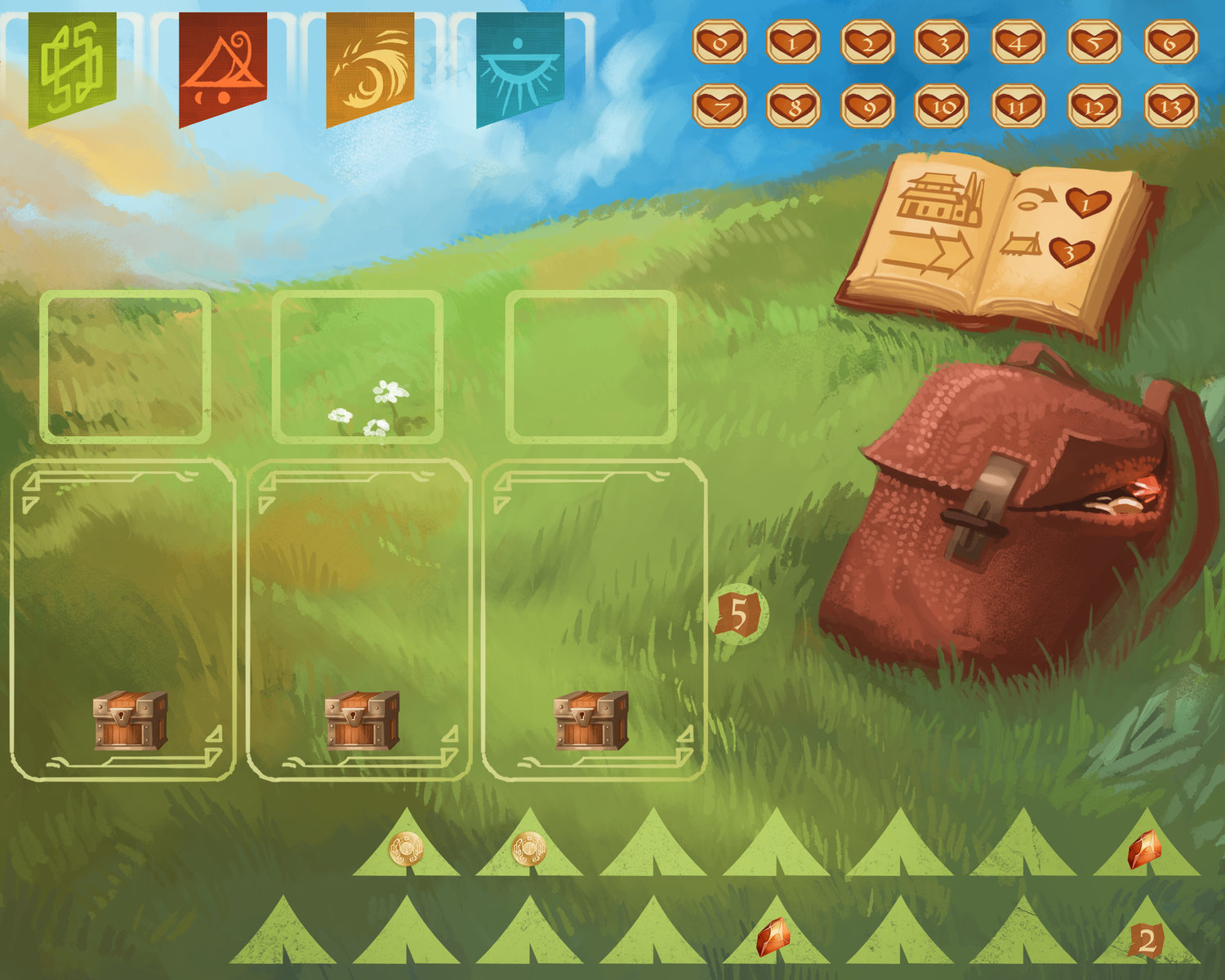 Each player will have a hand of artefact cards, which can be unlocked at any time during the game by fulfilling the cost requirements on each, and they will provide ongoing upgrades once unlocked, such as extra combat points, for example. The cost could be in the form of one of or a mixture of coins, gems, food or faction tokens and will again provide more journey points.

On a player’s turn, they will either visit the town board or adventure on the map: In the town, players can acquire/exchange goods, adventurers, treasure cards and so on from several different locations, such as the saloon, mine or general store. Basically, the town acts as a preparation point before the adventure begins.

When a player chooses to adventure, they will place their standee on the town symbol on the adventure map. From there they will follow pre-determined routes, which will contain places to put out tents, unlock resources, fight threats, establish trade routes and complete quests. This is where the majority of your point scoring will come from, so even though it’s nice spending your time in the town stocking up on helpers and resources or unlocking artefact cards, it is always just the prelude to the greater game, which can’t be neglected. 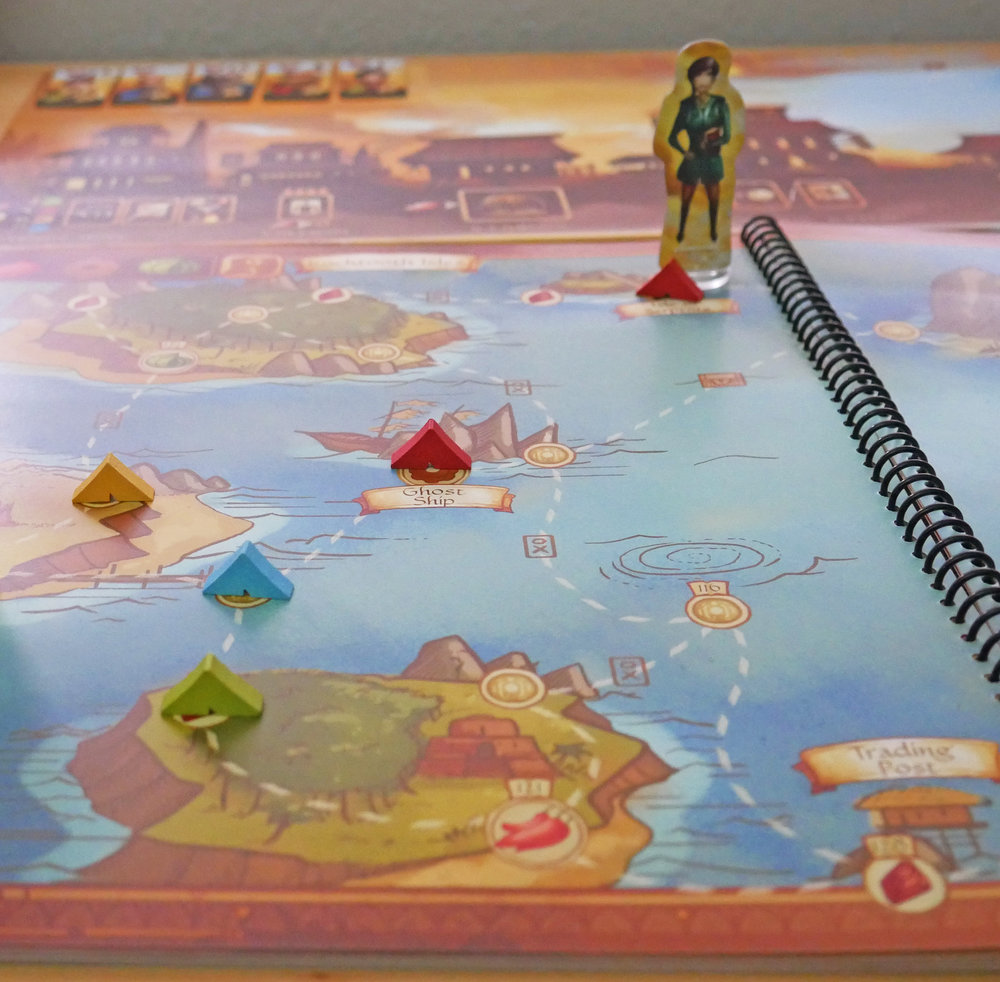 Quests are one of the coolest aspects of Near and Far, if you’re playing the campaign variant of it: This is due to a rather sizable storybook that will provide players with extremely well written narrative and choices to be made. An example of this is you might encounter a beggar at the side of the road and be given the option to give him some food or rob him for the little that he owns. Your decision will have immediate consequences and rewards but may also come back to haunt you later on in the game. If you’re playing the arcade variant, then quest cards will take the storybook’s place, providing the same rewards but without the narrative and, ultimately, theme.

Threats come in the form of cards, which as you progress through the game will become harder to defeat but will offer a larger point bonus, should you manage to do so. You must fight a threat if you travel from one empty space to another, running through the threat symbol in between. To defeat a threat, the players must add up their combat strength before rolling a die, adding the two scores together and hoping it equals or exceeds the threat value. Should players defeat it, then the player places a camp on the card ready to score at the end of the game. 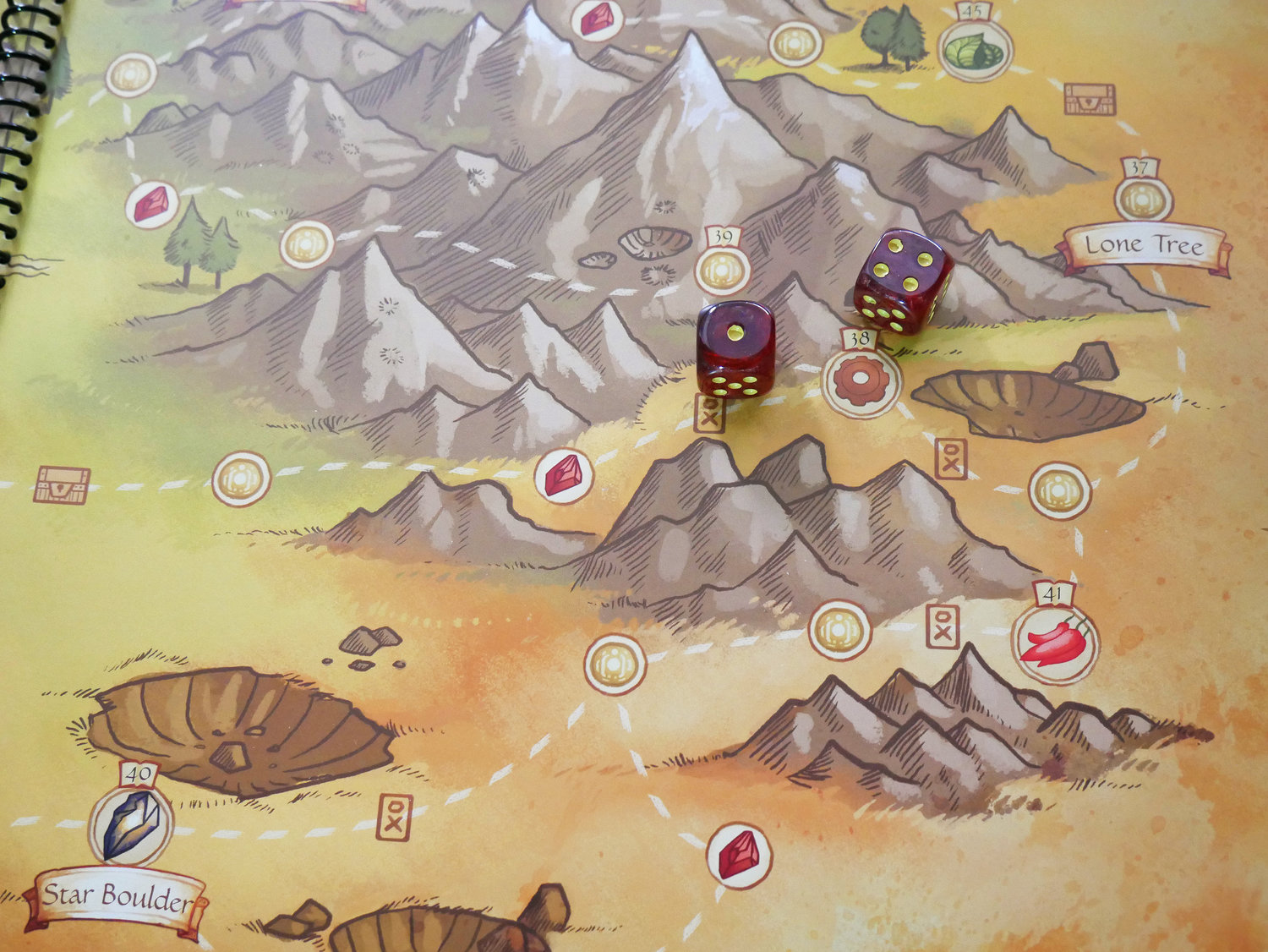 That’s the game. Let’s look at some of my observations of the game starting with the theme, which in all honesty is pretty thin; however, how many games featuring these mechanisms have a really rich theme? Not many, to my knowledge, so not such a big deal and also the end of my negative points.

As far as positives: The production of Near and Far is great, the rule book and campaign book are extremely well written, and the atlas book containing all the maps is a fantastic idea.

I love the dynamics between the town and the adventure map; planning your turns, visiting the town, collecting valuable resources, adventurers and animals, upgrading your movement and hearts to allow you to move quickly across the map while getting rid of those tents. 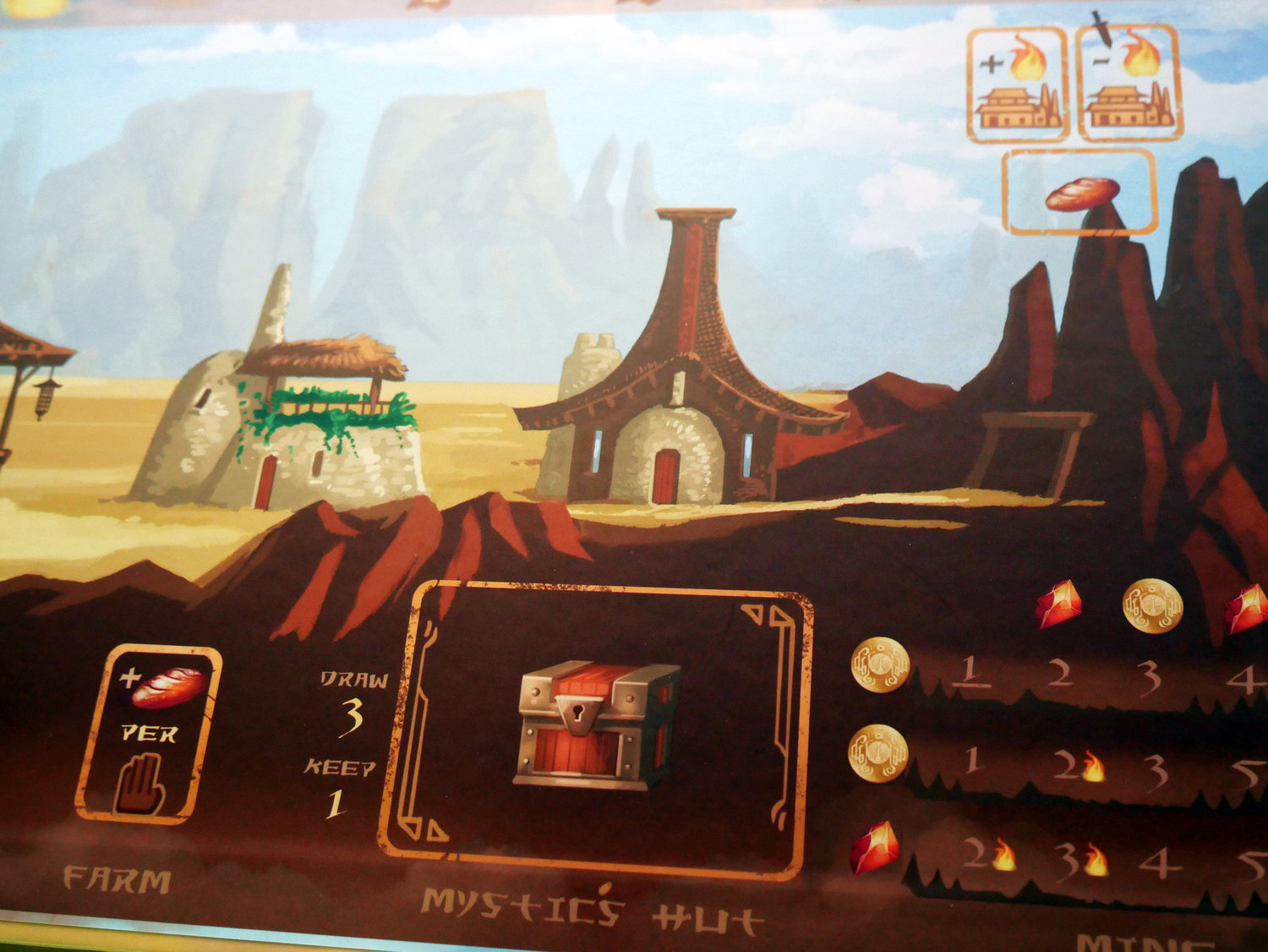 Finally, and probably Near and Far’s strongest point, is that replayability is massive. This is partly due to the four differing game modes, but mostly because there’re so many ways to score points in this game that it allows players to follow various routes from game to game. If you want to explore the map to capturing trade routes or making sure that you have the most animal and treasure cards, you can. You can focus on claiming the four faction chiefs or sprint to the endgame by getting your tents on the map as quickly as possible. In one particularly enjoyable game, I was able to unlock artefact cards almost immediately, which turned my character into an absolute tank by upgrading her combat, meaning I spent all game looking for and defeating the threats on the map, which earned me a ton of points at the end.  Due to changes in maps and some win requirements depending on the game mode, players will certainly not get bored of playing Near and Far.

If you would like to purchase your own copy of Near and Far, check out ASMODEE or find your nearest games store.

Near and Far manages to combine a euro points salad game whilst giving players a real sense of adventure and character building that is rare in this genre of games. Good quality production and a huge replay factor prove why Near and Far won’t be leaving our tables anytime soon. 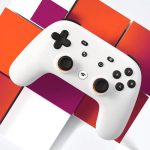 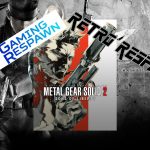