Doom was my very first experience shooting in first-person. The moment I slipped it in my Sega Megadrive (or Genesis in the US) I knew I was in for a gory, brutal, yet challenging adventure. I don’t know whether it was the cracking metal inspired soundtrack, the intimidating demons, or the dark and dingy levels, but I had the time of my life. Doom was unforgettable thanks to its relatively normal seeming arsenal of weapons evolved into a super shotgun, plasma rifle, and of course, the BFG, all of which helped blast the demonic hordes with my character’s face reacting to every shot on the bottom of the screen.

Well, after Doom 3 brought the famed series up into the modern era, developers id Software have brought it into the new generation with a straight up remake simply titled Doom. Doom fans, like me, had high hopes for this new game. We wanted it to give us the very same feeling we got when we first played the original. A similar story, locations, gameplay reminiscent of the original whilst at the same time, feeling new and refreshing.

Doom’s premise sees the player as an unnamed soldier who awakens to find himself imprisoned by demons. You wake on a strange bed, chained down. It takes no effort to break free, find some armor and bad-ass weaponry before finding out some crazy doctor has activated a portal to hell unleashing demonic hordes upon a research lab facility on the planet Mars. It’s down to you to stop her and rid the red planet of the hellish threat. There’s not much here in terms of story telling but it’s enough to give you reason to progress. Voice acting and narration is actually really good thanks to the constant communication from facility director Samuel Hayden. It’s a far-fetched plot, but that’s why we loved it so many years ago. It’s no different here. Gaps and backstory can be found via the collectable memos scattered around each level if you really want to dig deep, but it doesn’t really feel that important as Doom is all about the gameplay. 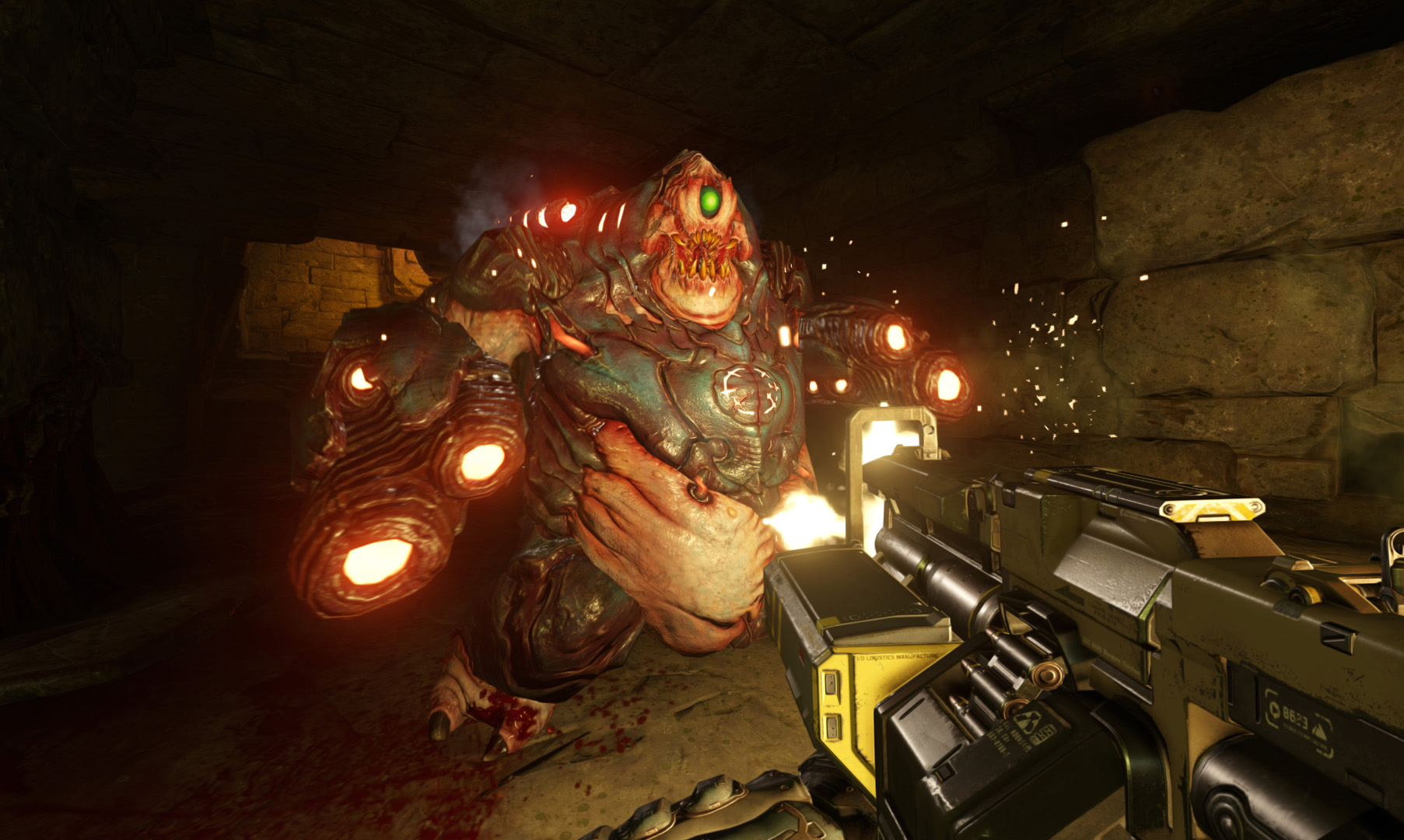 Doom plays like the original, stripping away any form of modernisation. What’s instantly noticeable once you get up off of that chained bed to be displayed is the speed. It’s like you’re constantly super sprinting and there is no option to slow down. At first it was a distraction as I found it hard to stop to admire my surroundings. Then it became clear to me why I was moving so fast: the combat. Doom isn’t about stealth or cover hunting. Far from it. This time, it takes us back to old fashioned first-person combat as you’re encouraged to stay on the move whilst dispatching demons with the kick ass arsenal that you find fairly quickly into the campaign. Guns such as the pistol, shotgun, the returning super shotgun, plasma rifle, and of course, the BFG are all here, and every one of them feels brutal and powerful. If that’s not enough, each gun can have up to two mods attached by finding a little robot during your adventure. This is perfect for adding charged shots to your pistol, a rocket launcher to your assault rifle, and even a grenade launcher to your shotgun. These mods can again be upgraded to add perks that make them easier to use. It’s an impressive amount of depth to a seemingly simple shooter. The combat is fast and fluid with no noticeable slowdown, even during hectic periods. It’s extremely fun as the nice variety of demons keeps you on your toes, and they’ll swarm if you’re not quick enough. For such a fast and frantic shooter which encourages you to go wild, there is a scarce amount of ammunition. Many times I found myself running on empty with my favorite boom-sticks having to either use my pea shooting pistol or hunt for ammo.

Ammo conservation comes in the form of brutal gory kills. Shoot a demon enough and they will enter a staggering state accompanied by a visual indicator. Come close to them during this and press the melee attack button, which is the traditional click of the right thumb-stick, and you initiate a gory kill. These are brutally satisfying to pull off, especially to the big guys. Punch a demons head apart, use their own appendages to batter them or use their own weapons to dismember them, each kill is different depending on the direction of approach or type of enemy. The novelty soon wears off, sadly. You soon find yourself performing gory kills out of necessity, helping conserve ammo and gain health rather than doing them purely for the enjoyment. Luckily they don’t bring the action to a standstill or last long enough for enemies to swarm.

Doom‘s campaign is entirely linear, but that doesn’t mean there are no secrets to uncover. Explore off the beaten track to discover ammo caches, power ups for your Praetor Suit, or armor pickups. There are loads to find. Why wouldn’t you want to explore the martian environment or realm of hell? They look great.

Doom‘s visuals range from tight corridors of the facility to the vast surface of our red neighbor, and it looks fantastic if you stop long enough to admire it. Demons come in all kinds of forms from the zombie like grunts to the towering Baron of Hell and the return of the Cacodemon. With each demon carrying its own form of attacks, some can shoot energy from afar to just rushing you to pummel you to death. The big guys are frightening, sure, but not unbeatable as long as you stay in motion and keep that itchy trigger finger.

Doom‘s multiplayer modes are pretty standard. Deathmatches, team based deathmatches to domination types and clank based matches are all available to tear up fellow human players. Upgrades come in the form of more customisation options and weaponry, but the loadouts are fairly limited. You’re restricted to two starting weapons which you can’t change. Pickups during matches are purely health, armor, or ammo but progress to super pickups such as haste, quad damage, and regeneration. These spawn in fixed locations on the maps so they are rife for campers, but at the same time they are the sites of some tense firefights.

If you’re feeling creative, trying out the SnapMap mode is a must. This mode allows you to create some inventive levels. It’s a seriously powerful tool that requires time to play with. Enemy placements, explosion triggers, spawn points, and décor are but a few features available to tinker with. I wouldn’t use it until you’ve played through the campaign, however, as it can spoil things in terms of enemy types. It’s surprisingly easy to use once you get the hang of it, and soon you will find yourself playing it with your friend over the airwaves.