I don’t think I’ve ever played a game that manages to be so insanely addictive yet as frustratingly difficult as Enter the Gungeon. Despite countless deaths, frequent self-flagellation for stupid mistakes, and having only made it to level 4 a couple of times, I somehow keep coming back for more and more.

Enter the Gungeon is one of the latest in a new breed of rogue-likes. Like the games it draws inspiration from, titles such as Nuclear Throne and The Binding of Isaac, it’s a top-down bullet hell dungeon crawler rendered in cutesy pixel art. Four misfit heroes seeking personal absolution have travelled to a distant planet on a quest for the ultimate treasure: a gun that can kill the past. Held within the bowels of a grim fortress known as the Gungeon, those wishing to wield its power must first do battle with the scores of Gundead that guard it.

So you pick a character, head down into the procedurally-generated Gungeon, and blast your way through room and after room of baddies. Clearing the areas earns you bullets that can be spent at a trader that appears in every level. Occasionally you’ll also be rewarded with health and ammo, as well as keys that can be used to open chests. If fortune smiles, you may even happen upon a decent weapon or item. Sooner or later you’ll stumble across the boss lair. Defeat it and you can descend to the next floor, where you’ll encounter more of the same – only this time even harder. Die and you have to start all over again. 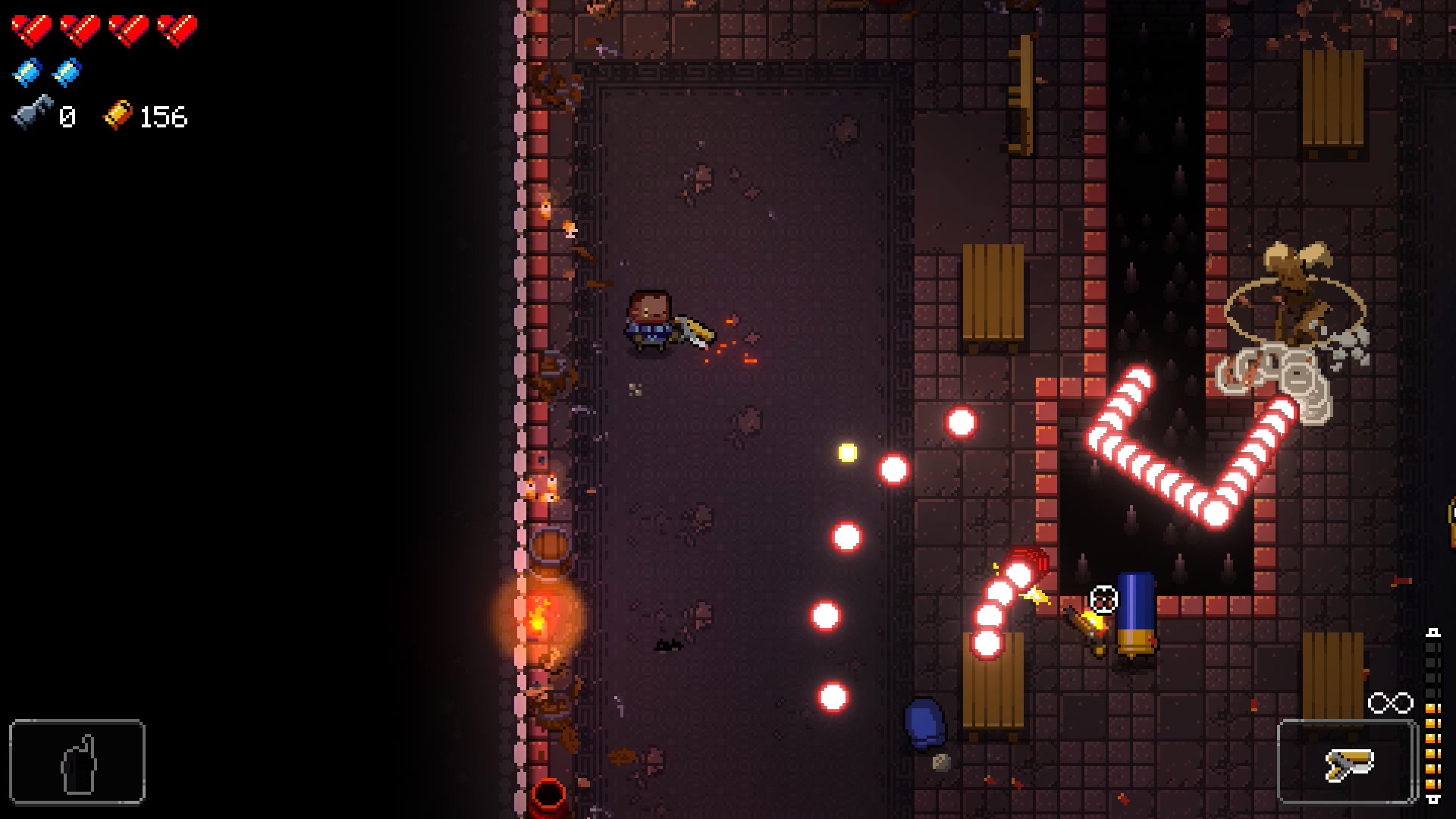 Enter the Gungeon may not be very original in concept, but it’s rather slick and considered in its execution. And you’ll find it hard not to be won over by the sense of fun and enthusiasm that permeates throughout.

The gunfights are frantic and exhilarating. With the music pumping, you burst into each room guns blazing, decorative props smashing all around you while you weave and dodge roll past the throng of oversized projectiles. Better time that dodge roll right though, as you’re only invulnerable during the first half. You can kick over tables to create temporary cover, roll explosive barrels into groups of Gundead, and even drop chandeliers down on their cute little heads. If you’re desperate, you can fire a blank to neutralise all incoming fire. Though you may want to save them for the boss fights. And as you’d hope for in a game like Enter the Gungeon, the controls and movement are smooth and precise, though I definitely preferred the accuracy of a mouse over the slightly better mobility of a gamepad.

There are four Gungeoneers to choose from, each favouring a slightly different playstyle and with their own backstory to uncover. The Marine has better accuracy, reloads, and a piece of armour. The Pilot enjoys reduced prices, an extra item slot, and a lockpick. The Convict has a shotgun and a Molotov. The Hunter has a powerful crossbow and a faithful canine companion. They all start with their own unique infinite ammo pistol, but you’ll be hoping to find something with a little more oomph. 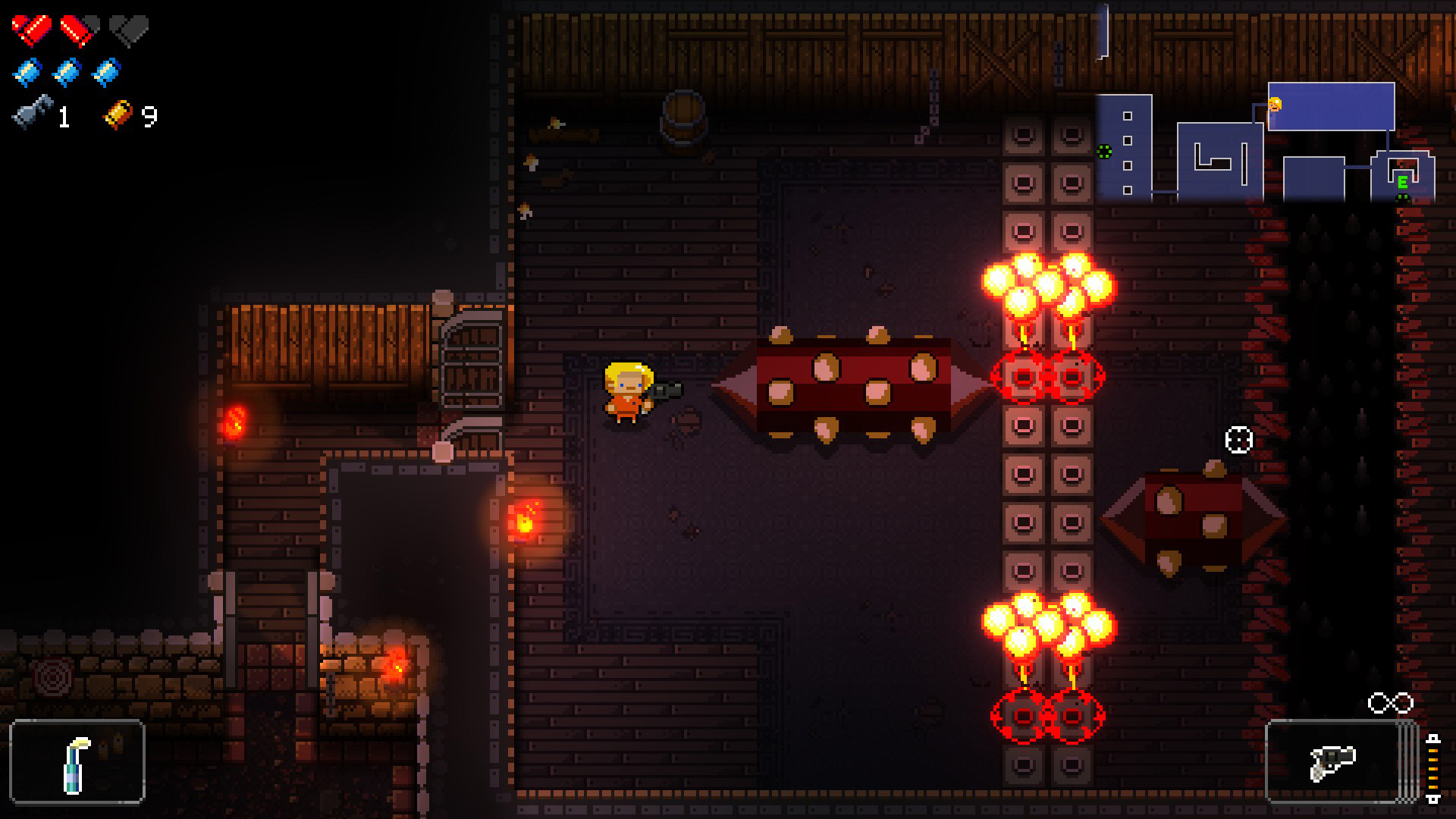 The Gundead themselves are delightfully silly and gorgeously animated. You’ll encounter gun-toting munitions, suicidal grenades, letter-firing books, bullet-egg laying birds, Pac-Man ghosts with tommy guns, and strange blobs of jelly, to name just a handful. Each pose a unique threat with their own behaviours and firing patterns. And they make such adorable sounds as they die. Bless ‘em.

Then there’s the size and wackiness of the Enter the Gungeon’s arsenal. There are 190 unique weapons and around 200 items, each with their own entertainingly daft descriptions, which of course you can read at any time in the preposterously-named Ammonomicon. There’s a demon head that breathes fire, a lowercase “r” that spells out the word “bullet” in bullets, a barrel that shoots slippery fish (nothin’ easier), a mailbox that fires junk mail, and a crate that fires anvils. And yes, some of them are even useful.

Visually, it’s like a cross between Hotline Miami and Zelda, and it looks fabulous. The environments are pleasantly varied, colourful, and lavishly adorned. There are courtyards and gardens, tombs, libraries, mines, banquet halls, prisons, and cellars, and they’re all crammed full of cheerfully gun-obsessed paraphernalia. And the attention to detail in the tiny pixelated animations is damn impressive, right down to reflections in puddles and mirrors, food spilling from flipped tables, and all the environmental destruction.

But let’s move on to discussing the difficulty. This is a bloody hard game with little margin for error and no easy mode. And no doubt this will put many off. Not only do you have to contend with an incessant hail of bullets as well as off-screen enemies, but there are all manner of traps, pitfalls, and area effects such as fire and poison to be avoided. The various Gundead combine dangerously to produce overlapping bullet formations that can be very difficult to dodge, while rubber bullets attempt to knock you into harm’s way and Blobulons charge you down. And then there are the boss fights, which will really test your mettle. In a game like Enter the Gungeon skill, reflexes, and timing are king, though a modicum of strategy goes a long way. Expect to die a lot, expect to swear a lot.

But this is where the real strength of Enter the Gungeon lies. In spite of the excruciating difficulty and the frustration of constantly starting from scratch, you find yourself locked into that “just one more run” mentality. Addictive is not the word. Let’s just say I found myself playing well past my bedtime – oh, very naughty.

The randomization is seamless and coherent, so each playthrough feels fresh. There’s a huge variety of environments and room layouts, items and enemy spawns, and several possible bosses for each chamber. There are secret rooms and hidden levels that can appear, and there are usually multiple routes through the map, though it’s definitely worth clearing all the rooms before you attempt the boss, as you never know what you might find. And yes, the Russian roulette of the RNG can make all the difference between a good run and a bad one, but it rarely feels cruel. 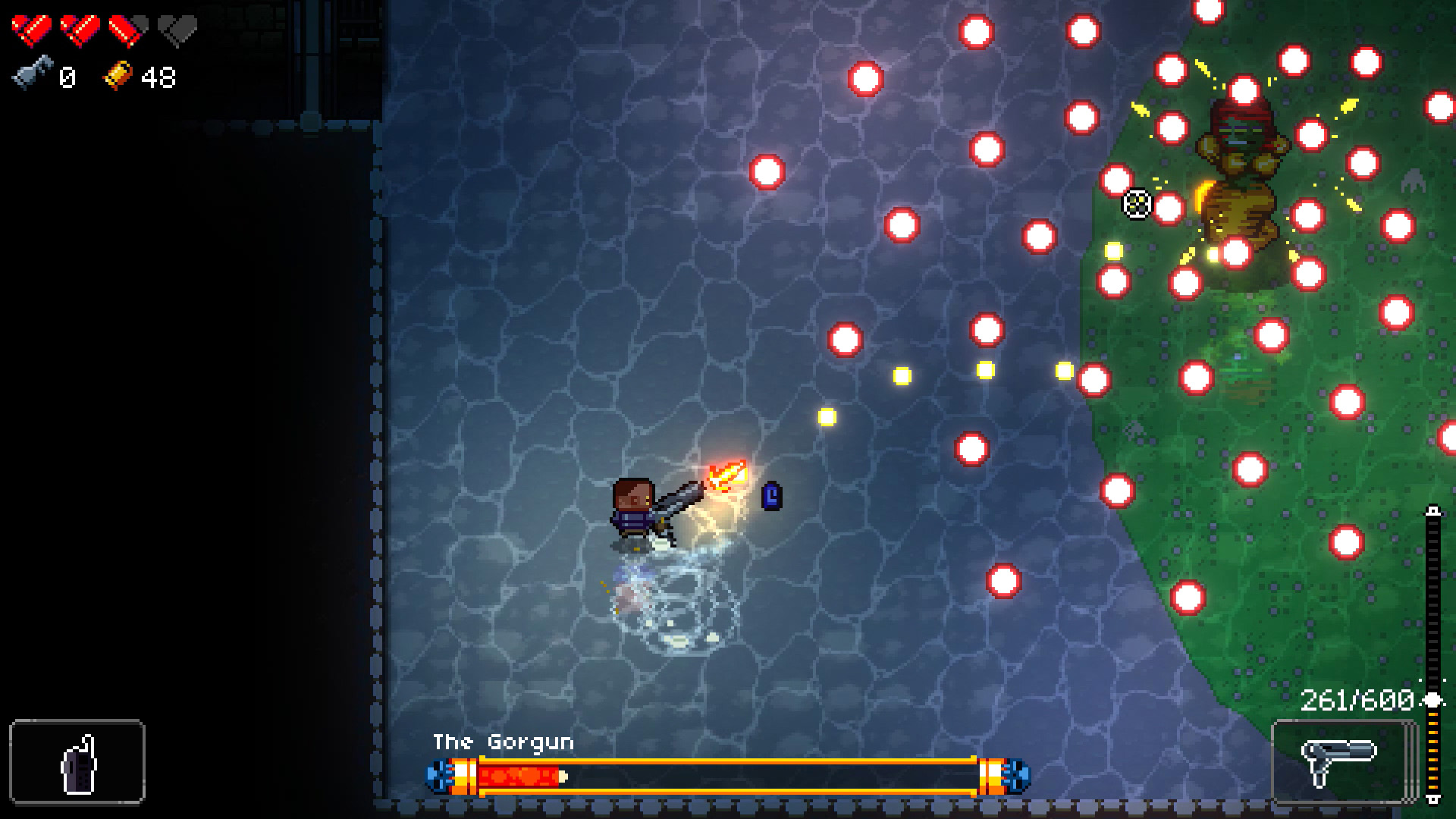 There’s also a progression system of sorts. From the second chamber onwards you will encounter imprisoned NPCs. Once rescued they’ll begin to populate The Breech (the Gungeon antechamber) or appear randomly in the Gungeon, where they will offer a range of services and side-quests. Eventually, you can even unlock shortcuts that allow you to skip entire floors, while defeating bosses and completing certain tasks rewards you with hegemony credits that can be spent on adding new and better weapons to the RNG pool. Not to mention a tonne of things I’ve still yet to discover. It all contributes to making things just that little bit easier, while adding variety and increasing replayability.

Most importantly, you do sense yourself improving with each run. You learn from your mistakes. You gradually familiarize yourself with each of the Gundead, their attack patterns and how to counter them. Your reflexes and tactics get better, and you learn how to use the layouts to your advantage. You also begin to discover the game’s many nuances and secrets, and simple things like saving your keys for the rarer chest types and shooting the common ones open for the chance of receiving a lesser item. There’s certainly a lot more substance and depth to Enter the Gungeon than first meets the eye. 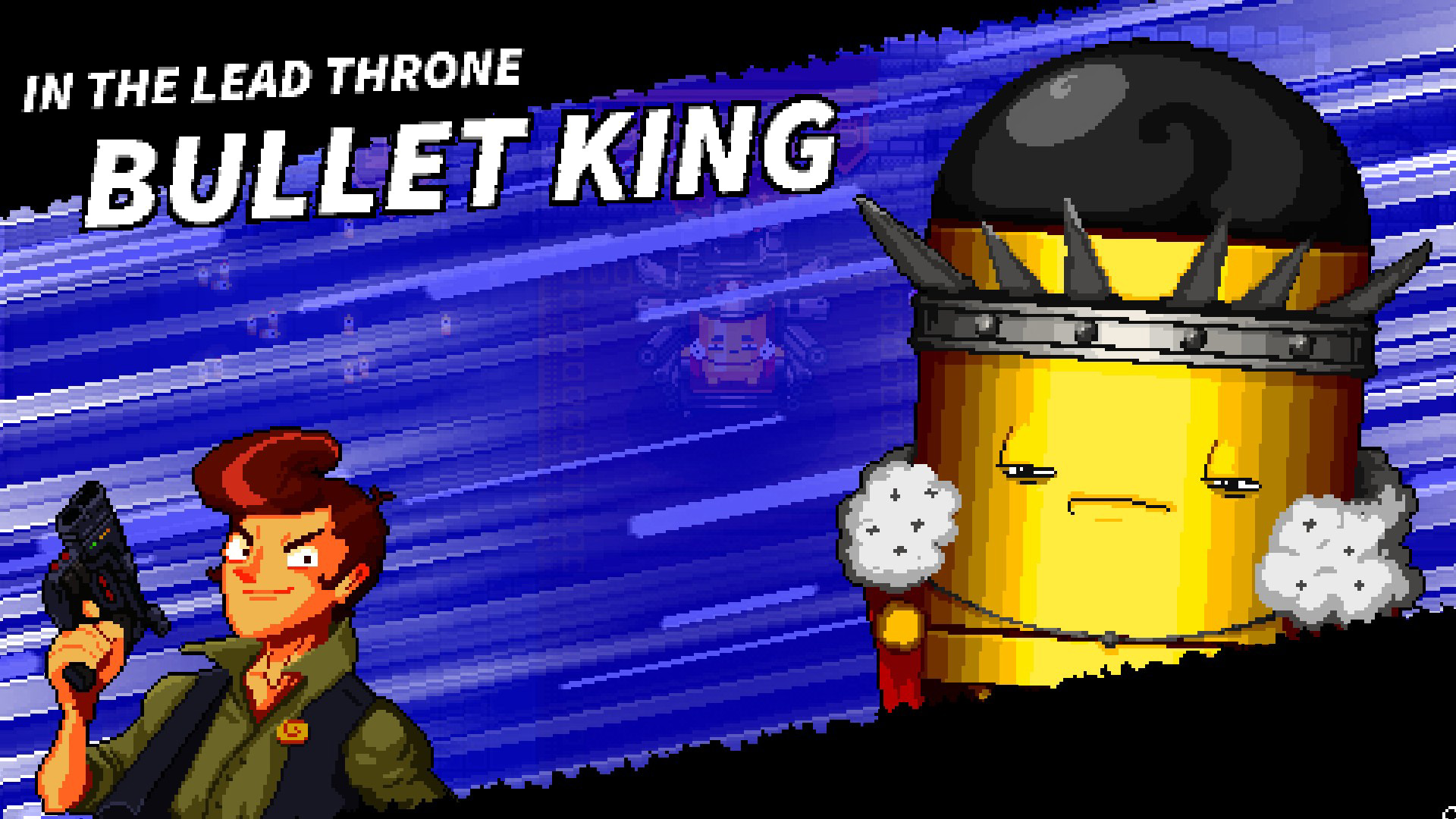 In short, Enter the Gungeon is an adorably gun-obsessed dungeon crawler that thrives on its silliness and its over-the-top bullet storm gunfights. It’s slick and well made, the cutesy pixel art is fabulous, and it’s chock full of replay value thanks to its well-implemented procedural generation and a raft of secrets and side-quests. The difficulty may infuriate at times, but the balance is just about right, and persistence and practice are duly rewarded. That said, while its challenging nature will appeal to many, others may be completely put off. There is no easy mode.