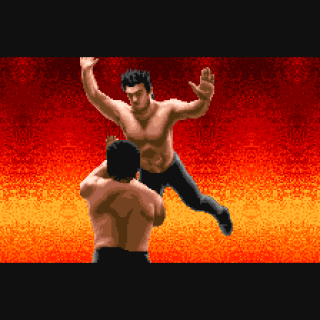 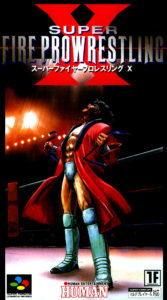 Back to the warm bosom of Nintendo we go for some top class grapple action from our good friends at Human Entertainment. Super Fire Pro Wrestling X Premium was the last Fire Pro game to be released on the Super Nintendo back in March of 1996. To this day, it is not only a game that was way ahead of its time but it’s also eminently playable, if perhaps a couple of steps away from perfection.

As a child, I was always aware of professional wrestling. I have vague memories of WCW Wrestling being on terrestrial TV in the UK in the early to mid 90s. A vivid memory is Hulk Hogan getting his knee smashed with a wrench by a mysterious masked man in what must have been something like 1994. However, outside of the brief glimpses I had of the pseudo sport on TV, along with the odd occasion where I would get to play the famed arcade game WrestleFest, my knowledge of wrestling was at the vaguest of minimums. I knew I enjoyed it, but I just never got a chance to watch it owing to SKY Sports and TNT swallowing up the rights to (the then) WWF and WCW respectively.

Thus it wasn’t until the late 90s, when my mate Jim brought round a video of the 1998 Royal Rumble for me to watch, that I actually started getting into wrestling and was able to recognise all the big names in WWF, WCW, and ECW. It was even later that I first came across Japanese Wrestling, or “Puroresu” as it is known in that part of the world, and it took me a while to really get into that. However, by the mid 00s I was a big Puro fan, and I was hoovering up all the New Japan, All Japan, and NOAH stuff I could find. It was while looking for tapes online that I came across games like Fire Pro and Virtual Pro Wrestling games. These were games that were made predominantly for the Japanese market and featured the Japanese wrestlers I was watching on my Puro tapes. 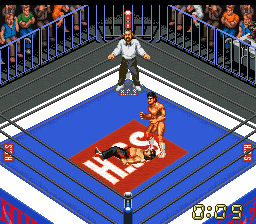 The first thing that strikes you about Super Fire Pro Wrestling X Premium when compared to the wrestling games released in the west at the time is the size of its roster. Whereas you’d be lucky to get something like 10 or 12 wrestlers in a SNES or Mega Drive wrestling game, Premium swarms you with nearly 80, with the option to edit existing wrestlers while also creating your own should you wish to! For a 1996 Super Nintendo game, this is simply outrageous!

The game is unlicensed, but it’s pretty obvious who all the wrestlers are supposed to be, and any Puro fan with a keen eye will be able to recognise their favourites pretty quickly. The game includes wrestlers from all the major Japanese companies of the time such as New Japan, All Japan, FMW, and WAR, as well as having a block of American wrestlers which includes the likes of Hulk Hogan, Undertaker, and The Steiner Brothers. The game also includes prominent MMA Style fighters from RINGS, Pancrase, and UWFi such as Minrou Suzuki and former UFC Super Fight Champion Ken Shamrock. 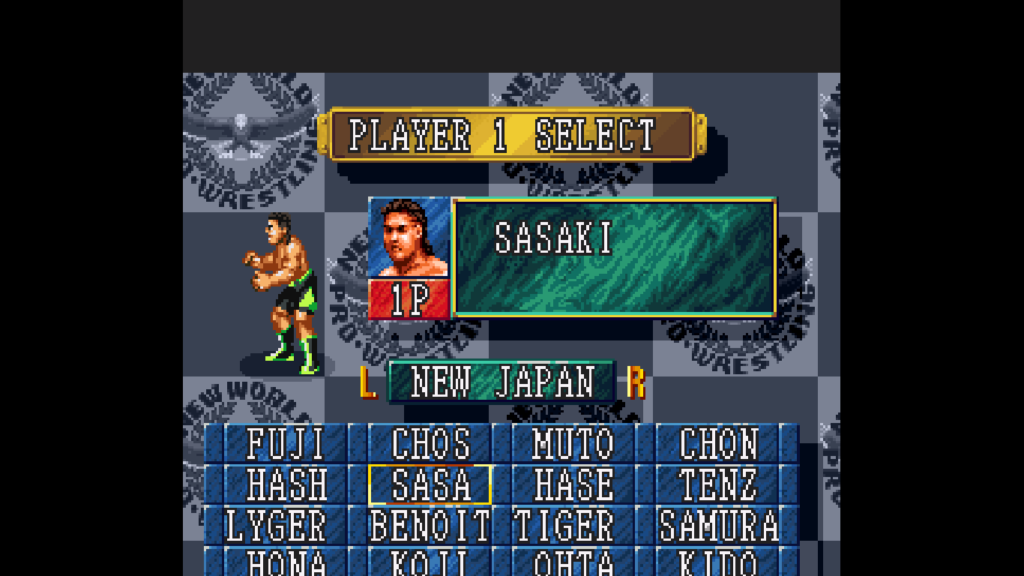 Each wrestler also has their own style and moveset to boot, again something the western games didn’t really have at the time. When playing WWF RAW on the SNES, the diminutive Luna Vachon feels no different from the 7 foot plus Diesel, with their finishing manoeuvres really being the only thing that differentiates them. This is not the case when playing in Fire Pro. A high flying pro wrestler like Jushin Liger will differ greatly in comparison to a shoot fighter like Suzuki. Whereas Liger will be diving off the top rope and hitting his opponent with high impact head drop moves, Suzuki will instead be using strikes and MMA techniques to get his opponent down on the mat so that he might force a submission.

Premium also focuses on a different style of gameplay in comparison to games like RAW. Whereas RAW is essentially a button masher, Premium is more about timing and positioning. When two wrestlers make contact, they will enter a grapple, at which point you can then try and land a move on your opponent. There are weak grapples, medium grapples, and strong grapples. Some wrestlers will also have a special move that you can perform by pushing the “Y” and “B” buttons together at the same time.

The gameplay matches the general ebb and flow of an actual wrestling match, which means that if you jump right in trying to hit all your big moves, your opponent will automatically block them. This means you have to start with weaker moves and work your way up to hitting your big moves at the bout’s crescendo. This not only brings strategy to the proceedings, but it also brings a great bit of satisfaction when you finally plant your opponent with a finishing move after 10 minutes of struggle. 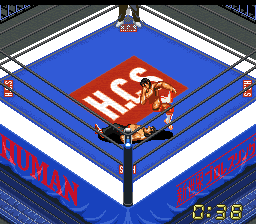 Along with the hundreds of grapple moves at your disposal, you also have a host of strikes, submissions, corner and outside dive moves to try out depending on who you select. This gives replay value as you continuously return to try different wrestlers in new match-ups. Again, it’s amazing to see a game from 1996 have so many moves in it and unique ones at that. For example, if you play as the devious Great Muta, he will pull out a spike and start jabbing his opponent in the head with it behind the referee’s back, which can even draw blood if done enough!

Playing this game for the first time, I was shocked to see my wrestler get busted wide open from an errant headbutt. This was something I thought wrestling games hadn’t started to include until the fifth gen, but here it was before my eyes on a game from the mid 90s! My eyes grew even wider as the pudgy Mr. Pogo then blew a huge fireball in my wrestler’s face, causing him to roll around on the floor in agony. It’s almost as if this game was a template for everything that was due to come in the generation that succeeded it. 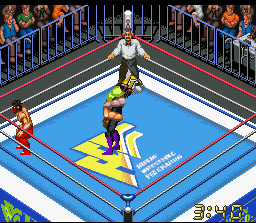 The game goes for 2D graphics with an isometric view of the ring. Some may not be too keen on this, but it’s partly thanks to this that Human is able to squeeze as much out of the SNES as it can. It honestly feels at times like the SNES is getting pushed as far as it possibly can to house this gigantic hoard of treasures on a mere cartridge.

The game isn’t perfect by any means, though the flaws are minimal in the grand scheme of things. I often find myself tumbling out of the ring when I don’t mean to, and submission moves are exceedingly hard to break out of, based as they are on mashing your D-pad to the point that you think you’re going to have to buy yourself a new controller.

These nuisances don’t take away from the fact that this game is excellent fun and well worth a play if you’re a fan of the wrestling game genre. The soundtrack is also an absolute home run and adds to the overall experience. 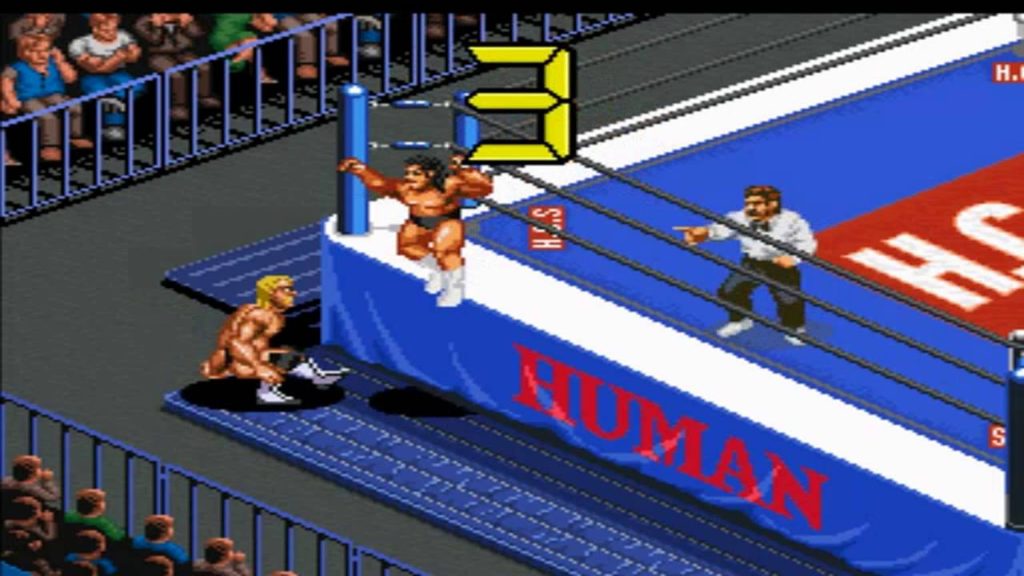 You can view an excellent BATTLE between Hulk Hogan and The Undertaker, courtesy of bizzaro13, by clicking right HERE

Looking for more great content here on the site? Of course you are, why wouldn’t you? Take a goosey gander at the following, you cheeky little sausage!

Could a Spider-Man and Deadpool crossover ever work as a video game? You can see what Anthony thinks by clicking right HERE 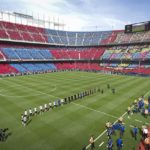 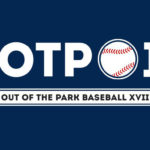 Giveaway: Want to Win a Free Copy of Out of the Park Baseball 17? Details Inside!