After a long holiday in the Aegean, Indie Freebies is finally back from its hiatus. Don’t worry though, thanks to SPF 50 and a penchant for strong shade, my sickly complexion is completely untarnished. I don’t want people not instantly stereotyping me as a gamer! Anyway, just the one game featured today, a hellish 2D angling game from Indie Freebies stalwart Suits n’ Nukes.

Fishing is not generally my bag. In fact, I still have nightmares from when my dad used to take me fishing as a young boy. The polluted skies of the nearby industry lining the horizon, the biting cold and constant rain, drinking tepid and overly milky tea from a grotty Thermos flask, the long awkward silences, and spending an entire day without catching a single bloody thing. Well, I supposed it was quality bonding time, though we could have just played together on the Speccy or Mega Drive.

However, Suits n’ Nukes’ Nightmare Fishing Tournament is more a literal vision of hell – eternal torment, festering corpses, rivers of blood, and big, nasty-looking fish with vicious teeth and evil eyes. Recently deceased, you find yourself being dragged out of the Bay of Torment by a sinister shopkeeper with more than a passing resemblance to the Grim Reaper. The good news is that you’ve arrived in the Underworld just in time for the annual fishing tournament, and the grand prize is a return to the Land of the Living. So, grab a beer and stock up on some skull bait! 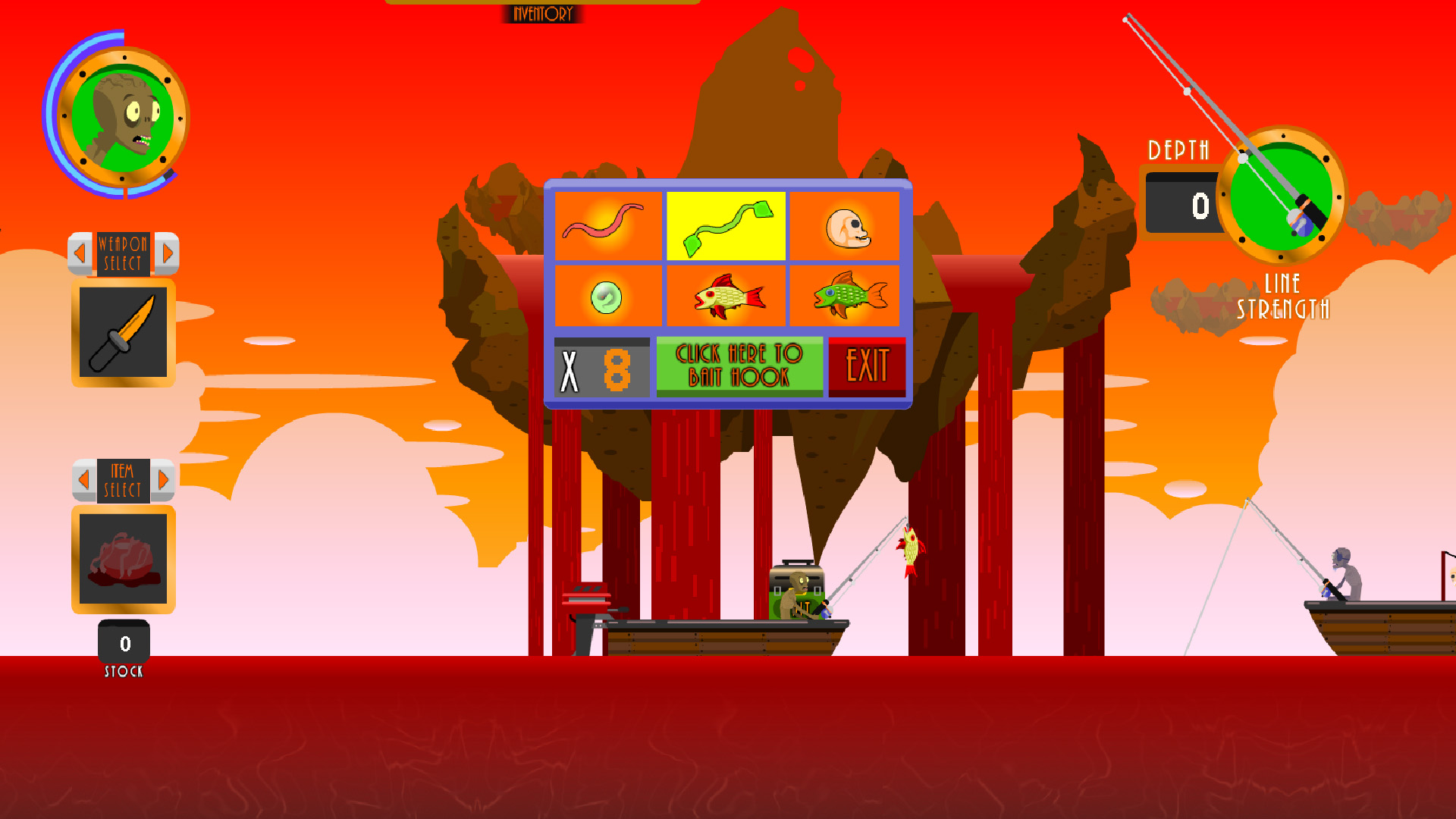 The aim is to win each of the 10 rounds by catching the heaviest of the specified variety before the five-minute timer expires. Just to ease you into things, the first round has an unlimited clock, allowing you to get to grips with the mechanics and spend time chatting with your creepy competitors for hints and tips.

Despite the simple premise, it’s a surprisingly involved game. Using the keyboard to control your slimy cadaver and the mouse to interact with the environment, you need to position your boat, bait your hook, and drop the line to a depth of your choosing. Purchase of the line cam (a steal at 100 credits) is a must, as not only does it let you see what’s going on below the surface, but holding your mouse over each of the breeds lets you know which of the six lures they go for.

The fun really starts once you actually hook something, because now you have to dive into the murky depths and knock the beggar out before the line breaks. The main way to do this is to dodge its jaws, grab onto it, then stab it frantically, repeating the process when you eventually lose grip. You have to balance this out with occasionally returning to the surface to refill your lifeless lungs (video game logic, eh!) while trying to avoid being eaten by anything that happens to be swimming by. Once stunned, it’s time to head back to the boat and reel the critter in while he’s still dazed. 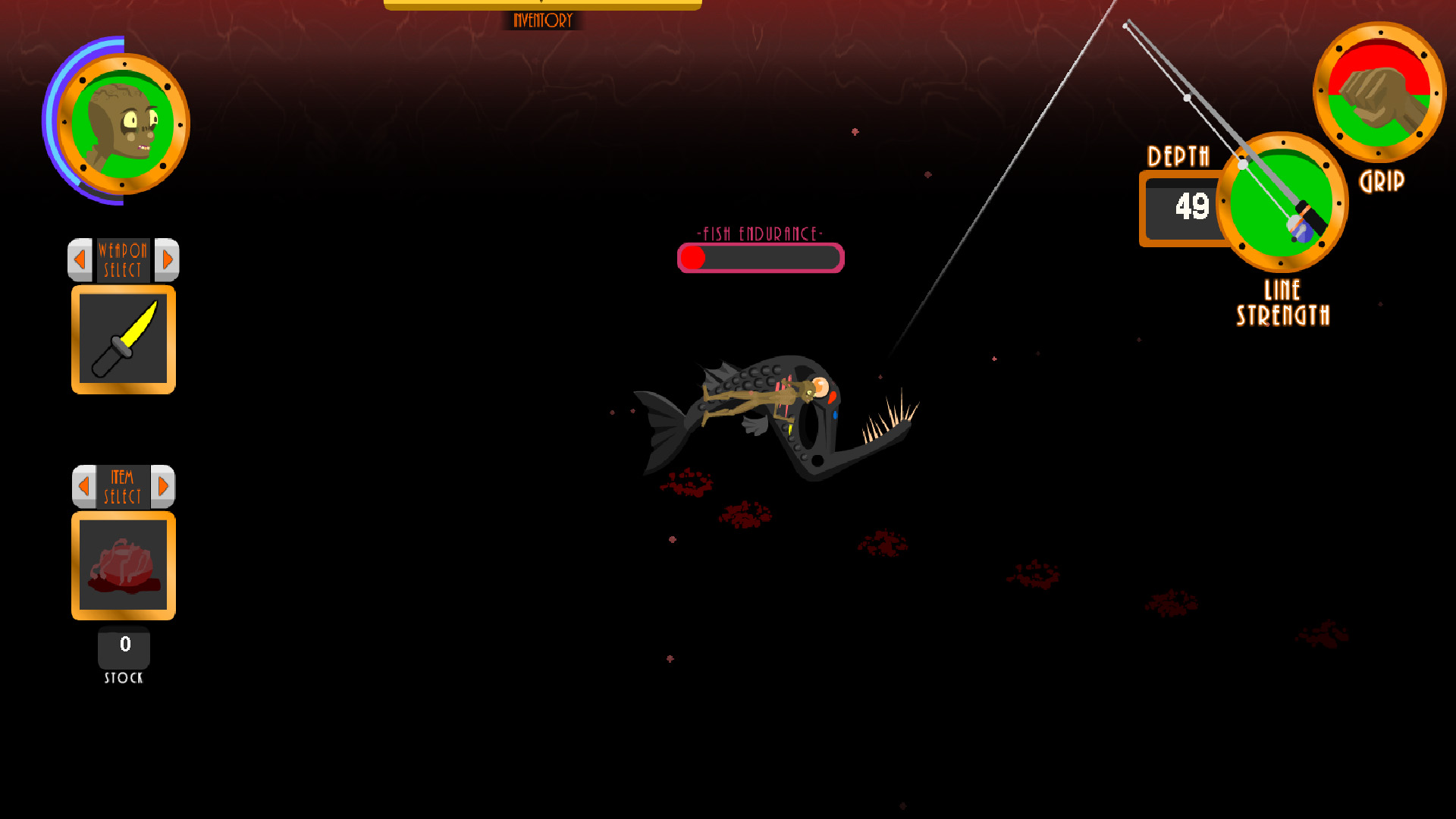 The gear you start off with is pretty basic. Luckily, Death patrols the bay on his river barge and is more than happy to supply you with swankier toys in exchange for the credits earned from landing fish and winning rounds. Though what he needs money for, I have no idea. As well as extra bait and ammo, he’s got chum for attracting fish to your position, better knives, a diving bell, and a net launcher for temporarily trapping hooked fish. And if you’re really feeling flush, you can splash out on a spear gun or mines, which provide an alternative but expensive way to stun your victims.

You can also craft perks and upgrades in the shop from different combinations of the scales that fall off the fish when you attack them. The upgrades include things like faster swimming, a stronger grip, better lung capacity, and a longer and stronger line. My favourite being the “Take It Like A Man” perk which means that you “no longer scream like a bitch when bitten by a fish”. Plus, you can save money by scavenging the sea bed for fresh bait. There’s also a nice little Easter egg to be discovered down there, and you might even find some pearls. 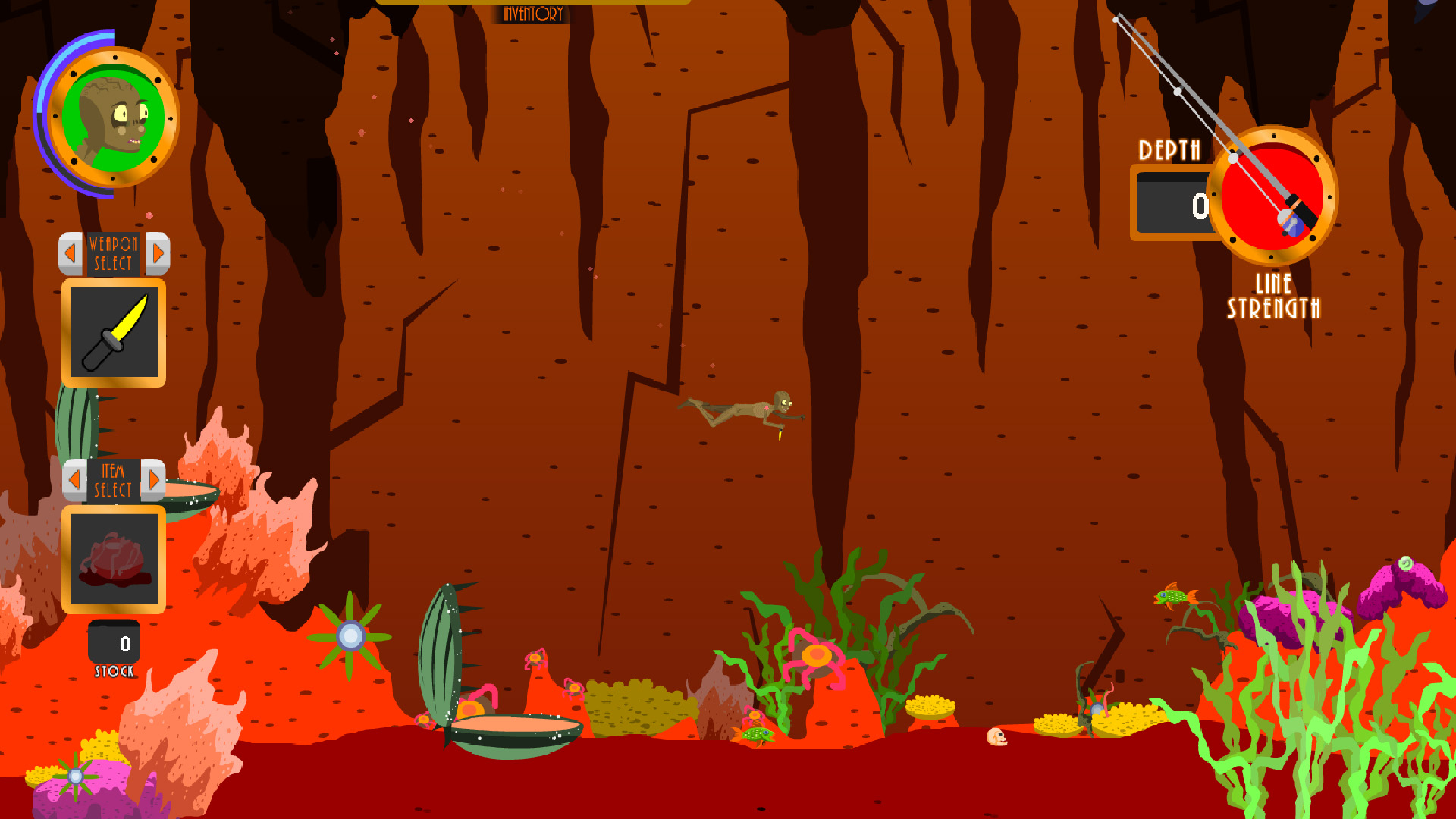 I do think that the balance could be tweaked slightly. Primarily, it’s a little too easy once you’ve acquired a few of the upgrades. Plus, after death or failure you can restart the round with no loss of progress, although I suppose that makes up for the lack of a save function. And I thought it would have been nice if you had more interaction with your three opponents, who just sit there in the same place doing nothing – what they catch in the end is completely randomised and unseen.

There’s also a handful of known bugs, though these are not experienced by everyone. Personally, I had problems with some of the crafting recipes not always working, and very occasionally I was unable to hook anything else after catching the target fish.

However, unlike the fishing trips with my father, Nightmare Fishing Tournament is still marvellous fun, and I managed to while away an entire afternoon with it. The weather is certainly a lot better in Hades than it ever was in the north of England!

As usual, it’s chock full of Nukes’ inimitable dark humour and quirkiness. And it looks and sounds great thanks to the playful visuals/animations, funny voice acting (“they don’t call me Stump ‘cos I’m hung like a tree trunk”), and a nice selection of music. 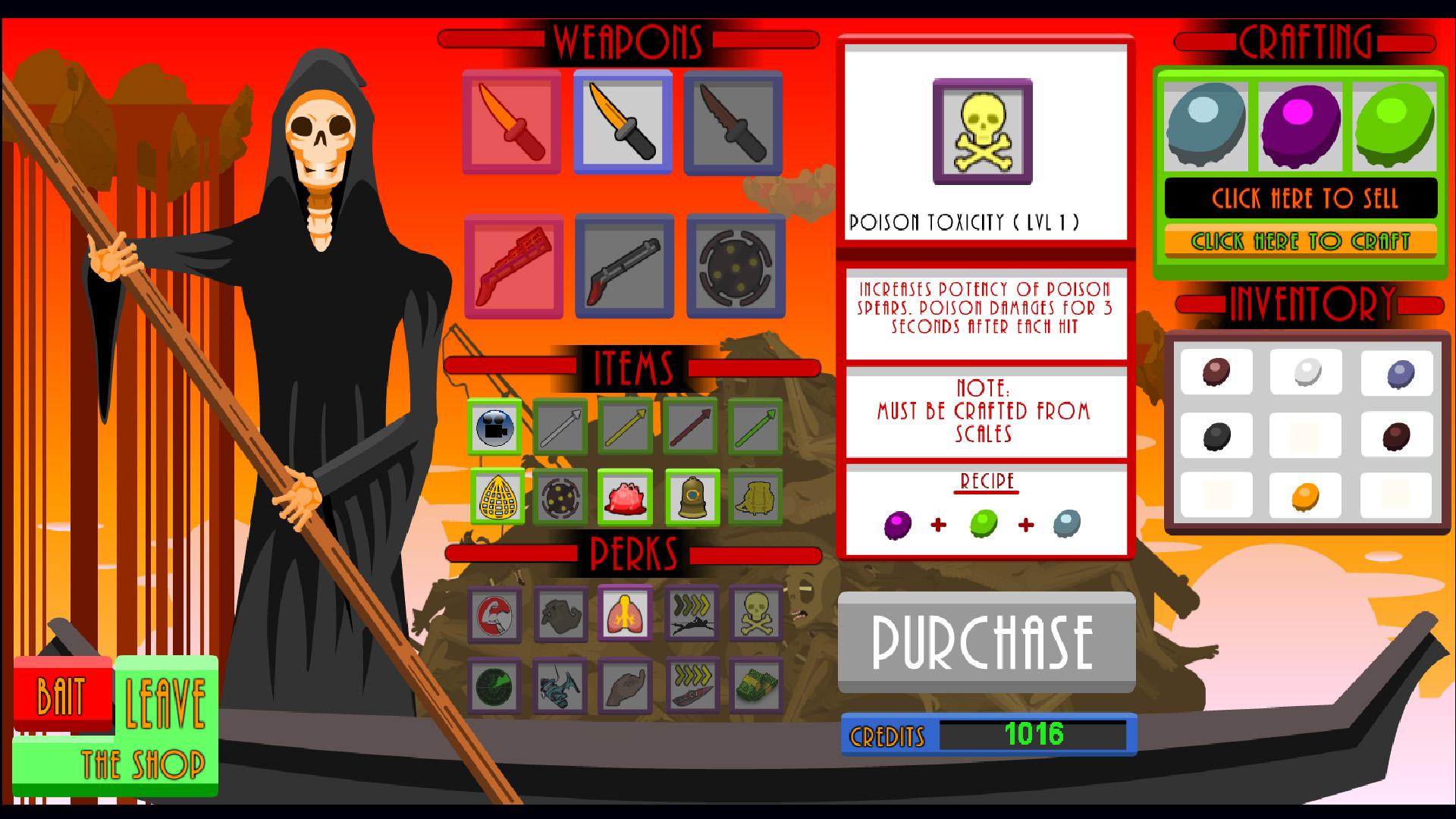 There’s such a fabulous vibe when you’re sat in the boat – the serenity of the orange sunset, gently rippling water, chirping of crickets, and the twangy country blues track contrasting sharply with bodies constantly plummeting in the distance and the levitating waterfalls of blood, not to mention the monstrous beasts lurking below. And how can you not love a game that features albino baby eaters and long-jawed corpsers?

Nightmare Fishing Tournament is available for Windows and can be downloaded from Game Jolt here. You can grab it for free, but it’s listed as name your own price, so if you do enjoy it, you should definitely consider making a small contribution. The suggested donation is $2. 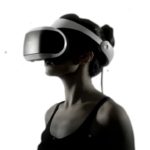 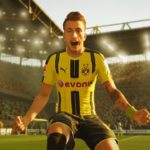