Hello, wrestling fans, and welcome to Gaming Respawn’s review of Smackdown Live’s second standalone PPV, No Mercy. Smackdown Live is quickly becoming the better brand, much as it was during the first brand split all those years ago. We had some good solid matches during No Mercy but with some questionable match placements, so without further delay let’s moonsault straight into it. 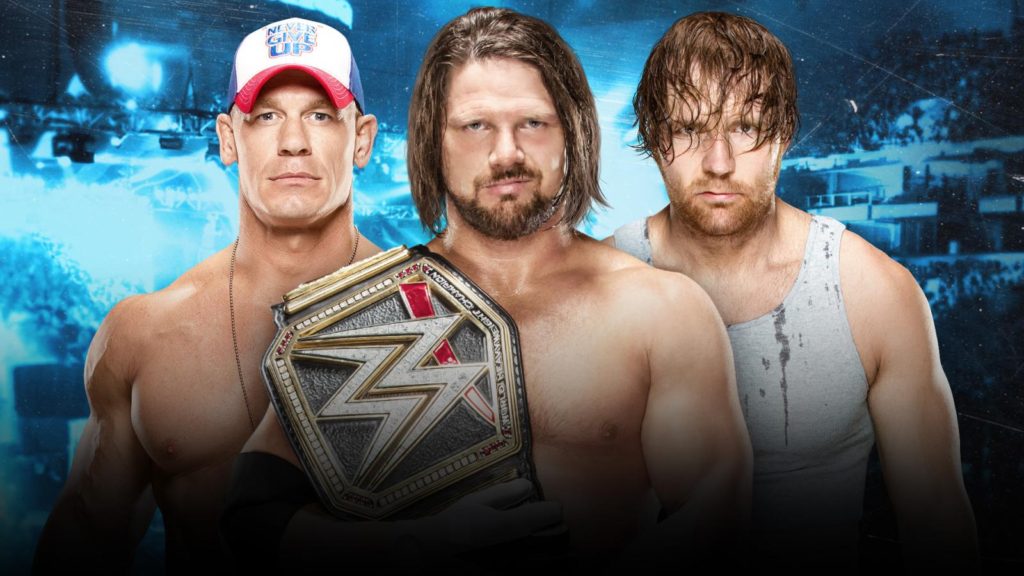 So, a bit weird that the main event wasn’t actually the main event and was the opener. I have since been informed that the World Title was put on first so that it didn’t clash with the Presidential Debate. I also found it very strange that the production team decided to air pre-match promo while all three wrestlers were in the ring, what the hell were they doing while they were waiting? Thumb wrestling maybe? Also, anyone else notice that Dean Ambrose was getting booed a bit? Interesting. Right, to the match. A good, solid triple threat with the usual back and forth action, and the third wrestler making the save just before the three count. What was very obvious from this match was that they were trying to build Cena’s strength in a big way, with the commentary team mentioning it around 10 times during the match. And having John do a number of power moves throughout the match. Why? I can’t really say at the moment, but it’s obviously building towards something. There were some excellent spots in the match, including AJ doing his Phenomenal Forearm to Cena from the ring to the floor, and AJ suplexing Cena on the edge of the ring! I don’t know if they have padded the edge in recent months, but there seem to be a lot more spots involving the edge of the ring nowadays. We got the familiar double submission with Dean and John both making AJ tap, only for the ref to restart the match. AJ then picking up with a win by hitting Cena with a steel chair. AJ is looking to be that sort of champ, and I am more than fine with that. Dean seemed to be the forgotten third wheel in this match, so I am fully expecting for him to quietly disappear from this feud and we will have Cena vs AJ for the title at Survivor Series. 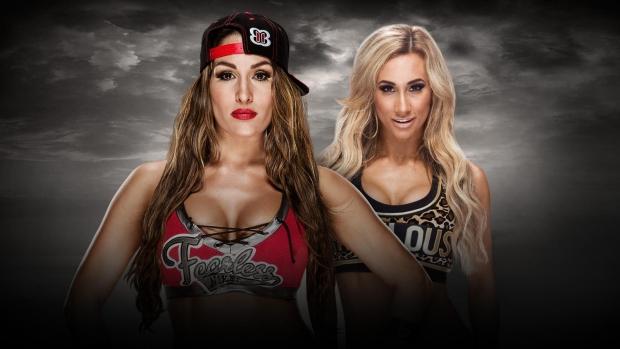 Zero reaction from the crowd when Carmella made her way to the ring. Carmella really is too weak of an in-ring performer to be in this sort of programme. This is actually a feud that has been built pretty well, especially compared to most modern feuds. There has been a good steady build up for a couple of months, as opposed to the usual two-week feud we get now. Carmella really needs to improve on the basics, she just looks so awkward when she bumps. Nikki Bella picks up the win with the Rack Attack 2.0, which was the only result I was expecting. 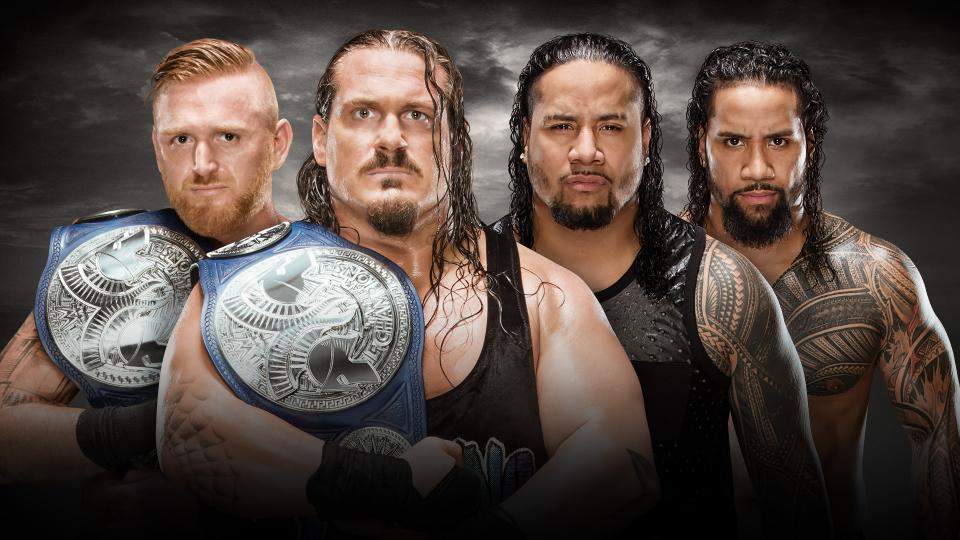 Even though The Usos are still very much evil, they are looking a bit less evil as they weren’t wearing all black, which is wrestling 101 for evilness. There’s not much I can say really about this one, just your standard tag match with the Usos being their usual evil selves. There was a great 2nd rope power slam from Heath Slater. I am quite surprised that Rhyno and Slater retained as I really thought this would be a very short-lived team. But hell, what do I know? I don’t work on the creative team, because if I did then I would have pitched calling Rhyno and Slater the One Man Beast Brand. You missed a trick there, Vince. So OMBB (see, even the initials work!!) wins by way of a Rhino GORE GORE GORE GORE, ahem, gore. One quick question as well, why the hell is Heath Slater’s music still 3MB? Very lazy. 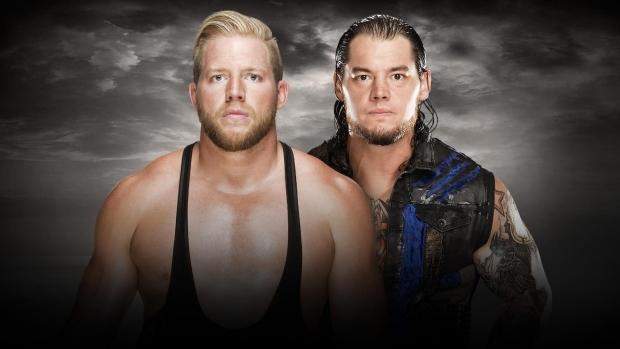 Yeah, so Jack Swagger is on Smackdown because his RAW contract apparently ran out. I know, I know it’s only been a few weeks, but just roll with it. This match happened because Corbin didn’t know Jack (yes, that is a thing now, again just roll with it). Corbin tapped out a couple of weeks ago on Smackdown, so the early build to the match was if Corbin’s ankle would last the match, can he put all his weight on it, you know the usual injured limb bit? So to counter this, Corbin went after Swagger’s arm. Baron Corbin has improved immensely since his early days in NXT, he’s a big, strong guy with a unique look, so with some smart booking, he could be a big player on Smackdown. Corbin picks up the win after a thumb-to-eye leads to the End of Days. Jack Swagger might not be anywhere near a top-level wrestler, but Baron Corbin did pin a former World Champion. 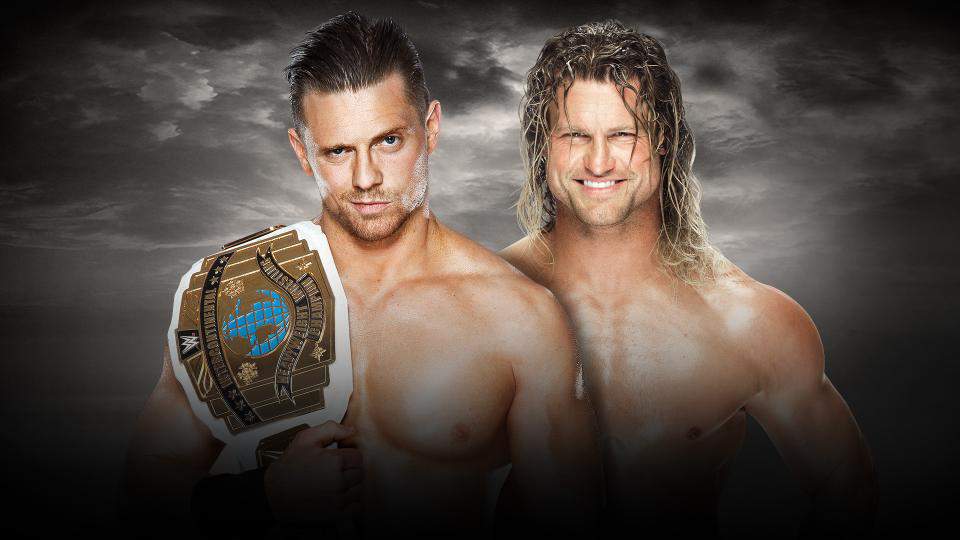 Right, so we know why the WWE Championship match was on first. So, I was fully expecting this match to be the main event as, firstly, it involves a title. Secondly, Dolph’s career was on the line, but alas, no it wasn’t the main event, just chucked into mid-card obscurity. Another superbly built feud, with tons of history between the two. Title vs Career matches are usually quite predictable, but this one I couldn’t call before the bell rung. It’s no secret that Dolph has been frustrated with his spot in the company for a long time now, and he re-signed his contract last year very near the end of his deal. The rumour was it was only a year deal, so going into the match it was definitely possible that Dolph would be leaving. Miz, who continues to go from strength to strength, was one of WWE’s best natural heels. Miz continues to mock Daniel Bryan and tease that in-ring return, which will never happen. Remember, Daniel Bryan “Daniel Bryaned” himself too many times. This match was less physical than their previous encounter back at Backlash, but it was your standard Dolph Ziggler match: solid in-ring work and forever wincing whenever Dolph doesn’t protect his head when taking a bump. Maryse again pulled some sort of spray out of somewhere (stop it, dirty minded people, you), and Miz hit the Skull Crushing Finale for a 2 count, then after a stiff AF Superkick Maryse called for her second backup plan, Micky and Kenny from Spirit Squad. That plan also failed as quickly as The Shockmaster’s debut, and then after Miz was distracted by Kenny with Micky and Maryse getting sent to the back, Dolph hit another Superkick for the win, minus his boot.

It was announced before the show started that Becky Lynch was injured and couldn’t compete, but Alexa would still be having a match. So, she came out and cut the standard heel promo ‘she’s scared to face me’ yada yada and how she will beat any replacement, and here comes Naomi. She possibly has one of the best entrances at the moment and was a good replacement for Becky. Someone is obviously feeding stupid lines to Mauro Ranallo as he actually voiced that Alexa looks like Harley Quinn. An okay stand-in match considering it was thrown in quite late, and there were a few snarky morons chanting ‘we want Becky’. This chant only works if a wrestler is intentionally kept away, not due to injury. Naomi did miss a couple of spots in the match but still pinned number one contender Alexa Bliss, so Triple Threat at Survivor Series (pre-show)? 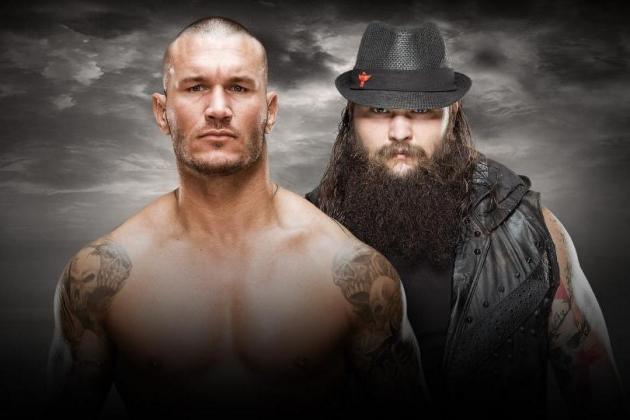 Excuse me a minute….HOW THE HELL IS THIS THE MAIN EVENT???!!!! WHY IS BRAY WYATT HAUNTING RANDY ORTON, AND HOW IS HE HAUNTING HIM???!!! WHY?! WHY?! WHY?! Okay, I’m done. Seriously though, why do they continue to book Bray as this unstoppable enigma? And why is he suddenly a god? Does losing to Kane make you a deity all of a sudden? JBL really needs to stop his soft talking when Bray makes his entrance like he is in awe of him. Bray had all the potential in the world to be this enigma, but two years of abysmal booking has made him a joke, I’m afraid. This match though was actually pretty solid and very physical. A big talking point here is that Luke Harper is back and distracted Orton so Wyatt could pick up the win. Yes, you read that right, Bray Wyatt won a PPV match, sort of clean. This really is last chance saloon with Bray. With Luke back, there is a great opportunity to try to fix some of the mistakes they made with Bray. Give Bray and Luke a tag title run, build them slowly. As a team they could be unstoppable, and this could really help Bray claw back the momentum he desperately needs.

Overall a good PPV. Not as good as Backlash but still enjoyable, and still a huge improvement on the garbage we were getting last year.

I’ll give No Mercy a solid: 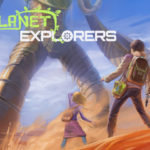 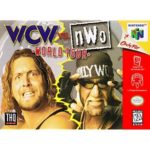