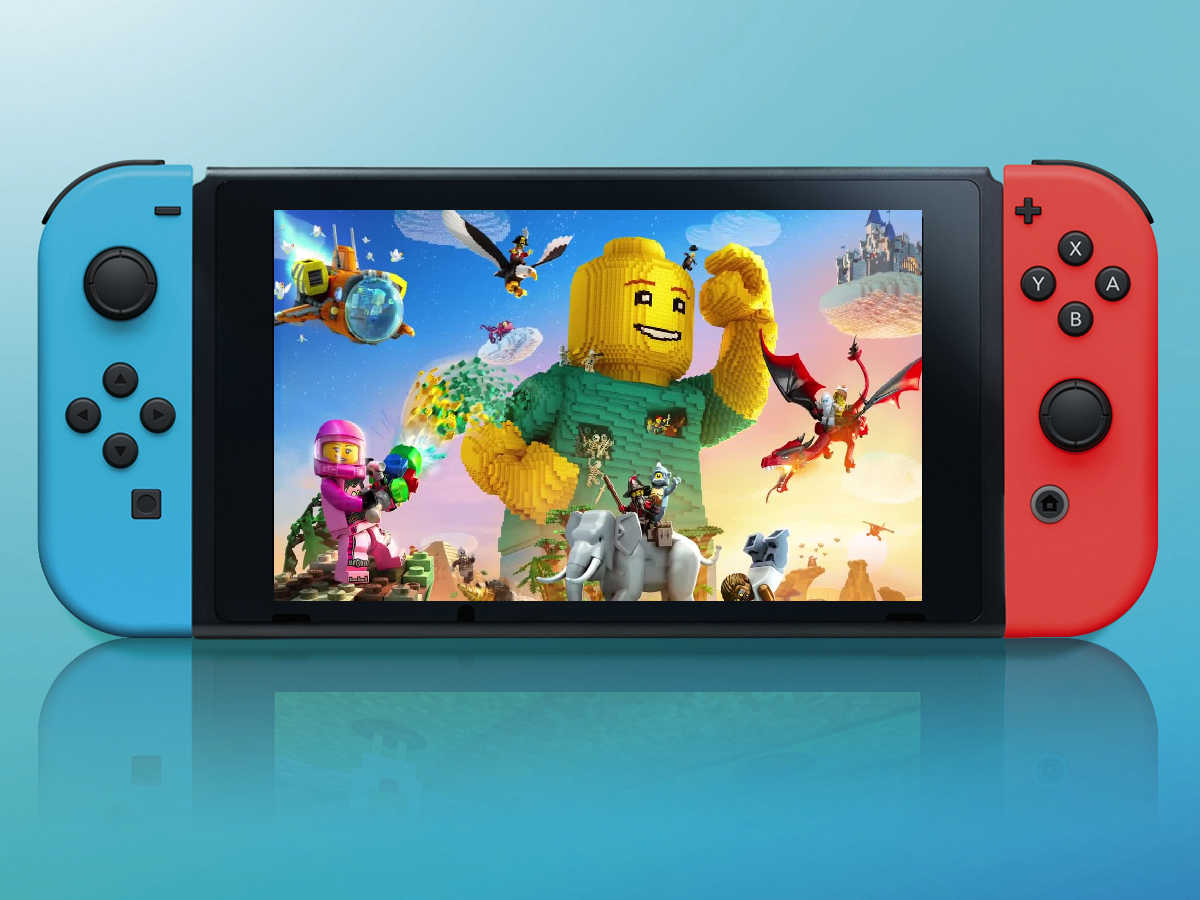 Earlier this year, TT Games introduced us to a new world within the mighty Lego universe. Though it wasn’t a licensed product or an original take on an existing Lego property, Lego Worlds felt all too familiar in an age which practically had grown up with Minecraft everywhere. Its new spin on the sandbox genre made enough of an impact to bring the title to the Nintendo Switch, a move which was all but required for the childlike building game.

When we reviewed Lego Worlds back in March, we gave it a 7.5, saying:

“Despite LEGO Worlds having a few irritants, as a whole it’s great fun. A LEGO game that unshackles your mind at last, and it looks great too.”

Though not much has changed with the new iteration ported to Nintendo’s hybrid, everything isn’t quite the same. Diving into the fairly open experience while on the go revealed Lego World’s greatest strengths and also highlighted the game’s weaknesses.

We start the same as before: You’re an uneducated, unsophisticated Lego character who’s been dropped into a random world filled with everyone’s favorite building bricks. As you work to become the Master Builder, your toolset is expanded, and the range in which this toolset can be applied also grows. Upon obtaining and learning about each new tool, a set of challenges helps you get comfortable with them. From building houses to expanding the riches of a pirate, Lego Worlds has a cast of supporting characters which are in need of some serious help from the Builder. Despite this inherent need, none of them feel like real people but more like the plastic toys which they were modeled after. 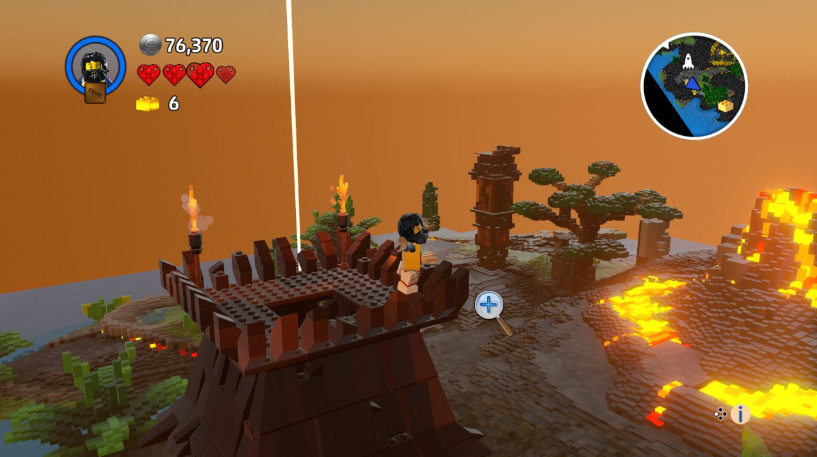 No character, other than the comedic and timely narrator, has anything to say except “I need help,” and “thank you.” This isn’t terrible as Lego Worlds wasn’t really meant for a story that amazes, but it would have been nice to see some effort put into the dialogue rather than the few lines we got from these side quest holders. Though they were solely meant for the passing along of key information, like when to use certain tools, they could have just been replaced by lines from the more interesting narrator (who was brilliantly done). Despite the lack of story, TT Games still found a way to plug in their wonderful sense of humor through the animations and interactions between characters.

Whether it was the scratching caveman or the crumbling of skeletons I had defeated, the animations which characters display in Lego Worlds stick in my mind as one of the things that kept me playing. Seeing the combination of events and the reactions by the game’s AI made my time in the brick-filled universe all the more silly. There was nothing to make my eyes water, but the charm in which TT Games puts into its licensed games is very much still present here.

Other than their silly features, Lego games are famous for their vehicles and character rosters. While there is no Marvel superhero or Darth Vader, Lego Worlds has a different way of letting the player customize who they operate as. As you grow your standing as a Builder, so too does your collection of outfits grow larger. I started off as an astronaut before switching to a caveman and then into a super villain. Though these costumes are generic renditions of pop culture tropes, they still give the player options in who they want to run around as. More importantly, cool vehicles are fun to drive, fly, and operate. They don’t just serve as quick ways to get around your creations either. Some are fully fleshed out tools that can shape the earth in ways which might be less convenient but a lot more interesting. These vehicles include helicopters, futuristic hovering cars, and the gigantic drill you see below. Each had their own advantages, making them almost requirements in gameplay sessions. 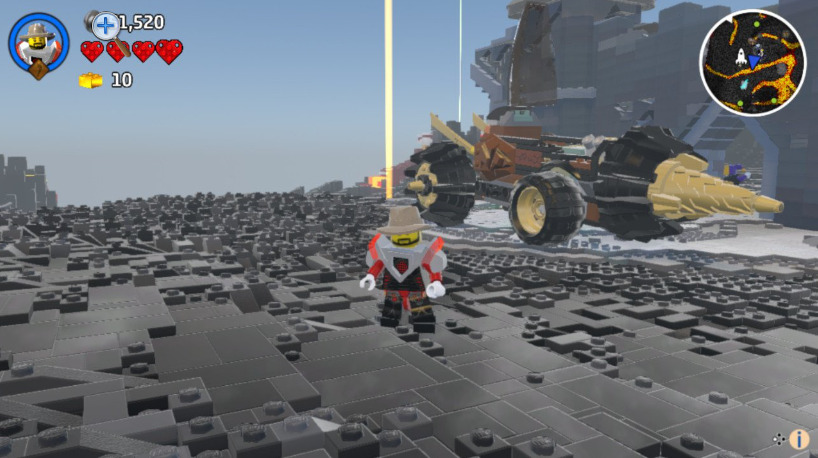 Lego Worlds would be an almost spitting image of console versions of the same game, except its performance and graphical fidelity hamper it when running on the Switch. Though not obvious, the fuzzy visuals of the Switch version of the game make the experience slightly less novel. The very impaired rendering distance on Switch also makes this expansive world TT Games promised much smaller, as my buildings weren’t noticeable from a distance away, no matter how large in stature. A few frame-rate dips also made the moment to moment gameplay feel inconsistent, and for some odd reason these happened most when in or around water. Despite these problems, I moved on and decided that the handiness of having a Lego game on the go made up for the many technical problems brought on by the Switch.

Just as I did this, the real gameplay of Lego Worlds dawned on me, and I noticed a problem that only took place in the Switch’s handheld mode. When trying to manufacture huge towns, big castles, and gigantic towers, I would find myself frustrated and sick of the experience within an hour or so. This was mainly due to the scaling of the game and the troubles with controlling the game in the tight space that the Switch’s screen gives. A huge TV screen may capture the vastness of my kingdom magnificently, but transferring that to the handheld screen just gave me a bad case of claustrophobia. Even when using my TV to play the game, I still have some problems with the Switch’s controllers and the way Lego Worlds feels. The in-game controls are already imprecise and slow when compared to similar games in the genre but add the tiny movements needed with the Switch’s Joy-Cons, and it only gets worse. I often found myself clicking the wrong blocks, placing them in places I didn’t mean to, and just being slow with building things overall. The main experience of Lego Worlds was spoiled, not only by its creators but also by the disadvantages of the Switch. 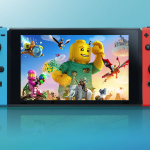 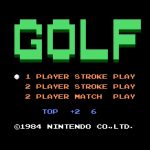 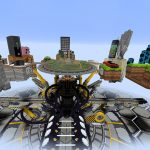