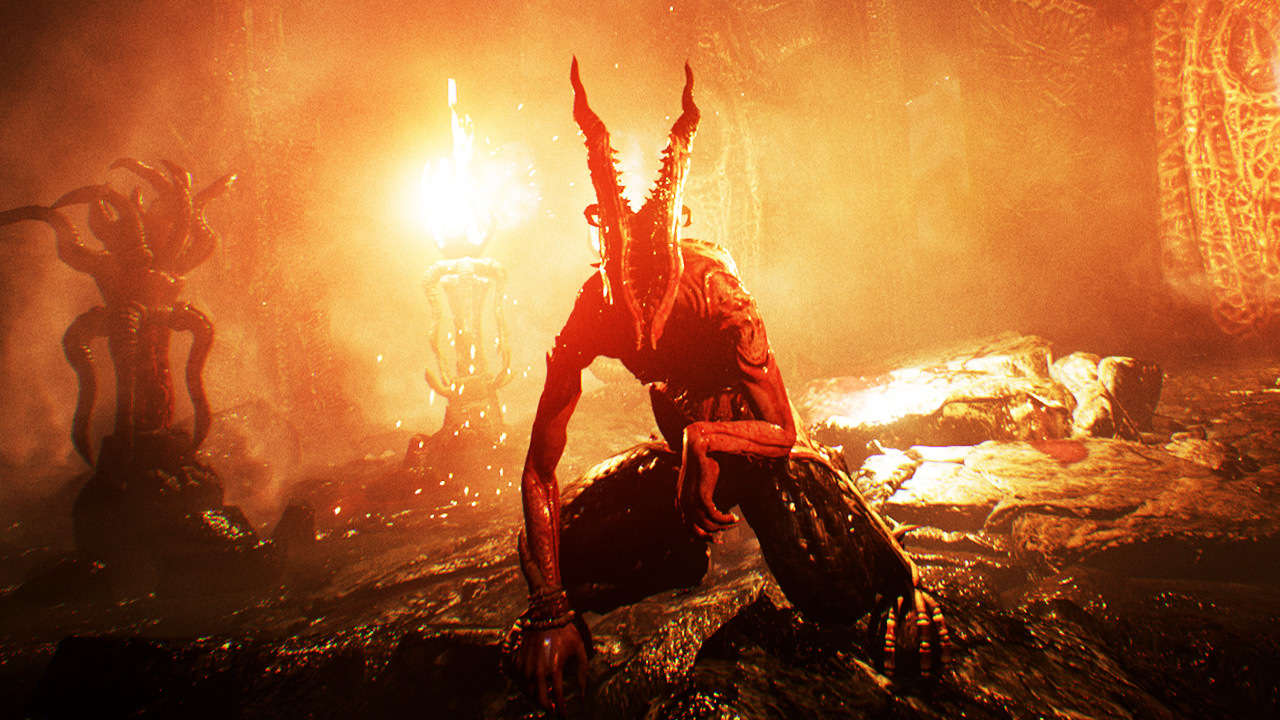 Horror and stealth, a combo that has produced some of the most exciting and terrifying games of the past decade. Outlast is a truly shocking experience with its creepy atmosphere and ghostly green visuals. Alien: Isolation was a faithful recreation of the visual style of the first Alien movie while managing to capture all of the needed elements of a survival horror-stealth hybrid. And Lone Survivor managed to truly make a scary game, despite the lack of a third dimension. So with a new game jumping up to join the ranks of great games in the horror-stealth classics, it is time to once again prepare ourselves for the worst and jump straight into a horrifying situation…it’s just a shame that it’s horrifying in all the wrong ways.

Agony is a stealth survival-horror game that pits the player against a ton of demons and unnatural horrors as they make their way through Hell. During the journey, the true nature of your character’s sins is revealed, and the shocking character revelations will make you go, “meh”. It is not to say that the game doesn’t have its shocking moments here and there, but by the time the game has tried to do something shocking for the 100th time in a 2 hour period, it just comes off as trying too hard. 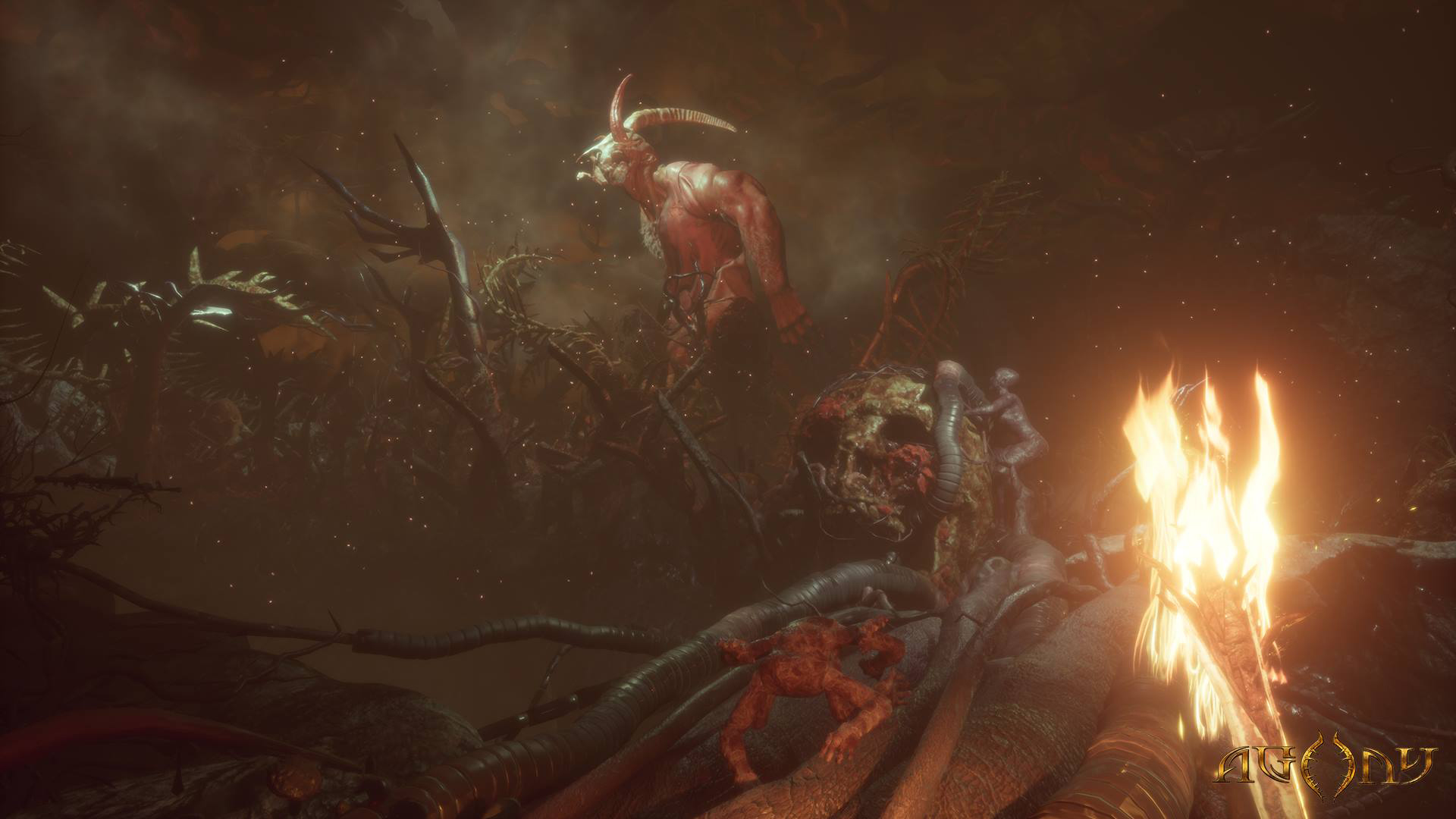 The gameplay all takes place in a first-person perspective, similar to games like Outlast and Alien: Isolation. Your job is to journey around and interact with the world, solving puzzles to progress while avoiding red, sticky death at the hands of a variety of demons. For full disclosure, it should be made clear that the term ‘puzzles’ actually refers to two different types of puzzle that get repeated over and over again up until the game ends. First, there is the ‘find a certain number of items’ puzzle, which involves creeping around a location trying to not to die and finding some sort of disgusting human body part, like a skull or a heart. Second, there is the ‘find a drawing’ puzzle, which involves creeping around and trying to find a specific rune drawn in blood which you then take back to the door and use to unlock it, assuming that you’ve actually got the right one and don’t need to go back and keep looking.

In hindsight, even these two puzzles aren’t all that different from each other. You’re basically trying to trudge around and pick up items, it’s just that one of them is a tangible object (or rather a set of tangible objects), and the other is a drawing that has to be remembered. Either way, the gameplay basically boils down to the exact same thing: sneak around and find things. It’s such a massive shame that the stealth mechanics are completely useless.

Control-wise, things work…acceptably. When you move the left stick, you walk around, you can examine/interact with the X button and you can also jump and run using the now almost standardised control schemes for those actions. The issue is that the controls feel a little loose at times, especially when the game does contain at least a few jumping/platforming segments. It was not very early into the game the first time that the character tried to jump to a ledge and ended up bouncing off of a wall to his untimely doom. 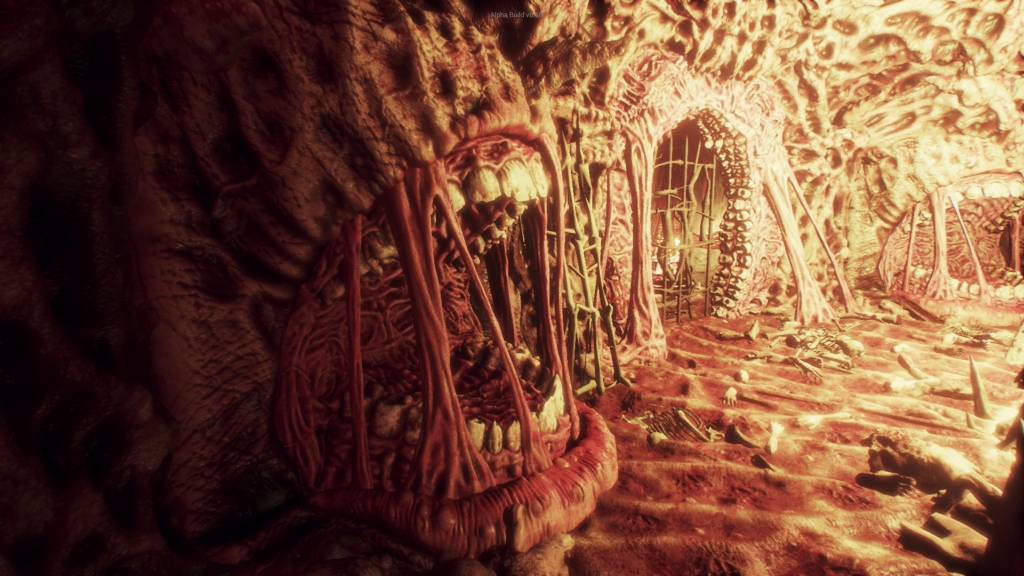 Perhaps the most important part of a stealth game is the way that the stealth mechanics work. In Aragami, you have the duality of light and shadow; in Dishonored, you have the dark powers granted to you by the Outsider to aid you; and in Agony, you have running, sneaking or hiding… oh, and of course, dying, lots and lots of dying. It is not uncommon for a stealth-horror hybrid to not give you the ability to defend yourself. What is unusual, however, is making the decision that you should be really easy to spot, and that you should be killable in a single hit.

Seriously, you can be spotted in this game very easily, and this is incredibly frustrating when you’re trying to run around a maze picking up skulls just to unlock the door to the next maze filled with gruesome scenery and poor puzzles. It seems that even when moving as slowly as possible, crouching and holding your breath at the same time, the nearest demon will still make a B-line for you as soon as you are in the same postcode. At that point, your options basically become run and hope that you reach a hiding space before they murder you, or just let yourself die and try to recover from there.

There is a mechanic designed to try and mitigate the issues that come with being caught called possession. The way this works is that there are a bunch of other damned souls wandering around the world wearing black hoods. If you rip off the hoods, you can possess these poor buggers in the event that you should die. When you die, your soul goes flying out of your body, and you have about 30 seconds to try and find the nearest wretch to inhabit; otherwise, you die for real. At its best, this system basically becomes something you need to exploit to make it through the game, at its worst it’s a broken system that will find you frantically flying around dark corridors which all look the same, hoping that you come across someone not wearing Hell’s latest head-gear trend.

If you don’t manage to pull off a possession, you instead die and have to go back to a checkpoint, which takes the form of ‘Soul Mirrors’. These mirrors are easy to find at first, but as you get further and further on, they become more and more elusive. This wouldn’t be too much of a problem usually, but each checkpoint only works for 3 deaths, and at that point you have to start the level all over again if you don’t manage to find another checkpoint. This is all made worse by the fact that these mirrors only save your progress at the point you touch them, so if you find 2 of the 3 items you need to continue and then die, you might as well have gotten a game over for all the good that the checkpoint did for you. 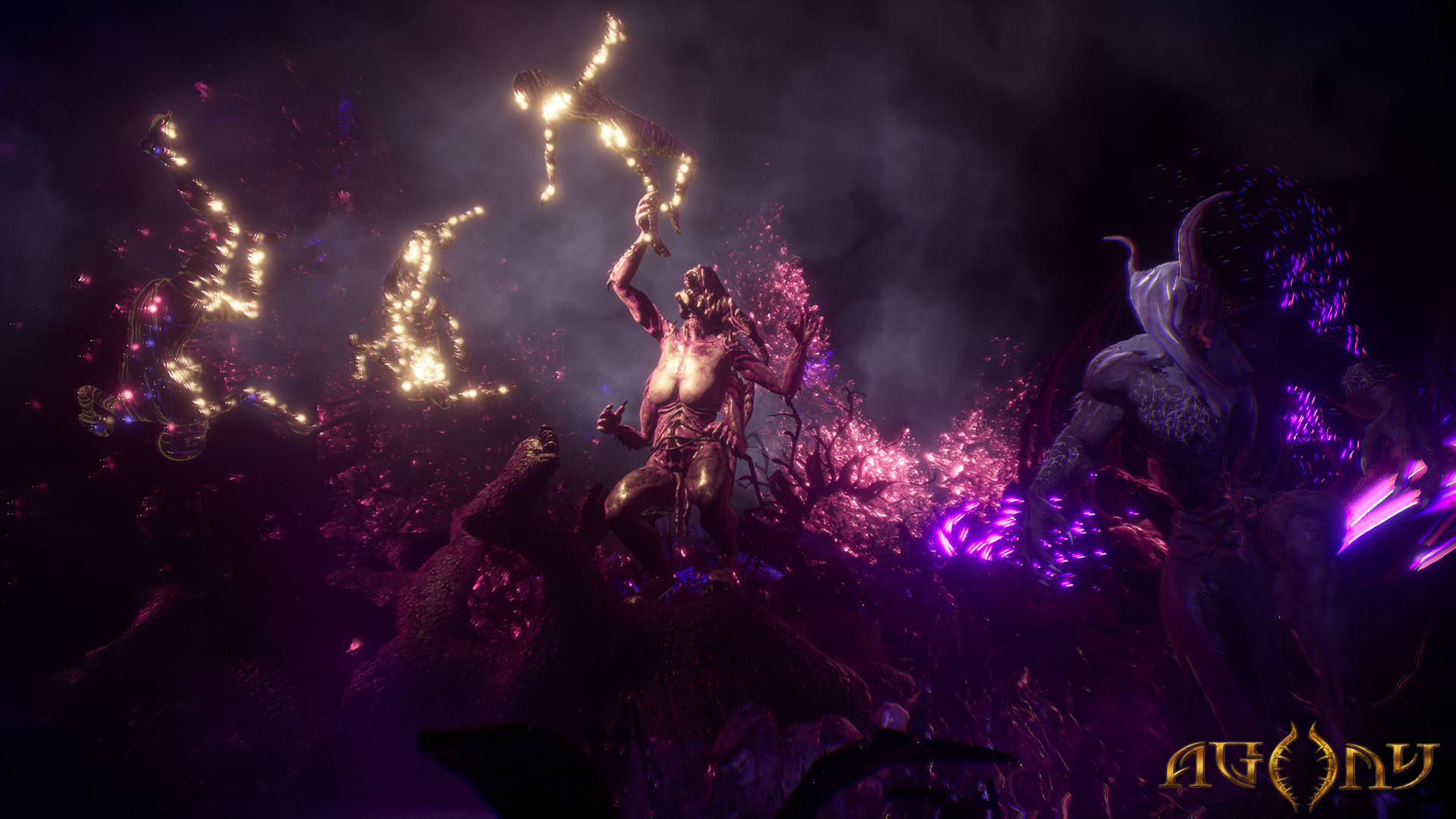 Compounding all of the previously mentioned issues is the level design. Visually, the game looks fine, at least well designed if a little poorly constructed. Everything feels like a pretty decent representation of a Christian Hell, and the walls drip and glisten realistically with human blood and various hanging organs. While this looks very good in game concept art and promo material, it does leave the game almost entirely impossible to navigate. Every area looks the same, and each level is either very maze-like, or in a lot of cases, literally a maze. You will probably end up wandering up and down the same corridor 7 or 8 times just because you didn’t realise that you were looping back on yourself when you passed the same glistening corridor for the millionth time that day.

So, level design is pap, and the visual design is okay. This leaves the actual graphics themselves, which are a massive, massive disappointment. The animation and model construction on the demons seems pretty good, their flesh jiggles as they move, and they walk like something that you can imagine would be occupying Hell. The rest of the characters are pretty shoddy, however. The other humans you come across look like nothing evenly remotely related to humanity in pretty much any sense of the word, and all of the models look like they were constructed by a 1st year game design student in college. The face movement doesn’t match up with the words they say, and in general, they just repeat the same 2 seconds of inhuman animation over and over again until you walk away. 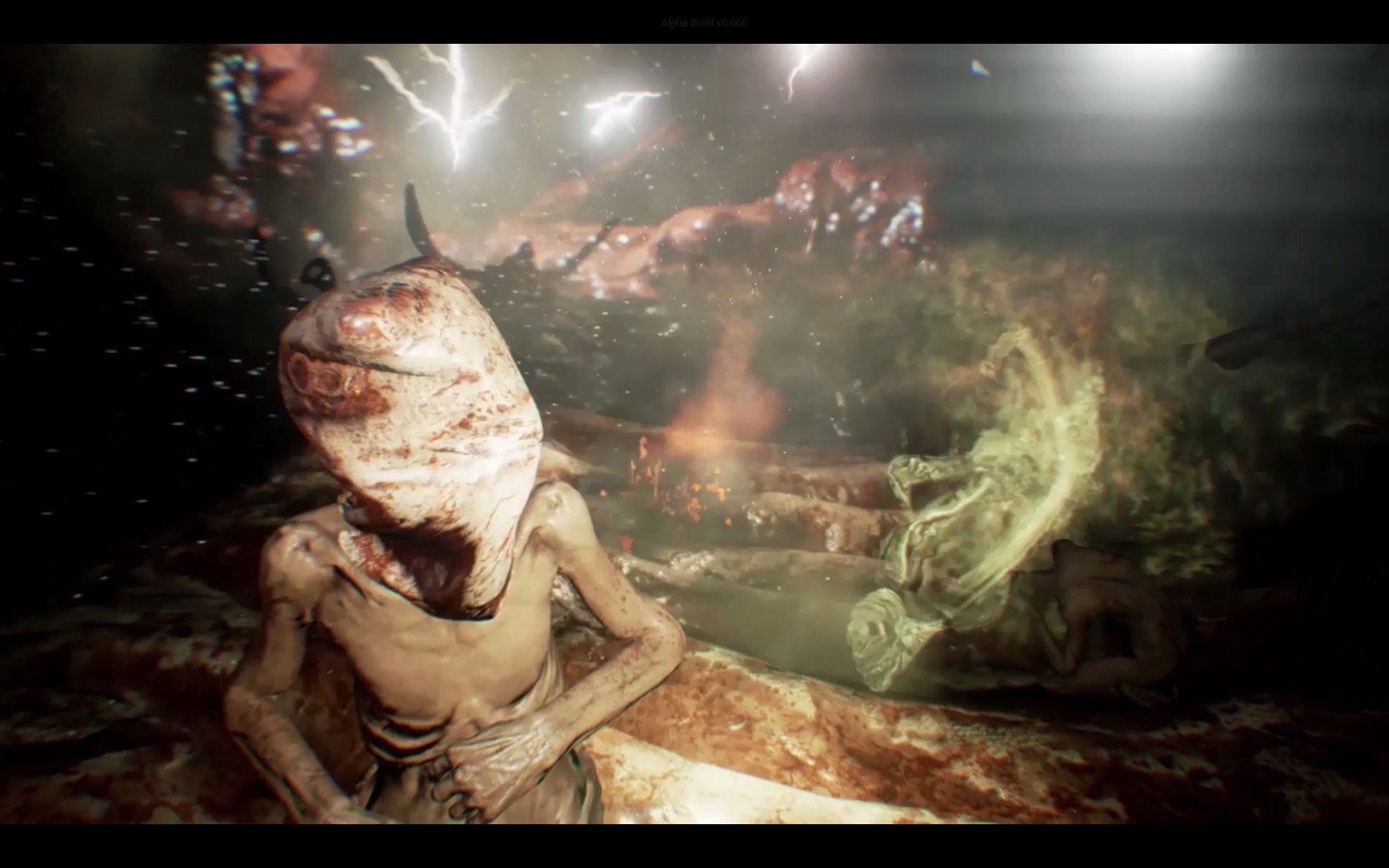 The sound is another issue. While there are music stings that indicate when a demon is close by, and the sound track in general works for a game set in Hell, the environmental sounds and dialogue are poorly done. The squishy sounds scream ‘poorly managed Foley room’, or worse, ‘taken from freesound.org’, and the world just feels progressively faker and faker the longer you are in it. Even worse is the voice-acting. The acting itself is too far the wrong side of cheesy, and pretty much no-one sounds like their heart was in the roles they were playing, but on top of that, there are numerous sound glitches, even after an 8GB update was installed. The lines of dialogue usually get around halfway through before they break and repeat themselves then end about halfway through the line when the character was still mid-sentence. If the numerous other issues with the game didn’t already break the immersion, this certainly would have done it, and worse yet, you just know that someone is going to claim they did that on purpose to make things seem more insane. 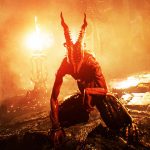 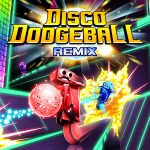