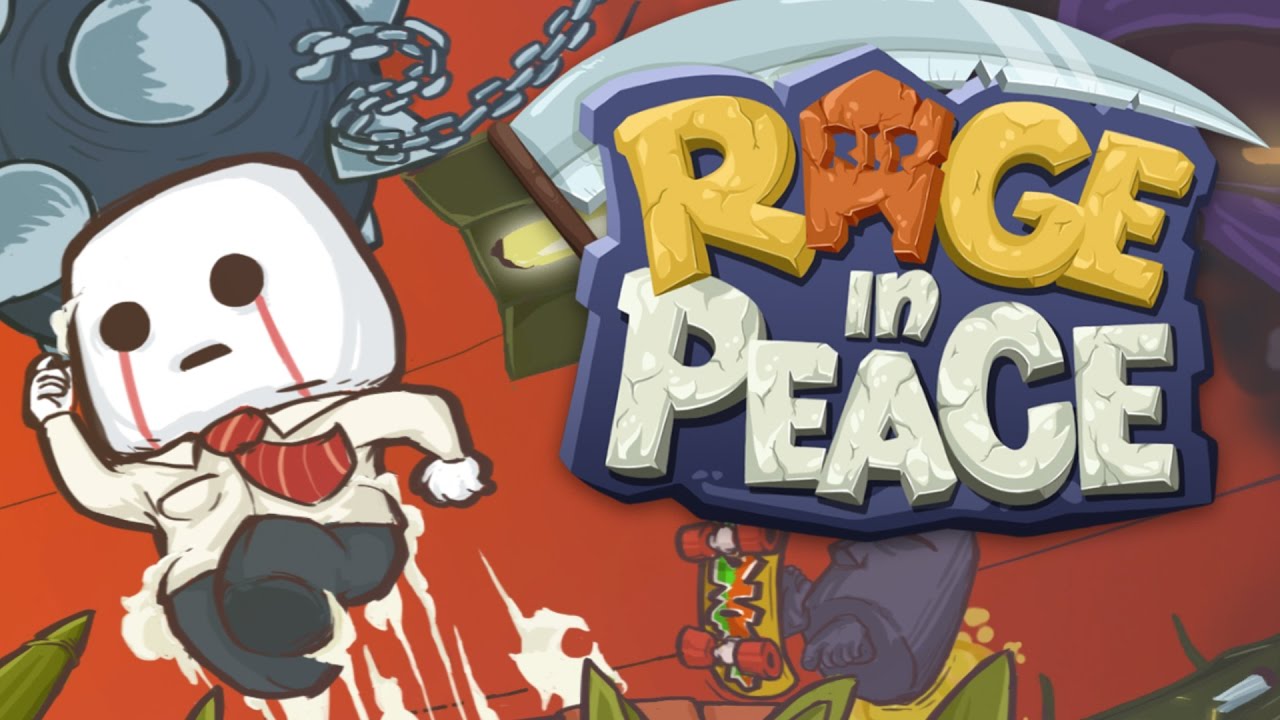 Rage in Peace, rage in agony, however you play games like this, there is one thing you can be certain of: This game will make you rage but for all the right reasons. Welcome to the review of this frustrating yet addictive title. It has been developed by Rolling Glory Jam and published by Toge Productions. It will be released for the PC/ Switch platforms on the 8th of November 2018. 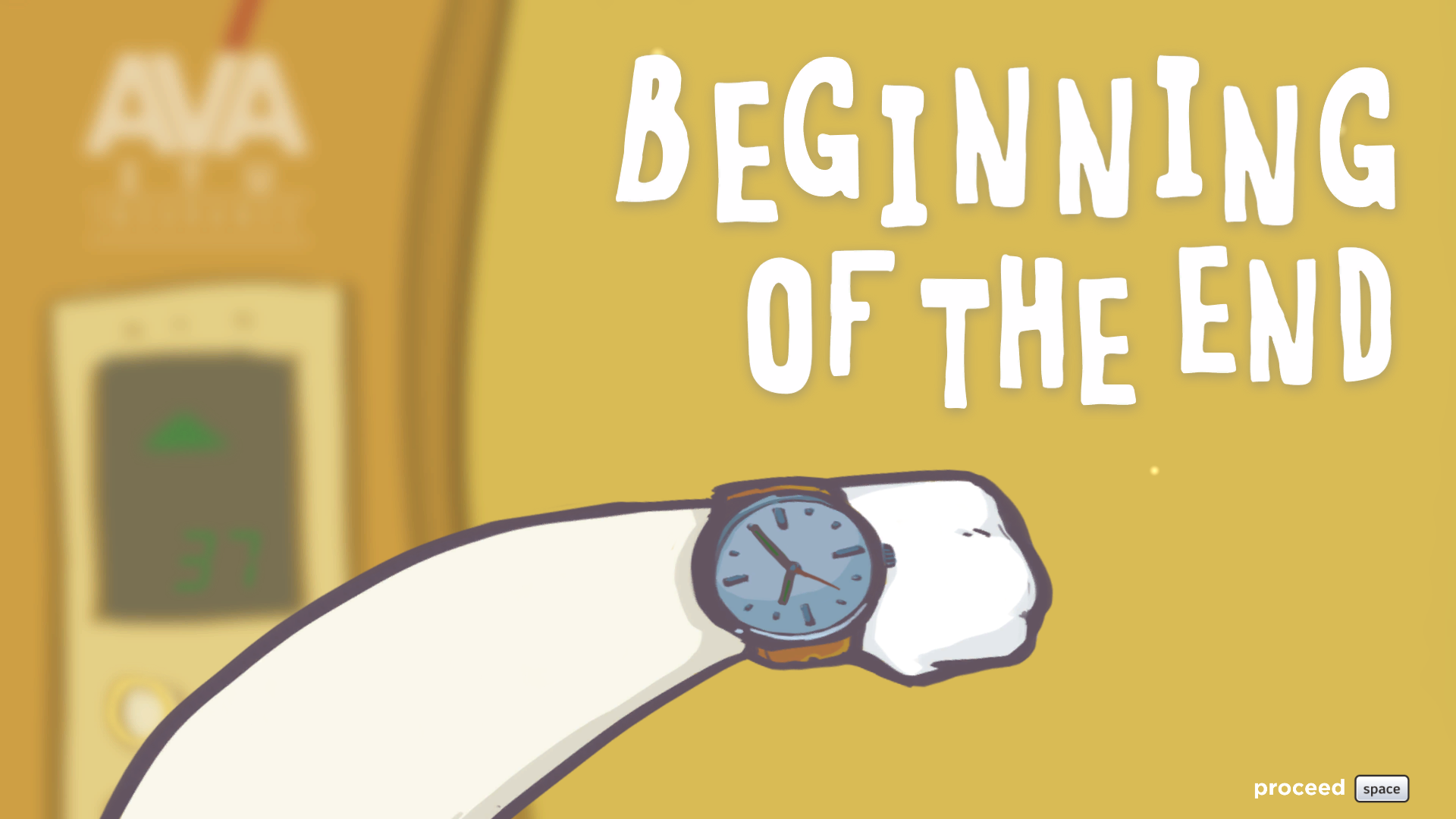 The Story of Timmy

The story is centred around your character, Timmy Malinu, an uninspired, everyday ordinary person who wants to live his life with no drama. But, it seems fate has different plans for him. It’s a race against time for Timmy as he is told that this is his last day to be alive. After getting told all this by the Grim Reaper, you’d think there would be the usual scenario of questions like “why?”, “how?”, and the like. But that doesn’t phase Tim as he’s okay with it. He has but one dream: to be in his pjs at home, asleep in his own bed with no drama. The Grim Reaper has told him that today he’ll die from a beheading, but the where, the how and the when have not been determined. This is where you come in. 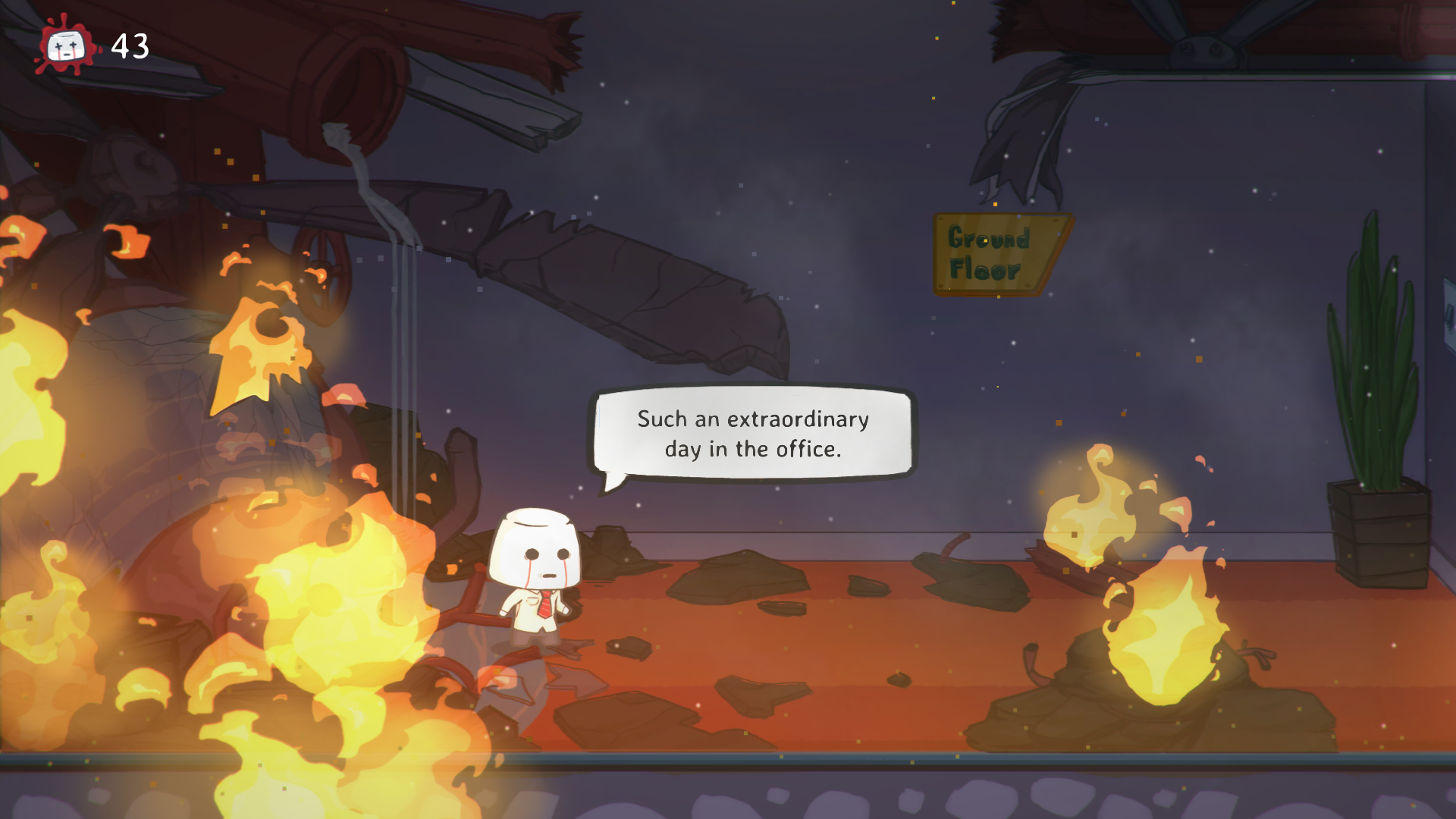 The Universe Is Against You

After having found out that your last day is today, you start off Timmy’s journey to get home, yet the world is hellbent on destroying you from the get-go, giving you no quarter, no respite and certainly no apologies in its relentless pursuit to gun you down. Desks can become things from nightmares, humble ice is razor sharp from conspicuously placed puddles on the floors of your office building. Surely, if this is Timmy’s last day, why is the universe trying so hard to end it sooner? You get to find out the answers to these questions the more you play. 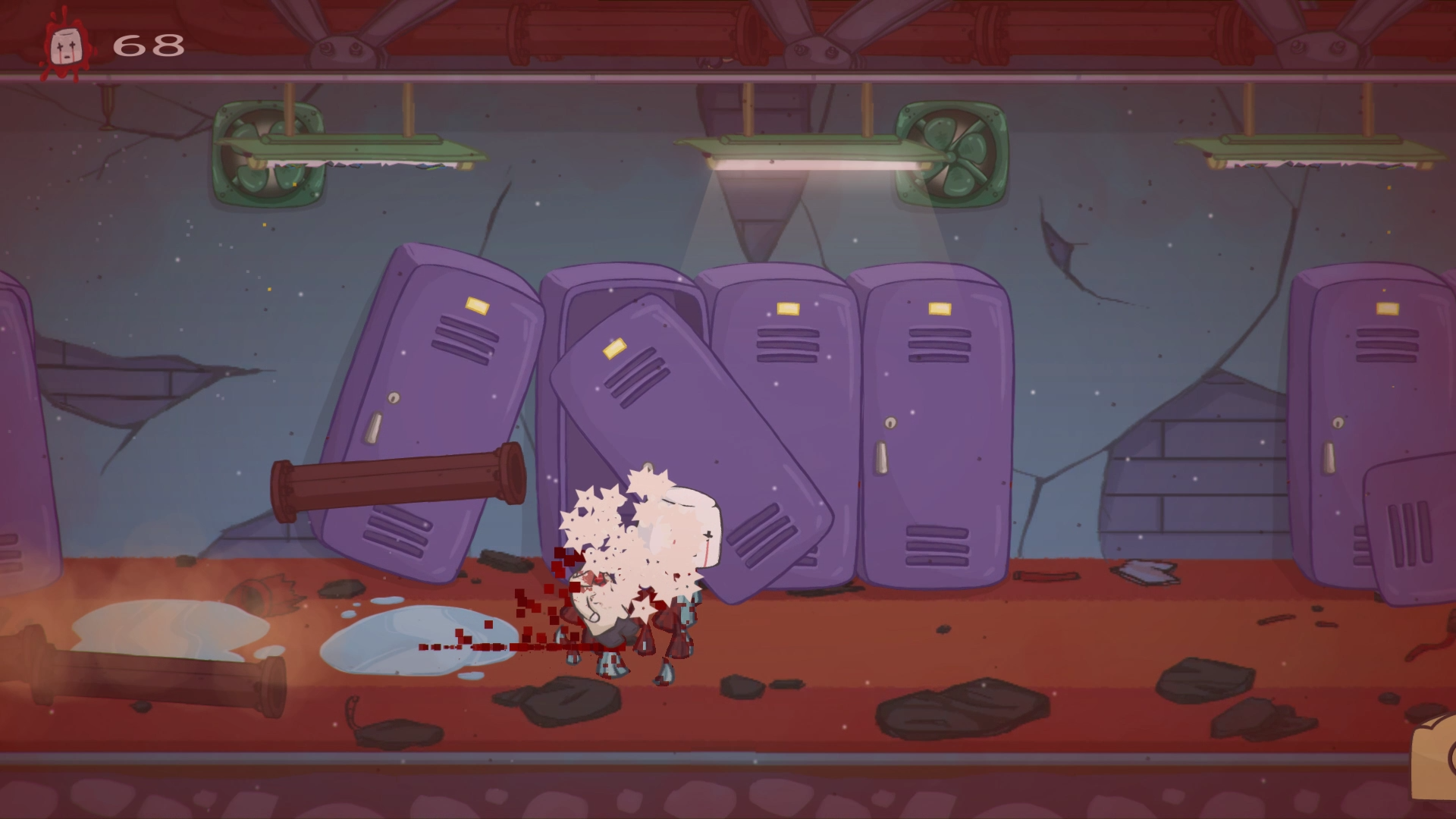 As this subtitle suggests, you need to memorise EVERYTHING, from the placement of traps to the timings needed to avoid certain enemies. Sure, you may be able to avoid a skateboarding statue, but time it wrong, and you may be heading straight for a flying signpost that darts around like a boomerang. Trust me, you will be raging at this point as, in my play through, I have died countless times. Oh-so many times. After you get a certain segment memorised and get to the end, thinking you’ve made it through a level, only to be killed by a falling tree that splits and rockets off into space if you try to jump over it, you’d be forgiven for getting extra upset.

The game has certain charms and elements from the likes of Super Meat Boy and Dark Souls in the death mechanics and cartoon design styles from the likes of Castle Crashers, all of which come together to create a world in which you want to drive Timmy forward segment by segment. As this is a very story-driven game, the story unfolds with every level you manage to painstakingly complete, and every checkpoint reached is a major triumph in and of itself; a momentary respite before you’re plunged right back into the fray, jumping over emo-styled frogs that spit their tongues out at you, which will turn out to be only tricking you into jumping over them where a swinging snake will swing down, which in turn will be followed by a springboard of trees lunging from the air, and just when you’re thinking safety is around the corner, a worm circling the ground appears and eats you up (long sentence, I know, but this is a perfect example of just how much you need to memorise to survive). 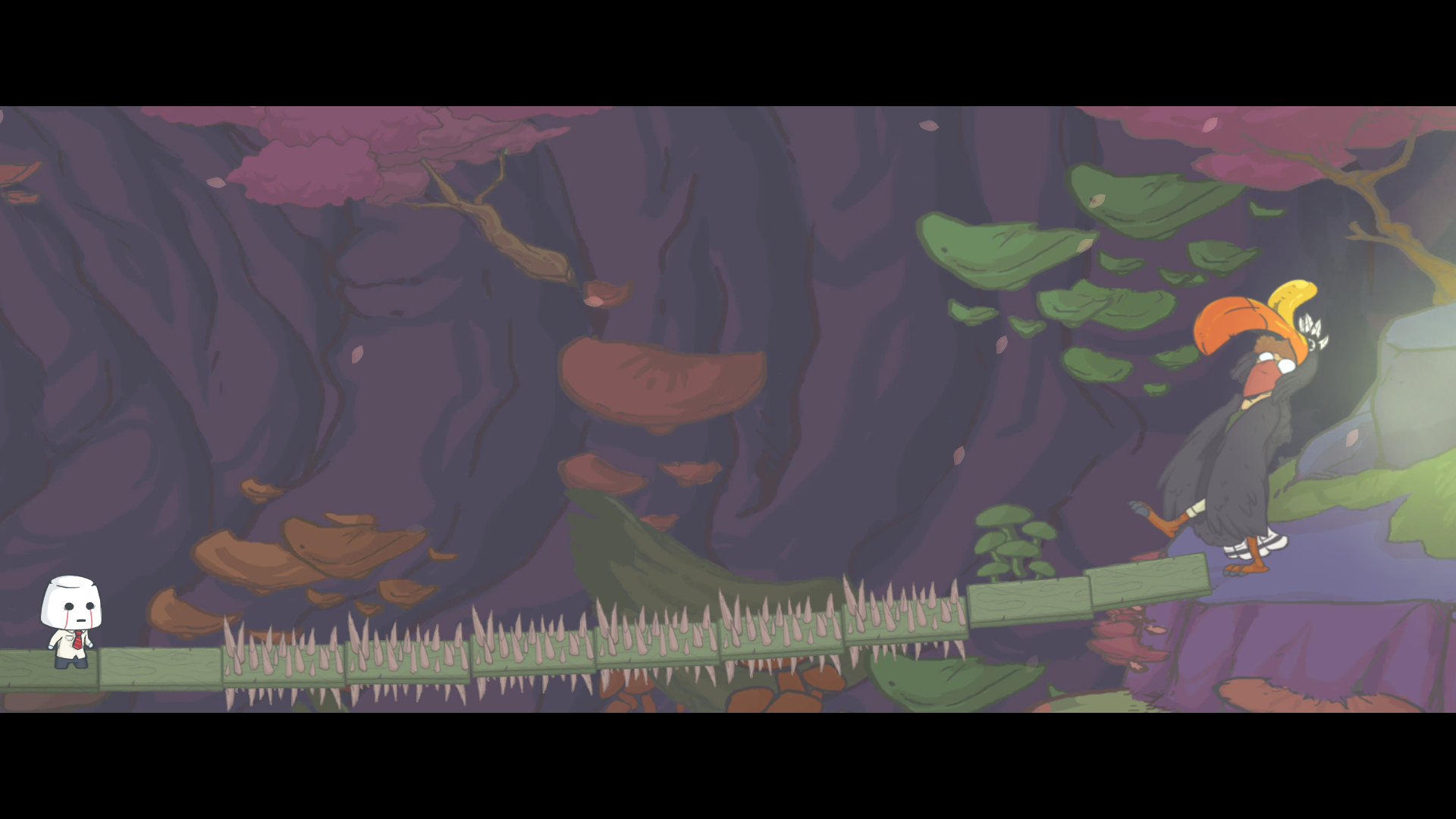 Having played this title for a good while, I have tried both support for controller and keyboards, and I’d have to say that the controller wins. It feels much smoother to use a controller than to use the keyboard as the support for keyboard configuration is strictly limited to the arrow keys and space bar. I would have liked to have been able to map some keys as I’m used to having my WASD keys for movement, but they are limited to the arrow keys. This is in contrast to the character’s limited move sets as you can only get to move from left to right and jump. That’s it. No special fireball attacks, no flashy quick step. Simple controls for a simple guy. It’s how you use these controls in the unforgiving environments you find yourself in, that will determine if you survive. As I have previously mentioned, it’s all a big memory test, albeit an insanely hard, nail-biting test. If you can memorise the levels you play by trial and error, you will manage to get through. The key is to just have patience. And for me, I’m surprised I managed to last as long as I did.

As you progress through Timmy’s story, you’ll get to meet a whole host of characters that interact with Timmy on his adventure. They challenge his perceptions of the pickle he’s found himself in. But, I won’t say anymore of them as this will rob you of the pleasure of meeting them as these characters are milestones within the levels you play, adding to the story development. My favourite character by far is the Grim Reaper that has been assigned to you. He’s funny, witty and ever so fiendish but not too much of any aforementioned traits where it comes off silly or just plain weird. 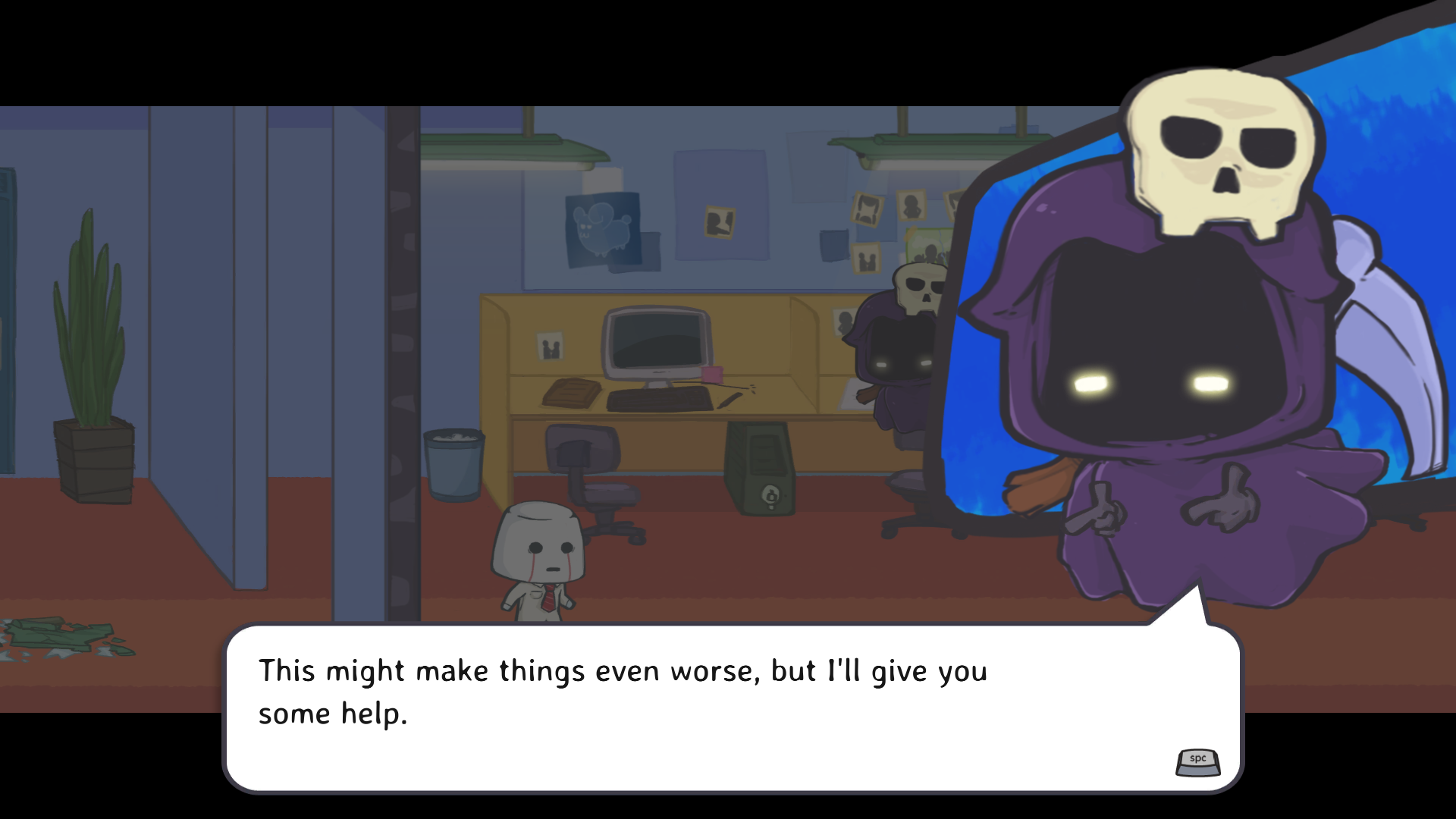 I would say that this title is a must for hardcore gamers. It has great appeal to casual gamers too looking to see how much of their gaming prowess can be tested. But, if it’s too much, there is an easy mode you can enable. This change helps you come to grips with the game more easily by adding more frequent checkpoints. As for the hardcore gamers, the difficulty of the game will have the “just one more go” element, which is the main driving force to keep you wanting to beat the next section and to see what happens next. Persist with it, learn the timings, learn the tricks and you’ll soon be on your way to completing each level and unravelling the story that surrounds our dear Timmy on his quest back home. 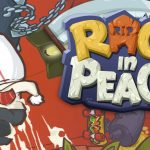 Rage in Peace is a game that will push your patience to the limits. Through trial and error, you will repeatedly die as the pitfalls of each level are random and can be quite tedious at times. But, if you can stick with it, learn the timings and memorise the level designs, you stand a chance of getting Timmy back to his home to fulfill his wish. You can always turn the difficulty down, but you wouldn't want to do that. Would you? 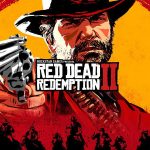 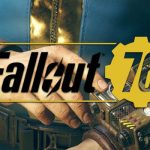