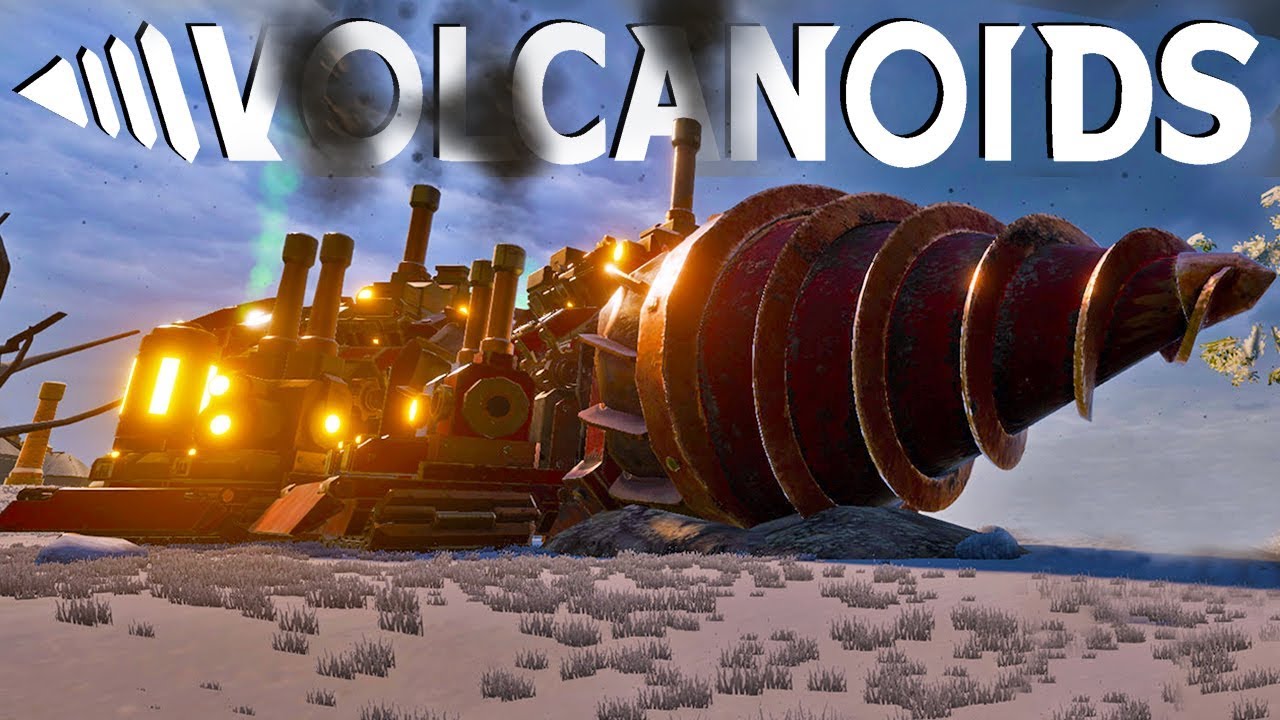 I’ve played many sandbox open-world survival games in my time. Take games such as Rust, State of Decay, Subnautica, The Forest, Day Z, 7 Days to Die, the list is endless. Every developer has their own twist on the genre from the apocalyptic to the futuristic. Each game with their own sets of challenges puts forward questions and unique situations to players. How will you survive in this scenario? How will you overcome these challenges, etc., etc. So, it’s a nice surprise to see a developer tackle the steampunk influence and mix it into this genre, resulting in the game that I’m currently writing about, Volcanoids. This is also the name of the developers and publishers as they are a three-person team. Released on the 29th January 2019, this title is still in early access, so I’ll be reviewing this game as it stands with hopes for the future, etc. Sound good? Right. Let’s dive into this world, shall we? 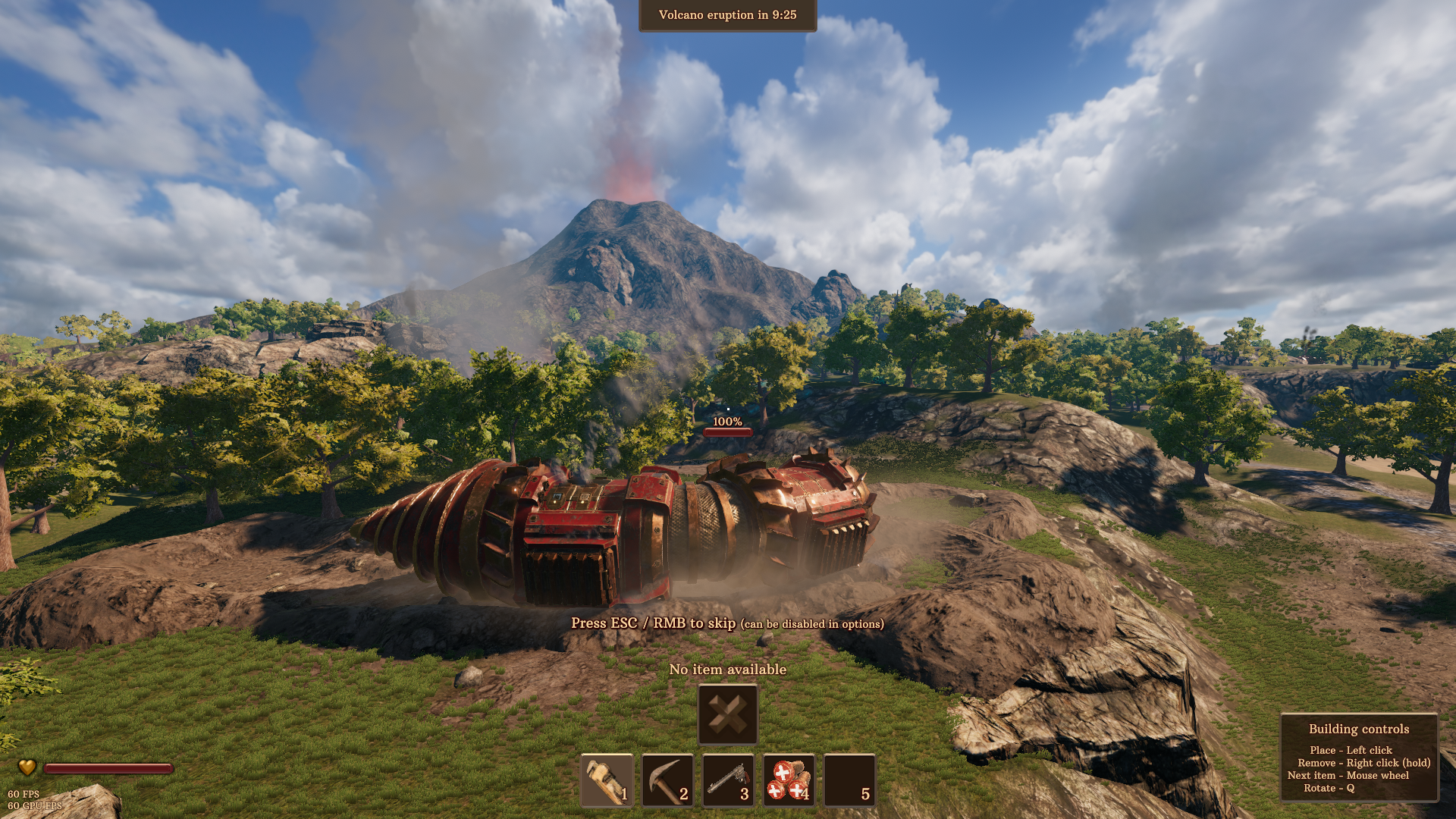 The premise of the story is that you live on an island that has been invaded by steampunk-type mechanisms, soldiers and the like. You have been ousted from your home, and when the opportunity arrives to return, you’re one of the first people coming back to the island to see what has become of your home. Now, with this return you can see that the island has enemies everywhere roaming the countryside. All enemies are on patrol, running around like lost lambs, all in the shadow of a huge active volcano in the middle of the island. To say that this volcano is big is an understatement. It dwarfs the horizon. What’s more, this thing goes off regularly too. So, it plays a huge role in how you survive, which brings me onto my next topic quite nicely. 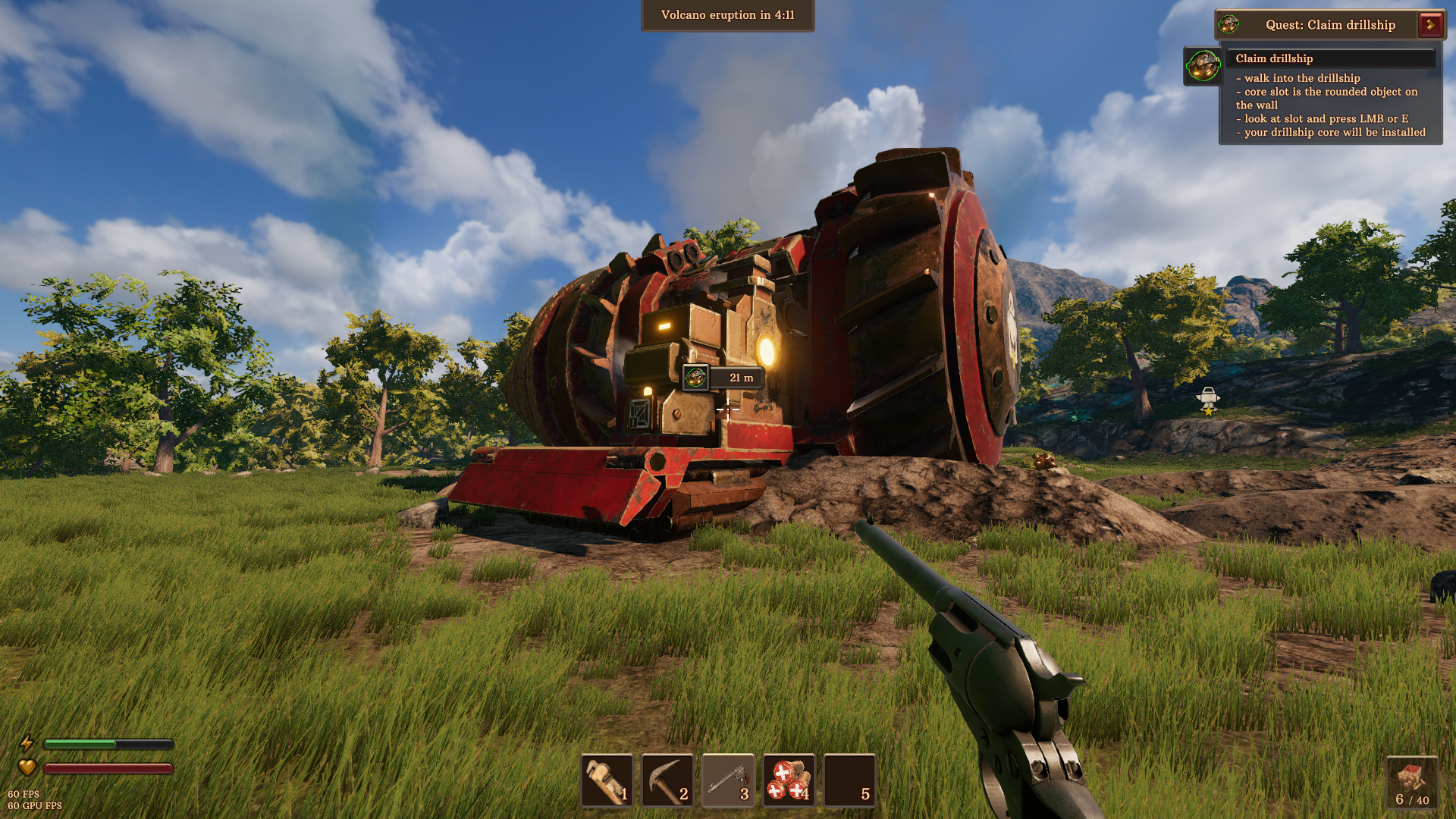 You start off with a land ship with all the basics you need to survive. But, it’s only the basics. To really take it to the enemy, you’ll need a drill core. What’s that, you ask? Well, to put it simply, it’s like a mobile version of the ship being used in the film The Core. That’s the best comparison I can make. In this game’s instance, it can travel through the ground as it’s got a huge drill on the front that lets it burrow underground. How you come across one of these is explained in a set of tutorial missions that go over the basics of the game, which goes over what you need to mine in order to collect gear to advance your own drill core, which in turn will allow you to explore the island that was once your home.

It does this with simple to follow instructions, and you can take this at your own leisure. And when I say leisure, what I really mean is at the leisure you set for yourself. With the volcano, you are given options as to how difficult you want to make things for yourself. You can set the timer for the volcano to easy so that it goes off every 50 minutes, or you can set it to very hard so that it goes off every 16 minutes. Due to the frequency of the volcanic eruptions that you can set, you can imagine that getting your drill core is vital. Slam the doors shut and dive underground to avoid the eruptions, which you can view from the safety of your ship via its periscope. The view is quite something to behold. 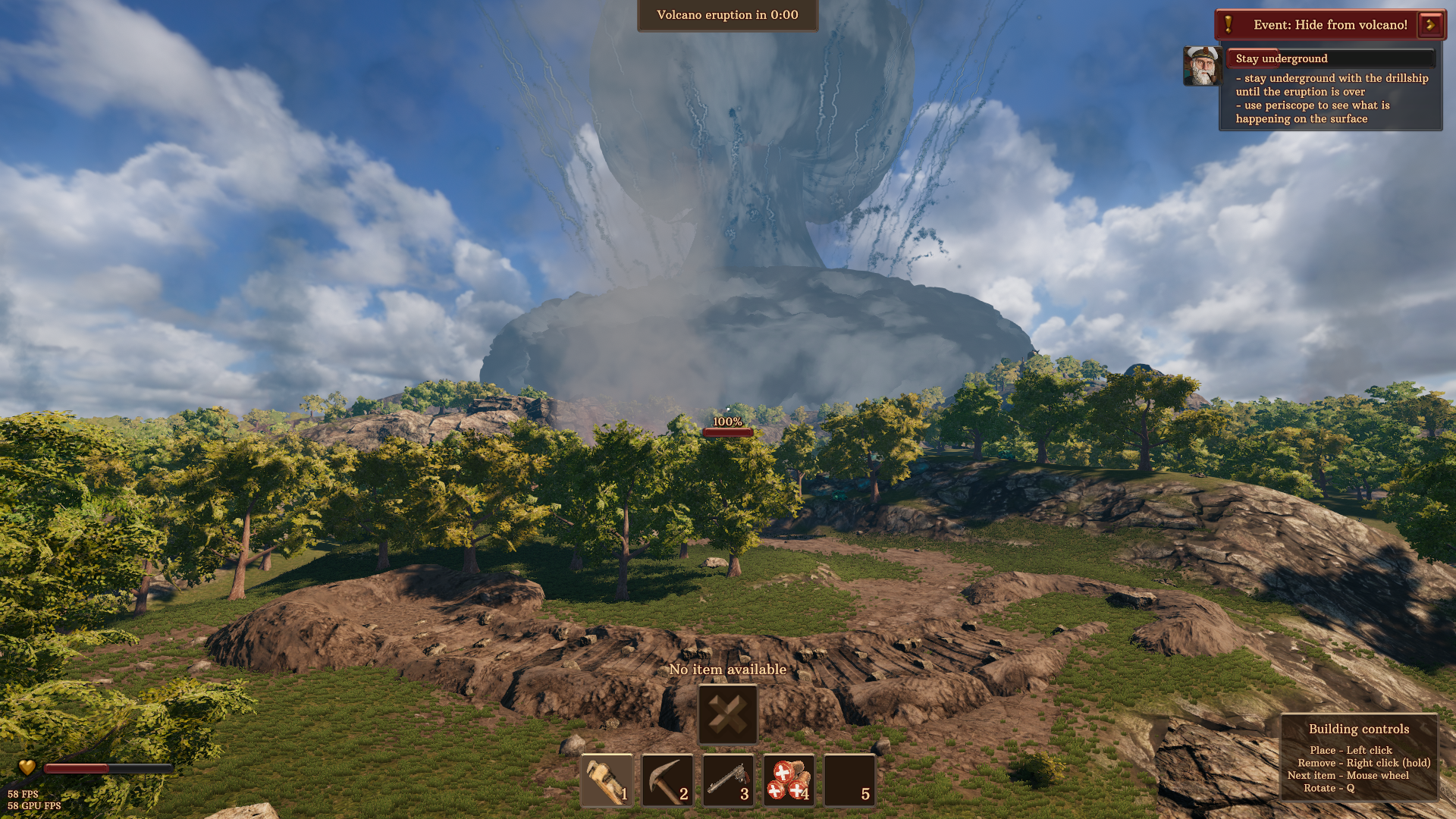 Now, onto the nitty-gritty of the game. The filling in between the nice layers that I’ve gone over. As I mentioned at the start of this review, this title is still in early access, and it shows. But, that’s not to the game’s detriment. From what I have played, I’ve really enjoyed my time in this world. But, it did take me a good few hours before the game “clicked” for me. I was confused by the crafting system to start with. My drill core had the necessary components in the ship ready for me to go. But I kept getting confused as a lot of running between stations saw me not realising that I could simply re-arrange the ship to my liking. Once I found this out, it become easier to navigate what I needed and in what quantities.

Deposits reside all over the island, from copper ore to coal, sulphur and scrap metals. These things make up the bulk of what you need to successfully keep your ship ticking over. They also form the ingredients for your gear, research and tactical deployments that will keep your ship safe from other mechanical robots that now inhabit this Island. 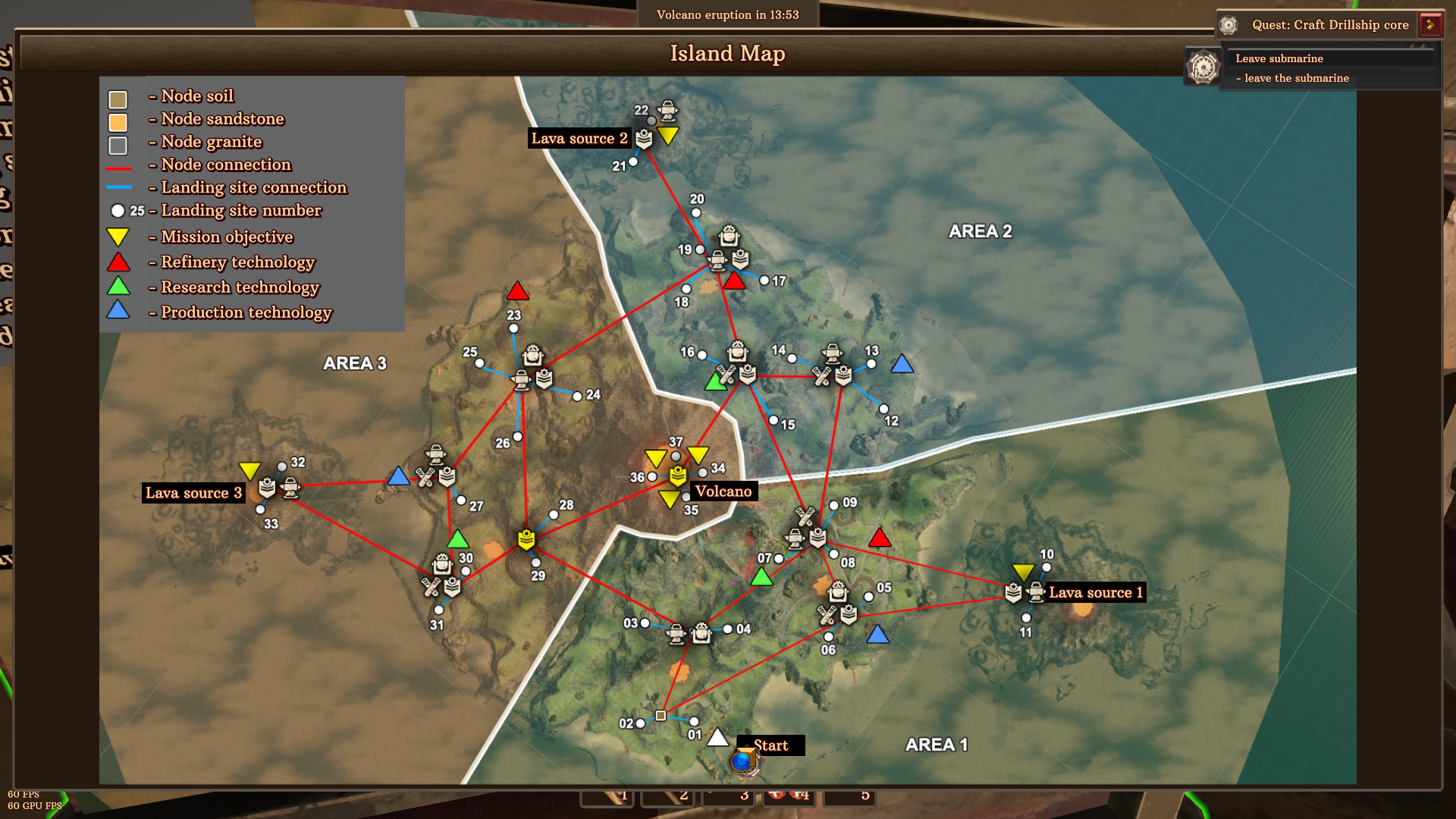 The island has three distinct zones, and the only way to progress is to go from site to site and raiding other drill cores on your way, which in turn can be added to your own ship. In doing so, you make your ship stronger. You’re able to research new tech that will increase your productivity so you can make better gear and travel further distances. This will become necessary as the enemies do get tougher the further you go. Stronger weapons are also a must when travelling further as you’ll have to plan your trips between the volcanic eruptions. Time this wrong, and it’s game over. Yep, it’s that simple. Get caught out and about during an eruption, and the game’s over. You’ll have to reload from your last save point. So if you didn’t time it right or are too far from your ship, you’d best hope there’s another ship nearby to hide inside of until the next eruption has passed. 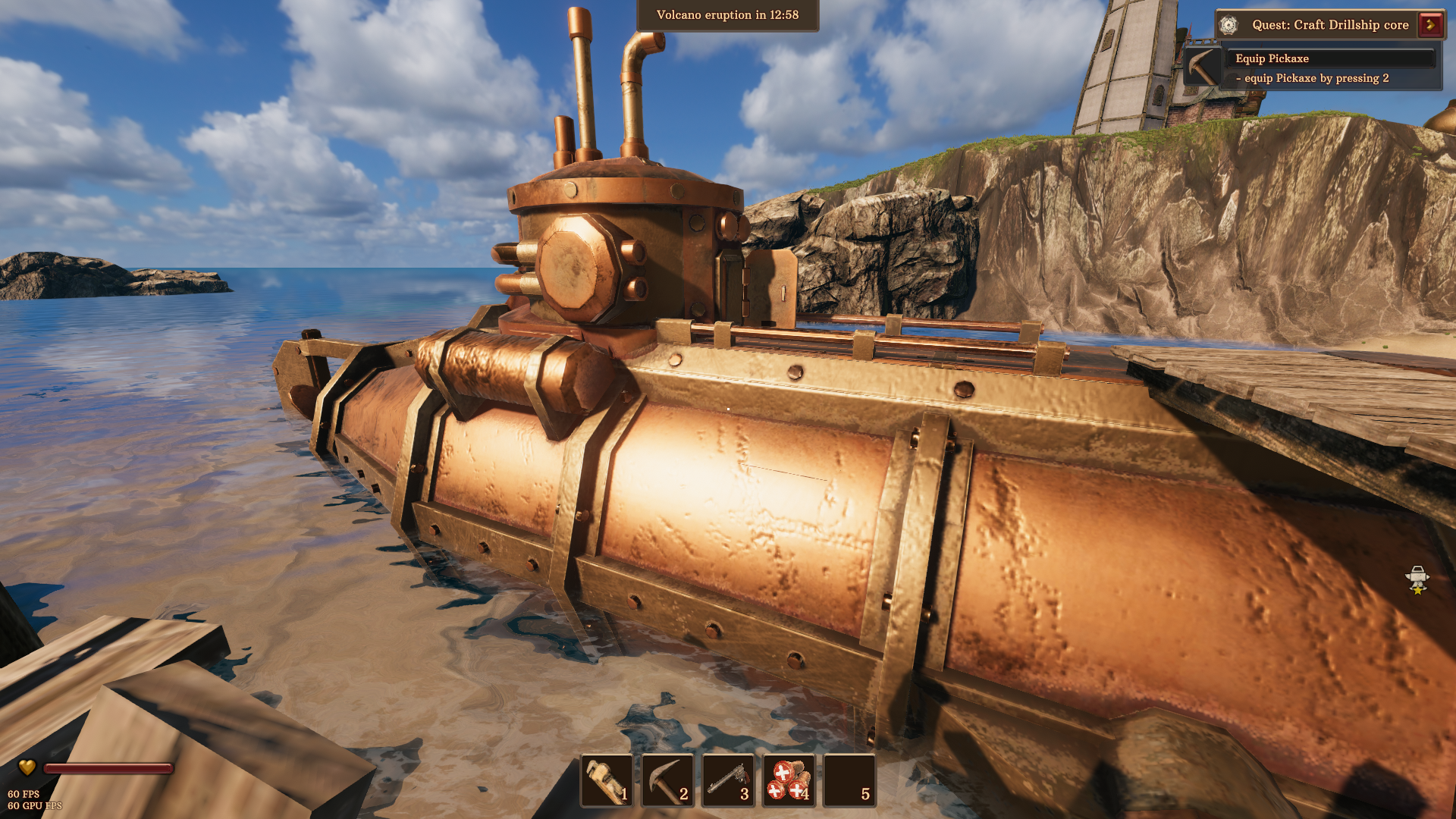 Points to Bring Up

Now for me, the are a few points I will bring up as I feel they need addressing. They are as follows: combat, gunplay and the environments. The reason why I have listed these is because they need more work. The game is still in early access, so these features can still be worked on, but when roaming the wilds, the enemies were always pin-point accurate, no matter the distance. I could be running away from the mechanical beasties, and they’d be right on my heels, every shot hitting, regardless of my dodging. Trying to find the time to heal became a real grind as they were always running for me, never giving up the chase.

So for me, this needs looking into. The gunplay also needs work, like being able to see down the sights of your weapon would be nice in order to provide more weight to situations and let you accurately dispatch enemies more quickly during raids on enemy drill cores.

The environments also need work; there were many occasions where I phased right through the terrain, which completely took me out of the world’s immersion. Also, the buildings on the island are there as placeholders only. Other than looking pretty, you can’t interact with them or go inside them, which is a real shame. I would like to see what I can find inside some buildings to help me further my goals. 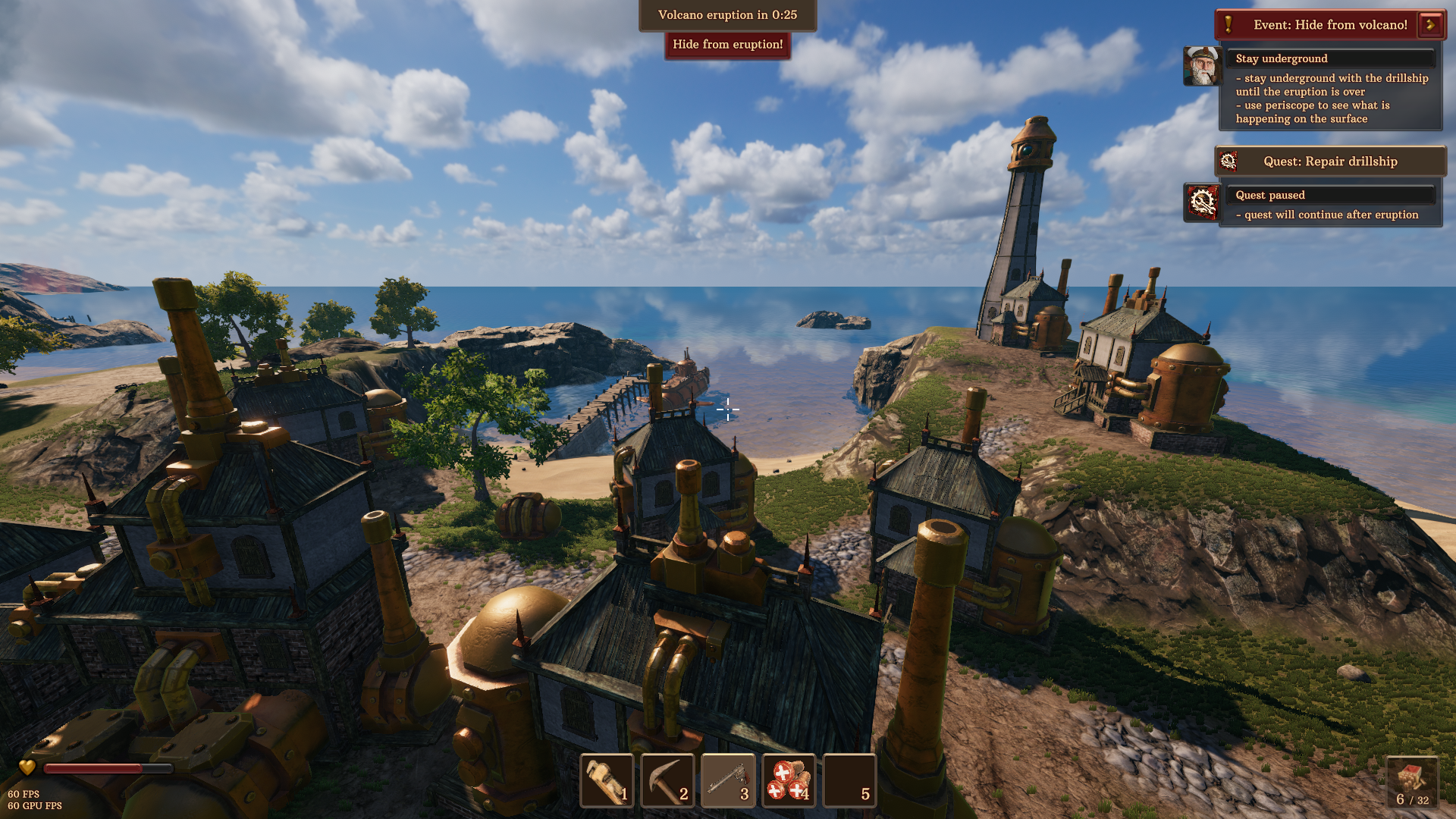 Now, I understand that the volcano going off is a game mechanic to help manage time, but after it destroys the environment, the game world grows back like nothing ever happened after a certain amount of time. Instead of the volcano going off every time in all directions, maybe have different types of eruptions. Have certain countdowns to where certain zones of the island become much more harsh and where the enemies are tougher. This will force the player to move to another zone sooner as they have a limited amount of time to really add to the fact that your base is mobile and can go anywhere.

But, these are my personal concerns and thoughts when playing the game. Overall, there is a solid foundation for this game to really grow, and it will be interesting to see where things go from here. For the price of £15.49 on Steam, this is one game to keep an eye on. I’m looking forward to its furthered development. 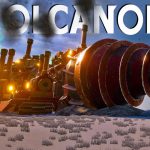 A steampunk survival game in where you pilot a drill core/land ship to defeat the mechanised armies that have taken over your homeland. Travelling from spot to spot, you venture forth in search of materials to further your own drill core's expansion efforts and take the fight to the enemy. But, it has elements that need work in terms of combat, gunplay and environments, which make the exploring/battling elements a bit flat. But, as it's still early access, don't count this game out as there's plenty of opportunity for it to grow given more time. Definitely one to keep an eye on. 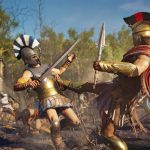 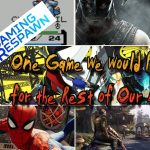