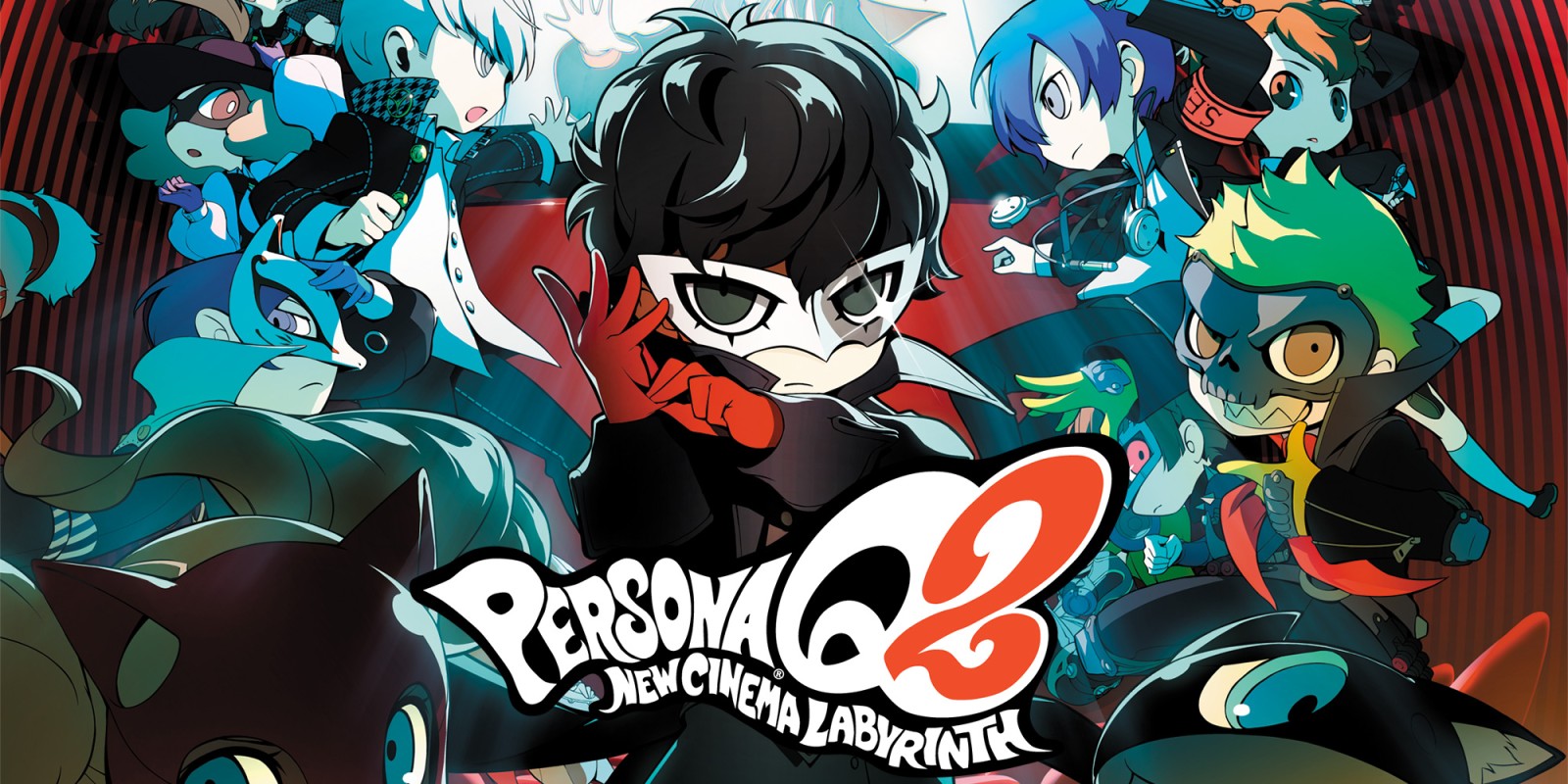 The 3DS has undoubtably been one of Nintendo’s best consoles of all time. From launch to now, the system has had some of the big N’s greatest first-party output in their console manufacturing history spanning a huge variety of genres. Unfortunately, all great things must come to an end someday, and with the Nintendo Switch now over two years on the market, the Nintendo 3DS was sure to fall from grace one day. While Nintendo’s support arguably ended in 2017 with Metroid: Samus Returns and Pokémon Ultra Sun and Ultra Moon marking their last major new titles for the system (followed by multiple ports since), one element of the 3DS’s incredible legacy should not be undervalued – it’s incredible third-party support. The kings of 3DS third-party support were and have always been Atlus, primarily starting with Etrian Odyssey IV: Legends of the Titan and the incredible Shin Megami Tensei IV, leading to a combination of the two with Persona Q: Shadow of the Labyrinth in 2014 (the franchise’s first appearance on a Nintendo machine) and now coming full circle with Persona Q2: New Cinema Labyrinth, which is arguably the 3DS’s final big third-party title. Thankfully, it’s one of the system’s very best JRPGs and surpasses its predecessor in almost every way. 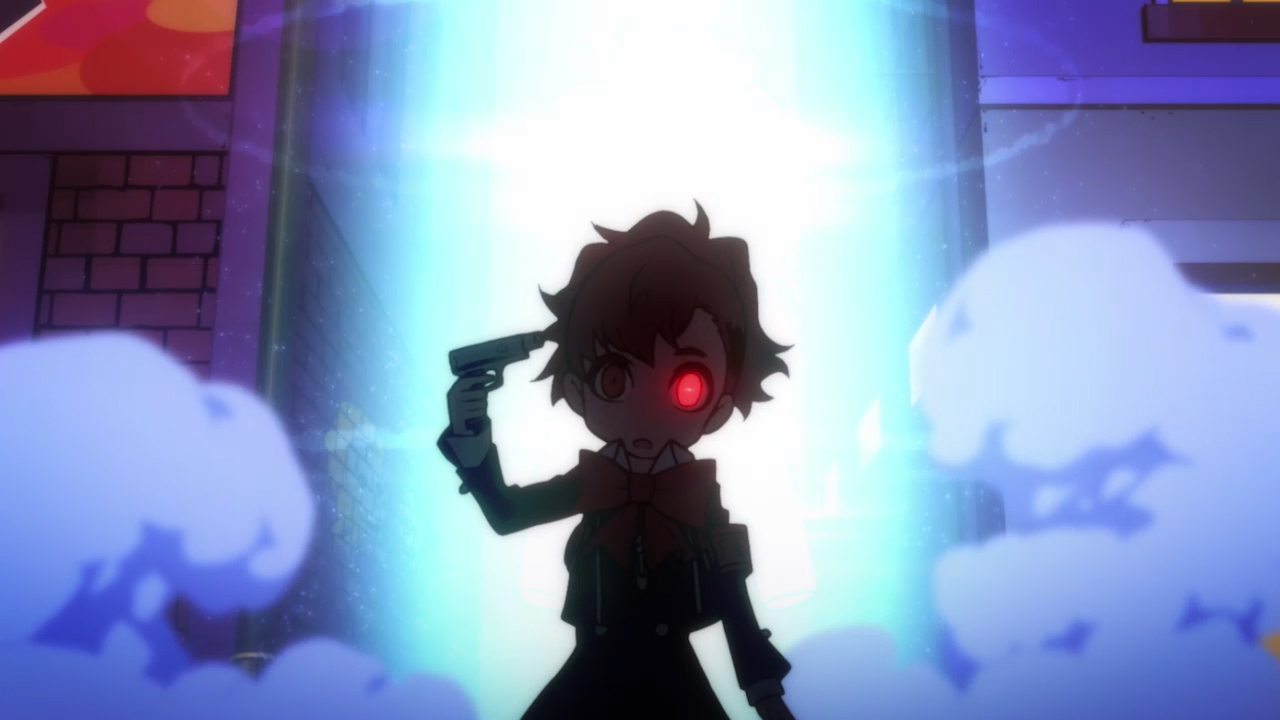 Persona Q2: New Cinema Labyrinth follows Persona 5‘s beloved Phantom Thieves who, while setting out to explore Mementos, are suddenly teleported to a mysterious cinema where they meet a socially anxious girl named Hikari and the woman in charge of the cinema, Nagi. Soon, the Phantom Thieves learn that the theatre is screening a film titled ‘Kamoshidaman’, a film portraying a previous enemy of theirs from Persona 5 as a superhero. Stranger yet, the ‘protagonist’ has taken their teammates Makoto and Haru hostage, and Nagi informs them that they must travel into the film in order to save their friends and hopefully discover how they ended up in the cinema and how to get home. Throughout the story the cast grows as the crew encounters the female protagonist from Persona 3 Portable, the Investigation Team from Persona 4 and the S.E.E.S. team from Persona 3 that are also trapped inside the cinema world attempting to return home. 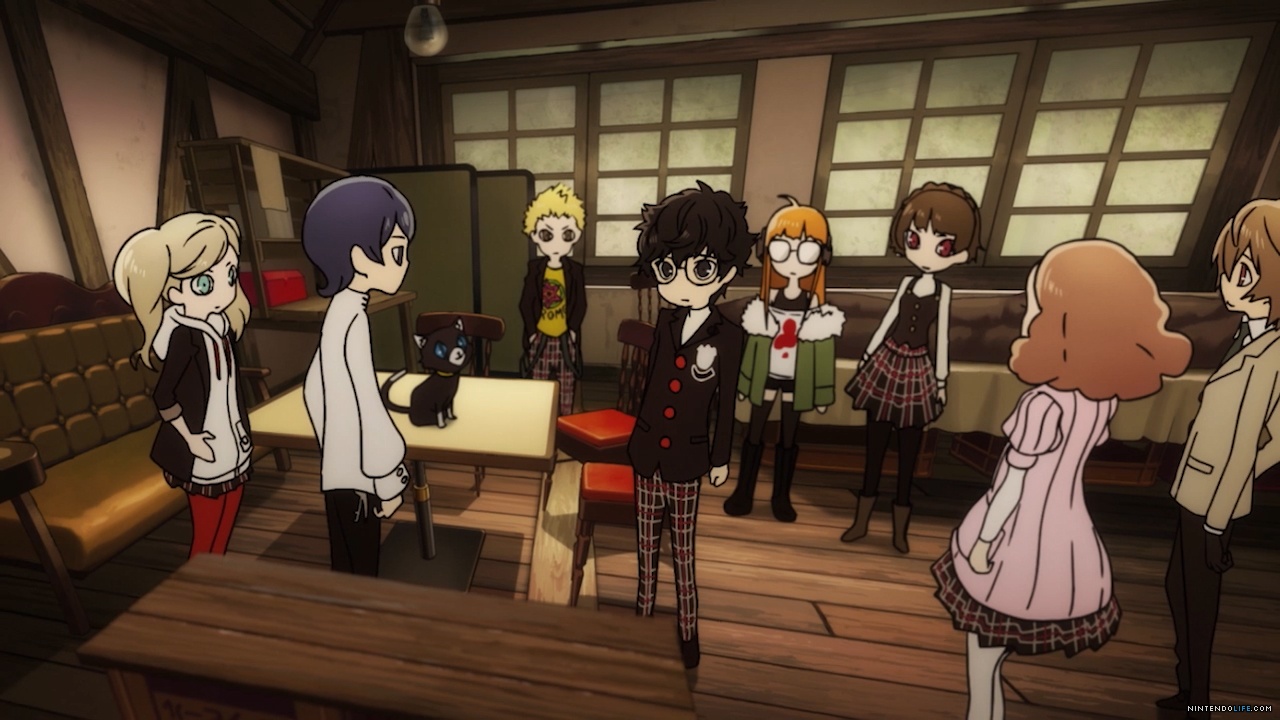 If you played Persona Q: Shadow of the Labyrinth, this setup will sound strangely familiar to you and, like that game, the chronological placement of the story makes no sense whatsoever, with the game fully embracing its non-canonical nature in exchange for a fun crossover between Persona casts (despite, of course, the first two entries in the series). An element of Shadow of the Labyrinth that caught me and a lot of players off-guard was its surprisingly dark story masked by its cute and charming exterior. This does soften the blow a little when Persona Q2 does eventually take a dark turn narratively; however, rest assured that the story told this time around is great and made even better with the inclusion of Persona 5’s crew. It’s not quite as great as the first time around, but the cast makes for a wonderful ensemble, even if the new characters never quite match Shadow of the Labyrinth’s Zen and Rei. Another disappointing aspect when compared to Shadow of the Labyrinth is the removal of the ‘P3 side’ and ‘P4 side’ story scenarios. Upon starting the original title, the player would have the option of playing as the protagonists from Persona 3 or 4 and seeing the story from their perspectives, instead, because of the sheer number of characters (and protagonists), PQ2 unfortunately skips this entirely. Understandably, the 3DS may not have been able to handle the complexity of having four separate opening dungeons, but then again, Persona 5 is front and centre throughout this title. 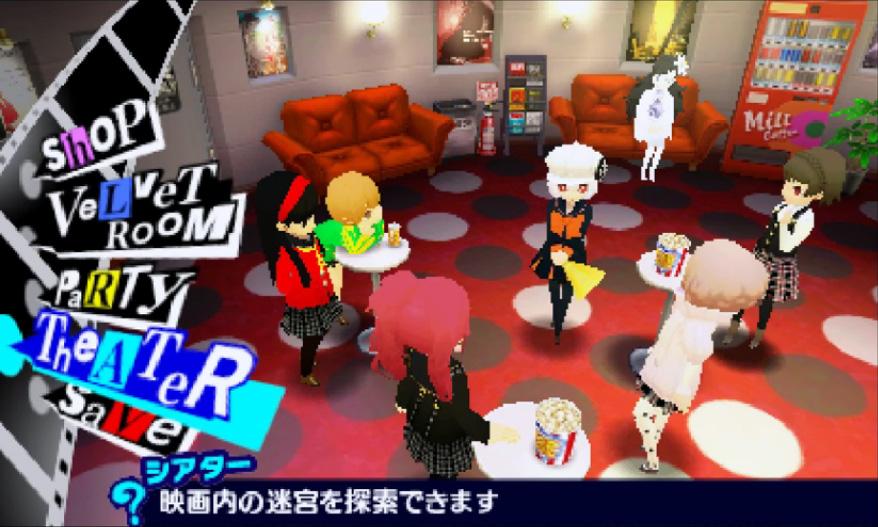 Being made with the Etrian Odyssey framework, Persona Q2 is also a dungeon-crawling JRPG, but unlike the main entries in the series, Persona Q2 instead shines a spotlight on the pure dungeon-crawling elements. The top 3DS screen is dedicated to exploring a full 3D environment and solving environmental puzzles, while the bottom screen is used for mapping out the dungeon, tracking where the player has been, what has not been explored, and where puzzles and their solutions can be located as you delve deeper into them. It’s a fun exploration tool that separates it distinctively from other entries in the Persona and wider Shin Megami Tensei series and, even better, takes full advantage of the 3DS’s unique functionality. It’s clear from the get-go that Persona Q2 is a title that simply could not exist on another platform than the 3DS without fundamentally different game design.

That leaves the combat, which will seem more familiar to series fans, more or less retaining the core Shin Megami Tensei ‘press-turn system’ of combat in which the player exposes the enemy’s elemental weakness and receives an extra turn in combat and vice-versa. However, this time around, exposing an enemy’s weakness will instead grant the player a ‘boost’ instead of an extra turn, simply because this time all moves must be planned out before they are executed, akin to how Persona 1 and 2’s battle systems worked. Boosts grant the party member the ability to use certain physical and elemental attacks without spending any HP or SP and can be chained together to gain an advantage over the enemy. Navigators like Futaba, Rise and Fuuka can now assist the team during battle through use of their own skills that charge up depending on how the party performs during combat. These skills include restoring a small piece of HP after every turn or granting the entire party stat buffs. Again, the combat is familiar enough that returning players should be right at home but distinct enough to separate itself from being a cheap imitation of the regular Persona battle system. Throughout their journey the gang will face off against the usual enemies, bosses and F.O.E.s, exclusive to the Persona Q series. These are giant, overpowered enemies that act as obstacles on the map that the player must avoid; encountering one head-on will result in a battle, but due to their overpowered nature, it’s wise to go into them prepared for the worst. This isn’t to mention the rather ridiculous difficulty spikes the game will throw out at random. Ten hours into the first dungeon, the game was rather smooth sailing for me until I encountered the main boss of the dungeon, which was so incredibly difficult that after over five hours of grinding was still brutally difficult. Eventually, grinding becomes a gameplay mechanic in New Cinema Labyrinth, which is no compliment for any JRPG. 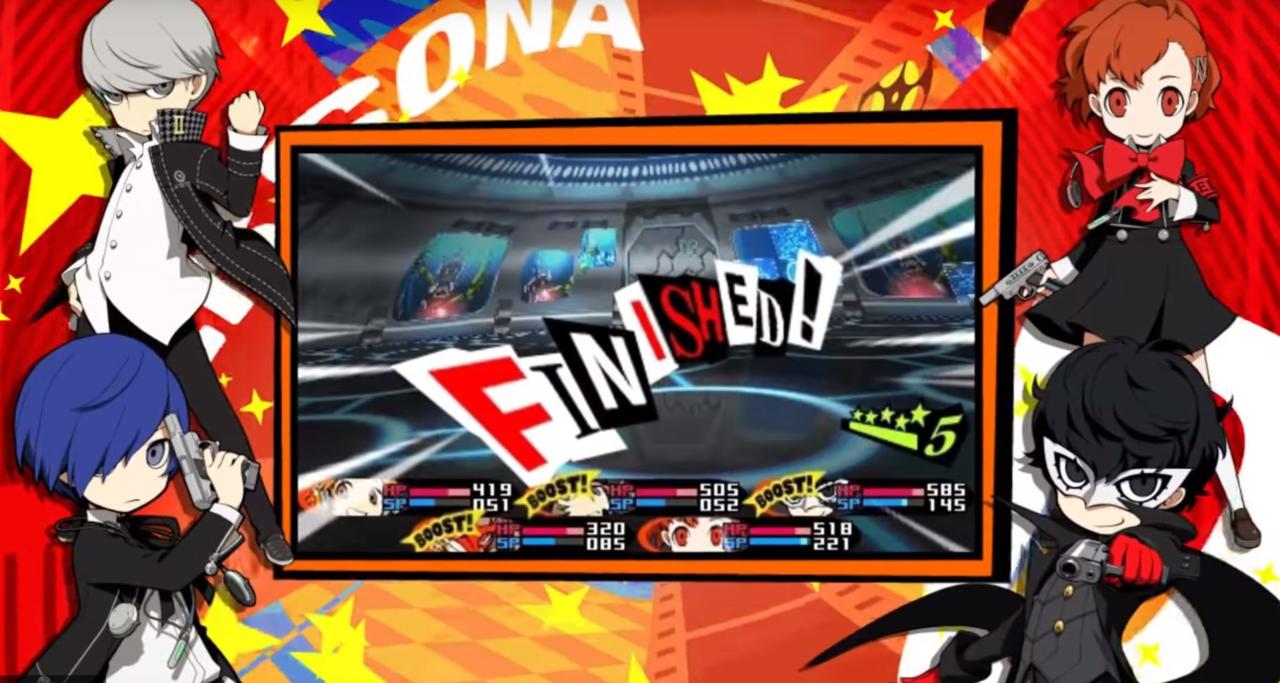 It wouldn’t be Persona without the Velvet Room, despite the fact that it’s main resident, Igor, is nowhere to be found this time. Instead, the Velvet Room is populated entirely by the likes of Caroline, Justine, Margaret and Marie, with Elizabeth and Igor acting as merchants in the item shop. Caroline and Justine return to fuse Personas for the player and keep a record of them in the compendium, while Margaret sacrifices Persona so that the user may power up another in their possession, and Marie is in charge of the game’s StreetPass mechanics that allow players to share Persona together (that I doubt will ever be used by anyone…back to the poetry, I suppose). The key difference here is that the protagonists of each game are no longer the only ones capable of possessing multiple Persona. As a matter of fact, every party member (including navigators) can now possess two Persona each, meaning each party member can wield two different types of attacks. Physical teammates can be paired up with magic Persona, and defence users can also be paired up with physical Persona, adding an extra depth unseen in any other Persona game. The introduction of this element isn’t handled perfectly, especially with the very limited capacity of Persona the player can hold. Therefore, by the time the P4 cast join, I found myself having to remove equipped Persona from party members I was putting in reserve and equip them to the new members, a monotonous process that would have been negated by allowing the player to recruit more Persona from the start.

Persona Q’s most noticeably distinctive feature in comparison to the other entries is the endlessly charming and adorable art style, one undoubtably made to meet the Nintendo 3DS’s graphical limitations while also looking attractive in its own right. The designs and models for the P3 and P4 cast remain the same from the first title, but this time the P5 cast has gotten the makeover and this, combined with the overall more focused and creative dungeon designs and backgrounds, make Persona Q2: New Cinema Labyrinth a vast improvement over its predecessor graphically. This is also assisted by the completely revamped UI made to match the now iconic Persona 5 style. This style lends itself brilliantly to the game, showcasing Atlus’s incredible visual style and artistic talent; however, in some ways it does hurt the game in a way that didn’t affect Persona 5, and that is because of the 3DS’s 240p resolution screens. At times, the design of the UI can be so good that it blends a little too well into itself, and in some cases it wasn’t even obvious to me that some parts of the menus could actually be interacted with as opposed to being part of the general flair of the design. Thankfully, another element that has endured through the Persona series to this game is the incredible soundtrack, which Persona Q2 has in spades with in-house Atlus composer Atsushi Kitajoh taking over from series composer Shoji Meguro this time while also bringing back all of the vocalists from Persona 3, 4 and 5, including Lyn and Lotus Juice, for yet another glorious Persona soundtrack that compliments the series perfectly and one fans won’t want to miss. 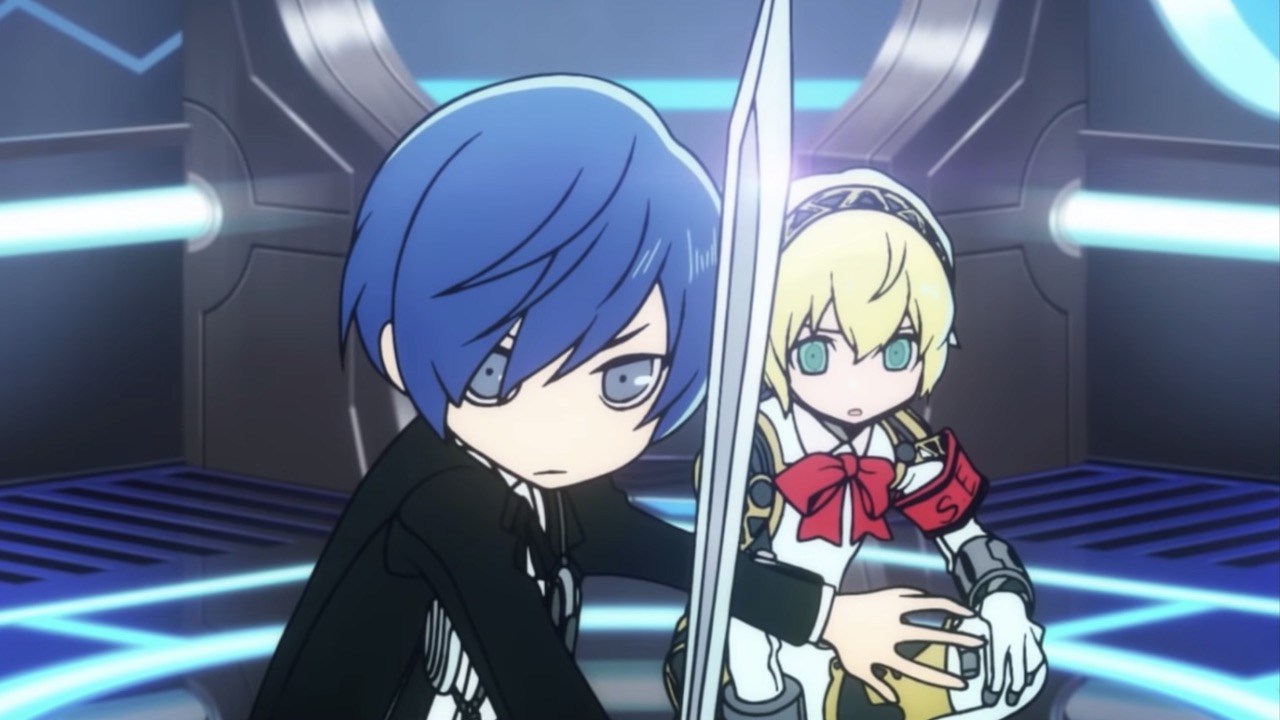 Unfortunately for Western fans of the Persona series, Persona Q2 is lacking one major element that left the whole experience feeling somewhat undermined for me. That is, of course, that this is the first Persona game in a long time to lack any sort of English dub. It’s underwhelming for players such as myself that have become accustomed to the English casts of these titles and those of us that have emotional investment into these characters, so seeing them without their recognisable voices is upsetting. This isn’t to say anything negative about the Japanese cast, they are great, but they’re not the voices we spent 50-plus hours with in P3, P4 and P5, respectively. The exclusion of an English dub is, however, understandable when discussing a 3DS game releasing in 2019 with almost 30 playable characters.

Ultimately, Persona Q2: New Cinema Labyrinth is an exciting and refreshing jump back into Atlus’s wonderful series with a fun story full of excellent characters from the series’ three most popular entries (sorry, P1 and P2 fans). The dungeon-crawling gameplay is far better paced and refined from the previous title, despite the wild difficulty spikes frustratingly remaining. The lack of an English dub is disappointing, but it doesn’t take away from how much of a fun experience Persona Q2 is for both series newcomers through Persona 5 or fans who have stuck around since Persona 3 and 4’s heyday. 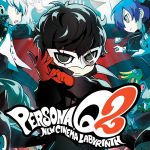 Despite the lack of an English dub and some enduring design flaws, Persona Q2: New Cinema Labyrinth is a wonderful experience for Persona newcomers and long-time fans with a new, refreshing experience that sends off the Nintendo 3DS wonderfully. 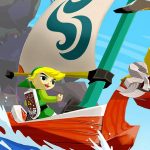 Games We Want on Nintendo Switch 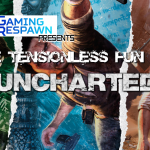 The Tensionless Fun of Uncharted