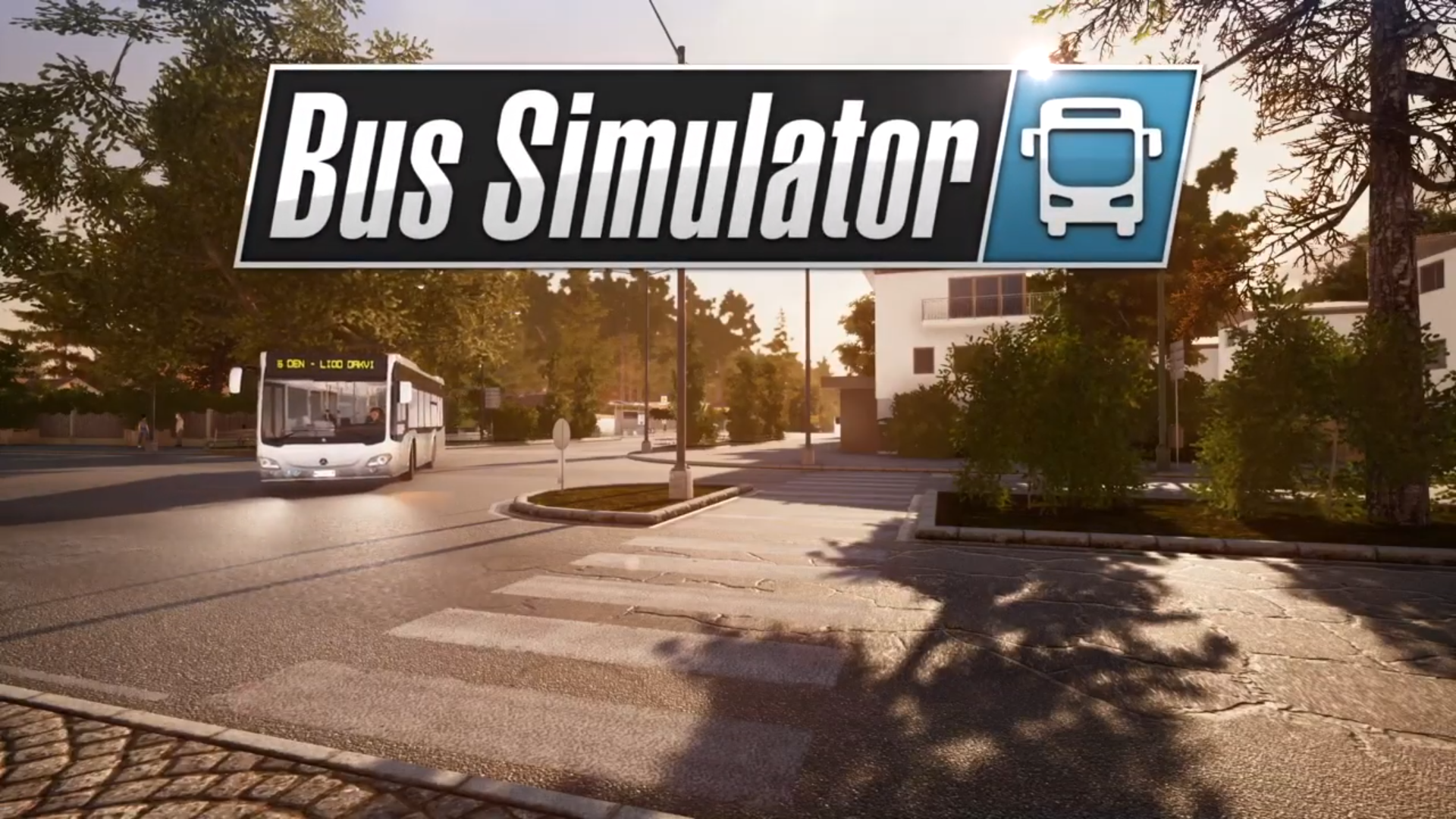 Bus Simulator has taken over my life. This is a statement I thought I would never hear myself say (well, type). I’ve seen the previous versions of Bus Simulator on Steam for years now, but I never once thought, “You know what would be fun? Pretending to drive a bus.” Even when I loaded it up for the first time, I gave myself five minutes before I figured I’d get fed up at driving like a normal person, and I’d be GTA-ing my way around the fictional city of Seaside Valley. Alas, that was not the case at all. I found myself becoming obsessed with following the rules of the road, and if I succumbed to a penalty (more on them later), I would feel absolutely gutted. 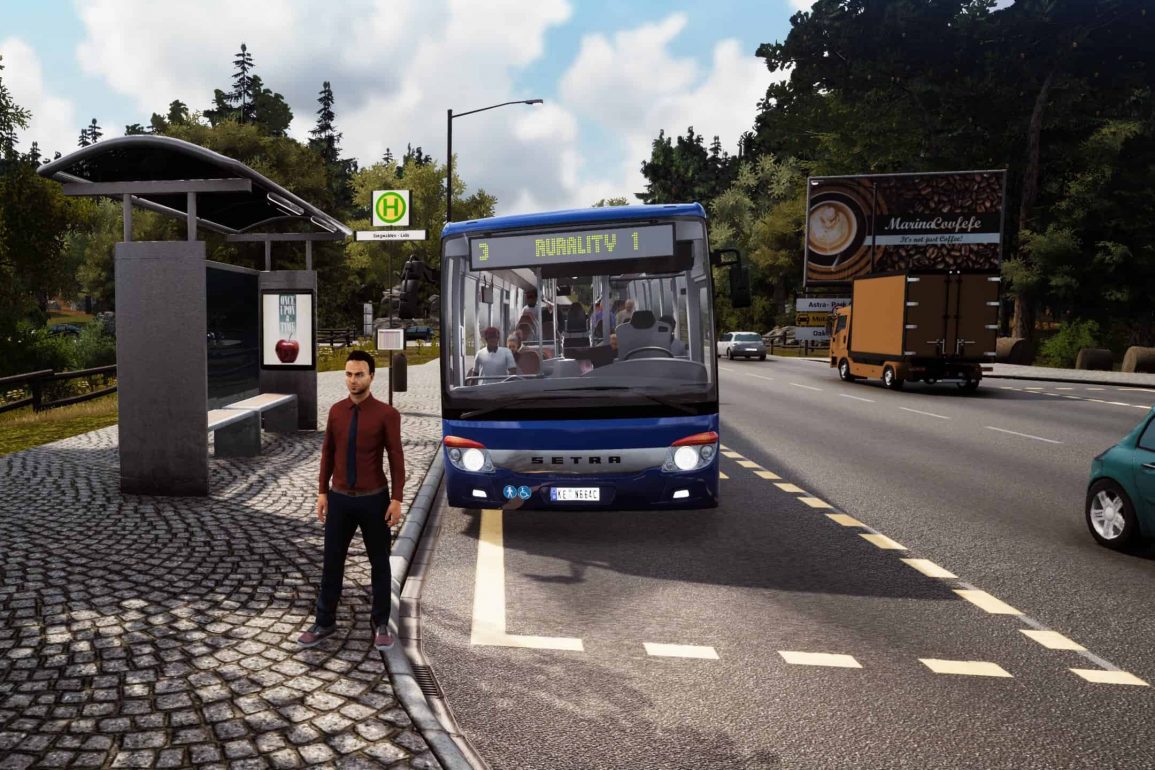 So, let’s get down to it. In Bus Simulator, you operate your own bus company by setting routes, buying buses, hiring drivers and doing a load of driving yourself. It is a game that could be quite overwhelming, but the excellent tutorial at the start will show you exactly how to operate your bus while also teaching you that the roads ahead of you are not in San Andreas. After creating your bus company and choosing what your fleet of drivers will be wearing, you’ll be given your first bus and set half a dozen or so objectives. This is how the career mode in Bus Simulator works, and it does work rather well.

The objectives will range from creating new routes to driving a particular style of bus on a specific route. The great thing about these objectives is that they are optional. Now, obviously, not doing them will mean you cannot progress through the game, but there will be times where you will have to abandon the objectives as you may either be short on money to buy something or not at the right level. When this happens, just pick one of your routes or create a new one, jump behind the wheel and go drive the citizens of Seaside Valley to where they need to go. 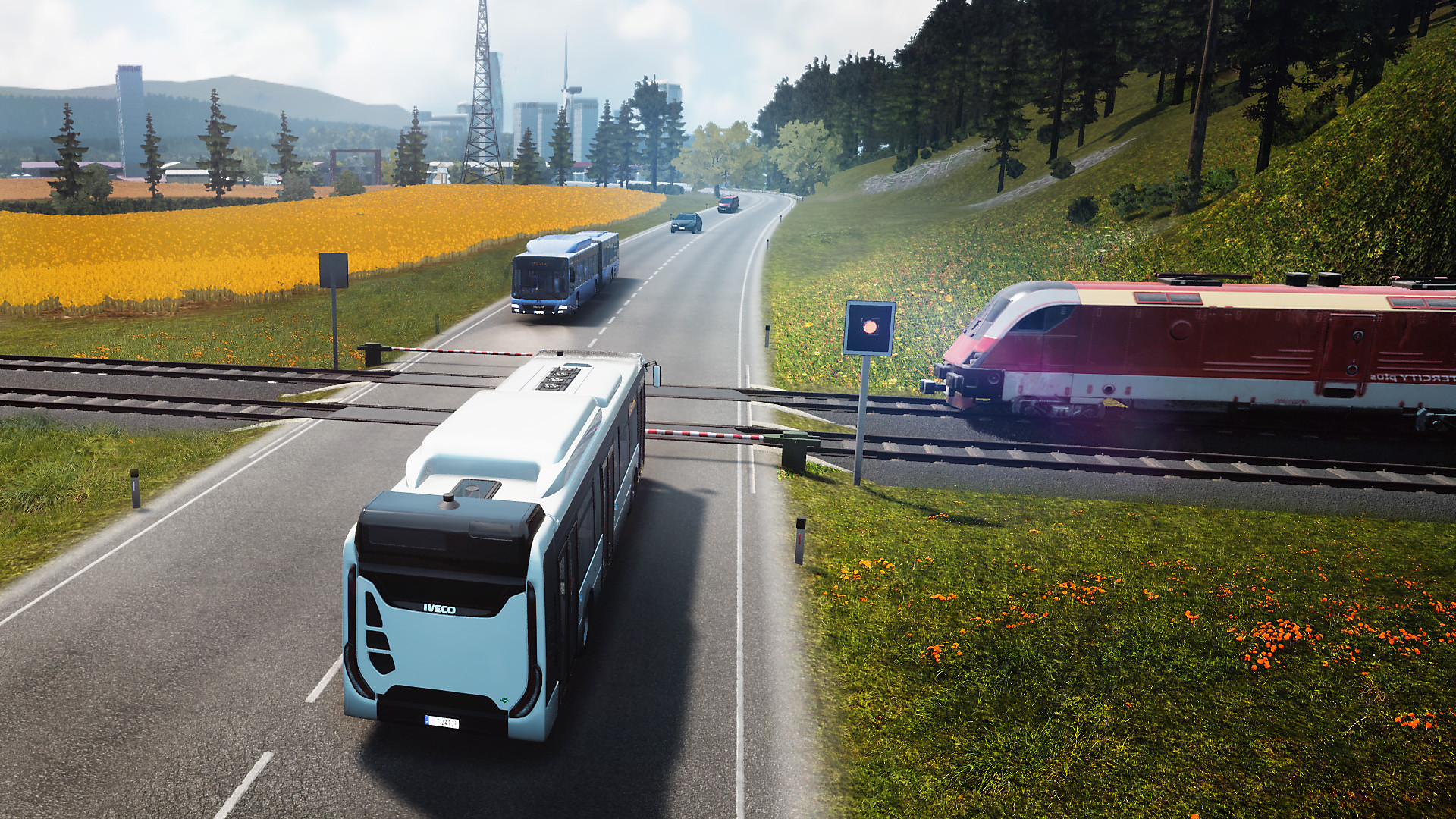 All of this would be rather rubbish if the actual driving wasn’t that great, right? Well, thankfully, that isn’t the case, and aside from a few minor issues (not so much with the bus itself), the driving experience is a pleasurable one. You can choose from either a simple or realistic start for when you load up a route. The only difference is that, with the realistic start, you’ll have to unlock the second set of doors yourself and press a few more buttons to get the bus started, but once you’ve done this half a dozen times, then it will just become second nature. Once you have the bus started and you’re out on the road, this is where you will be spending 95% of your time. It is hard to explain why it is so fun, driving normally and just, well, driving a bus. Bus Simulator does a great job at rewarding you for driving like a normal human with a delightful chime every time you do something right, like signalling while turning. On the flip side, you will also find yourself getting a lot of penalties. These can either be in the form of a fine or just a negative customer experience, like complaining that you were braking too hard. 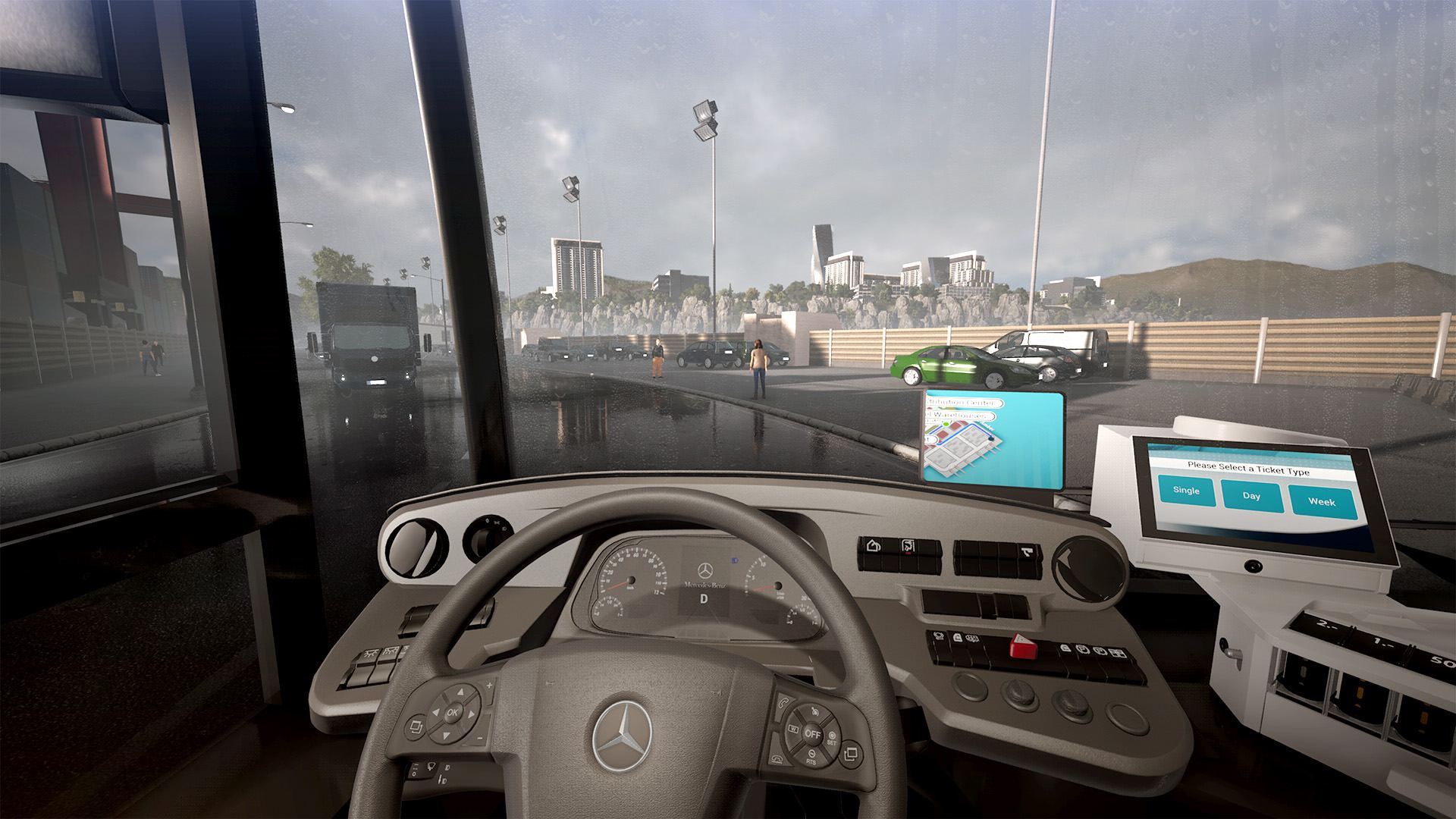 Most of the time, you deserve these penalties. On some occasions, you will feel hard done by, and with good reason. One rule you will find you constantly break time and time again in the early part of your career as a bus driver is clipping or driving onto the curb. You’ll either take a corner too quickly or move the analogue stick just that tad too much, and you’ll receive the penalty. What is incredibly frustrating, however, is what you do not get punished for. So, I was gunning it down a country road, keeping to the speed limit, of course, when I saw a rather large traffic jam forming. I was right near the end of my route, and I didn’t particularly fancy waiting in this ever-increasing queue, so I decided that a penalty for driving on the wrong side of the road is the better of the two evils, except that when I did take that option, there was no penalty. At first, I was rather chuffed with myself, but then I found myself questioning the numerous times I had been penalised for slightly clipping the curb. There is also the issue that if an oncoming vehicle crashes into you, it’s your fault. Most of the time when you wait to turn into a road, the traffic will give you right of way, but if you try and cut in front of someone, there is no attempt by them to brake whatsoever. But 90% of the time, the AI does a pretty decent job in controlling the other vehicles on the road, and there is also quite a lot of them. This is something you can change in the settings, but it is highly advisable to leave the setting on high just to make it that more realistic. The issue with having so many cars on the road is the frame rate can stutter due to the amount of traffic.

Seaside Valley is a pleasant setting to drive your bus around in. The map offers a good variety of some long, winding country roads and short, congested inner-city blocks. The inhabitants too are a friendly bunch, you won’t have to deal with any troublesome teenagers throwing McDonald’s drinks at your bus, just having to tell the occasional person to turn their music down or pick up the odd coffee cup that gets left behind. The citizens will also talk amongst themselves as you ferry them all over town, the issue being that there was only a handful of conversations recorded, so it can be rather tedious hearing the exact same conversation again and again. Another small but tedious issue is the fact if you turn your head to look out of your driver’s window or look to a passenger coming on, there is no shortcut to return your head to the centre. It’s a small but annoying issue that hopefully could be rectified in a patch. 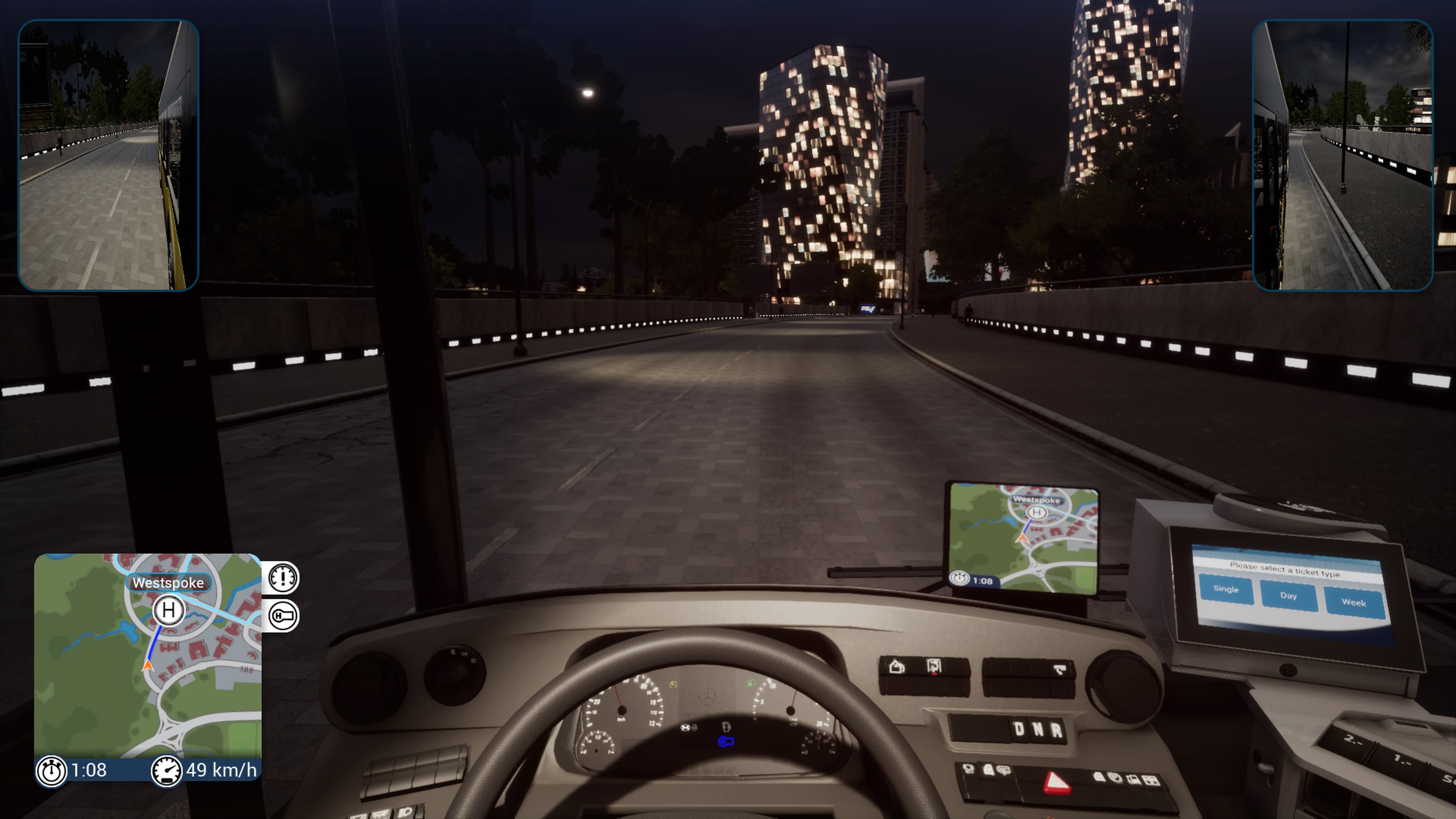 Out of the normal career mode, there is a sandbox mode, which is pretty easy to guess what type of mode it is. You unlock this quite early on in the game, so if you just want to buy buses and plot routes without the financial worries and objectives of the main game, then that can also be a lot of fun.

I never thought these words would ever leave my mouth (fingers), but the console version of Bus Simulator has been so fun. Never would I have thought that pretending to be a bus driver would bring me so much joy. Sure, there are a few issues here, but overall, Bus Simulator is a great ride for lovers and haters of buses alike. 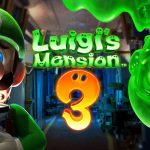