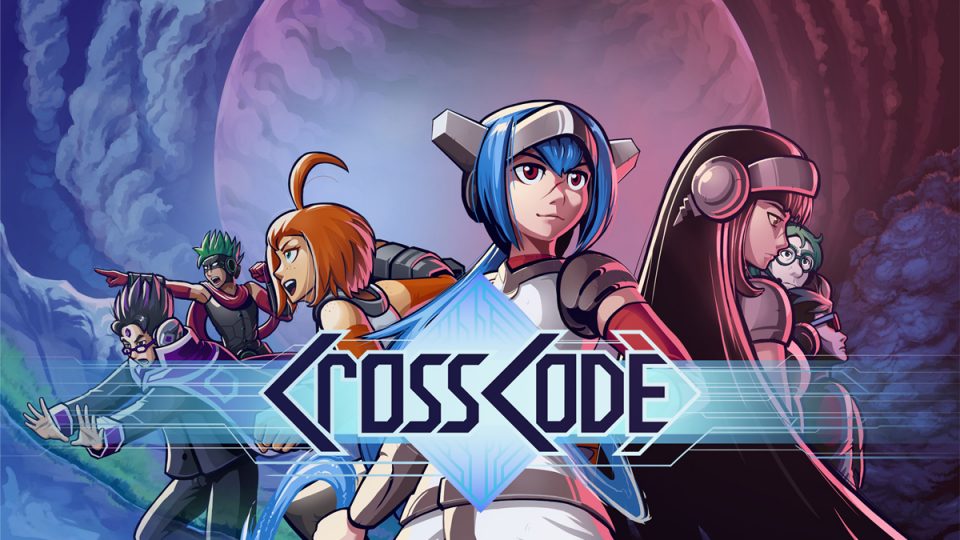 Back in 2015 I stumbled on CrossCode on Steam, and I was instantly hooked on it. I had found a little MMO action-RPG gem that I wanted to play – eventually- after I had finished one or two games I was currently playing at the time. It was put on the backlog, but now I’m glad it’s released on consoles. CrossCode has made its way to the Nintendo Switch, PlayStation 4, and Xbox One (as well as Linux and Mac OX), and I’m glad I can finally get to this game again. Developed by Radical Fish Games and published by Deck13, CrossCode can be played anywhere you are on the Nintendo Switch, but be warned that this is a beefy game and a massive adventure that can last you 30-80+ hours, especially if you end up wanting to fully complete it. 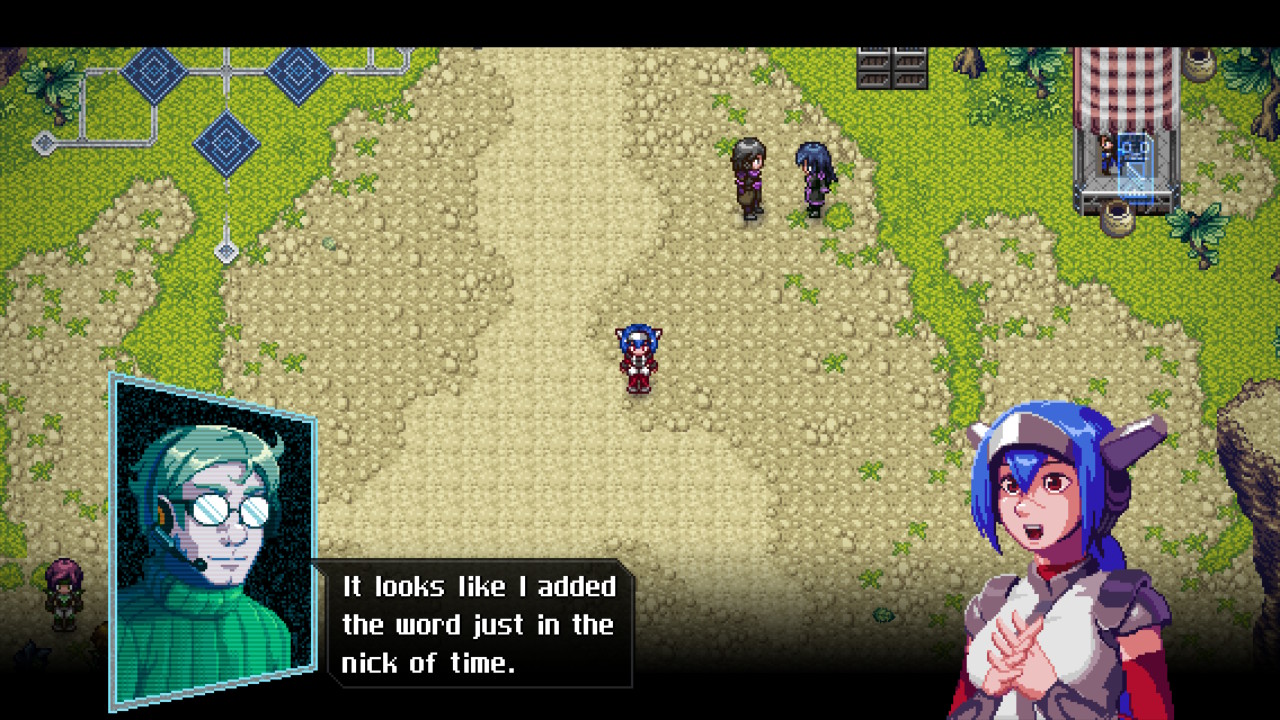 The story revolves around our protagonist, Lea, an AI who has awoken in the game world in which CrossCode takes place, but she doesn’t remember anything and has amnesia. Plus, on top of that, she is mute since there is a problem with her speech coding. But she slowly talks as she gets a new word added to her coding every now and then throughout the story. Discover the vast world with Lea as the player explores massive areas and large dungeons. You will encounter all sorts of other characters- from shopkeepers to quest-givers and other NPCs. Help Lea become a better avatar and master all 4 elements: Cold, Heat, Shock and Wave while she tries to remember who she is, making new friends along the way. The story is about the distant future of gaming as you solve puzzles along the way, especially in dungeons. The world was once inhabited by intelligent lifeforms that were referred to as the Ancients, and while the Ancients no longer exist, they left behind a technological heritage to behold: The Track of the Ancients. Players in the game like Lea are called Seekers, and they help discover the secrets of the Ancients while mastering the elements.

The dungeons will have status requirements. Before Lea goes into one, she will be reminded of what her stats should be, and the player can choose to proceed or not. I say that as long as your status is around the said number you should be okay. Plus, by the time you make it to the mid-boss that you gain the elements from, you will gain a number of levels and will be fine for the rest of the dungeon. 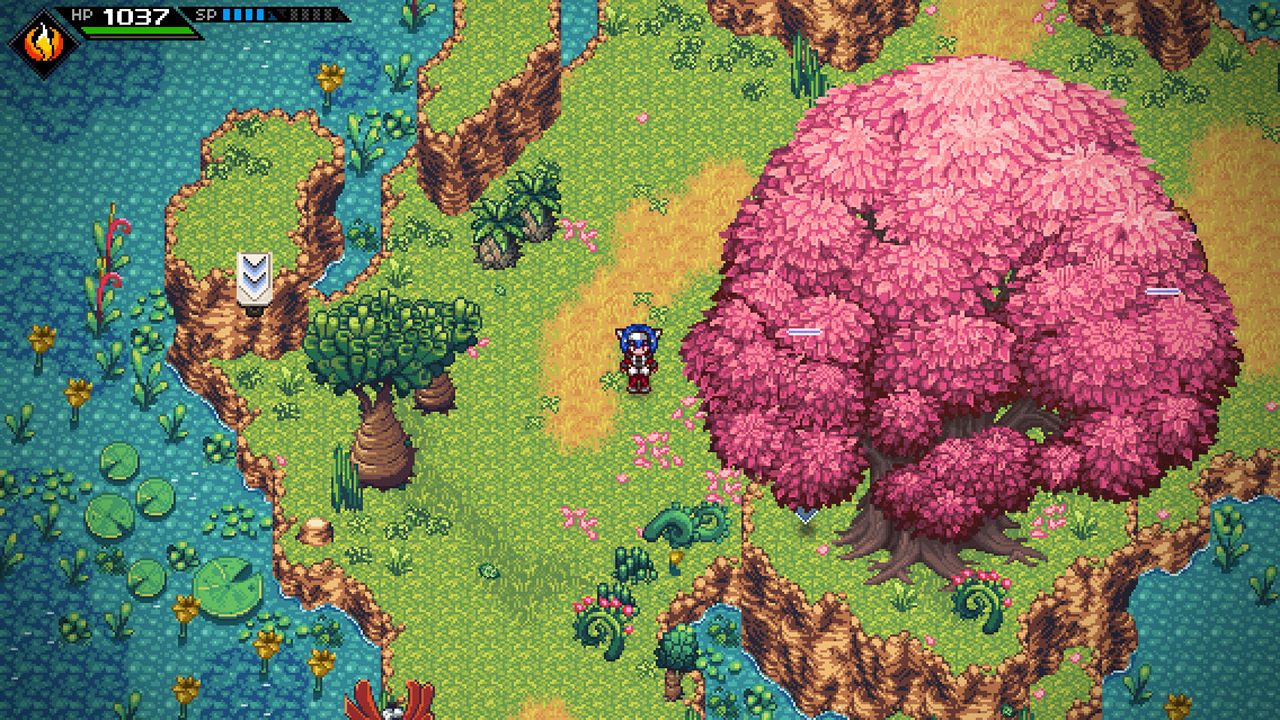 CrossCode is a 30-80+ hour game packed with lots of extra missions to do – and let me tell you, there is no shortage of side quests. CrossCode has lots of side quests that really bump up the amount of time you can spend with it. The player can search for items and defeat a certain number of enemies. By completing the side quests, you are rewarded with experience points, items, money or even gear. These side quests help make leveling Lea up easier and faster compared to just going out and grinding. 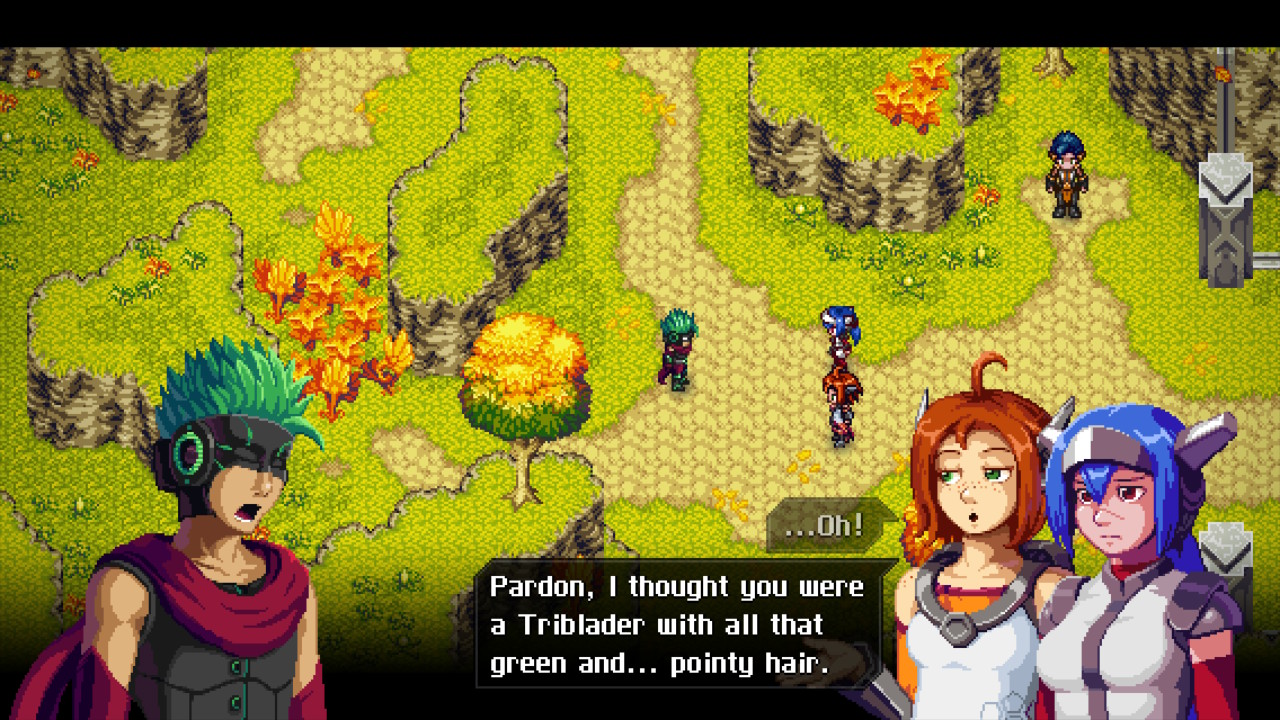 The controls in CrossCode are easy to pick up: You move Lea with the left analog stick, the right is to aim, the R trigger is to fire projectiles, Y is to use melee attacks, L is to dash out of the way of enemy attacks, and if you hold L, you can bring up a shield that lets you take less damage from attacks, LZ brings up a quick menu where you can use healing items you pick up along your journey. The + button brings up an options menu where you can change options, change sound options, resume gameplay, save, and even change other settings, like how much damage you receive from enemies, how often they appear and also how easy puzzles will be to solve. Lea has an MP meter, and once it’s filled by attacking enemies, you can unleash a special attack using the RZ trigger that deals a lot of damage and could wipe out all enemies on-screen.The – (minus) button brings up the main menu where you can check quests, check inventory, see records, and change Lea’s equipment. Accessing the circuit menu lets you use CP (Circuit Points) to make Lea more powerful and unlock different abilities as well. Don’t worry though, in the beginning of the game, there are tutorials showing you what buttons do what, so you’ll be able to master Lea and her abilities in no time. 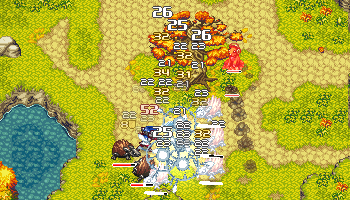 The one thing I don’t like about the controls is that some enemies and mobs require you to defeat them using the projectiles. Lea uses projectiles by using the right analog stick to aim and the R trigger to fire them. When using Joyc-Cons or the Switch Lite controls, I found my hand started to cramp up and kind of locked up. It made me lose some boss fights, and I had to try a number of times for a few days’ span just to make sure my hands didn’t cramp up. But after hours of trying, I finally defeated the boss and managed to advance through the game and storyline. I’m glad that there are two modes when you first start the game; you’ll be able to choose between a normal mode, which is the mode that the game suggests you play to provide yourself with a so-called challenge, and an easy mode for those who want to just enjoy the storyline. I chose normal mode at first, but I learned and saw that you can change a few options to make the game easier without actually switching to easy mode. 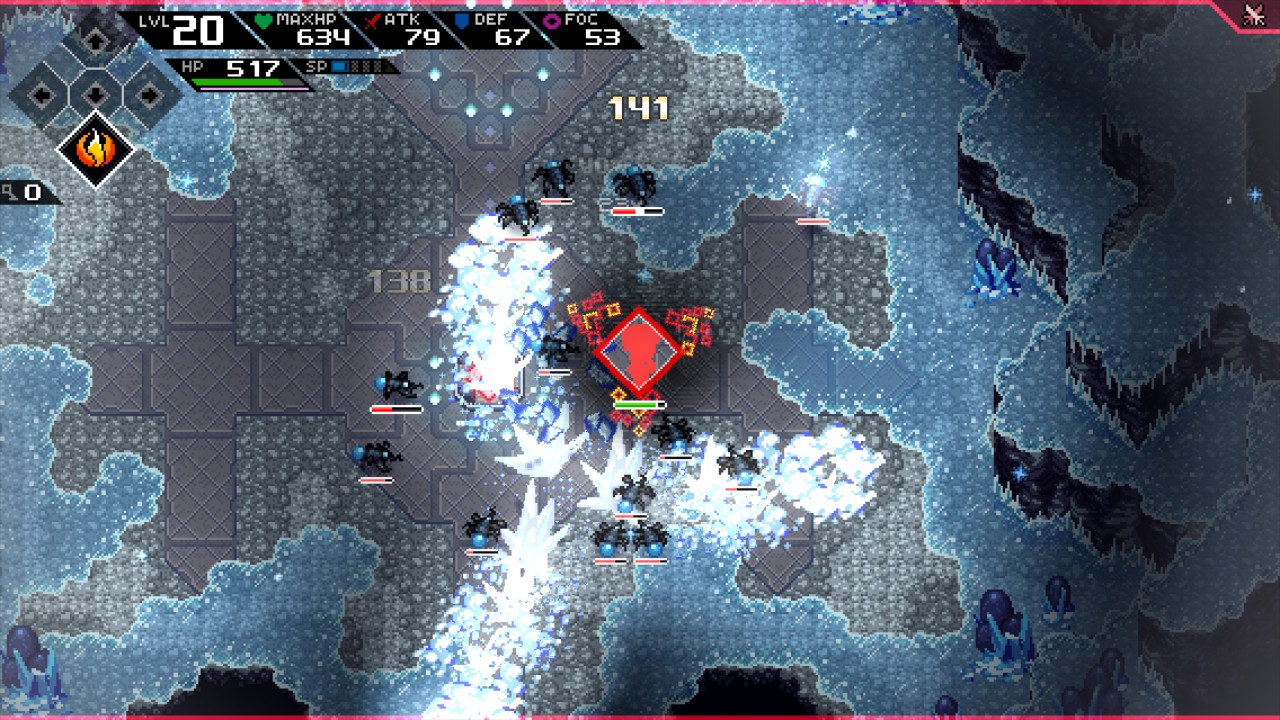 The game does have a lot going for it with its story, graphics, and soundtrack. The story is captivating and draws the player in, making them want to play more and more. I for one always said I had to finish one more quest and finish one more dungeon before I went to sleep. The graphics have that great 2D action-RPG style that I love, making the game look so beautiful and vibrant. It reminds me of Chrono Trigger, Golden Sun and Zelda but on the next level of sharpness – like you would get in remasters. I simply fell in love with the amazing soundtrack composed by Deniz Akbulut. The last soundtrack I loved this much was the one for the recent Final Fantasy VII remake. This soundtrack has 64 fantastic songs, each for different areas and places in the game, making every area feel different and unique. 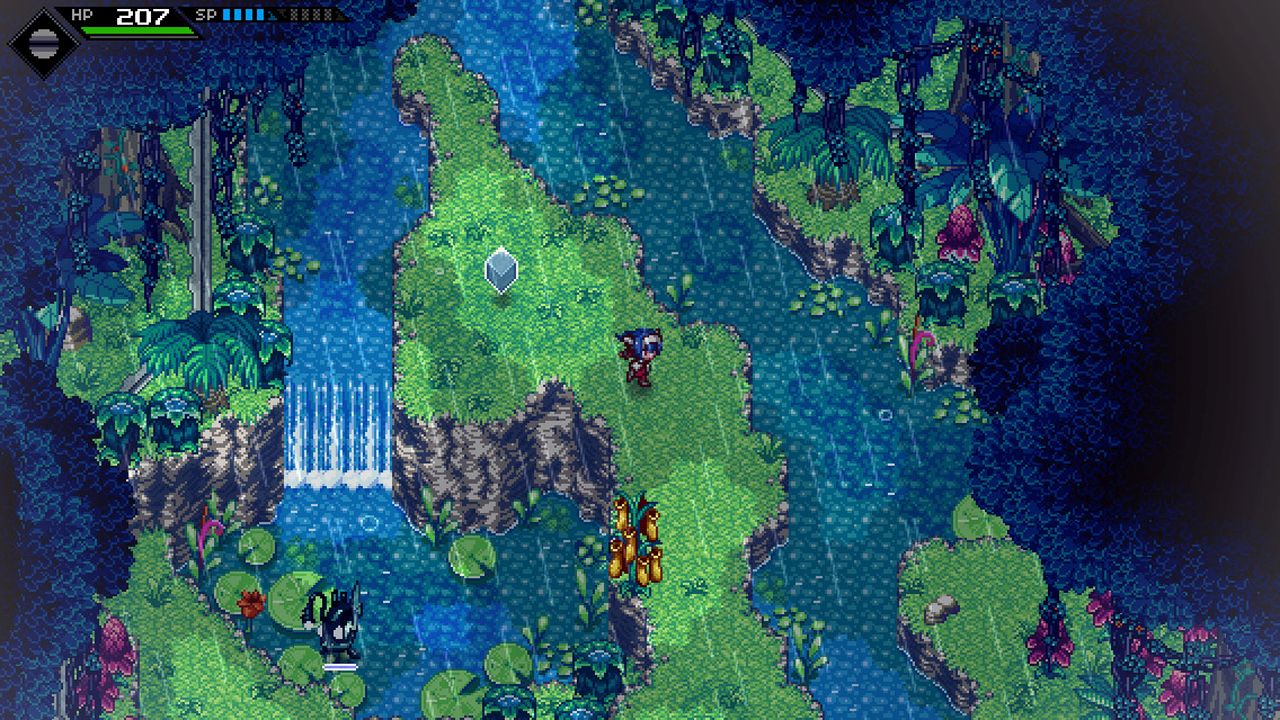 I’m glad that I finally managed to come back to this little RPG gem of a game. Years ago when I first played CrossCode, I would have never thought it would come to home consoles or even the hybrid portable home console of the Nintendo Switch, but it has. I’m glad that this fantastic RPG MMO is on almost everything, and a lot of people can enjoy this game my sinking a good month into it like I did. I loved every moment I had in this world with all the characters I met along the way. It’s an amazing and fun game through and through, checking everything off the list that makes games special, namely a great story, amazing soundtrack and beautiful graphics. I would recommend CrossCode to all my gaming friends who are looking for something to play. 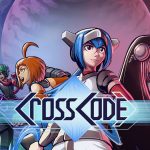 Gaming Respawn’s copy of CrossCode was provided by the publisher. 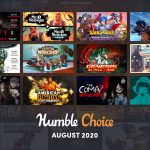 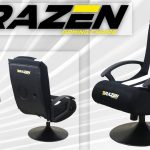