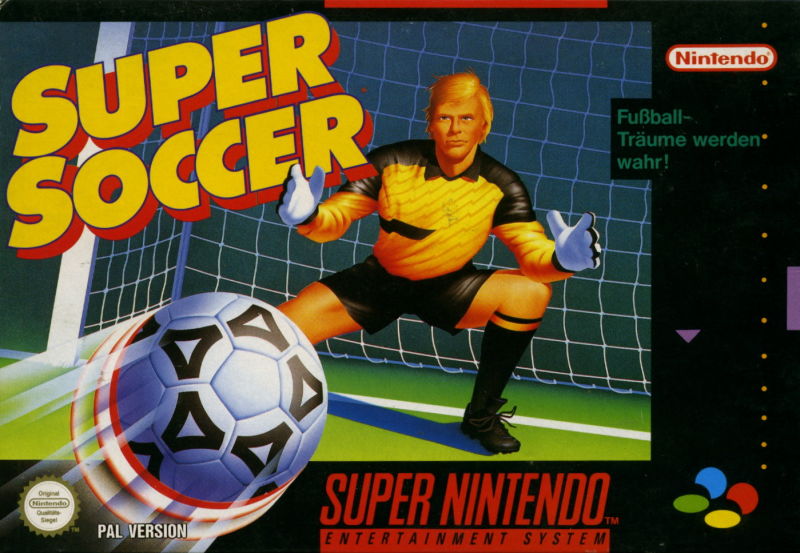 There are some games that enjoy massive popularity and I just can’t fathom why. For that reason, I’ve been kind of dreading doing a feature on this one for a while. I have never had the warm nostalgic memory of this game that so many others seem to. My opinion of it really hasn’t changed that much over the course of two decades that have passed since I first played it. However, I know it’s a game that’s both revered and cherished by a large group of Nintendo enthusiasts, and I’ve always been a bit wary of pissing them off. But, one thing I pride myself on when it comes to Retro Features, or indeed anything that I write, is that I’m always honest with my audience, regardless of whether that will get me into hot water with them or not.

So, with that being said, I await your hate when I state that I really think Super Soccer is vastly overrated and a pretty bad football game.

While you light the torches and pick out your best pitchfork, I’ll talk about the things I actually like about this game.

The music and sound effects are excellent. Every team has their own theme tune that plays in the background during their match, and all of them are catchy and fun to listen to. I quite like the graphics, although for some reason every goalkeeper ends up looking like late 80’s era Dave Beasant, and the game is overall bright and colourful to look at. There are a number of formations to choose from, including the 3-2-2-3 (Also known as the “WM”) which I don’t think has been used since the 1950’s, but it’s still nice to see it as an option.

The controls are decent enough, with Y acting as a homing pass, A acting as low pass/shot, and B acting as high pass/shot. There is a marker above one of your team mates that designates who the homing pass will go to. You can alternate this by pressing the shoulder buttons. When you don’t have the ball, you have the option to perform a slide tackle by pressing A/B and a shoulder charge by pressing Y.

There are a decent selection of teams, with most of the heavy hitters from the early 90’s represented, and the lack of license is overcome by giving the fake players names that don’t take away from the experience (England having a player called “Bert” just cracks me up for some reason. When he’s not playing high level international football, he’s working at a pie shop in Widnes). 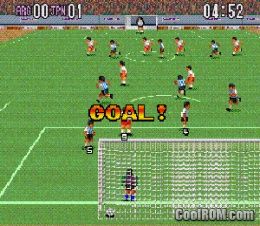 The game has a frenetic pace and can provide some high energy thrills when played with a friend. You’ll sink a good few hours into the multiplayer if you have mates to share it with. The single player experience isn’t as substantial, with only exhibition and tournament options, but it still provides fast paced action and enjoyment.

The camera is set up with a vertical view of the pitch similar to Sensible Soccer, but unlike “Sensi”, the camera is quite low down which makes visibility an issue. If you’re playing towards the southernly goal, you basically cannot see what’s in front of you. This essentially makes the homing pass all but useless as the camera will always show more of the upper half of the pitch than the bottom, so the homing pass marker will usually be on a player closer to your goal than the opposition. This always gives the player who plays up the pitch an advantage and really unbalances the game.

In addition to the camera, there is also a massive, almost game breaking, flaw when it comes to defending and tackling.

There is seemingly no difference between what constitutes a foul and what doesn’t, and there is even less to distinguish between what is a booking and a straight red. This essentially turns defending into nothing more than a lottery, with it being left purely to the game’s whim as to whether you end the match with all 11 players or not.

A shoulder barge from behind can sometimes be just fine and receive no action whatever, but in other occasions it can bring an immediate red card. Sorry, but this is not the calling card of a good football game. It can still be part of an exciting game, which Super Soccer most assuredly is, but it kills any serious attempt at making it a decent football game. In Sensible Soccer, it was much clearer as to what constituted a foul and what didn’t. This is also the case in a game like ISS Deluxe, which also provides two different forms of tackling which are actually different from one another.

In Super Soccer, both the shoulder charge and the slide tackle have almost an even chance of being a foul as the other, and there’s no way to truly gage the “safe” way of performing either tackle. In ISS Deluxe it’s relatively straight forward. You know that a slide tackle from behind that doesn’t get the ball will almost always result in a foul and a possible booking, whereas sticking a foot in from the front will almost always end with a successful tackle that doesn’t draw a foul. The slide tackle is easier to pull off but it has a wider margin of error, while the single foot challenge is harder to pull off but almost never results in an error if you manage to do it correctly.

Human was known for good sporting games, Fire Pro Wrestling X Premium in particular, but not having an easily identifiable criteria for what constitutes a “good” tackle and a “bad” one is a massive failure on their part and sadly makes this a bad football game. It doesn’t stop it from occasionally being frantic fun, but it does make it an overall frustrating representation of the beautiful game. If they left in the randomness of what constitutes a foul but took away bookings entirely, like SEGA would eventually go on to do with Virtua Striker when it developed a fast paced kick about for arcade consumption, then I would be more forgiving of it.

Sadly however, my lasting memory of Super Soccer was not the fast paced thrills it can provide, but the frustration it gave me from seeing one of my players sent off for a challenge that both I and the CPU controlled opponent had already performed up to twenty times in the match already with nary a peep from the scowling referee. It is for this reason, above all else, that Super Soccer is an inferior footballing game when put up against its contemporaries.

I’d still recommend it if you could find it cheap enough. It will cost you £3.99 plus postage on Amazon, which isn’t too bad. If it ever shows up on the Virtual Console for less than a fiver, it might be worth your time if you have some mates to play it with. I wouldn’t pay more than one Bison Dollar for it though. I’d pay a little bit extra and purchase ISS Deluxe or Sensible Soccer instead.

I’ve played worse, oh my word have I played worse, but I’ve also played much better. Mildly recommended, but buy with discretion.

And with that, “Footy Month” comes to a close. I hope you’ve enjoyed it. Next week, we return to the original PlayStation, for a game you’ve likely heard of.

You can watch YouTube footage of the game, courtesy of World of Longplays, by clicking right HERE

Looking for other great content here on the site? Well why not take a goosey gander at the following?

Emiliano explores the 8 Reasons why you should try Black Desert, and you can read all about it by clicking right HERE 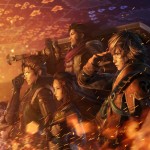 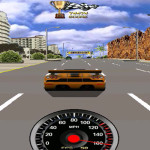