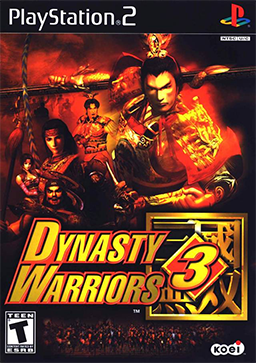 Today’s game is from the sixth generation and has its fair share of detractors, one notable big time supporter in the form of a certain James Sterling, and is certainly one of the PS2 games that I sunk the most time into back in the day.

The Dynasty Warriors series is based on the novel “Romance of the Three Kingdoms” and follows the story of three warring kingdoms (Shu, Wu, and Wei) as they battle to unify feudal China under the banner of one kingdom. The original Dynasty Warriors on the PlayStation was a straight up 1 V 1 fighter in the vein of Soul Blade and had moderate success, but little more. Taking inspiration from Chief Brody, developers Omega Force decided they were going to need a bigger boat and started the gradual evolution of the series into the wild hack and slashathon we know it as today.

In Dynasty Warriors 2, you no longer just took on one opponent, you took on an entire army! I’ve played this one a little bit and you can see it had potential to be something, but it fell just short of achieving it. The gameplay is a little sluggish and it lacks a two player option. Dynasty Warriors 3 would tighten the gameplay up, introduce more characters, and also bring a multiplayer option to the table. I was about to spend a lot of time fighting huge battles in far off China! 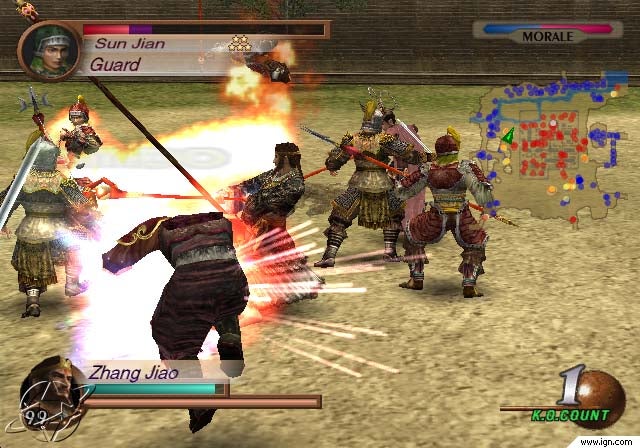 Despite what its fans may argue, the gameplay in Dynasty Warriors 3 is hardly complex or particularly nuanced. You have your basic attack button in square, a jump button in X, triangle is your heavy attack, L1 is block and circle allows you to unleash a powerful “Musou” attack that takes time to charge up but usually devastates all who happen to end up on the wrong side of it. So it’s hardly over complicated, but it all works very well and is pretty intuitive after a couple of playthroughs. My sister is hardly a regular player of video games and normally gives them a wide berth, but she gave DW3 a go back when I first started playing it, and she really got into it. There’s no denying that the game has an immense “pick up and play” factor and is very welcoming to new players.

By pressing square continuously you can chain together combos and you can even throw a heavy attack in there to mix things up. All characters start out with a basic weapon that allows a maximum combo of four strikes, but as you progress in the game and win more battles you can unlock new weaponry until you eventually unlock a weapon that lets you string together a six attack combo. On top of that, with a combination of light attacks, heavy attacks, juggling enemies in the air, and your Musou move you can have some combos going into double figures.

The game starts out with nine playable characters but you can unlock almost triple that paltry number by completing the game’s story mode with the three different Kingdoms, as well as unlocking some characters by besting them in battle. There is a mixture of fighting styles from big heavy hitters like Xu Zhu, to speedy smaller fighters like Lu Xun, all the way to all-rounder’s like Zhao Yun. Chances are that there’s at least one character in the game you’ll enjoy playing as (my personal favourite is one eyed sword swinger Xiahou Dun), and in most cases each Kingdom will have at least one you’ll be tempted to complete the story mode with. 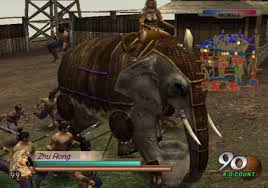 On the whole, I’ve always found the game to be exceedingly playable, although there is one part of it that frustrates me beyond measure and that is the enemy archers who are scattered around the battlefields. They are basically nothing more than leaches that slowly drain your precious health bar when you’re in the middle of battle. It’s hard enough to take on a small army of foot soldiers and their huge weapon wielding general, without also having to contend with getting arrows stuck up your ancient Chinese backside to boot! On more than one occasion I howled in misery as a stray arrow killed my character just as I was about to pick up a health pack (which come in the form of sweet buns, in keeping with the Chinese theme to everything). As you advance in story mode, the enemy soldiers become more powerful and harder to kill, thus meaning a line of grinning archers or cross bowers is the LAST thing you want to see when you have just under half a health bar left and six enemy generals you still need to kill.

There are strategy elements to the game, as you can decide in what order to tackle the opposing generals and occasionally the enemy will spring traps and ambushes on you. It’s certainly more about the action than the strategy, but how you tackle a stage does tend to have slightly different results on the eventual outcome.

As I mentioned earlier, the Dynasty Warriors series has its fair share of detractors, who complain about the repetitive gameplay and overall silliness of the game. I can see where they are coming from, but ultimately I think it comes down to personal preference. I find the horribly delivered voice acting to be hilarious and enjoy sinking an hour or two into tackling entire armies with just a halberd and a moustache to protect my person. I know the game is hardly Virtua Fighter 4, but it’s hardly as simplistic as its detractors like to make out either. There truly is more to this game than repeatedly pressing the square button until the scary men go away. I’d never go higher than a 70-75 for any of the games in the series, but I can’t deny that they aren’t fun. I can see both sides of the argument and all I’ll say is that I’d give the game a go before picking where you stand. You might love it, you might hate it, or you might enjoy it for a few hours then move on with your life. Some of the mass hysteria that surrounds the series sometimes just confuses me, as it’s at worst a repetitive fighter that you may tire of after playing it for a while. It’s hardly the blight on the games industry that some let on.

I can see why some people are quick to turn their nose up at the Dynasty Warriors series, and I haven’t bought a game in the series myself for quite a while, but there’s no denying that I had a lot of fun going back and playing DW3 for this feature. The game is anarchic, high octane, silly fun and I think this style of game certainly has its place. I recall playing the two player mode with countless friends and really enjoying it. It’s wacky and it’s certainly not for everyone, but I would heartily recommend this game if you’re into mass beat-em-ups, or the idea of such a game sounds like something you’d like. You can buy DW3 for a mere pittance now and it’s well worth the money.

We have a ten year cut off here at Gaming Respawn when it comes to what we class as “retro”. It may seem arbitrary to some, but we feel it’s a good barometer. It’s far back enough to be nostalgic about something while still recent enough that it settles on our collective consciousness.

You can view footage of the game, courtesy of DarkNinja9119, by clicking right HERE

Looking for other great content hear on the site? Well why not take a goosey gander at the following?

Luke takes a look at PETA’s least favourite game in the first issue of “The Theory Files”, and you can read all about it by clicking right HERE 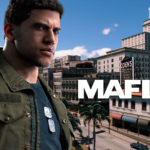 Mafia 3 will release on October 7 for PS4, Xbox One and PC