The third day of DreamHack just concluded in Cluj-Napoca and what a day it was. If yesterday I was telling you that Luminosity beating Fnatic was the upset of the tournament, today was the day of the upsets. Without any other further ado let’s get into the recap of today’s matches.

First up, it’s EnVyUs vs Fnatic. The first upset of the day is admittedly a small one. EnVyUs beating Fnatic is not something too far-fetched, but that’s not to say we can’t give credit to EnVyUs (or take away credit from Fnatic?) for knocking the three-time major champions out of the competition in the quarterfinals. After losing the first match on their own map 16-9, and then beating Fnatic on their map 16-9, EnVyUs manage to take a crushing 16-2 away from the Swedish team on the randomly selected third map, securing the best of 3 and their place in the semifinals. EnVyUs 2 – 1 Fnatic

Next in today’s list of incredible results was the game between Virtus.pro and Gamers2. Even from the map pick phase, everyone was sure that VP would easily win this matchup, considering G2 did not ban Train, VP’s #1 map of choice. The first map was Cache, picked by G2, the second one was obviously Train, picked by VP and then the last random one was Mirage. G2 managed to win the first match with relative ease, especially in the second half, taking away a 16-10. What came next is even more impressive, as they managed to tie up with VP at 15-15 on VP’s home turf in the second match. The game was sent to overtime and Gamers2 snatched the victory with the score of 19-17, sending one of the top 3 CS:GO teams in the world home early. Virtus.pro 0 – 2 Gamers2

The third game of the day was one that made the analyst desk eat their heart out. We’re talking about Team SoloMid vs Ninjas in Pyjamas. Despite NiP being arguably the fan-favourites here in Cluj-Napoca, the analyst desk was predicting a win from TSM, Duncan “Thorin” Shields going as far as saying that TSM would win with a decisive 2 – 0, which wouldn’t have been too surprising considering NiP’s less than stellar performance leading up to this major tournament. NiP has shown however that they are still in this tournament to win it, taking two solid consecutive matches with the scores of 16-10 and 16-8 respectively. I have to say, I think I saw a few grains of salt on the analysts’ desk after this game, much to the fans’ delight. Team SoloMid 0 – 2 Ninjas in Pyjamas

The last game of the day was the one that didn’t follow what seemed to be the pattern of the quarterfinals, between Luminosity Gaming and Natus Vincere. However, even though Na’Vi managed to uphold their status as one of the best teams in the world, it wasn’t without Luminosity putting up a fight. Na’Vi managed to win the first two matches with a close 16-14 and 16-13, after quite a bit of going back and forward with the score. Nonetheless Na’vi secure the last place in the semifinals and the day concludes. Luminosity Gaming 0 – 2 Natus Vincere

That was it for the 3rd day at DreamHack Cluj-Napoca. Brackets for the semifinals will be looking like this:

Stay tuned for the recap of the last day at DreamHack Cluj-Napoca 2015. 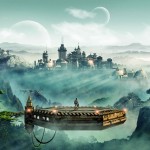 Well, That Just Happened #2 – Growing a Civilization: Beyond Earth