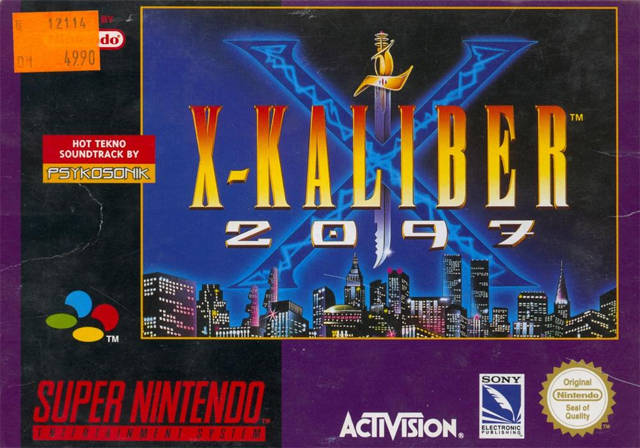 Sometimes I take a stab in the dark with certain games, pun not intended, and I end up with a pleasant surprise. This is very much one of those occasions. I knew nothing about X-Kaliber 2097 before I played it and had literally no expectation as to what it would be like. I am very grateful that I stumbled upon it.

This is a game dripping with Anime influence and it proudly wears it on its sleeve for all to see. Set in “Neo” New York (Why does every dystopian city have Neo at the front of it by the way? You’d think that as soon as the city designer came up with that name the local government would be all “Err, that’s a bit dystopian Sci-Fi actually, can we just call it Newer York instead?”) You play as the character Slash, a trench coat wearing bloke with spiky hair and a ruddy big sword. Your mission is to take down the evil gangster Raptor and his eclectic army of robotic “morphs”, along with a few other swordsmen and wacky mutated creatures, by cleaving things in twine with your massive hunk of metal whilst also negotiating fiendish platforming sections.

I love me some Anime style sword play with the best of them, and I can’t deny that playing as a Trunks look alike and slicing away at a slew of interesting villains is a lot of fun, but I never really got a sense from the game that I was actually in New York. The game has such an Eastern feel that I found it jarring that this was all supposed to be happening in the USA. It’s of course possible that the USA of 2097 has in fact become more “easternised” in the X-Kaliber universe, but that is never really explored. It would be interesting see an explanation as to how eastern culture has influenced the dystopian world in which Slash inhabits, but then again this is a 16 Bit blade-em-up, so I can understand how the game expects us to take certain things as read.

This aside, the stages are well designed and the crummy city landscapes make for great set pieces. You battle along rooftops, tangle with goons in elevators and even partake in sword fightery down in the sewers as you continue your quest to the climatic battle with Raptor. I actually really liked the games graphics and music very much. The music is crunchy and sets the mood for the ensuing fights very well and different tracks mesh with their chosen levels nicely. The game isn’t exactly colourful, favouring grim and faded aesthetics over brighter and richer ones, but it all contributes to the atmosphere of a city under siege. It’s so deliciously loony that the fate of an entire city is all down to one bloke with a blade, and the game looks as you’d expect. One boss battle even takes place in a rundown discothèque, with disco lights glaring down on you and disco beats blearing out.

This is not to say that the game is not without its flaws. Even on the easiest difficulty it can be overly difficult at times, bordering on “cheap” rather than legitimate. Some of the platforming sections led me to vicious anger, as low roof tops, tight spaces and flying enemies make certain jumps excruciatingly complicated. It doesn’t help that each level has a strict time limit, meaning the game gleefully punishes you for missing certain jumps. I’m actually amazed that they didn’t put fall damage in, just for the craic, to go alongside the constant re-traipsing of buildings to get back to the jump you failed to make on six previous attempts. Maybe they were worried of picking up the tab for a stack of broken controllers? Despite a long fall not causing Slash any harm, there are still plenty of bottomless pits for him to stumble into. Add to that the fact that most ledges are patrolled by machine gun toting goons, there’s always a possible outcome of falling victim to a Castlevania-esque ledge plunge as a result of an enemy knocking you to your doom. 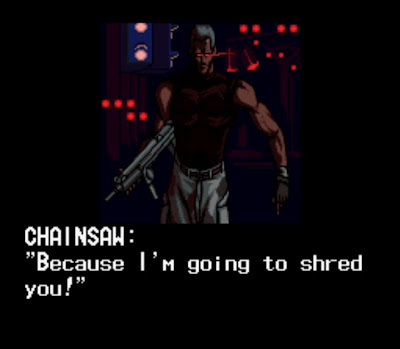 Slash is armed with three attacks, a jump and a block. Slash can block whist both standing and crouching, which becomes important depending on the enemy and situation. Some areas have automated gun turrets that fire both high and low bullets at you, which means you will have to dodge and block accordingly to come out unscathed. Along with your basic sword slash, you also have a lunging stab manoeuvre and a powerful swipe that causes a fireball to fly across the screen at your opponent. Most bosses will be able to dodge the fireball and the move itself incapacitates you for a few seconds, meaning its best left for grunts and long range attacks. Boss battles ultimately devolve to canny games of sword chess, as you block your opponent’s attacks while also finding an opening to get in a swipe of your own. Early bosses, such as the monstrous “Tattoo” (Picture Blanka from Street Fighter with an ugly rose tattoo and a whopping great piece of metal), have more basic attack patterns whereas later bosses such as the portly “Kane” (Picture Big Daddy from Chief Wiggum’s trip to New Orleans), will mix up their attacks more. As a result, the early boss battles become wars of attrition, with the clock being your biggest enemy, whereas the later boss battles become more frantic and challenging to your skills.

The early boss battles really are a game of patience. Because the timer is diligently ticking away at the top of the screen, you are motivated to win the fight as quickly as possible. However, because bosses like “Tattoo” will meticulously block your attacks the temptation is always there to go gung ho in an attempt to beat the clock. Most of the time though this will lead to the boss blocking all of your attacks and catching you with some of his own, thus wasting both precious time and life bar in the process. It’s quite a devious little wheeze from the game and adds to the difficulty, without being overly cheap. Really the platforming points are the only time I’d say the game was being unreasonably devious and that isn’t a regular occurrence. 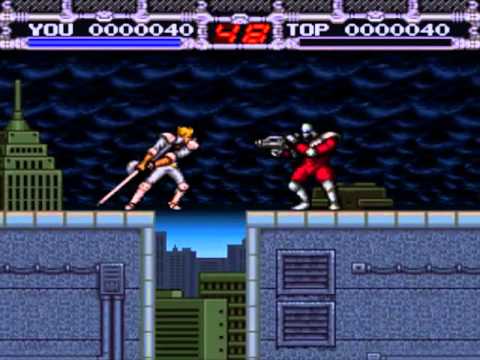 X-Kaliber 2097 is a difficult game by design, sometimes overly so, but with trial and error you can eventually get to grips with it. Rather than having a pack of enemies swarm on you straight away in the very first section of the level, like Super Empire Strikes Back does, the game instead eases you in with an opening section that lets you get to grips with everything before gradually upping the difficulty. If Star Wars had been like this, I think I would have enjoyed that game a lot more than I did. You can have a really difficult game if you want, but I truly believe you can’t start the game with the maximum difficulty. To me, difficulty is something that should grow gradually as you advance onward and X-Kaliber does a much better job of this than Super Empire.

I would certainly recommend playing this if you can find it at a reasonable price. Just the cartridge on its own will set you back about £10 on eBay, with it going all the way to £40+ if you want it fully boxed. Though I wouldn’t drop 8 Bison Dollars on it, a mere 2 of them for just the game itself isn’t bad and well worth your consideration.

Looking for other great content on the site? Why wouldn’t you? Take a goosey gander at the following! 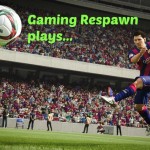 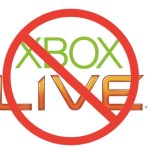