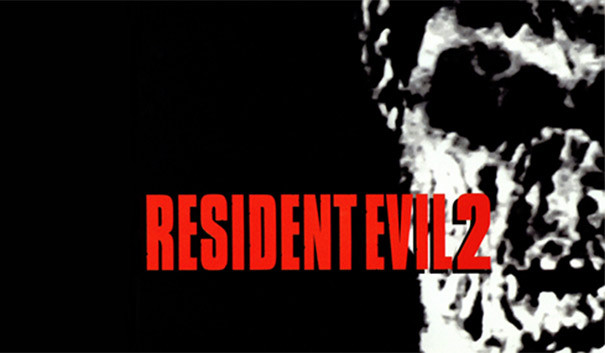 Welcome one and all, it is that time of the week again where we take a look at some of the great and not so great instalments of the biggest franchises in gaming history. We are still on the positive side of things this week on our Resident Evil series as we take a look back at arguably the most popular game in the ‘original trilogy’, if not the entire series…Resident Evil 2.

Set two months after the mansion incident, this instalment takes place inside Raccoon City, and things are just as bad as they were back in the mansion. Rookie RCPD officer Leon S. Kennedy arrives for his first shift (a day late after a bit of a heavy drinking session at a local motel). However, instead of finding a buzzing small middle American town, it looks deserted. Leon finds a body (first of many) and after inspecting it, he is startled when a group of zombies all fancy taking a bite out of our rookie police officer. Retreating to a nearby alley, Leon finds another survivor, Claire Redfield, sister to one of our heroes from the mansion incident, Chris Redfield. They both decide the safest place in town is the RCPD HQ (oh, if you only knew, guys) and both head towards there. Things, in typical Resident Evil fashion, get a bit complicated (a runaway truck being driven by a zombie crashes into the police cruiser they had acquired) and they both get separated. 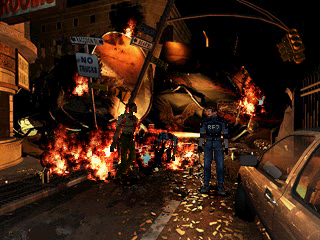 This is when the game kicks in, and what an opening sequence this is. A huge contrast to the opening sequence of the first RE where you are exploring claustrophobic corridors inside the mansion. Now, as either Leon or Claire, you are thrown into the streets of Raccoon City, with the burning truck blocking any sort of escape from the horrors in front of you. Resident Evil 1 was a bit more caring and compassionate in the first hour or so of you playing, you only encountered a handful of zombies and, depending on how efficient you were, a quick getaway from some dogs. Resident Evil 2 on the other hand is not so thoughtful, instead of a nice gentle introduction to the ongoing destruction of Raccoon City, you are met with a dozen or so zombies right in front of you. Now, yes you can run past most of them without too much of a problem, but when you first play this game, it’s full-blown panic stations. Armed with only your trusted 9mm and, of course, in true RE fashion, a limited number of bullets, if you decide to take the Schwarzenegger approach and shoot anything that moves (which I have done numerous times) you will soon be left with nothing to stop the approaching horde of the undead. This opening sequence is Resident Evil 2’s way of gently reminding you that you don’t have to shoot everything, and it’s advice that you need to adhere by if you want to finish this instalment and survive the night. 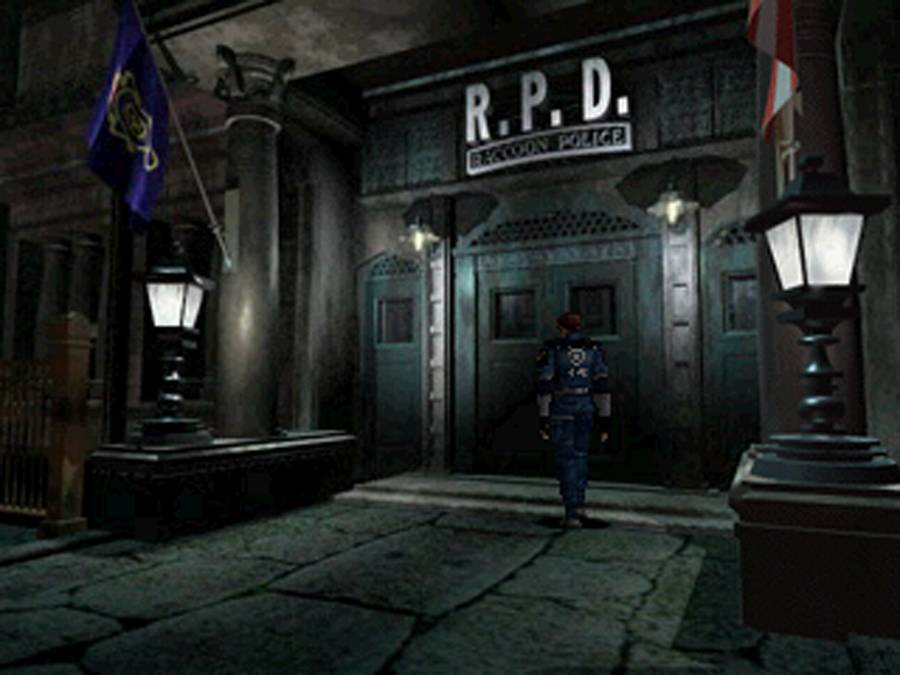 After navigating the streets of Raccoon City while shooting or dodging the undead, you arrive at what you think will be your safe haven, the HQ of the RCPD. This is when Resident Evil 2 feels more familiar. Much like the first time you enter the mansion in Resident Evil 1, this police station doesn’t feel right. For one, you are not greeted by heavily armed police officers with some milk and cookies. Instead, you enter an eerily empty reception area, and then your nightmare begins. Resident Evil 2‘s police HQ takes the same exploration and puzzle solving mechanic as its predecessor, so not much has changed in terms of the main gameplay features, but it doesn’t feel repetitive. You will search every inch of this place for numerous keys, gems, and other items you will need for your adventure/nightmare. Also, there is a plentiful amount of documents for you to discover for all those who need to find out everything they can about what is going on, and just how deep the Umbrella corruption is within Raccoon City. 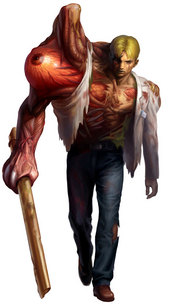 Resident Evil gave us arguably one of the greatest villains of all time in Albert Wesker, and Resident Evil 2 doesn’t disappoint either. William Birkin was Wesker’s research partner while the two of them worked for the Umbrella Corporation. A brilliant scientist, he was instrumental in the creation of the virus that was the cause of the mansion incident, and now the Raccoon City incident…the T Virus. Birkin then went on to create the more powerful G Virus, which he thought was his ticket to the higher echelons of Umbrella, however, this was not to be. After deciding to keep the G Virus for himself, Alpha Team of the Umbrella Security Service (Umbrella’s version of a special forces unit) was sent to retrieve Dr. Birkin’s life’s work. Birkin was cut down with gunfire, his research and samples stolen, and he was left for dead. However, he managed to inject himself with the G Virus, and not only did this save his life, it mutated him into one of the most iconic monsters in the series’ history. Fuelled by unquestionable rage, the now mutated Birkin chased down the members of the Security Service and killed all but one of them, Hunk. During this battle in the sewers below Raccoon City, vials of the T Virus were smashed and rats ingested this horror creation, which is how the Raccoon City incident started. 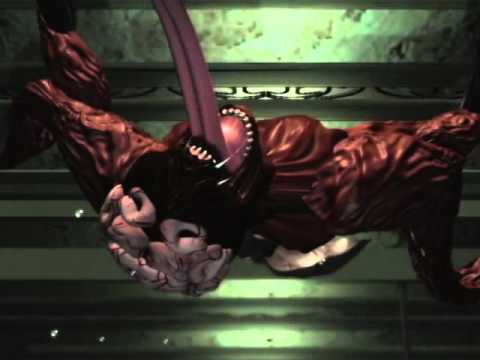 Resident Evil 2 also introduced us to a new frightening zombie mutation, the Lickers (named by officers of the RCPD). These creatures, and especially the first time you encounter one very early on in the police HQ (again, a far cry from the slow build up of horror we endured in Resident Evil), shows just how good the Resident Evil series was at scaring its players. From the noise the Licker makes as it stalks towards you, to its grotesque appearance and weird outside brain, this really is a truly horrible creature and leaves your heart racing the first time you see it. This first encounter with the Licker again is something the Resident Evil series does so well, it gives you a choice. Lickers are still classed as a normal level enemy in the game, they are just tougher than the usual zombie. This is important to know as your choice on whether to fight or fly needs to be carefully thought about, again especially with the first one we encounter. If you choose to run, the Licker will remain in that corridor until you decide to kill it (like a normal zombie). Which will be fine as you will find better weapons to eventually deal with it quicker than your handgun. Or you could choose to fight this horror now where you stand and just eradicate this problem now (made a lot easier if you managed to pick the shotgun up from the gun shop). There is also the question of ammo management, the first three instalments lean you away from shooting everything that moves and encourage taking a more tactical approach. Horror games are not as scary if you have enough ammunition to wipe out every monster without even thinking about it. 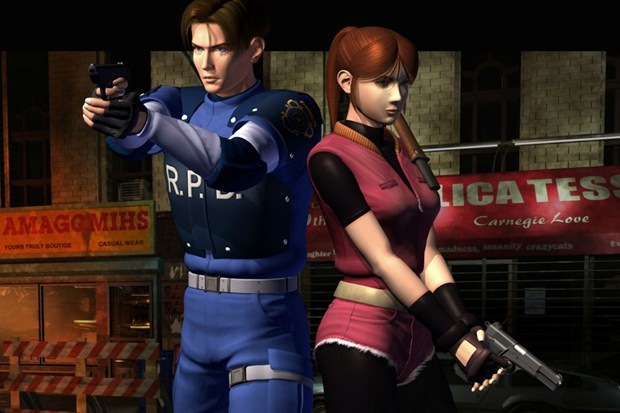 Resident Evil 2 gave us another two great characters to play as, introduced us to new lovable heroes and villains, and gave us some of the most loved puzzles in the PS1 era. It was a slight (very slight) move into a more action orientated instalment but still reminded us in true Resident Evil fashion that this is not a standard shooter, and we are not Rambo and will quickly become a zombie snack if we get too cocky. This game is a classic, there is no questioning that, and still in 2016 you can play this horror master class and still have a blast. To me, it comes as a very close second in terms of my ranking of the Resident Evil games, just behind the remastered original. With the remake on the horizon, now is a great time to jump back into the horror that is…Resident Evil 2.

Next week, our first negative look at the series. 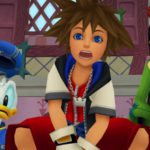 Hacked Off: When You Can’t Skip Cutscenes in Video Games 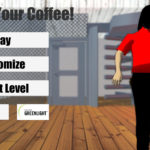 Indie Freebies: Don’t Spill Your Coffee and Others