For years now we have been taking up contracts killing marked targets in hundreds of different ways. It’s become something of an addiction of mine. I may be exaggerating but I do occasionally find myself being taken back to becoming one of the most iconic video game assassins of all time. Of course I’m talking about Agent 47. His escapades from Hitman: Codename 47 to the more recent Hitman: Absolution, have never eluded my crosshairs, I quickly became a fan.

2016 is upon us and 47 is back in his latest release developed by IO Interactive simply called Hitman. Worth noting is my favorite game in the series being Hitman: Blood Money as the mechanics and mission structure were just fantastic. Having the freedom to approach each target made you think in morbidly creative ways. Well, Hitman has returned the series to that very same structure. A very wise move if I do say so myself. Absolution was by no means a bad game but the linearity and story focus took away the true feeling of being Agent 47. I desperately wanted the freedom back, and I got it.

For now though, we are only treated to the intro pack which includes two Prologue missions and a story mission located in Paris. We also have alongside them Contracts mode which are community based missions created by other Hitman players, Elusive Contracts mode which are single-try, timed missions and lastly Escalation mode in which the missions within it rise in difficulty as you complete them. It’s an great starter package that starts off on the right foot. Unfortunately Elusive contracts are not yet available so I will exempt them from this review. 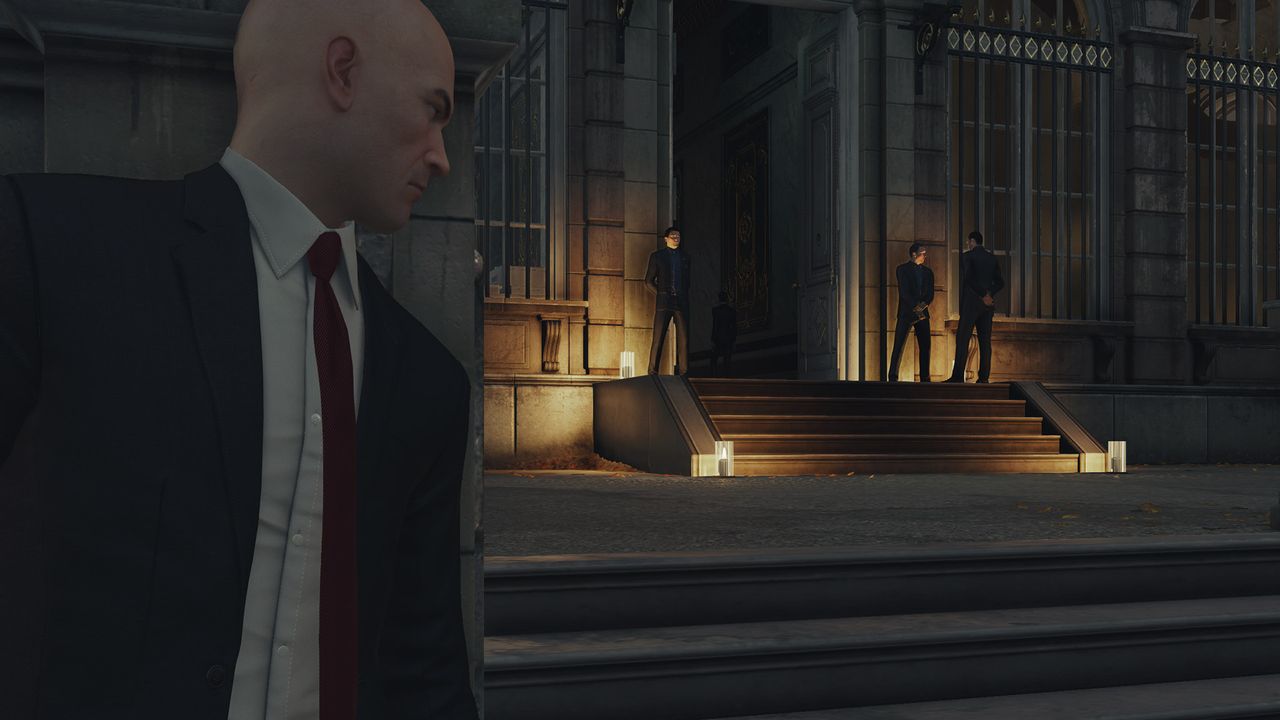 The Prologue starts with 47 getting recruited by his infamous handler, Diana Burnwood. Her boss, who she speaks to behind one-way glass whilst 47 paces in an interrogation room, is skeptical whether he will benefit them or turn his back on them if given the opportunity. It’s an eye opener to 47’s origin but doesn’t really contain a great deal of information. Maybe we may see flashback missions in the future, who knows.

The missions are mocked set-ups which were featured in the beta. Set aboard a make-shift yacht and an aircraft hanger, both of which require you to take out a single target. Luckily, the game guides you through them and are great tutorials for the road ahead before taking off your blood soaked leash. 47 controls exactly how he always has from the third person perspective. It’s up to you, as 47, to use your imagination to make the kill how you see fit. My first task was to take out Kalvin Ritter who is aboard his yacht to make an important deal with a client. Your client though needs him erased. It’s best to do it silently or, even better, without anyone knowing you were even there. As I mentioned before, the game walks you through it the first time. The iconic Hitman series’ mechanic of subduing workers and police to obtain their uniforms returns in all its glory. It works a lot better than it did in Absolution as now wearing a uniform no longer requires you to avoid anyone else wearing one like it. Instead, white dots above the heads of the suspicious non-playable characters (NPC’s) indicate which ones are no fools. It’s fantastic mingling amongst fellow fake colleagues. Blending in as bar staff or patrolling as a fake police officer. Taking a more unique uniform, however, allowed me more access around the ship. I went with the ships cook as I swiftly smacked him over the head with a strategically placed hammer laid nearby. I then needed to hide the body leaving no traces. It’s moments like these that make you feel like the genetically enhanced assassin you’re meant to be.

Getting caught is a whole different experience. The combat is great although not often will 47 be equipped with enough firepower to handle every NPC who happens to own a gun who wants your blood. The game penalises you for killing non-target personnel so it’s strictly encouraged to stay stealthy. 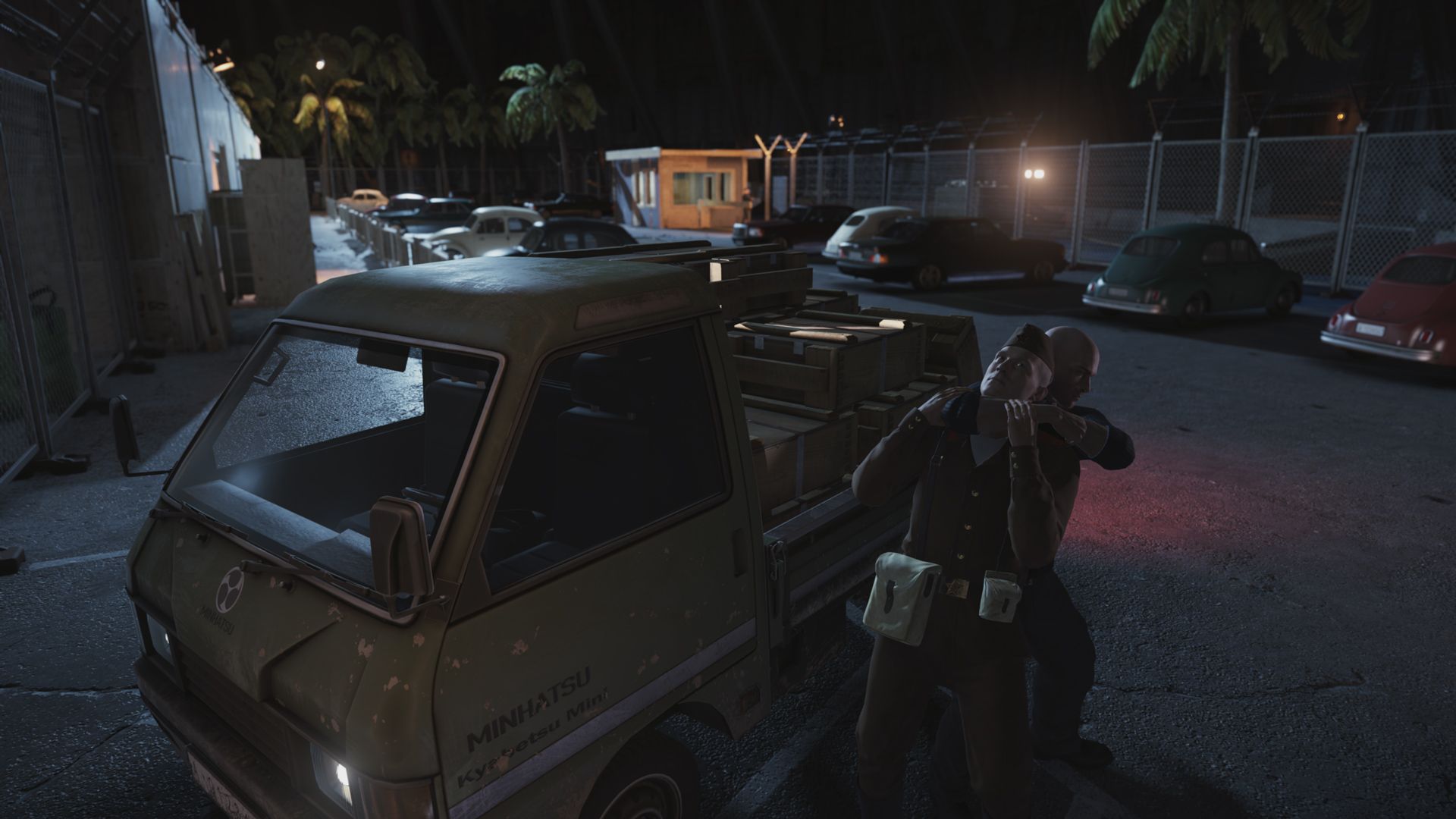 The Paris mission allowed me to think for myself. It’s one of the most exciting experiences I’ve ever had with a Hitman game and it took me straight back to my time playing Blood Money. I had full reigns for my movements and actions. This time though, two people needed to mysteriously disappear. Rather than going it alone, you do have the option to select a number of premeditated ways which can be tracked in game. Tracking them enables an icon which you follow to unlock a series of unique events to the eventuality of the targets untimely demise. New ones can be unlocked by listening in to other characters conversations too. Every minute spent hunting for ways to take out my contracts were golden but if you’re like me and you prefer to do things properly and cleanly, you’ll need a lot of patience.

Outside of the main missions, Contracts mode and Escalation mode are remarkably similar. Playing missions set up by other players and developers mix things up and keep missions feeling fresh and different. I had to rack my brains and often found myself wandering around looking for opportunities but once I found one, it was a truly satisfying experience.

Hitman looks outstanding on current generation consoles. The ambience and excitement of attending a top notch fashion show is captured beautifully with all the smoke, lights, glitz and glamour. Unlocking more uniforms enabled access to the backstage areas which had models having their make up done whilst in the next room, a cocktail party is in full swing. Outdoors is another breathtaking sight as the sun beams break through trees and buildings in the distance. Fantastic attention to detail in every single room. I had plenty to gorp at as I meticulously plan my assassination.

The episodic structure let’s it’s down for me. If you’re after a full Hitman experience, you won’t find it until later this year as missions are scheduled to be released on a monthly basis. Not something that I wanted from a Hitman game and I’m sure I won’t be the only one.

I’ve always been a huge fan of the Hitman games. Yet, if Blood Money was the pinnacle, then Absolution was the low point for me. In one game it went from superbly-crafted murder sandbox to a fairly generic story-driven stealth/actioner that had more in common with Splinter Cell. The wide-open, intricate and well thought-out maps, each a puzzle with a multitude of approaches, replaced with uninspired linear corridors divided into tiny sub-levels often with no assassination target.

So I was incredibly pleased that Hitman does see a return to the Blood Money formula. The prologue tutorial maps along with the Paris mission are enjoyable, believable and well-designed sandboxes that provide substantial freedom for playful experimentation and offer a reasonable amount of replay value. And I’ve been enjoying attempting the various challenges as well as the Contracts and Escalation modes.

However, I’m not keen on the new “opportunities” system. Hitman games have always relied upon scripted events to provide specific openings, such as a one-off wedding ceremony or opera actors coming out on stage to rehearse every five mins or so – occurrences that felt relatively organic within the context of the game world.

In contrast, individual opportunities are triggered via eavesdropping on conversations/monologues that only occur when you happen to be nearby. This results in NPCs being locked into new behaviour routines (you can almost see the gears moving) and usually involves 47 performing a specified sequence of tasks. As such, they break immersion while circumventing the processes of observation, discovery and timing. It’s like they don’t trust you to figure things out for yourself (though thankfully the murder-by-numbers way points can be turned off in the options).

Plus opportunities do not always overlap well with the systematic AI, so it’s very easy to confuse the game by behaving in unexpected ways during these scripted events and it can result in NPCs getting stuck and other oddities.

I also found there’s a lot in the game that breaks immersion. Such as virtually no foreign accents during the Paris mission, despite its location or the nationality of many of the characters, or the bemusing lack of reaction to guards dragging a body bag through a crowded room. Indeed, within minutes of a “tragic” accident involving one of the event’s hosts, it’s pretty much back to business as usual. And there’s a strange disconnect between the fashion shown and the secret auction held within, a security alert in one has no effect on the other.

Lastly, I’m very cynical about the episodic release structure. The model is so heavily incentivised towards the “Full Experience” that it’s hard not to see this as a thinly-veiled ruse for releasing an unfinished product before its time (Hitman was originally pitched as a full-release game) and taking the pressure off IO-Interactive to deliver top-notch content for each episode. Though hopefully the developer will use it an as opportunity to respond to player feedback between episodes.