Always short of a few bob and looking for something a bit different, each week I scour the internet for fun, interesting, or just plain curious Indie Freebies. Although this week I had to wade through way more garbage than usual to find some good stuff! Anyway, this week’s highlighted titles are: Ravenfield, a Battlefield-flavoured single player FPS; and Looking Back, a narrative-driven exploration game about empathy and grief.

Are you bored to death of Battlefield 4 and weren’t lucky enough to receive an invite to the BF1 closed alpha (sadly, I can tick both of those boxes)? Then perhaps in the interim you can console yourself with a round or two of Ravenfield. What began as an experiment with AI and ragdolls has evolved into a tactical and well-made single player FPS.

Modelled on Battlefield’s flagship conquest mode, it plays out in a similar vein to the solo mode in BF2. The aim is to beat the enemy’s score by 200 points. You do this by working together with the bots in your team to capture flags and “murderising” those pesky reds. Holding flags not only provides additional spawn points but also increases your score multiplier. Plus, you can also win by controlling all the objectives.

Like the Battlefield games there are a range of weapons and gadgets to choose from before you deploy, essentially allowing you to create your own role. So, you can be a sniper or an assault trooper, you can take a dumb-fire rocket for dealing with armour, or you can carry ammo or medic bags to support the front-line troops. 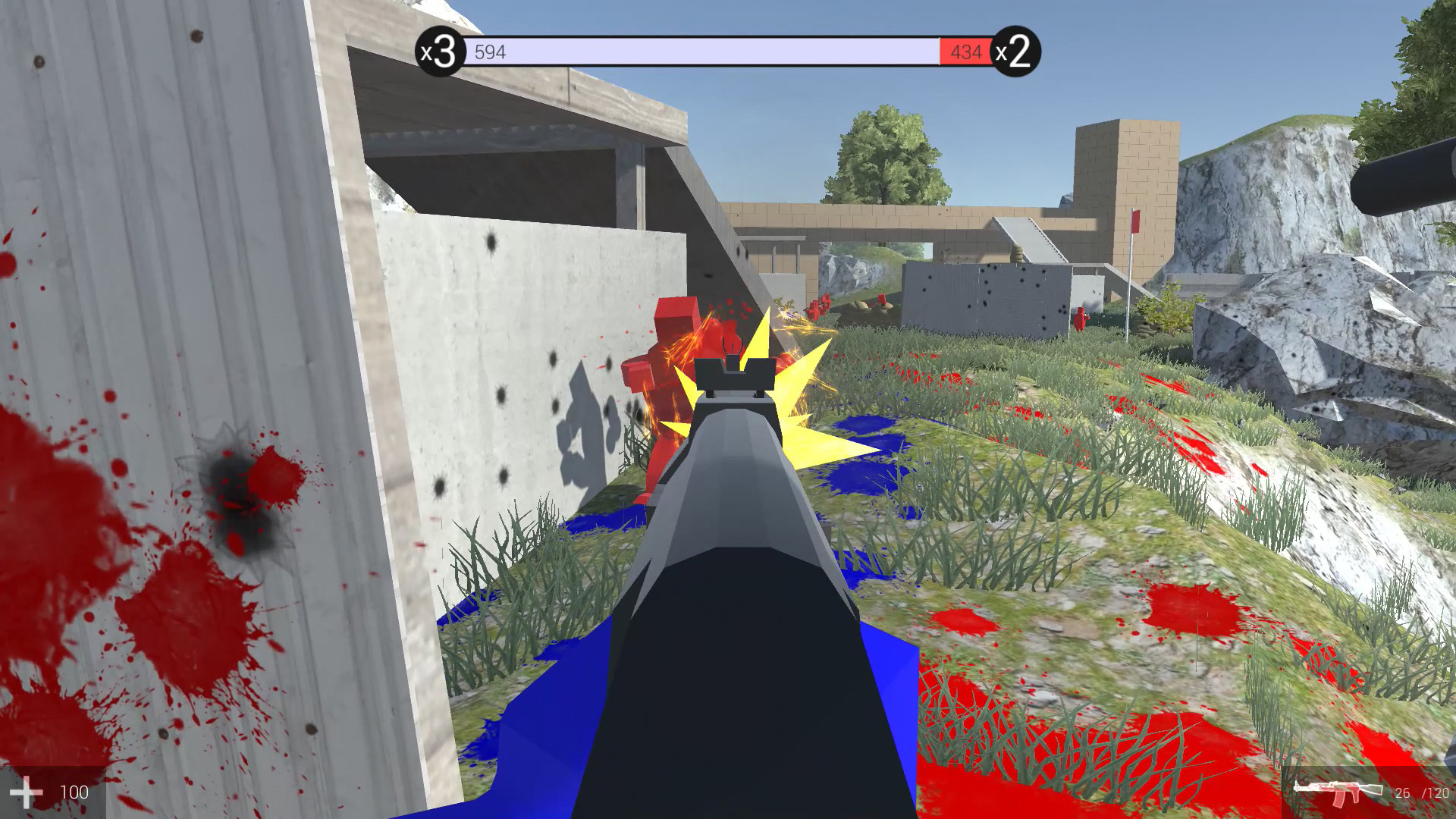 Enriching the experience are a variety of vehicles such as helicopters, jeeps, and boats that both you and the bots can utilise. The attack chopper even has a gunner’s seat, or you can sit in the back of transports lighting up bad guys while one of the bots drives. Importantly, these handle reasonably well and are tactically useful. Though I would like to see some proper control customisation. In particular, I find the helicopter difficult to fly with the default key bindings as I’m so used to my BF4 set-up (i.e. A/D for roll, mouse for yaw and pitch reversed).

Ravenfield also features semi-realistic projectile physics, including bullet drop, travel time, and spread, and the weapons have appreciable recoil, so you need to lead targets and fire in short, controlled bursts (i.e. tap-firing). Perhaps most impressively, the AI works very nicely (well, for the most part). The bots spread out and flank as necessary, co-operating effectively to capture flags and destroy enemy transports. They’ll also take and use vehicles appropriately and the team AI selects a complementary mix of loadouts for the bots.

Currently, there’s only one map. A relatively large and open, hilly island peppered with roads, windmills, farms, outhouses, and defensive positions. And while the weapons and models are rendered in very simple low-poly 3D, Ravenfield features solid lighting and shadow effects, and the terrain is convincingly detailed and realistic looking (not entirely dissimilar to what you would expect to see in BF3 or 4). The overall impression is of cute life-sized toy soldiers battling it out on a real island, with red and blue paint splodges on every surface indicating the casualties of war. The horror, the horror! 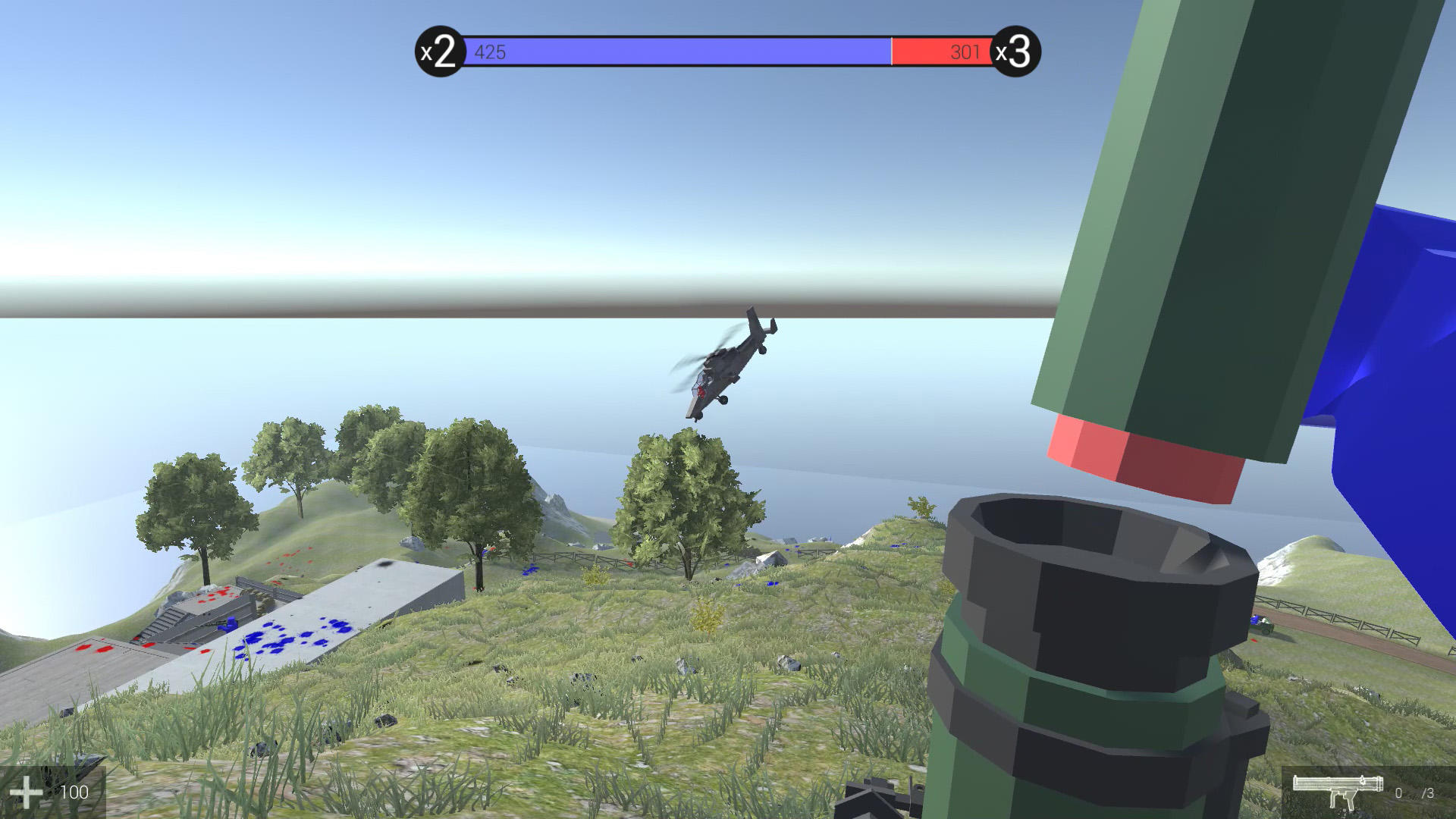 It’s actually a lot of fun, with each battle playing out a bit differently. And it reminds me of the days before Battlefield started getting too dumbed down and bloated by feature creep. My only real gripe (aside from control customisation) is that there is no in-battle map to refer to or HUD markers revealing the position and status of individual objectives. But that says a lot about my sense of direction, or total of lack of it!

I’d love to see it expanded with more maps and perhaps just a few more weapons or vehicles; tanks would be an excellent addition. It would also be great to see co-op or multiplayer modes. Obviously, servers cost money, so I’m not sure about the feasibility of that or even what SteelRaven7’s future plans are. Though they do state that Ravenfield is only a beta and that it “will remain a slightly experimental, for-fun game project”. Anyway, I’ll see you on the Ravenfield!

Ravenfield is available for Windows, Mac, and Linux and can be downloaded for free from itch.io here. 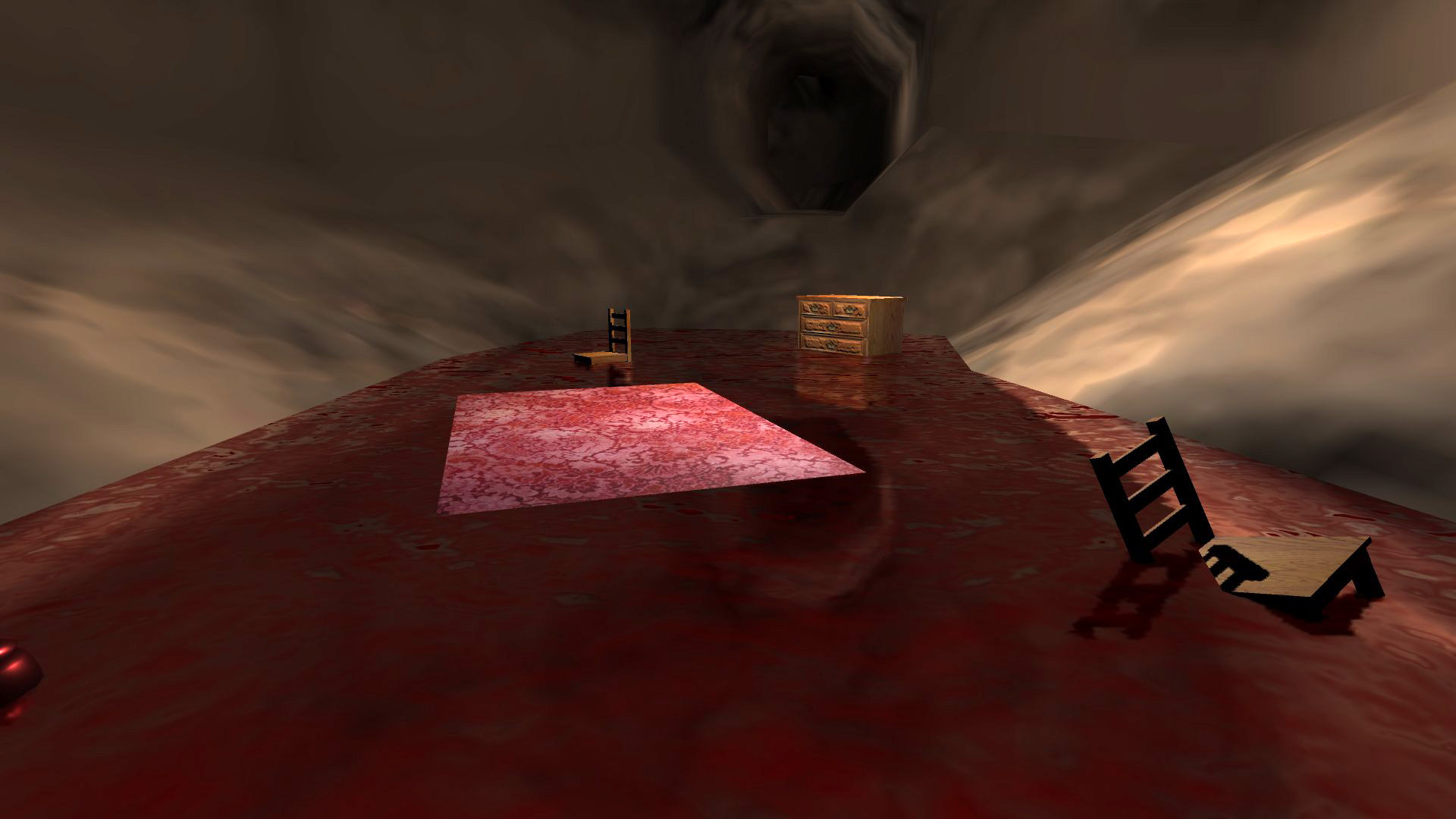 If you love Greek mythology and also want to advance scientific understanding, then you can do both by checking out Looking Back. Developed by Saran Walker as part of her university dissertation, she’s conducting a study based on player reactions to the game. Though if you do want to take part, you need to complete the first section of the online (and anonymous) survey before you begin playing.

Looking Back is a story-driven walking simulator loosely based on the myth of Orpheus and Eurydice. It puts you in the shoes of Olivia, a young touring musician who is always on the road. Stricken with grief over the recent death of your girlfriend Erin, you descend into the underworld with the hope of bringing her back. The narrative repeatedly switches between the past, where you relive the events of the previous year and Erin’s struggle with cancer, and your present journey across the five rivers of Hades.

Tragic and touching, Looking Back is a game about death, grief, and suffering explored from two separate perspectives. Examining objects in the past triggers introspectives and recollections that progress the narrative and reveal the changing relationship between Olivia and Erin, whereas the underworld, laden with surreal symbolism and featuring passionate and sometimes heated exchanges between the two lovers, is a representation of the personal hell that Olivia is going through. Ultimately, she must confront her guilt and regret, come to terms with her loss, and find peace with herself. 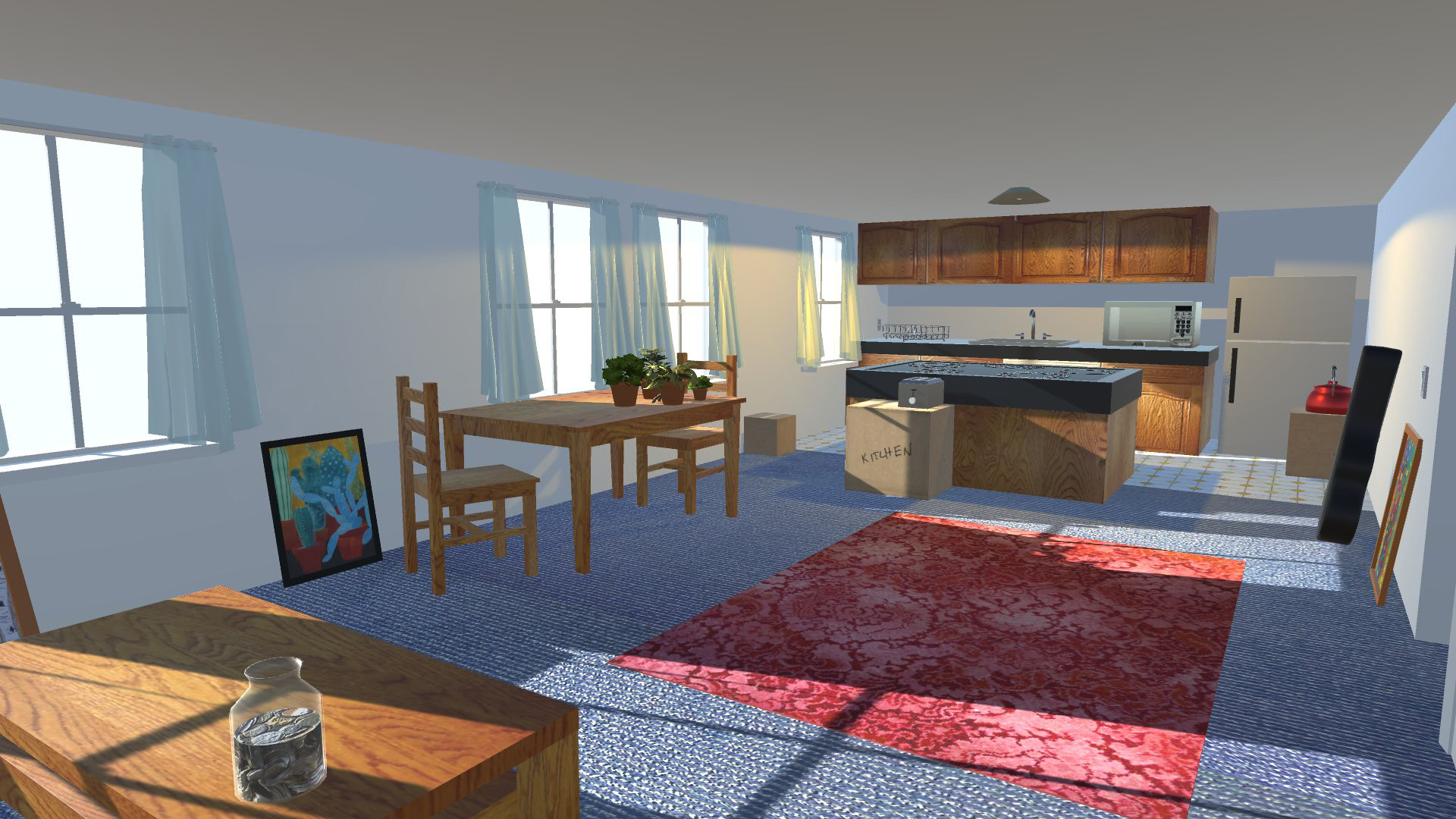 The writing is excellent and the voice acting is solid. As such, it’s hard not to find yourself relating to and empathising with both characters. Though it may be a bit too close to home for some. It’s also fantastically atmospheric thanks to some great use of ambiance and music – alternating between the brooding and increasingly unsettling industrial soundscape of Hades and the lighter and more soothing folksy guitar accompanying most of the flashbacks. Oh, and it’s jammed packed with allusions to classical literature and mythology.

Looking Back is available for Windows and Mac and can be downloaded from Game Jolt here. You can find the survey here. 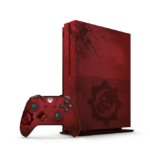 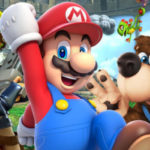