Always short of a few bob and looking for something a bit different, each week I scour the internet for fun, interesting or just plain curious Indie Freebies. This week’s highlighted titles are: Ride with Strangers, a tense experience built around hitch-hiking with potential murderers; Pigsodus, a charming “pigcelart” adventure platformer; and Dead Zombie Land, a fun little arcade game about exploding zombies.

Reflect Studios’ Ride with Strangers may be one of the oddest video games I’ve ever played. It’s a concept demo for what is essentially a hitch-hiking simulator inspired by jump scare-fest Five Nights at Freddy’s. Think violent 1980s action-thriller The Hitcher. But instead of picking up a sardonic-grinning and sadistic Rutger Hauer, it’s actually you flagging him down for a ride. Will you survive the encounter?

The premise is more than a little tenuous. You play Elora, an ambitious young woman on her way to a crucial job interview. Trouble is, she’s only just been been informed that not only does it require travelling across state, but it’s scheduled for first thing tomorrow morning. Jeez, have these people not heard of telephone interviews or Skype!?! Anyway, so you head out late at night in the hope of getting there in good time. But who’d a thunk it, the car breaks down leaving you stranded in the middle of nowhere. Ever determined and possibly insane, you opt to hitch a lift. 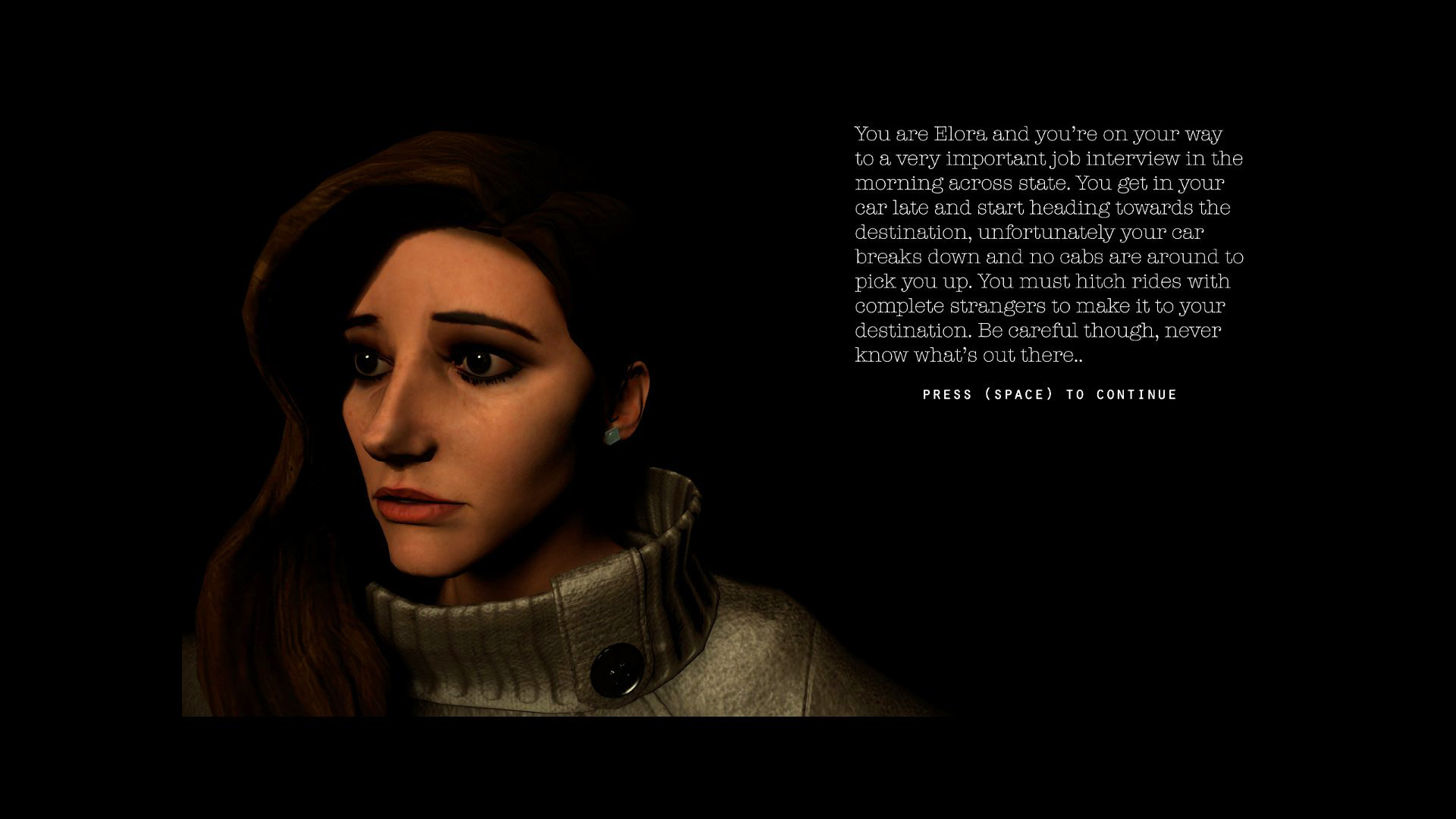 Following a brief tutorial by way of a couple of illustrated slides, Ride with Strangers commences with you standing by the side of a gloomy forested road in the twilight hours. It’s eerily quiet with barely any traffic on the road. And curiously it only travels in one direction. Yes, you guessed it – the one you’re headed in!

So, first things first, you need to flag down a ride in what feels like a fairly pointless and uninvolved mini-game. It boils down to standing under a light and aiming an eye-shaped reticule at a passing automobile to make it stop. You then have to decide whether or not to accept the lift. Not that you really have a choice as you can only walk a short distance before hitting an invisible wall.

The real fun begins once you’re in the car, which forms the bulk of the gameplay. The aim is get to your destination unscathed. Easier said than done when you’re sat next to a mercurial psychopath with nefarious intentions. Luckily, there are a few things you can do to minimise your risk. 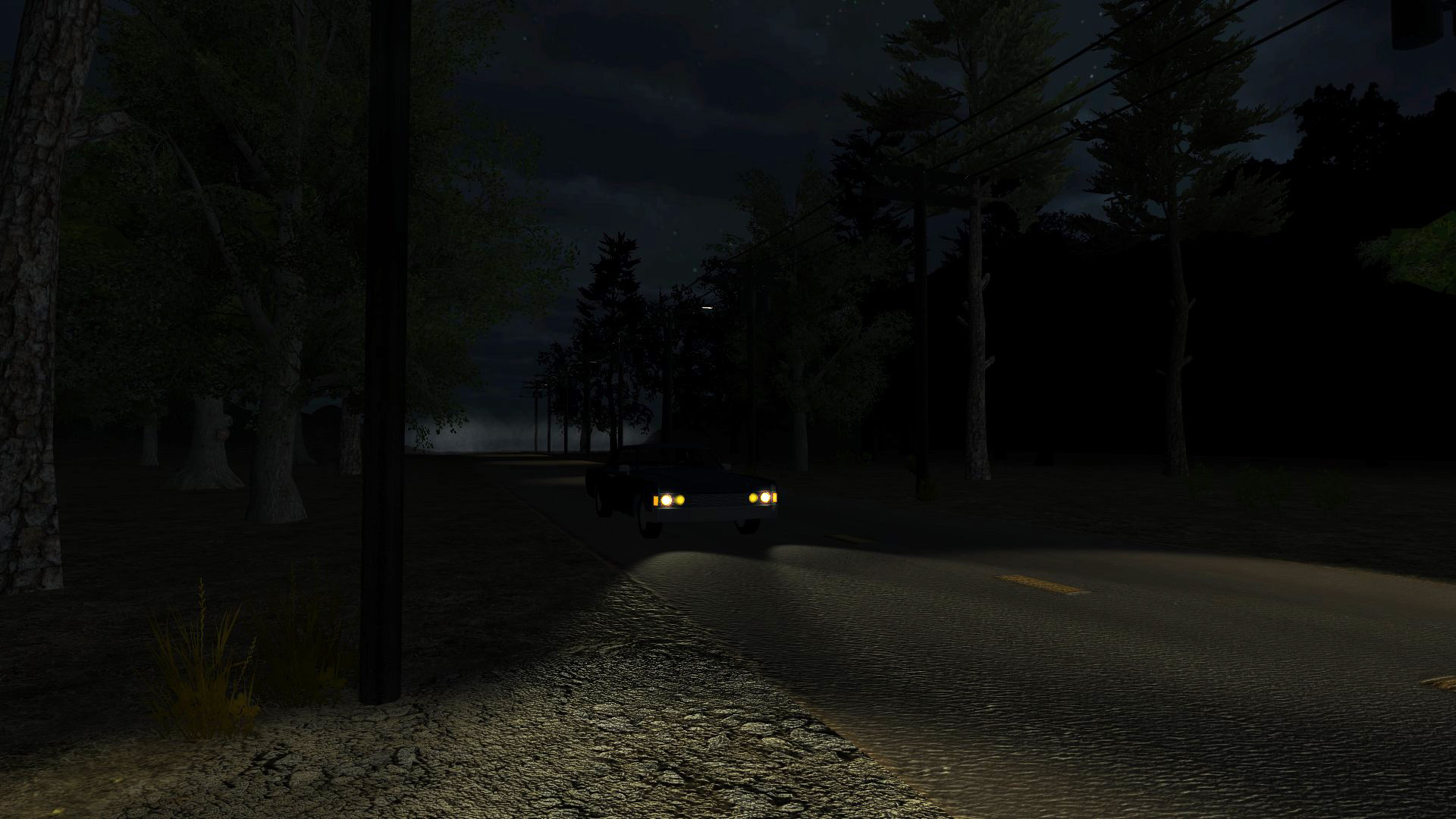 For a starter, answering the creepy murder priest’s innuendo-laden questions correctly and promptly reduces the chances of him going for you. He’ll ask things like, “This is a dangerous place to be hitch-hiking, what is a precious young thing such as yourself doing out here?”. Then you’ll be given four possible responses, though it’s not entirely clear what constitutes a good answer or when you’ve given one. Presumably, the best answer would be anything that demonstrates strength of character or suggests that you will be missed should you not show up somewhere.

Also, Rev. Nut Job won’t attack if you’re looking directly at him. But don’t think you can just stare into his crazed eyes indefinitely. Doing so gradually freaks you out, filling up the “sketch meter”. Eventually, you’ll reach a point where you can no longer stand to face him. The trick is to steal brief glances at him at regular intervals. You can also roll down the window to grab some fresh air, which very gradually calms you down. However, having the window open halves the time you have to respond to the driver’s menacing questions.

Lastly, you can magically accelerate the car by clicking on speed signs that you pass, shortening the journey (yes, really!). And if all else fails, you can bail the vehicle at any time by tucking and rolling. The downside is you can only do this twice before being teleported back to the original spawn point. Oh, and you’ll need to hitch another ride. However, as the demo only features one stranger, it will be the pervy padre again and exactly the same dialogue (there’s no conversation branching).

Riding with Strangers is initially a very tense and unsettling experience. It’s appropriately atmospheric and suspenseful thanks to some decent graphics and sound design, and the voice-acting is well done and genuinely disturbing. I thought the troubling sounds that seem to emanate from the boot were a nice touch, and it did make me half jump out of my chair the first time he went for me. But the novelty wears off quickly, and the mechanics are far too gamey and unengaging. 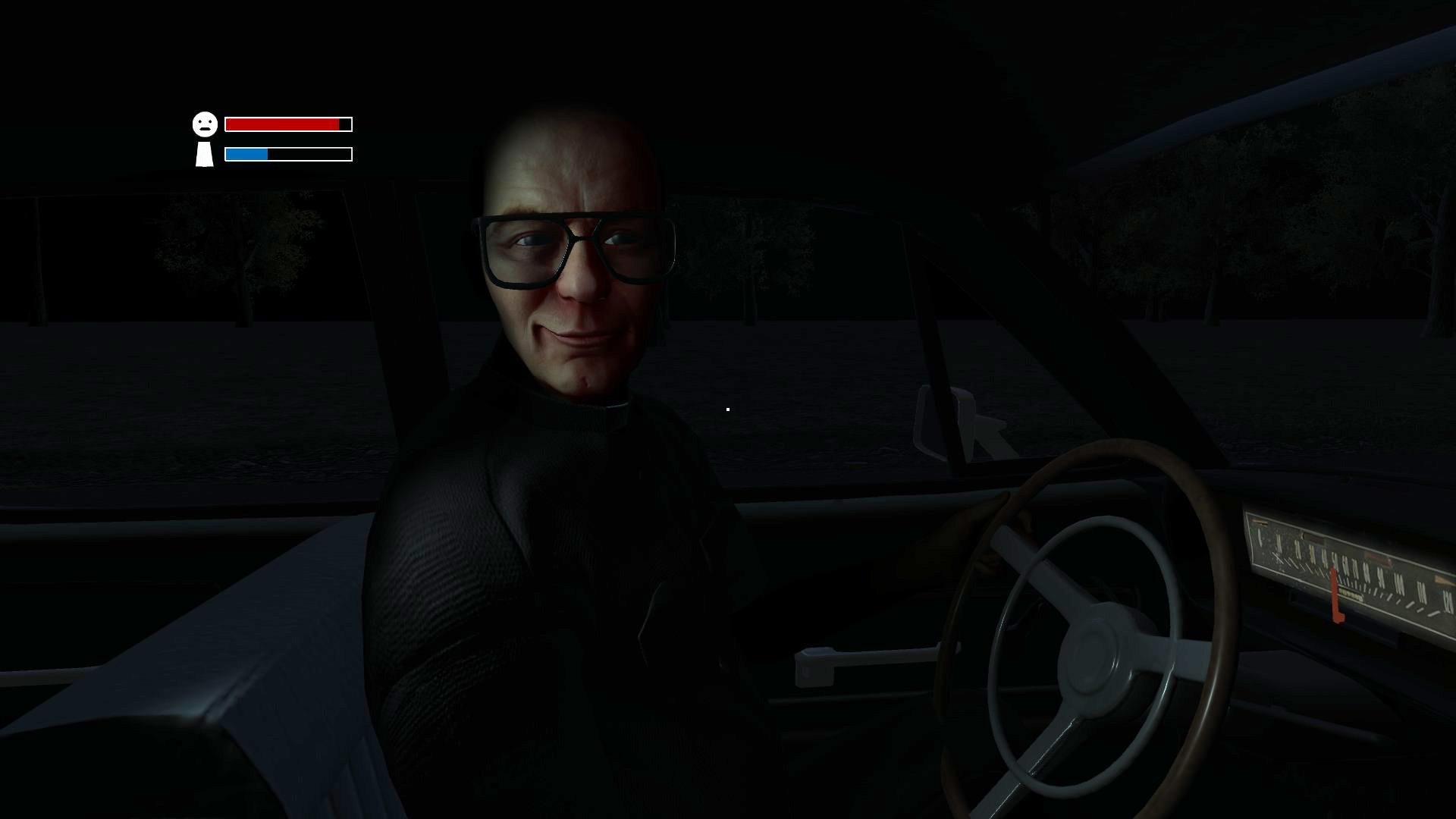 An expanded version has actually been successfully funded through Kickstarter. Yet, I just can’t see this holding up on repeated or longer playthroughs, even with the promised addition of multiple strangers. Also, with its strong sexual overtones and the whole attractive-but-helpless-young-woman trope so typical of 1980s video nasties and bad slasher flicks, it strikes me as being a tad crass and perhaps even voyeuristic. Though that could just be me being uncharacteristically prudish.

That said, I still recommend giving it a go as it’s such a bizarre idea for a game and something you really have to experience for yourself.

Ride with Strangers is available for Windows and Mac and can be downloaded from Game Jolt here. You can checkout the Kickstarter campaign here. 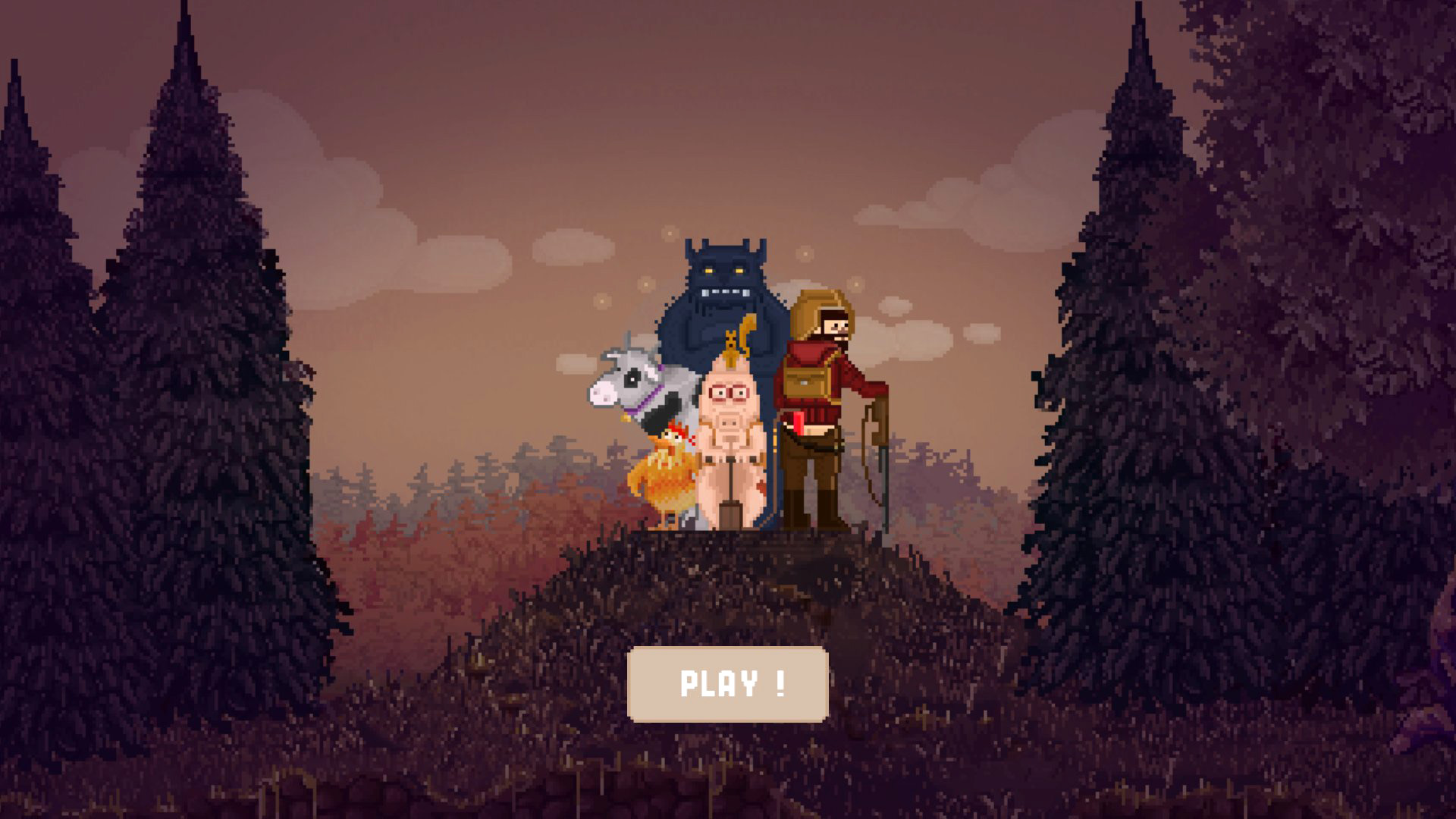 On a much lighter note is Pigsodus, a short demo for a charming adventure game currently seeking financial support through Kickstarter.

Pigsodus follows the exploits of Horace Oinkstein, a nerdy science-loving pig who lives an idyllic life on an Alaskan farm. That is until a mushroom-inspired vision involving a demonic toad known as Beelzebuto urges him to investigate the disturbing truth behind the farm. Before he knows it, Oinkstein is on a quest to save himself and his animal buddies from Theodore Cleaver – a merciless butcher who raises pigs in order to feed his overweight mother.

Chock full of mischievous humour, cheeky innuendo, and a plethora of pigtastic puns, Pigsodus seamlessly combines platforming, point-and-click, and RPG elements to create an enjoyable and refreshingly different take on the traditional adventure outing. You’ll find yourself jumping around the environments, solving inventory puzzles, finding hidden items using your keen sense of smell, and interacting with quirky characters. It even features stealth mechanics for hiding from foes, or you can battle it out with them by way of simple mini-games.

It’s worth playing for the stunning pixel art alone (I defy anyone not to fall instantly in love with that gorgeous multi-layered parallax scrolling!), but the retro-tinged soundtrack is also bloody brilliant and actually threatens to steal the show.

Psilocybe Games are looking to raise around $30,000 and are currently at just under $5,000 with 24 days to go. The full game promises eight meticulously drawn areas jam packed with secrets and point-and-click puzzles, a variety of unlockable skills, and a wide range of interactable characters.

Pigsodus is available for Windows and can be downloaded from Game Jolt here. The Kickstarter page is here and includes a photo of a bespectacled dog using a laptop 🙂 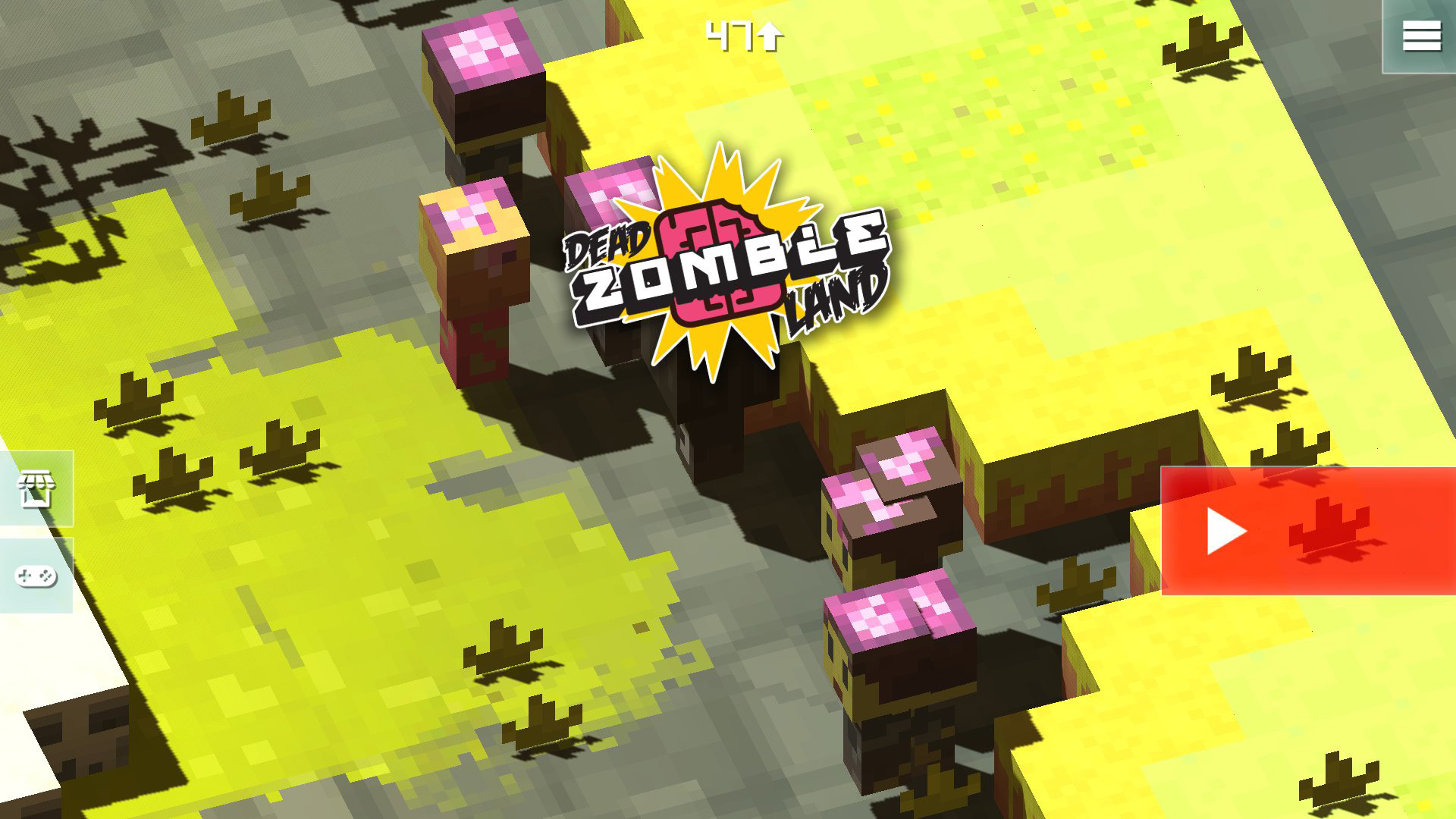 Last but not least is a game about exploding zombies. Apparently, the apocalypse happened and the zombies won. Now you have joined the ranks of the undead and your head is about to explode. As it says in the blurb, why not?

Rendered in fabulously cute Minecraft-style visuals, with surprisingly good lighting and shadow effects, Zombie Dead Land is daft, challenging, and fun. Well, for at least 10-15 minutes. With 10 seconds before you go kaboom, the aim is to take as many animated corpses with you as possible. The catch is that on each respawn, you must destroy an equal or greater number of zeds. The key to success is not biting off more you can chew.

For each kill you earn money that can be spent on continues, upgrades that last for just one round, and new playable characters such Pewdeadpie, Diewalker, and Cap Z. There’s also a variety of arenas, which seemed to be cycled through randomly, with some more challenging than others due to their layout. And capping it off is a marvellously funky spaghetti western-infused ditty. 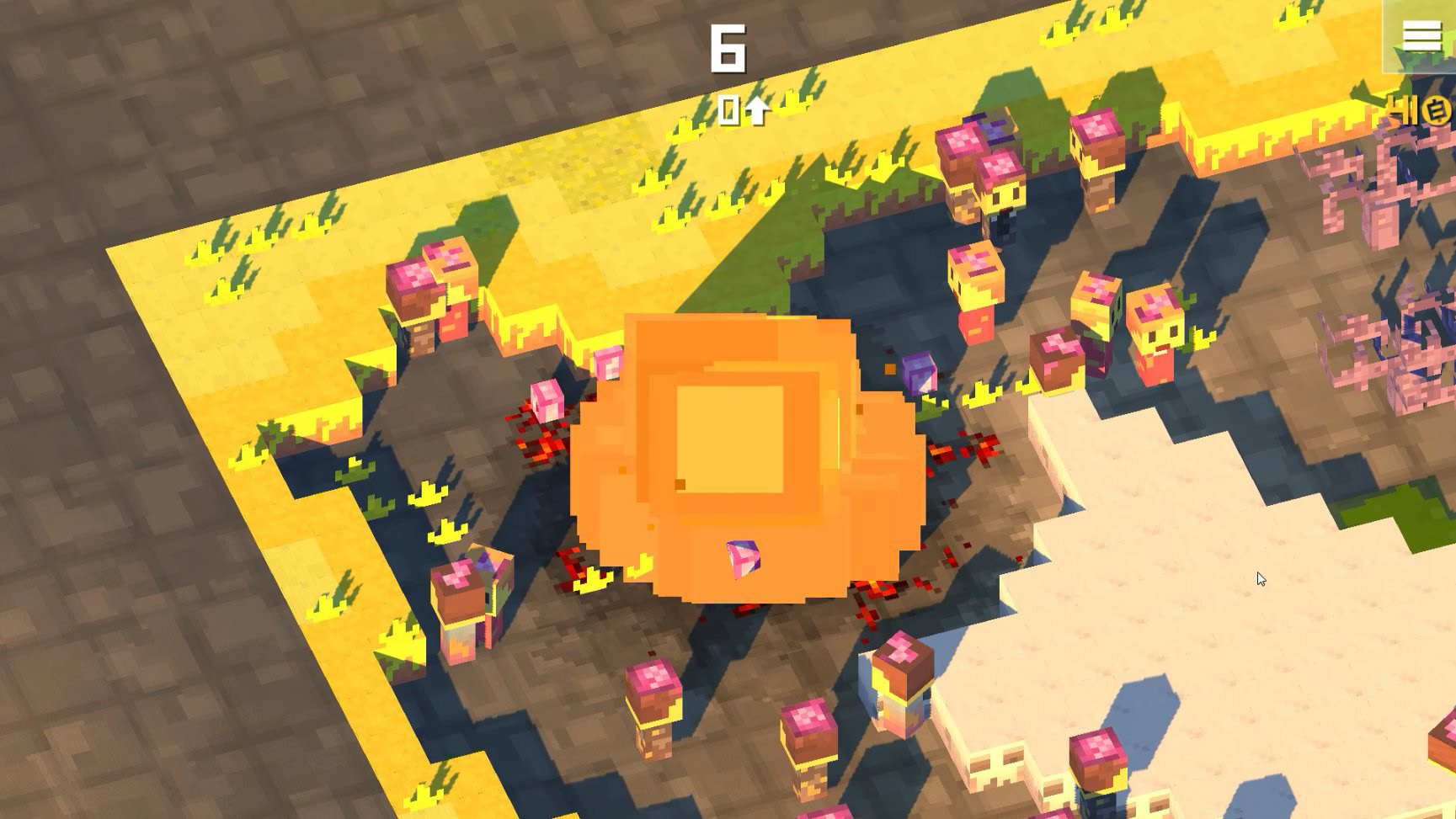 CruelByte’s Dead Zombie Land is available for Windows and Mac and can be downloaded from Game Jolt here. It’s also available for Android and iOS from their respective stores.

Right, I’m off to see if I can beat 47 zombies without purchasing a continue. 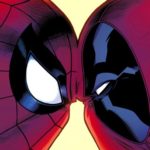 Can a Deapool/Spider-Man Crossover Game Ever Be a Possibility? 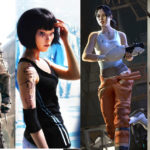