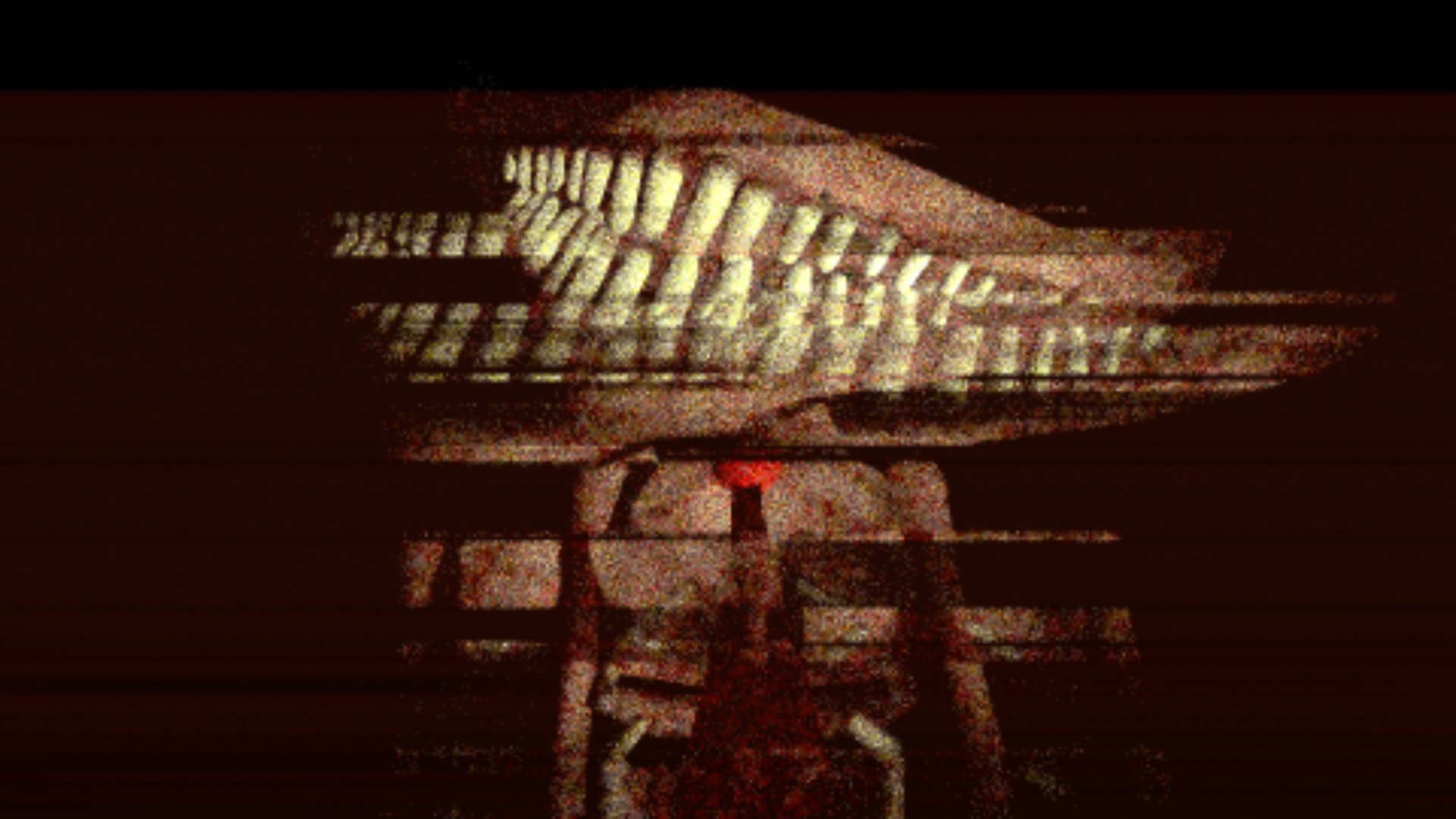 Always short of a few bob and looking for something a bit different, each week I scour the internet for fun, interesting or just plain curious Indie Freebies. This week’s highlighted titles are: V.H.S: Video.Horror.Story, a short survival horror that forces you to choose between seeing either the environment or the monsters; Cigarettes, an abstract and introspective walking sim; and Minute of Rage, an uber hard survival platformer set in a hellish arena. 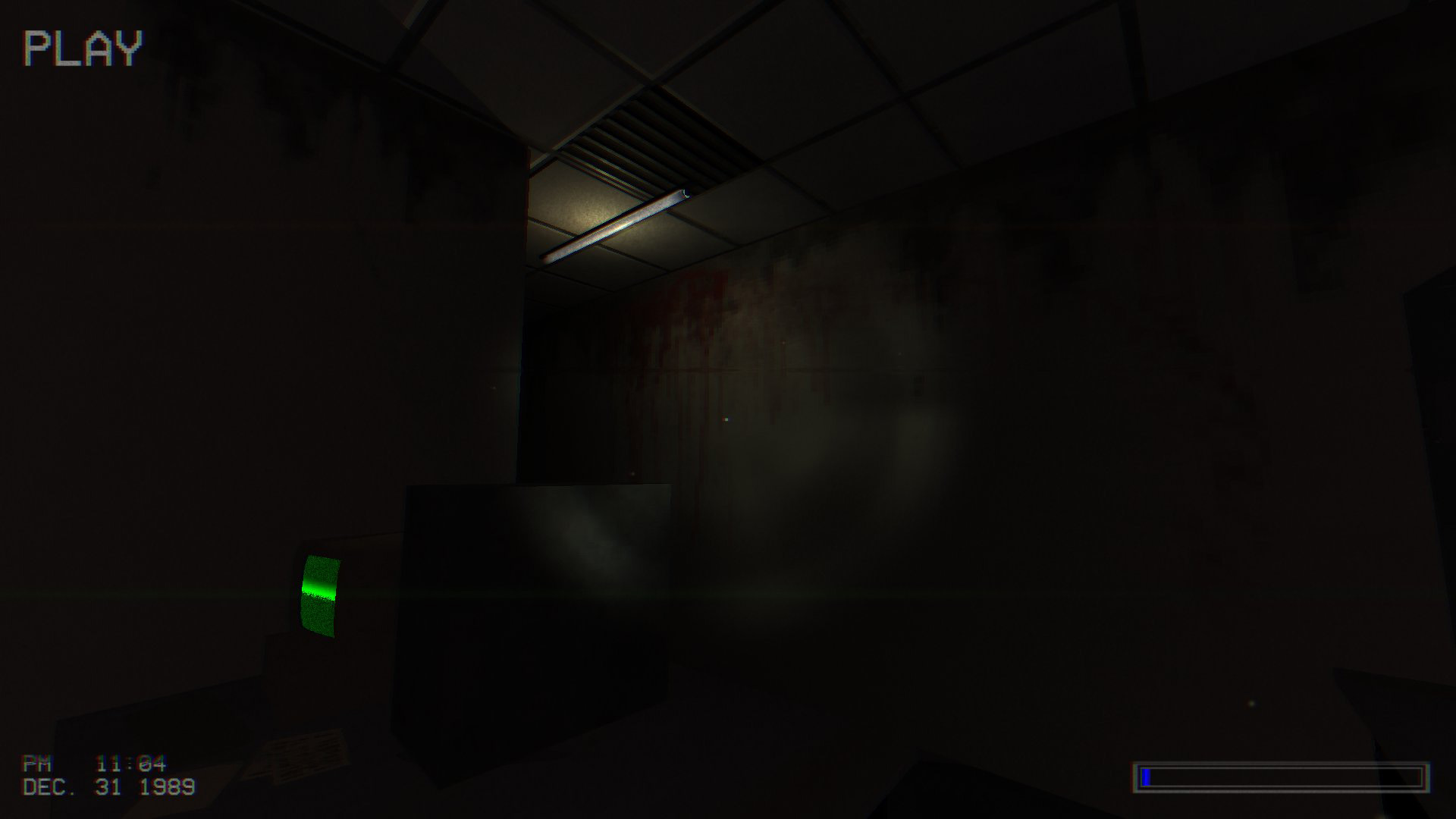 As I’ve probably mentioned before, horror fiction often relies on characters behaving in idiotic and irrational ways. One particular bug bear of mine is how and why people manage to keep filming everything despite being attacked and chased by unspeakable monstrosities or deranged killers. Well, V.H.S: Video.Horror.Story actually gives you a reason to keep holding onto to that camera – you can’t see the monsters without it.

You find yourself trapped in a murky and gore-splattered office complex with just a flashlight and your trusty VHS camcorder – which apparently was standard issue equipment for desk jockeys back in 1989. Grinning, tie-wearing, human-insect hybrids with blades for legs stalk the corridors. Unarmed and unable to run, you’re only option is to sneak past them. The trouble is you can’t see them unless you retune the frequency of your camera, but then that means your can’t see the furniture. Oh, decisions, decisions!

Yes, logically it makes absolutely no sense. Particularly as you seem to be watching the video on a VCR – the screen display actually says “play” rather than “rec”. But what the hell, it’s an interesting twist on a familiar formula, and suspension of disbelief is a huge part of the genre and video games in general.

V.H.S: Video.Horror.Story is short, claustrophobic, and very creepy. Banging into invisible desks and filing cabinets or not knowing the exact position of the nasties really adds to the tension and the sense of panic. And those creatures generally are quite terrifying, especially if they get you. That said, the ending was far scarier than anything I encountered in that complex – I nearly had a heart attack.

V.H.S: Video.Horror.Story is available for Windows and can be downloaded from Game Jolt for free here. 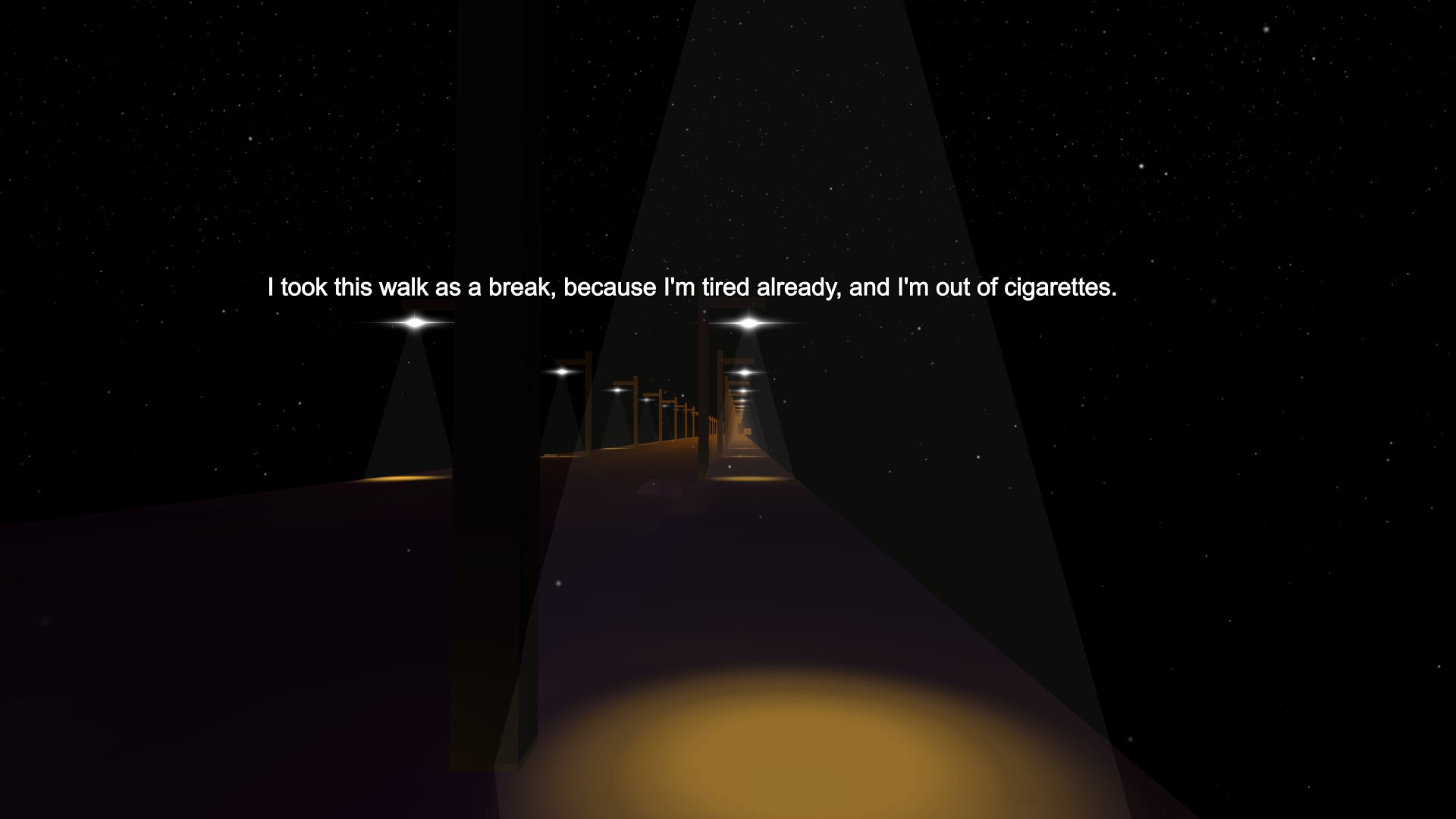 Cigarettes describes itself as “10-minute walk-of-life re-evaluation”. What begins as a 2am stroll in the falling snow to get a pack of cigarettes abruptly turns into a brutally-honest introspective piece.

Clearly drawing from the author’s own experience as an aspiring game developer, it examines the roller coaster of thoughts and feelings that often plague us when we evaluate our lives and ambitions – hopes and fears, inspirations and dreams, drives and motivations, expectations and goals, confidence and self-doubt. As well as how we learn to deal with ego and whim, deadlines and procrastination, perceived success and failure, stress and depression, apathy and lethargy, lack of progress and mental barriers.

Surreal and abstract, it’s a thoughtful piece that the developer hopes will be of benefit to others. As someone who regularly questions past career decisions and what the hell I’m doing with my life, it certainly resonated with me.

Cigarettes is available for Windows and Mac and can be downloaded from Game Jolt for free here. It can also be played in a web browser. 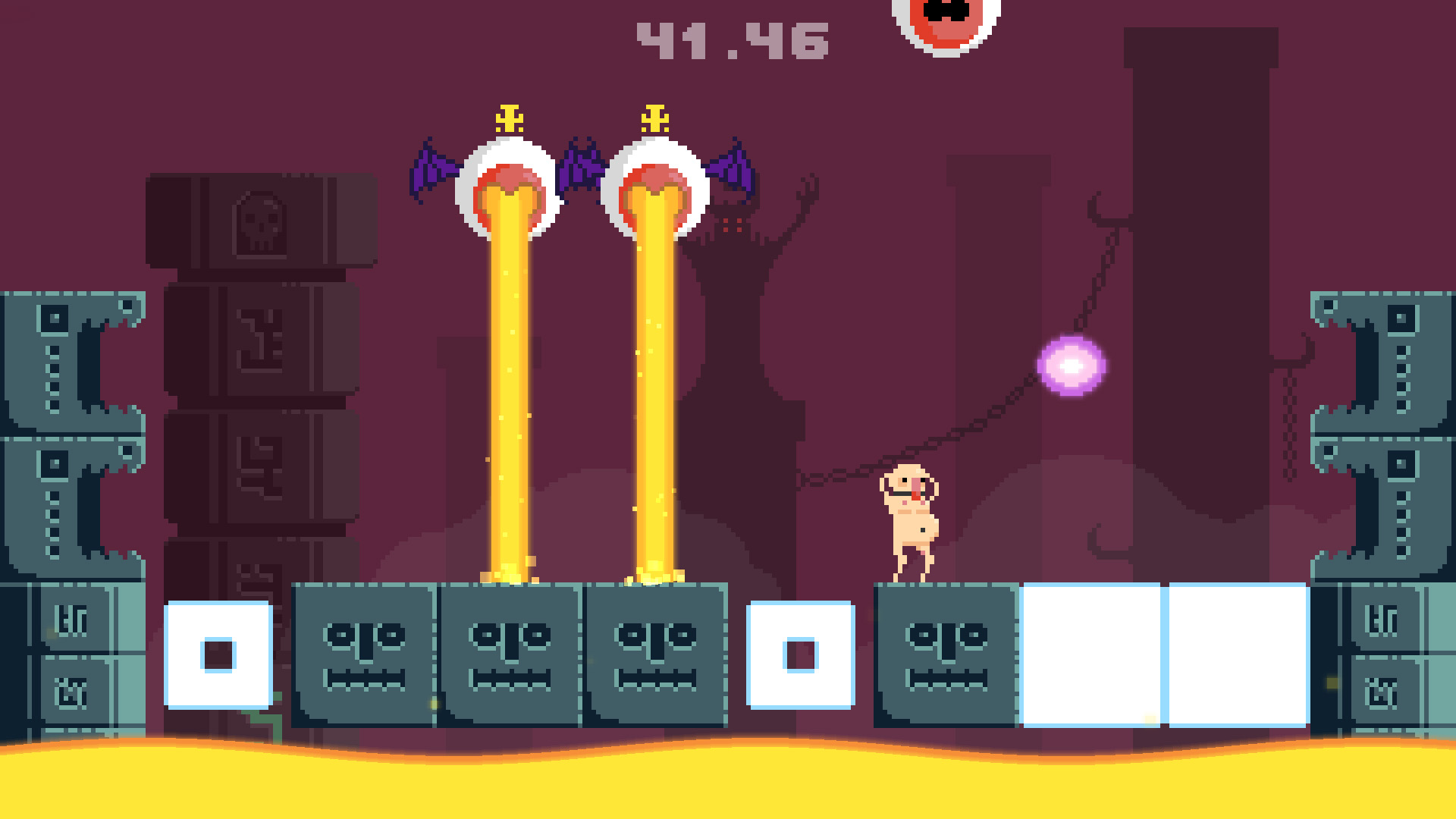 Your name is Bob and you’re recently deceased. Turns out you’ve been a bad boy, so you now have the honour of being Satan’s new bitch. But the dark one offers you a glimmer of hope: survive for a whole minute in the arena of suffering, and he’ll let you return to the land of the living. “Bring it on!”, you exclaim. Obviously, that’s before you saw what this arena actually involves.

Taking place on a single screen, you find your lardy, naked self dancing cockily (pun intended, watch that thing jiggle!) above a searing pit of lava. Various visual signals telegraph incoming danger – you have to dodge horizontal projectiles and vertical lasers while avoiding materialising stakes and dematerialising floor stones. It’s totally random, and you don’t have long to react or much room to manoeuvre. Precision timing, exquisite situational awarenesses, split-second decisions on which way to move, and a helluva lot of luck are the order of the day.

Minute of Rage is demented, fiendishly hard and devilishly addictive. Believe me, it feels like the longest minute of your life (or should that be death?). And yes, at times you do have to resist smashing your monitor with your gamepad, but I will beat my paltry score of only 31 seconds. If anything, the taunts of “owned” and “annihilated” only serve to motivate me further!

Anyway, the pixel art is superb as is the metal soundtrack, plus there are some S&M unlockables to dress Bob up in. It is genuinely quite a funny game. Oh, and it won third place in Newgrounds’ Pixel Day 2017.

Minute of Rage is available for Windows, Mac and Linux and can be downloaded from Game Jolt for free here. It can also be played in a web browser. 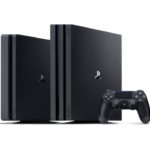 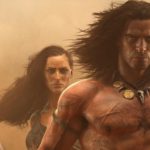