After a good 30+ hours of playing No Man’s Sky, I have yet to reach the centre of the galaxy. However, I feel that I have played a sufficient amount of the game to draw an opinion and write this review. I will also be doing an updated review within the next month, when my journey does take me to the centre of the galaxy. But until then, sit back and enjoy my review of perhaps the most anticipated game in recent memory.

Sean Murray, the co-founder of Hello Games and lead developer of No Man’s Sky, caused quite a stir back at VGX in 2013 where the first teaser trailer for No Man’s Sky was shown. It made ludicrous promises of being able to explore a whole galaxy with a plethora of planets to also land on and explore. Before this adventure to make the most ambitious video game of this generation, Hello Games were best known for making the Joe Danger games, vastly different to their up and coming Magnum Opus. It wasn’t all smooth sailing (or flying) for Sean Murray’s team though, as their offices in Guildford England flooded back in December 2013. Luckily the team managed to salvage much of the work they had already done, so the development process wasn’t halted for too long. After the flood, development of No Man’s Sky ticked along nicely with regular updates from Hello Games and new footage shown of their progress. Originally scheduled for a June 2016 release, the game was held back for two months until August. Due to this delay, Sean Murray actually received death threats from some deeply unhappy gamers, which is just absolutely disgusting. However, it didn’t take long for August the 11th to come around, and I had No Man’s Sky in my PlayStation 4 ready to explore the galaxy and carve out my piece of history. 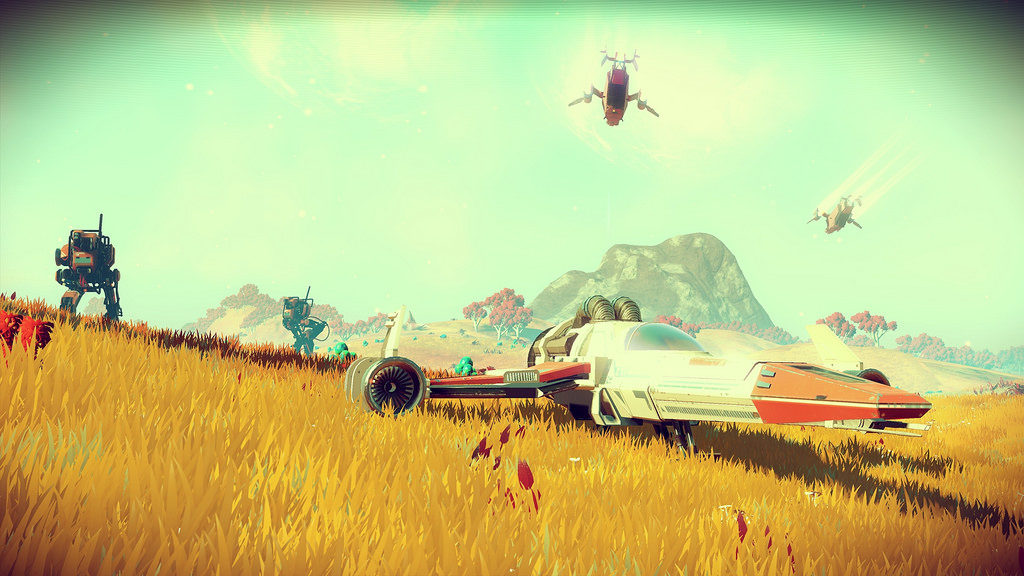 When you first load No Man’s Sky, it can be a bit overwhelming. You spawn at a random point on the edge of the galaxy, and your first mission is to repair your ship and other bits of equipment. This, looking back on it now, is very, very simple, but it’s not all clear when you first set off on whatever alien world you spawned on. You may be lucky like me and land on a relatively safe planet, or you might land on a planet that is extremely high in radiation and you either have to constantly get back inside your ship to recharge your hazard protection or re-charge it outside. This scenario can be a bit off-putting I think to new players, as the second planet I landed on was like this, and I was not totally used to the game yet. The farming of materials, though, is the core mechanic of No Man’s Sky. You need to re-charge your various systems and equipment, and armed with your trusty mining laser, you will come across various materials in the wildernesses of these planets you will come to call a temporary home. The materials are broken down into five different categories: oxides for your defensive equipment, isotopes for your fuel and life support, silicates and neutrals which can be fused with other materials for crafting other resources, and lastly precious elements which have no practical use but can be sold on the galactic market at the various space ports and habitats you’ll come across. This part of the game I actually quite enjoy. I find it very satisfying to be searching for a long time for a specific element that I need and eventually coming across it. One thing that does let this side of No Man’s Sky down is the dreadful inventory management. It seems Hello Games tried to create something with Bungie’s Destiny as an inspiration, but it is just a poor imitation which is awful to navigate and even worse to organise. 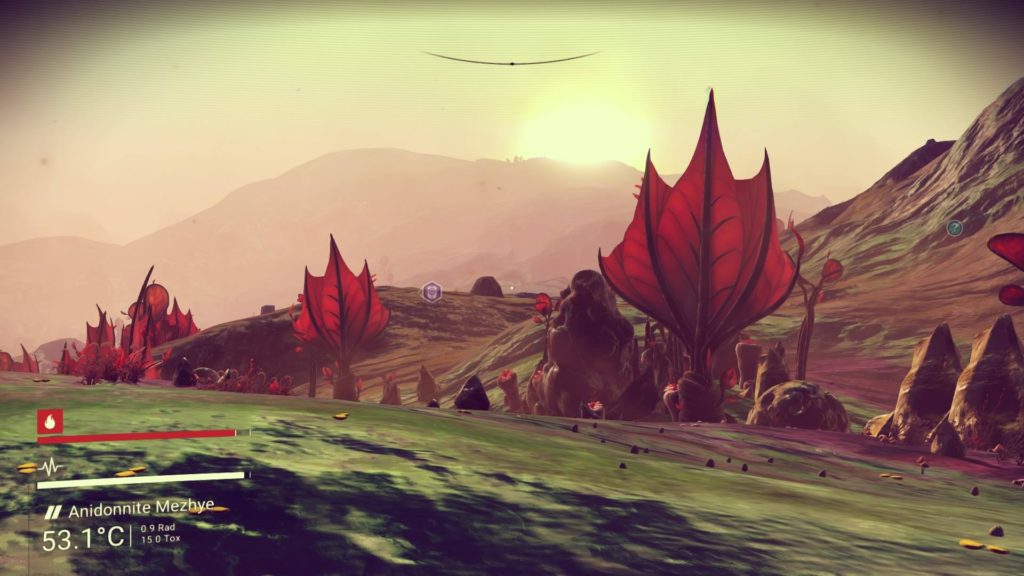 The survival elements in No Man’s Sky, on the other hand, work very well and are at a good level of difficulty for players who are not survival game enthusiasts. While exploring one of the 18 quintillion planets (yes, you read that right), 90% of the time they will not be what we would consider as habitable. So, maintaining your suit’s life support and hazard protection systems is literally life or death. Once you get used to what resources you need, then it will become a bit easier, for example, the most abundant isotope (that I regularly find anyway) is plutonium which will recharge your life support, and oxides recharge your hazard protection. If you are exploring a somewhat forgiving planet, then generally your hazard protection will last a good few minutes, and if you are close to your ship, you can just hop back in and recharge as well. However, the planets that are high in a hazard (cold, heat, radiation, etc.), then your hazard protection will be depleted a lot quicker. This can also happen when a storm starts on the planet you’re exploring. Now, let’s say you are a good five minutes from your ship, your inventory is full of lovely precious materials that you wish to sell for currency and buy a new ship with, and you don’t have anything to recharge your hazard protection. You are happily taking a leisurely stroll back to your ship, scanning some of the absolute bonkers wildlife you’ll encounter and then disaster, a storm. Temperatures plummet to -100c and you have less than a minute until you become a giant block of ice. You may think that it’s game over, but then why does your hazard protection recharge inside your ship? Because you are inside and are therefore guarded from the weather conditions. Now, your mining laser is strong enough to destroy large quantities of plutonium etc., perhaps you could fashion yourself a nice little shelter? You’re right. Your mining laser will let you carve out a life saving cave where you might also discover some really rare resources like gold. 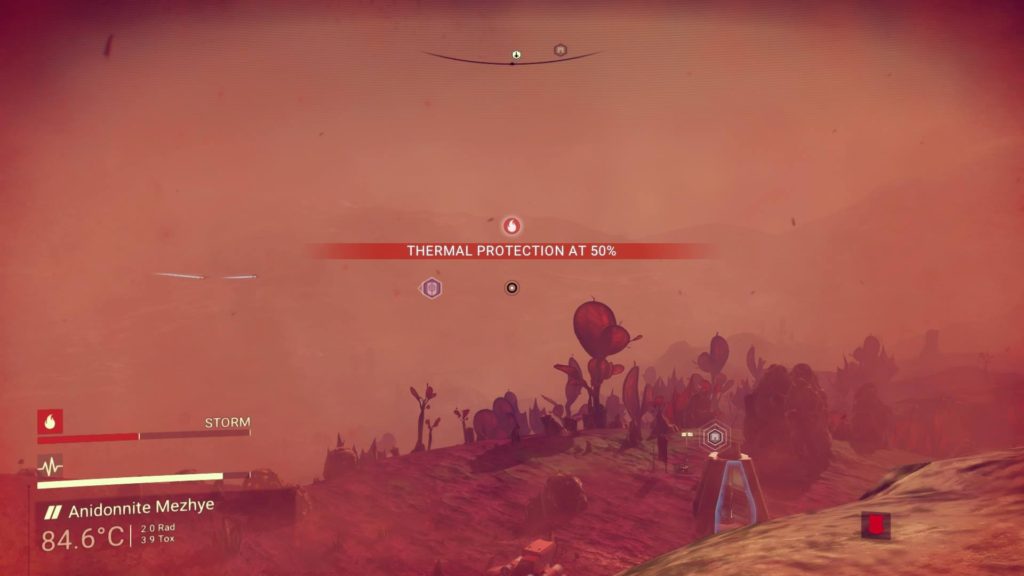 Another big part of No Man’s Sky is, of course, actually flying your ship. Now, this is where I actually start to dislike the game, and there is one big reason why I am not a fan of the flying mechanics and the general layout of ‘outer space’, and that reason is Elite: Dangerous. If you’re not familiar with Frontier Developments’ space simulation, then in a brief summary it is basically like No Man’s Sky apart from the whole game taking place inside your spaceship. I haven’t played the Horizons expansion, so my comparison here will just be the core game. Now, I am a bit of a space nerd, I have always been fascinated with the cosmos ever since I was a child, and that interest has only intensified as I have become older. So, when I played Elite: Dangerous, I was immediately in love with it. Many people found it boring, but to me flying around in my own spaceship around alien star systems was just incredible, and at the moment of writing this review I have played around 200+ hours of that game. No Man’s Sky‘s space mechanics feel like a very cheap, arcade-like version of Elite. For one, when you arrive at a new star system in No Man’s Sky, the planets are not distanced to scale. If you point at a planet, the HUD will show you that it will take a couple of hours to fly to it just on your propulsion engines, but all the planets just look clumped together. In Elite, every star system is to scale. Surely Hello Games could have programmed a similar effect into No Man’s Sky? But alas, they didn’t. The actual flying in No Man’s Sky is also very arcade-like, and to a causal gamer I’m sure they are adequate, but not for someone who has played a lot of Elite where the controls are complex but a lot more fun. 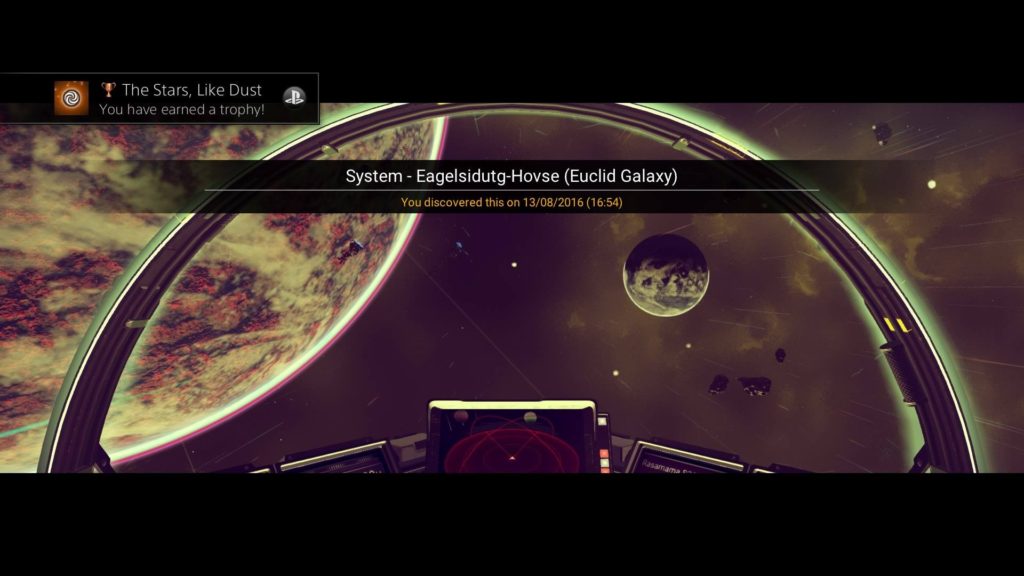 Another problem I find with No Man’s Sky is I don’t know how long it will keep my attention. It is an amazing experience touching down on an alien world and discovering new creatures and re-naming them, but that’s all there is to do in the game. You fly to a new star system, you land and farm materials needed, scan creatures and fauna, visit one of the generic space stations and talk to one of the incredibly dull four alien races, fly to a new star system…repeat, repeat, repeat.

At the moment I am far from bored, but I don’t know how long that will last. Still, in its simplicity could be a key to its longevity. No Man’s Sky is a game you can pick up for an hour or two and then put back down with a sense of achievement. It is a great game to play for a couple of hours in the evening after a long day at work when you want to play something to relax and unwind, especially when you feel you can’t deal with anything as full on as Metal Gear Solid V, for example. This could be the key to No Man’s Sky popularity with the ‘casual gamer’. 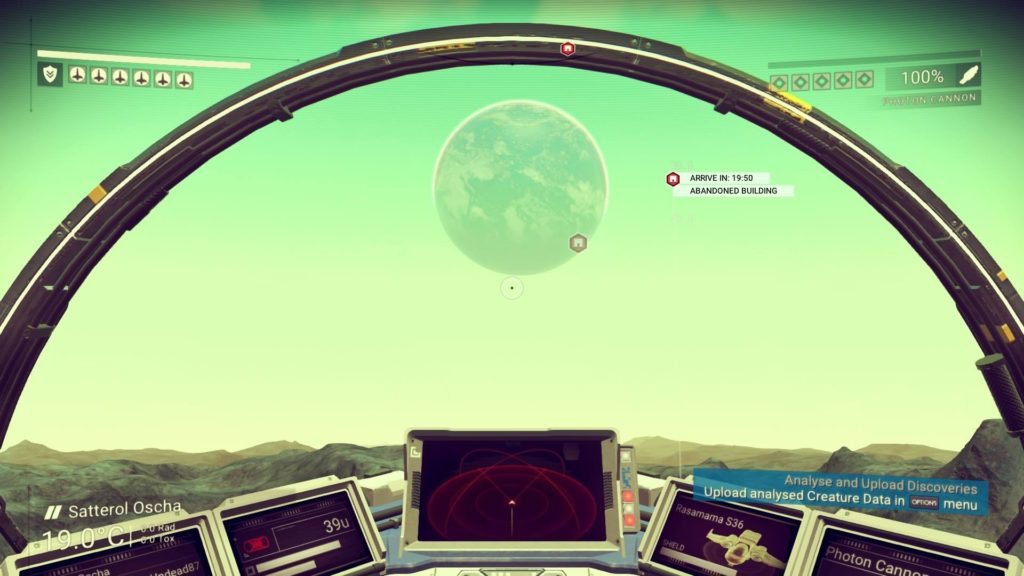 It may seem in this review that I am leaning towards the more negative side in my opinion, but I do really enjoy No Man’s Sky. Discovering new planets and the wildlife that inhabits these worlds is amazing, and space combat is pretty solid and works well with the arcade style flight controls. The survival elements work really well, especially if you are like me and don’t play those sorts of games. No Man’s Sky is a spectacle, every screen shot is like concept art for a 70s science fiction movie. If I had never played Elite, then I imagine I wouldn’t have as many negative points, but Elite just does things a lot better, especially while in space. Overall though, I am enjoying my experience in the galaxy Hello Games has created.