2016 has been a difficult year for the Caped Crusader, with his highly anticipated return to the big screen being universally panned by the critics (unfairly I must add), and the animated adaptation of the famed and much loved graphic novel The Killing Joke also met with a mixed reaction. There was also the delay to Return to Arkham, and when it was released the general opinion was that this was another pre-gen upgrade for the current generation that wasn’t entirely needed. Many Batman fans held hope though for the potential saviour of The Dark Knight in 2016, and no, I am not referring to the two-minute cameo in Suicide Squad, I am, of course, talking about Batman: The Telltale Series (Batman: TTS for the remainder of this review). Announced back at The Game Awards in December 2015, Batman: TTS was promised to have a similar mature tone like previous acclaimed Telltale games The Wolf Among Us and The Walking Dead. Telltale also announced that they would be completely upgrading their game engine to achieve a Greg Capullo/Neal Adams-inspired graphic novel look for the game. Everything was in place for an epic adventure with everyone’s favourite detective, and positivity was very high when the episode was first released in August. 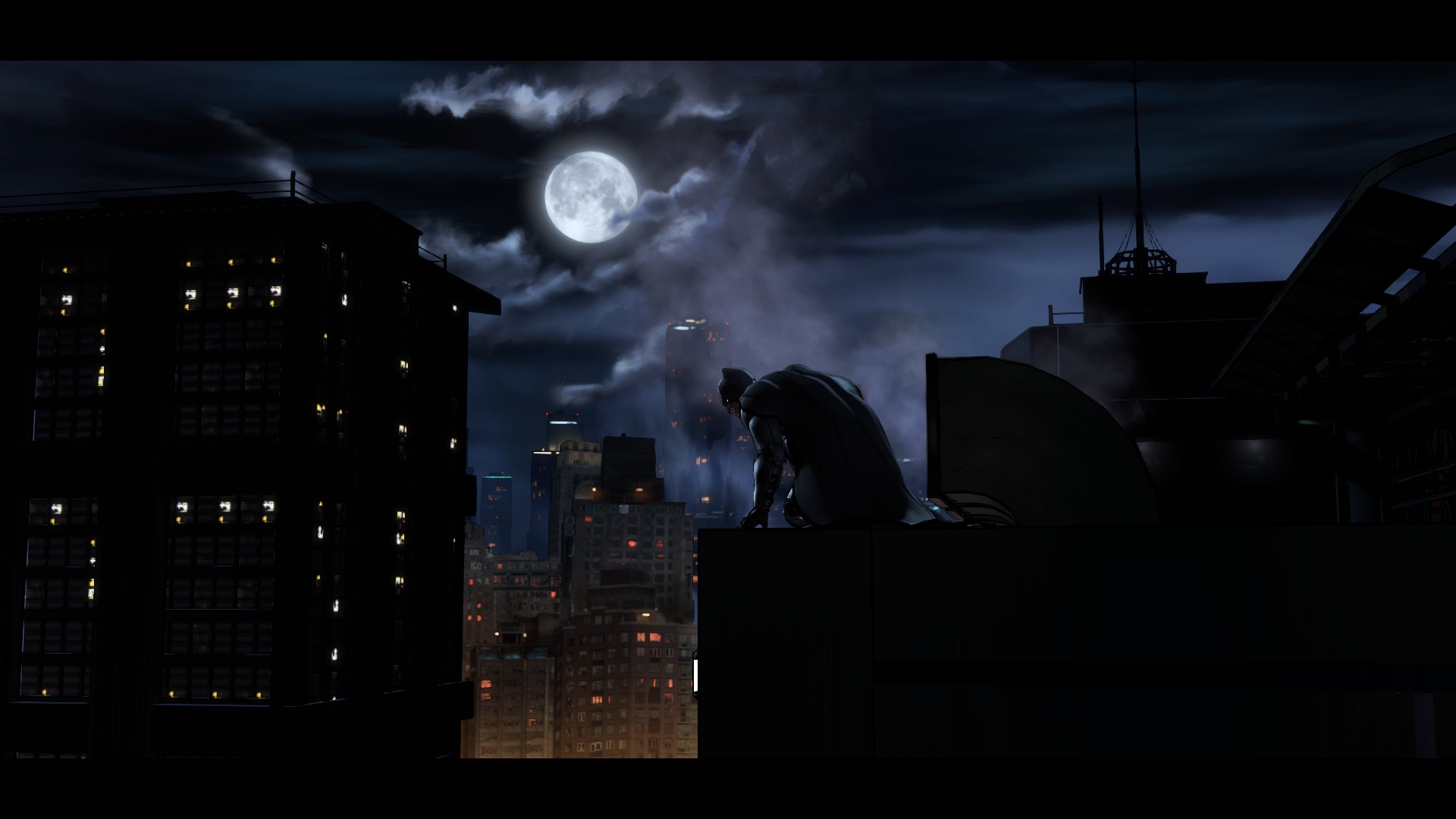 Point and click adventure games (there is more to this entry from Telltale, but point and click is the standard genre description) need to have an engaging story, because that is really all they have. There are plenty of examples of games that have average storylines but make up for them with incredible gameplay, such as the Battlefield campaign modes. They are generally quite generic and boring storylines, but the gameplay more than makes up for those shortcomings. Point and click games have to completely nail their storylines, and I am very happy to announce that Batman: TTS does this. I will be the first to admit I am not the biggest Batman fan (that title goes well and truly to my housemate), but he is my favourite ‘Superhero’. I have not read many of the comics (by not many, I mean I have read one graphic novel), but I have seen all of the films, the fantastic animated series from the 90s, and some of the animated movies, and Batman: TTS has a storyline which any movie, TV show or comic book would be proud of.

The storyline is an original story written by the team at Telltale and takes place a couple of years after Bruce Wayne first becomes Batman. This early incarnation of Batman is vital to the choices you can make as you craft your own Batman story. There is no previous narrative or compulsion to act in a certain way, meaning that you can turn Batman into a completely savage bastard. In true Telltale fashion, you can either act like Batman usually would, in a highly intimidating way, be a sort of nice Batman (but why would you want to do that!?) or, and this is what I did, turn him into a brutal, ass-kicking maniac. This was so much fun, there were times in the Arkham games where you can act in vicious ways, but nothing in comparison to what you can do in Batman: TTS. Very few games make me shout out ‘what the fudge’ loudly, but this one did, and not just on one occasion (but there is one choice you can make that is utterly barbaric). The story itself is completely engaging from start to finish, and not once did I find myself bored and just clicking to get through it. I really began to care about the characters around me, and when I was being my brutal self and upset someone, I actually did feel bad that I did. 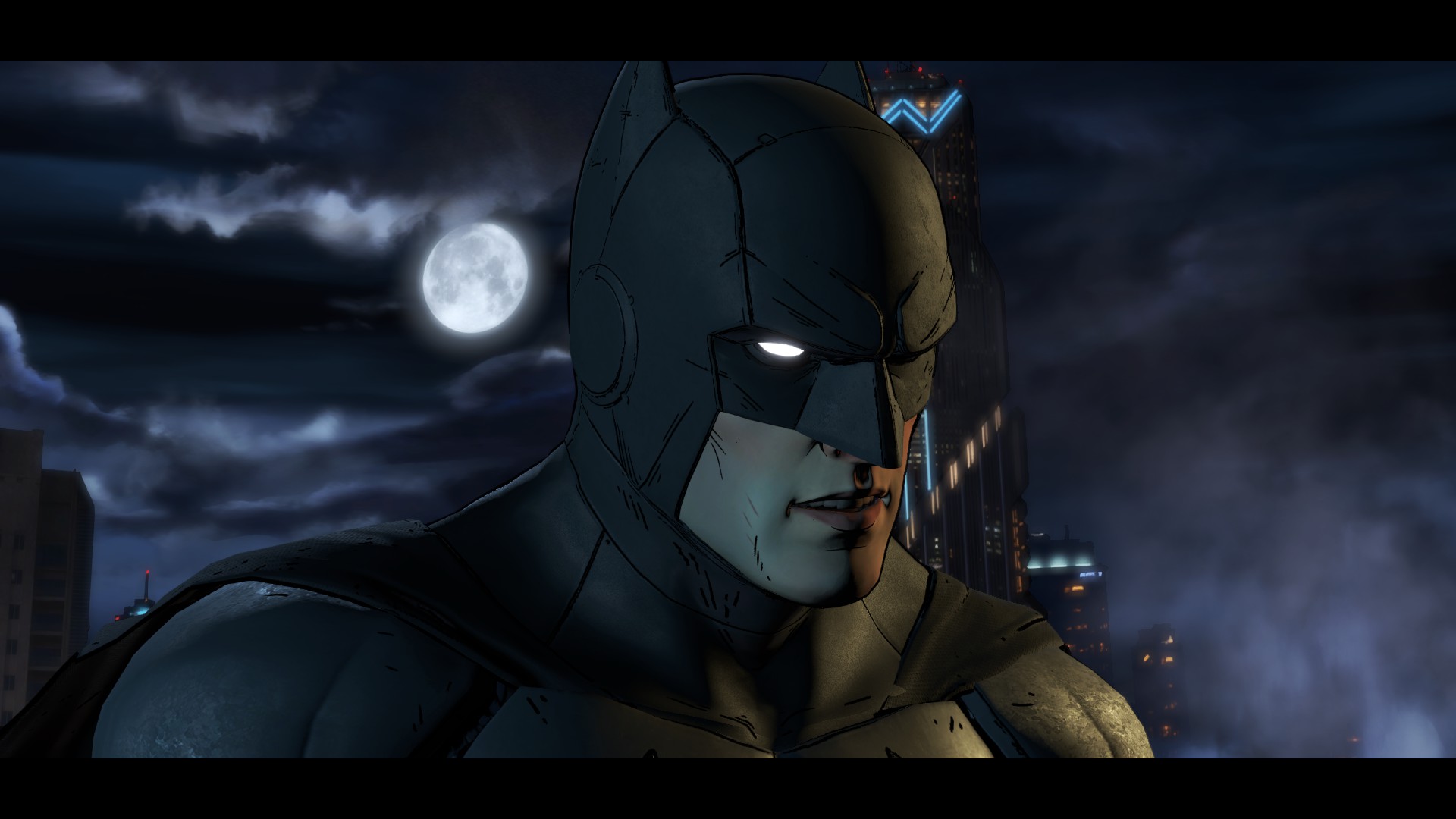 For the first time in Batman’s video game history, you will spend a substantial amount of your time playing as billionaire playboy Bruce Wayne, who is brought to life by voice acting royalty Troy Baker (Joel from The Last of Us and various Marvel and DC animated series, to name a few). Playing as Bruce Wayne is totally different to playing as Batman, which helps break up the choices and gameplay elements of Batman: TTS. Generally, Bruce Wayne’s parts are more dialogue orientated than Batman’s action sequences. Playing as Bruce Wayne I really found myself caring while watching his life spiral out of control around him, such as when he struggled to cope with the news about his parents (not going into detail here) and watching the reactions from characters when I made a particular choice they didn’t like. Choosing between friendship and love is a very, very difficult choice to make, which isn’t made easier by Telltale’s time limit to choose a reaction. I can understand why there is a time limit, as they are trying to make you act like you would in real life; however, I don’t know about you, but the choices I have to make as Batman or Bruce Wayne are a bit more full on than my usual choices of what pizza I should have for dinner tonight. I like the time limit feature, just give me a few more seconds, god dammit, Telltale! 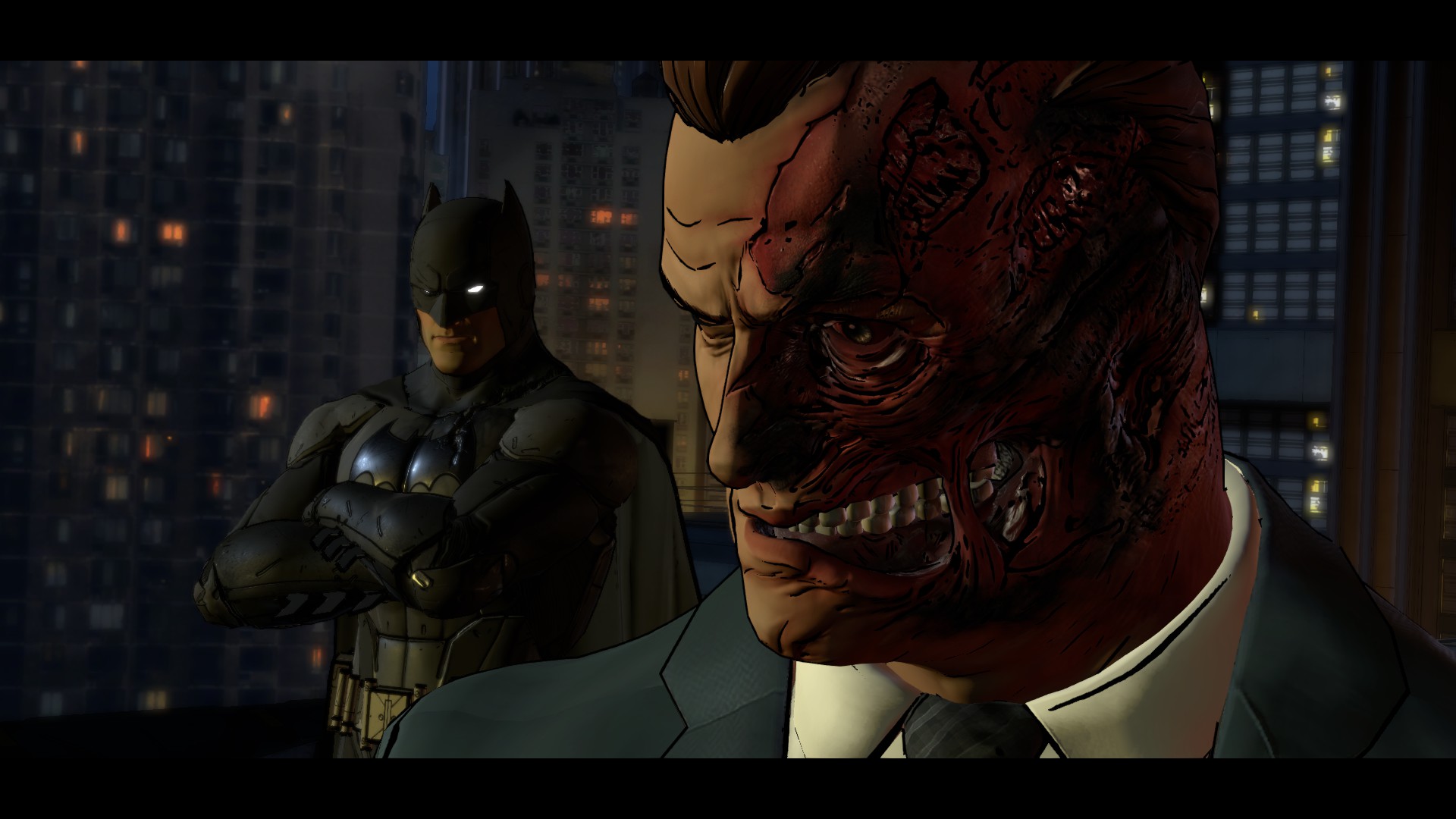 The action sequences as Batman work very well, but if you are thinking about playing on a PC with a keyboard, then I would say only do so if you are completely comfortable with where the ‘q’, ‘e’ and ‘shift’ keys are. I am more than comfortable using a keyboard, but there were a couple of blind panic moments where I miss-pressed a key or just missed the key completely. The combat works like it does in many of these games, with key/button prompts added in at random moments during the action. Another aspect that Telltale needed to get right for these actions sequences was Batman’s street fighting style of martial arts, Keysi, and again Telltale have completely nailed it. The fighting looks as brutal as ever with Batman using his environment to wonderfully violent means. Without the animated combat looking as good as it does, then this would have been a huge problem for Batman: TTS, but luckily it’s great. It is more suited to a controller than a keyboard, as there were times I had to very quickly switch from keys to the mouse, which usually isn’t a taxing problem, but I don’t usually only have about 5 seconds to throw a Batarang at an armed goon to save myself. Batman isn’t just an ass-kicking hero though, he is also the world’s greatest detective, and these skills will be put to the test in various parts of the game. The detective mode works a bit like the Arkham games, where you investigate random clues and try and link what happened (I suppose that is just detective work, in general). These parts in the game were fun but were not challenging in the slightest. Once you have found all the clues (only made difficult by the camera angle sometimes), it is very easy to link one thing to another. 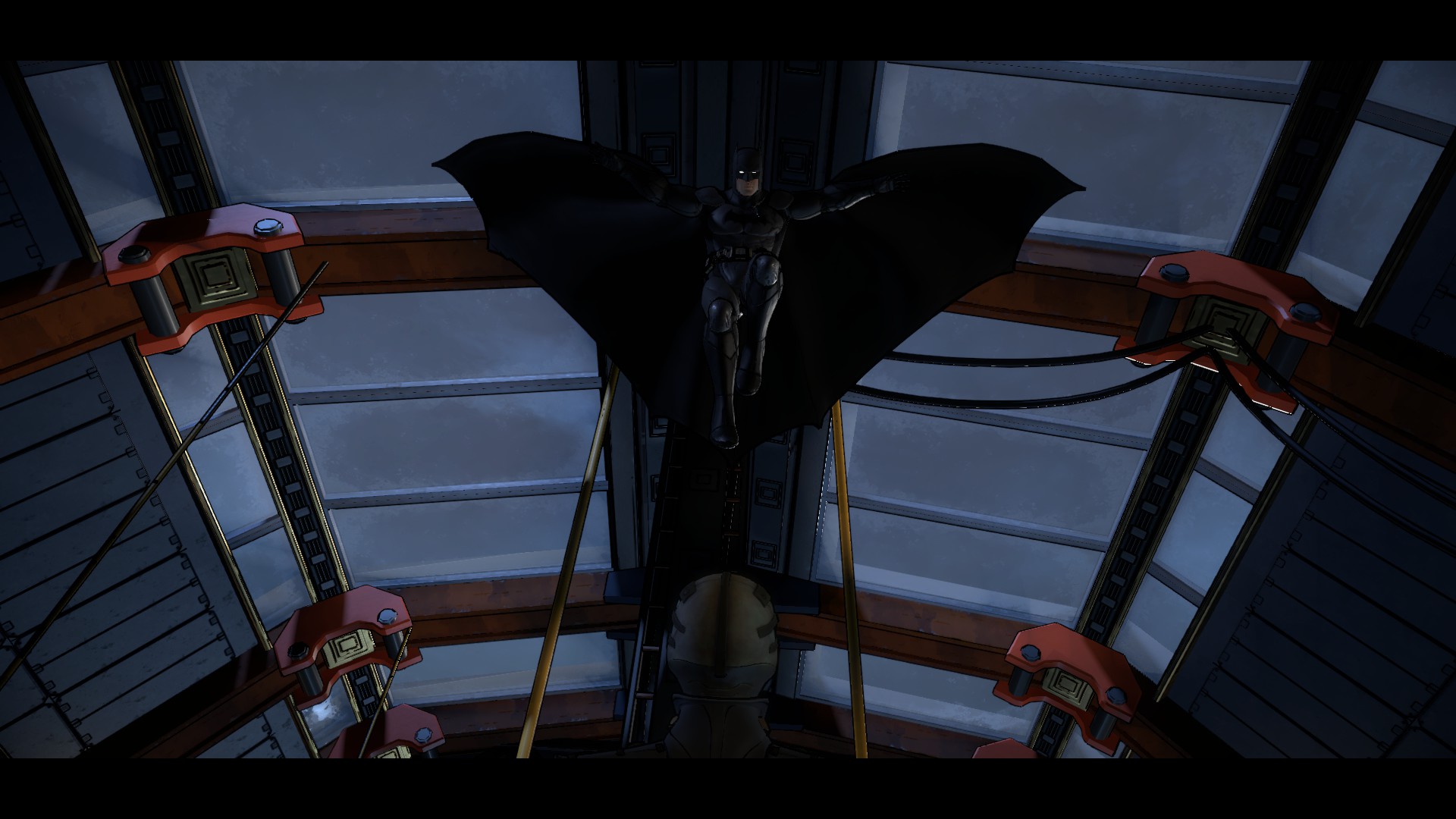 Batman: TTS looks amazing. The updated graphics engine Telltale had to implement for the comic book effect works extremely well; this really does look like an animated movie, most of the time. For how great Batman: TTS looks, there are a number of graphical issues. There were numerous times where the lip syncing was completely out of place and a couple of times was really noticeable. There are times as well when characters’ body parts contort in very weird ways. While I was on a bridge as Bruce Wayne talking to Harvey Dent, Bruce went full Exorcist and his neck was turned 180°. Also, when the characters are walking, their movements do not look as natural as they should, they just look really stiff and weird, but as a whole the game looks fantastic. I must have taken over 40 screenshots (some of which were rather good, if I do say so myself).

Telltale has also introduced a very interesting and brand new feature to Batman: TTS known as ‘crowd play’. With this turned on, an audience can participate in voting in the various decisions you have to make. This is done by the person(s) watching being given a special code to use on the Telltale website. The player will then see what their audience thinks they should do. Now, they can obviously choose to ignore this, but you can also activate a setting which automatically chooses the most popular option. This mode has seemingly been created for the huge popularity of streaming services like Twitch, and with a story as engaging as Batman: TTS, I can see this becoming a hugely popular stream on Twitch. 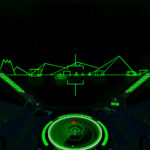 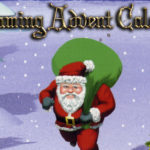