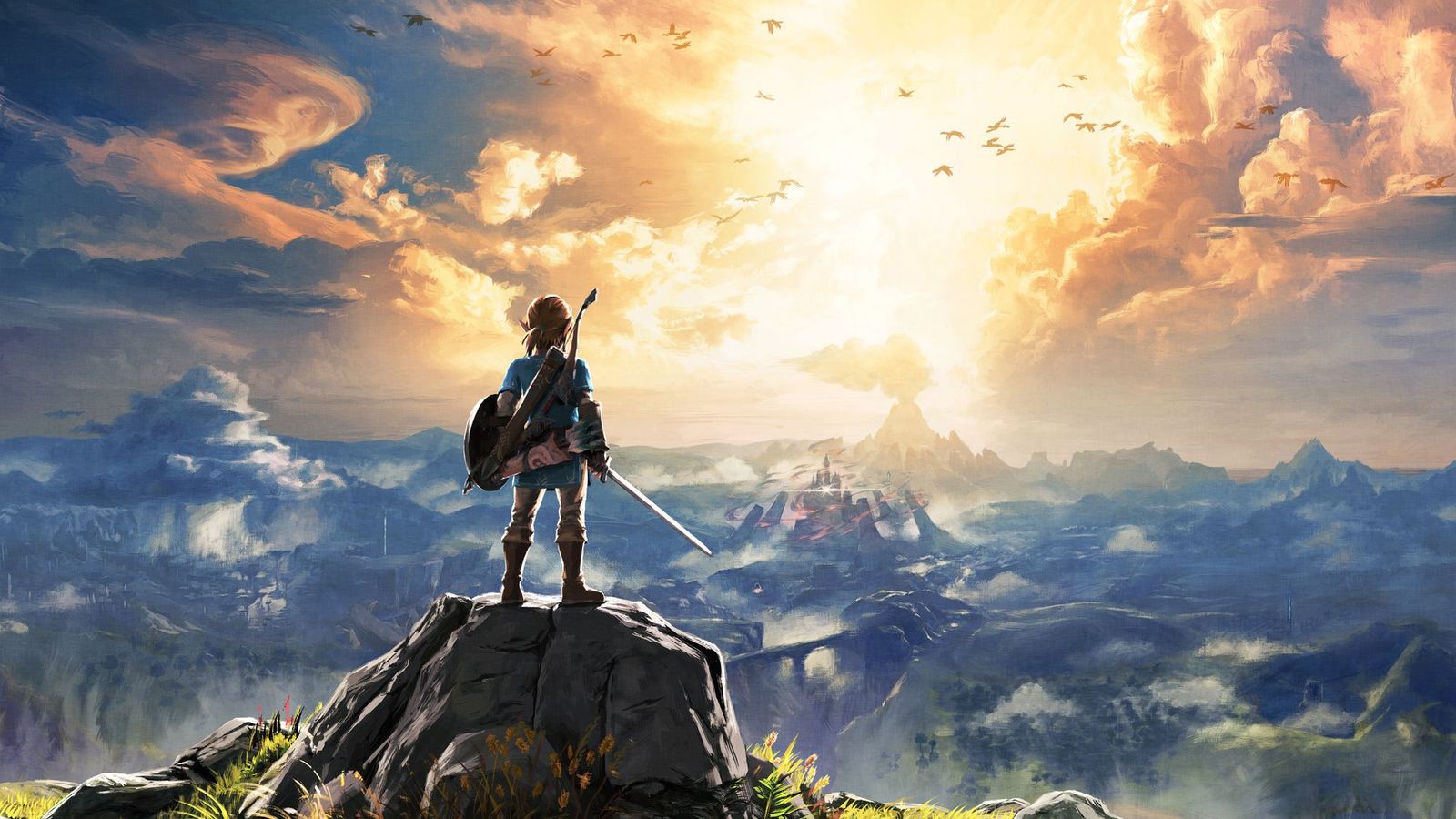 There’s no doubt that The Legend of Zelda: Breath of the Wild is Nintendo’s most ambitious game ever. The title started development with the intention of “rethinking the conventions of Zelda“, and Nintendo more than proved that that’s what they were going for upon the game’s first full gameplay reveal at E3 2016. A sprawling open-world with many survival mechanics and the biggest emphasis on exploration a Nintendo game has ever seen. To fans of more ‘structured’ 3D Zelda games, such as myself, the reveal of Breath of the Wild was quite jarring, in that the game intentionally tells the player to forget about structure and makes its story entirely optional. Of course, the game piqued my interest, as any main-series Zelda game would, but through all this time this Majora’s Mask worshiper would spend trying to enjoy the promotional material of the game, Breath of the Wild only seemed to differentiate itself more and more from almost every Zelda tradition. In the end, this ended up inevitably being the best decision Eiji Aonuma and his team could’ve made, because just as Ocarina of Time set the foundation for open-world games in 1998, Breath of the Wild does it again almost 20 years later in a time where the industry is in dire need of some renovation to our open-worlds. 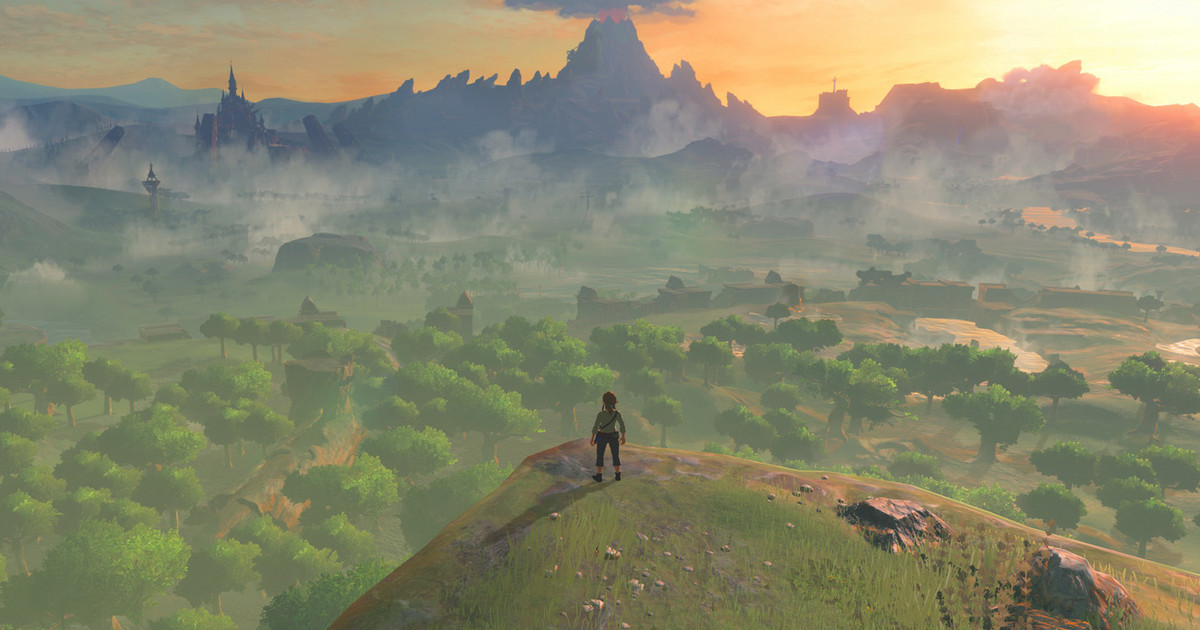 The game opens with Link awakening to Princess Zelda calling his name, introducing us to not only the inclusion of voice acting for the first time in a main series Zelda game, but also the first time you are unable to rename Link. Link then receives a new item known as a Shieka Slate, and then less than five minutes into the game, players find themselves exploring the massive open-world. The game isn’t without its introductory sequence, which is in the form of the entire Great Plateau section of the map. This will include exploring the Temple of Time where essential weapons, such as swords, shields, bows and arrows, can be found. Similarly to the very first The Legend of Zelda game for the NES, an old man soon greets Link and sends him off towards a Shrine, one of the most fresh additions to the game. The Shrines are essentially single rooms of dungeons from the previous games that reward players with a Spirit Orb upon completion, which can then be traded for a new heart-piece or additional stamina. The puzzles within these Shrines can range from incredibly easy to incredibly difficult, but should the player choose to they may leave and return at a later point in the game, depending on if they need additional weapons or items to proceed or if they’re just not in the mood. Though the game isn’t without its dungeons, the Shrines are one of the most welcome innovations to the series that Breath of the Wild introduces. They don’t lock the player in and halt their progress and ability to explore the open-world, but they do offer a ranging set of puzzles spanning over 120 unique Shrines that can be discovered across the world.

Once the player leaves The Great Plateau, the real fun begins. After climbing the area’s tower and acquiring a para-glider, the world is your oyster. The player can choose to either continue with the story or take their time and get used to their environment. For me, I chose the latter. Over 10 hours of it. I spent way too long getting used to the new mechanics, such as weapon stability, cooking, unlocking horse-riding and taking down enemy camps. At one point in my adventure, I dropped a bomb which I then noticed had rolled down toward an enemy camp, and I calmly allowed it to detonate, which then rewarded me with incredibly high level weapons for this particular point in the game. It’s stories like these that make Breath of the Wild so endearing as an open-world game in 2017, a time where large environments are just slapped onto every second new release. After the tutorial phase the game gives you complete freedom, again in the same vein as the NES classic, an intentional design choice whose intricacies more than help it pay off. Along with discovering enemy bases within the world, there are the previously mentioned Shrines and towers that reward the player with ability upgrades and uncover sections of the map. But to help unravel the story, Link must also visit certain places across the land to reclaim his memories. 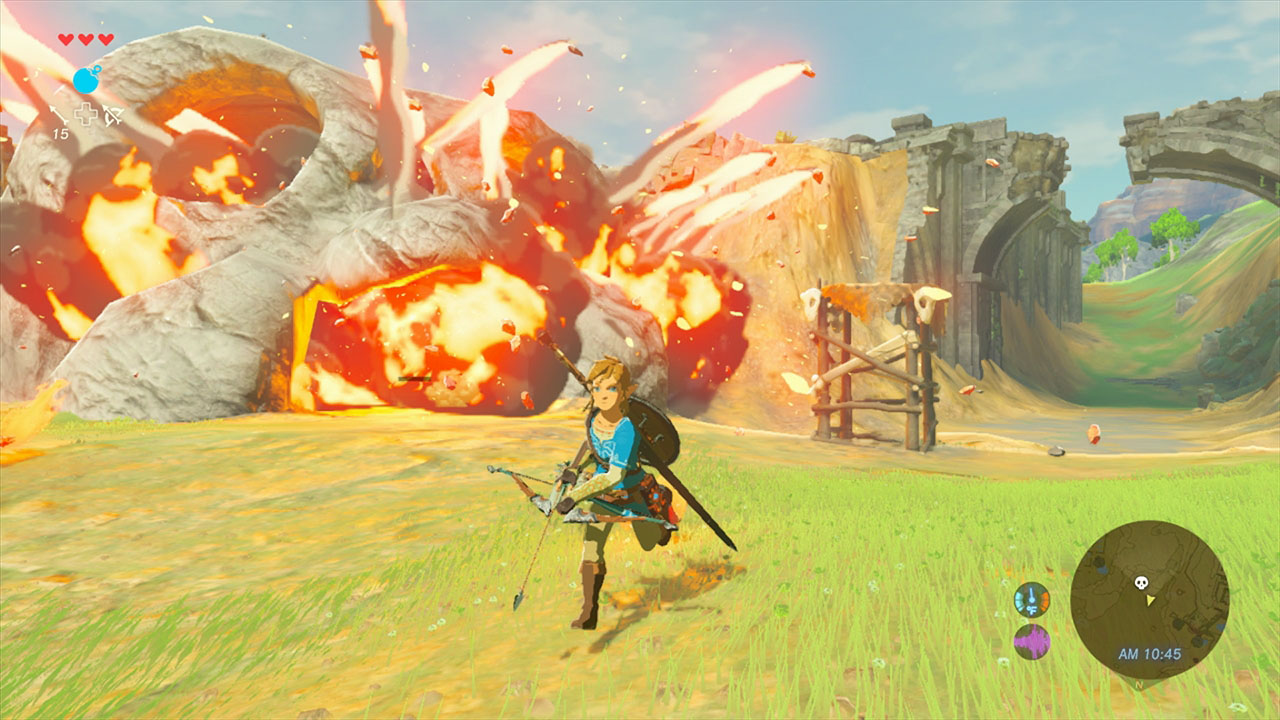 You see, Breath of the Wild also takes an interesting spin on the story of Zelda. As described earlier, the game begins with Link awakening to the princess calling his name and later discovers that he has been asleep for 100 years after being dangerously wounded in a battle against the great Calamity Ganon. Now suffering from amnesia, Link must uncover the truth that led to his slumber 100 years ago and finally face Calamity Ganon, who has been trapped in Hyrule Castle by Princess Zelda all this time. For the first time in a main series instalment, Breath of the Wild features fully animated in-game cutscenes with voice acting. These are spread thinly throughout the game as to not interrupt gameplay and lock the player into any specific story missions, and there are a few of them as the story progresses featuring a rather small voice cast, but as the introduction of voice acting to a series spanning thirty years, Nintendo’s localisation team have done a very impressive job of bringing good talent on-board, especially to add the first ever voice of Princess Zelda found in a Nintendo developed game (can we please forget that the CD-i games exist?). The story of Breath of the Wild offers a more traditional, simplistic look at the Legend of Zelda series, similar to something like Ocarina of Time or A Link to the Past. You won’t find some sort of thought-provoking, symbolic tale similar to Majora’s Mask here, but as a more traditional plot, Breath of the Wild knocks all of its competitors out, offering the most gripping and intriguing traditional Zelda story ever.

Yet another convention broken in this game falls within the weapons. In Breath of the Wild the player isn’t just given the infamous Master Sword after a series of dungeons or anything, instead the game entirely reworks the combat system of the previous entries by introducing weapon durability and the ability to use almost anything as a weapon, including enemies’ arms, leaves, branches, axes, pitchforks, and of course, swords. The catch is, of course, that these weapons will inevitably break over time as they are used, meaning the player must carefully supply their inventory with weapons as powerful as each other, should one break. It calls for some subconscious strategy to be made which isn’t just limited to swords, it also applies to bows and shields. The weapons do tend to break very easily at times though, and it can be rather frustrating when approaching a powerful enemy to have your equally powerful weapon break and have to flake your way through the fight. Another issue present in the game falls into something the Zelda series has had a problem with for a long time: the horse-riding controls. Instead of obtaining Epona as a part of the story, up to five wild horses can be tamed in Breath of the Wild, and they will grow closer to the player the longer the player uses them. They can even be left in stables across the map and can be retrieved from any of them. The controls for horse riding can be incredibly difficult at times though, similarly to Twilight Princess. The horses initially move at a slow pace, but speeding up can make turning impossible without stopping the horse entirely, all the while supporting tank controls. 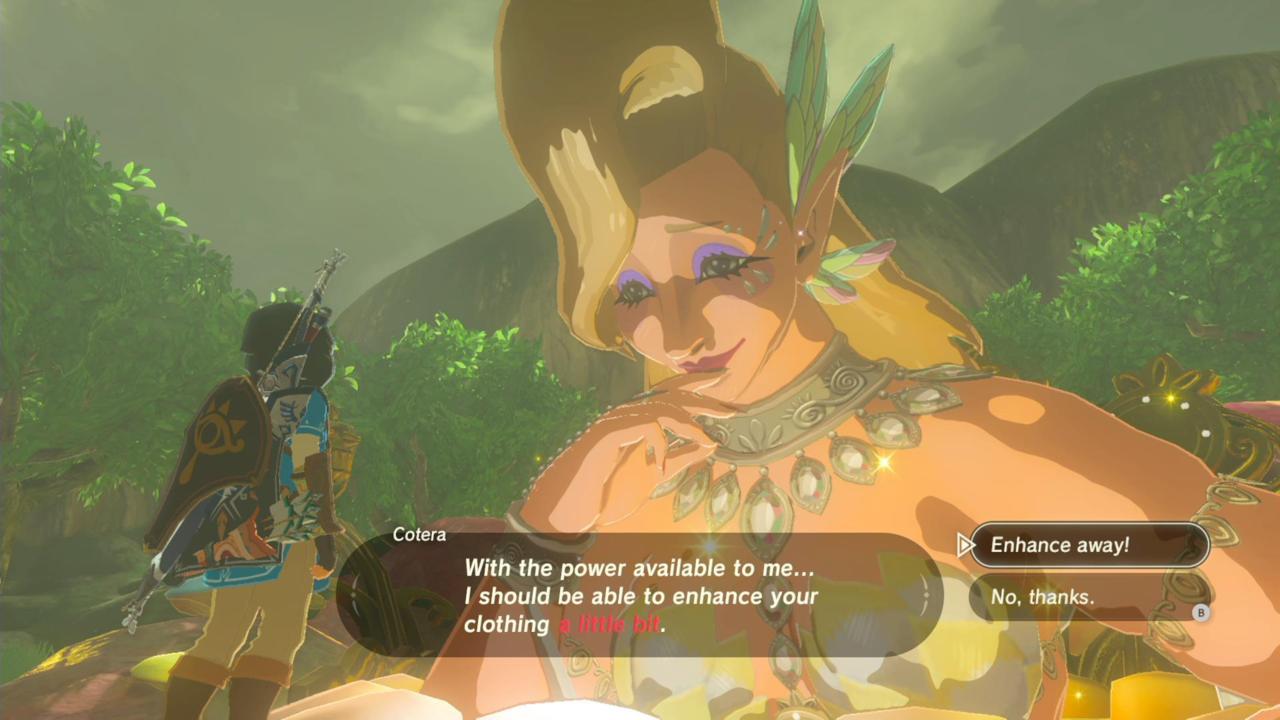 The visuals in Breath of the Wild are unconventionally, and I beg you to excuse the pun, breathtaking. The game has a gorgeous art style and overall design to it gleaming with charm and individuality, even to other Zelda games, that actually help mask the fact that the geometry of the game is actually rather harsh. Technically, compared to other games releasing nowadays, the game is obviously a last-gen game. After all, it is a Wii U game that happens to have a Nintendo Switch port. However, the art style is so beautiful that it allows the game to stand strongly against big budget releases on the PlayStation 4 and Xbox One, and this is coming from somebody who played the game on Wii U, where Breath of the Wild runs at a native 720p at all times.

The Nintendo Switch version also runs at 720p when used in handheld mode, but Nintendo have confirmed that as a result of this, the battery of the system will only last about 2 hours and 30 minutes. The game also runs at 900p when docked, but reports have indicated that there are random frame-rate drops not found in the handheld mode but that are comparative to the native Wii U version. On the Wii U the frame-rate can be quite loose, during exploration it runs at a solid 30 frames per second, quite impressive for an almost five year old system. Sadly, the Wii U shows its age when players find themselves in areas crowded by NPCs, such as towns, where the frame-rate can dip to the mid-teens or slightly above. Thankfully, the frame-rate drops were never enough to bring the game to a screeching halt, and there is footage online of similar instances occurring on the Nintendo Switch, so Wii U owners aren’t alone on these frame-rate dips. They are definitely never enough to drag the player screaming from their immersion, but they do bring you out of it for a bit. 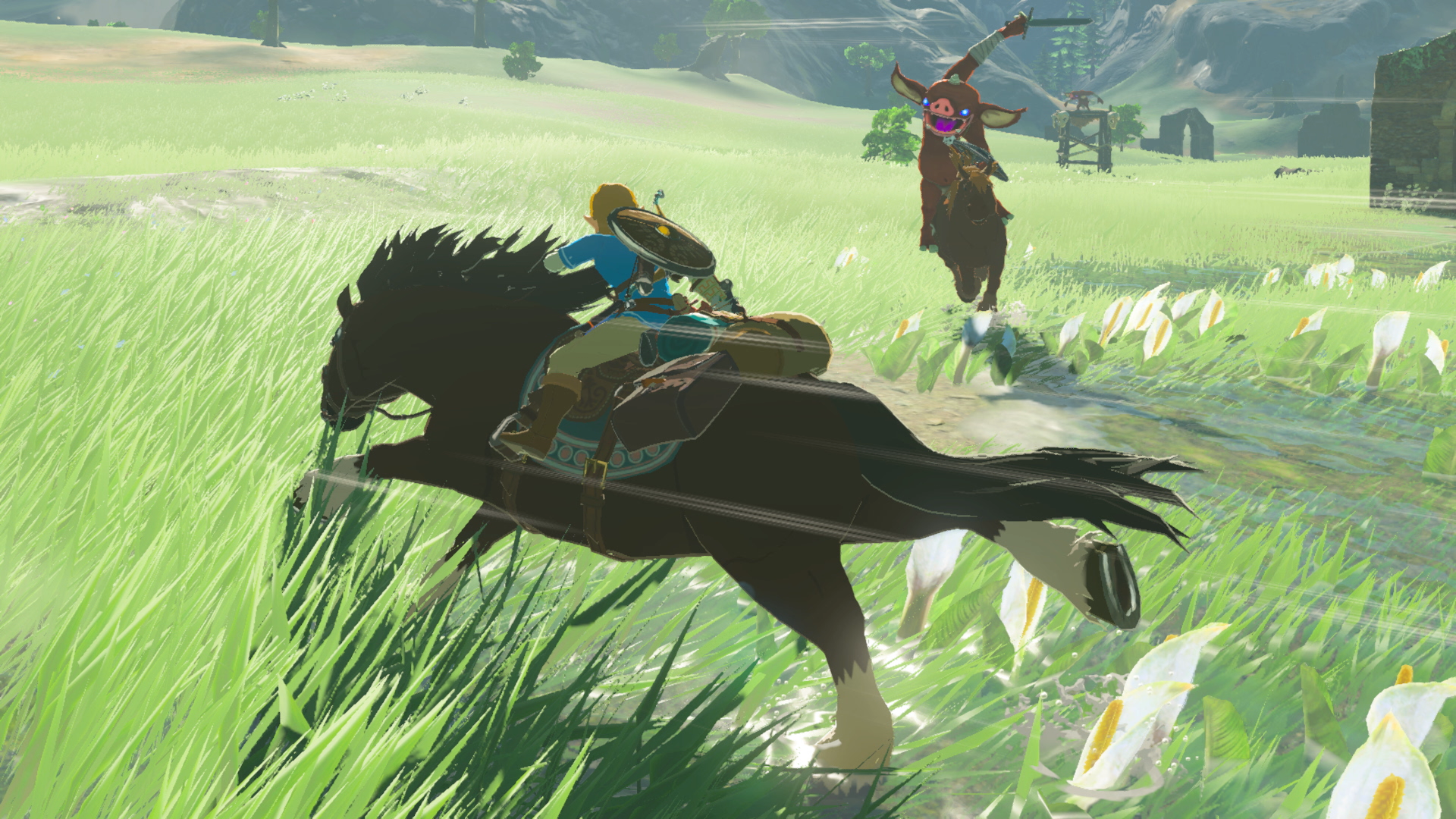 Technical short-comings aside though, The Legend of Zelda: Breath of the Wild is nothing less than a masterpiece. It brings Nintendo’s beloved thirty-year-old franchise into the modern day with incredible new mechanics, stellar voice acting and what is easily the best open-world I’ve had the pleasure of exploring in a video game. Its story breathes a level of intrigue and mystery never before seen in a Zelda game and displays Nintendo’s new admirable effort for innovation to the Legend of Zelda series. Breath of the Wild kicks convention to the curb and bravely reinvents (and in its own way improves) the entire series that many thought flawless to begin with. 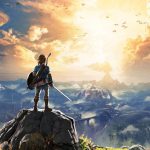 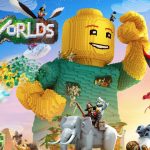 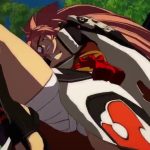