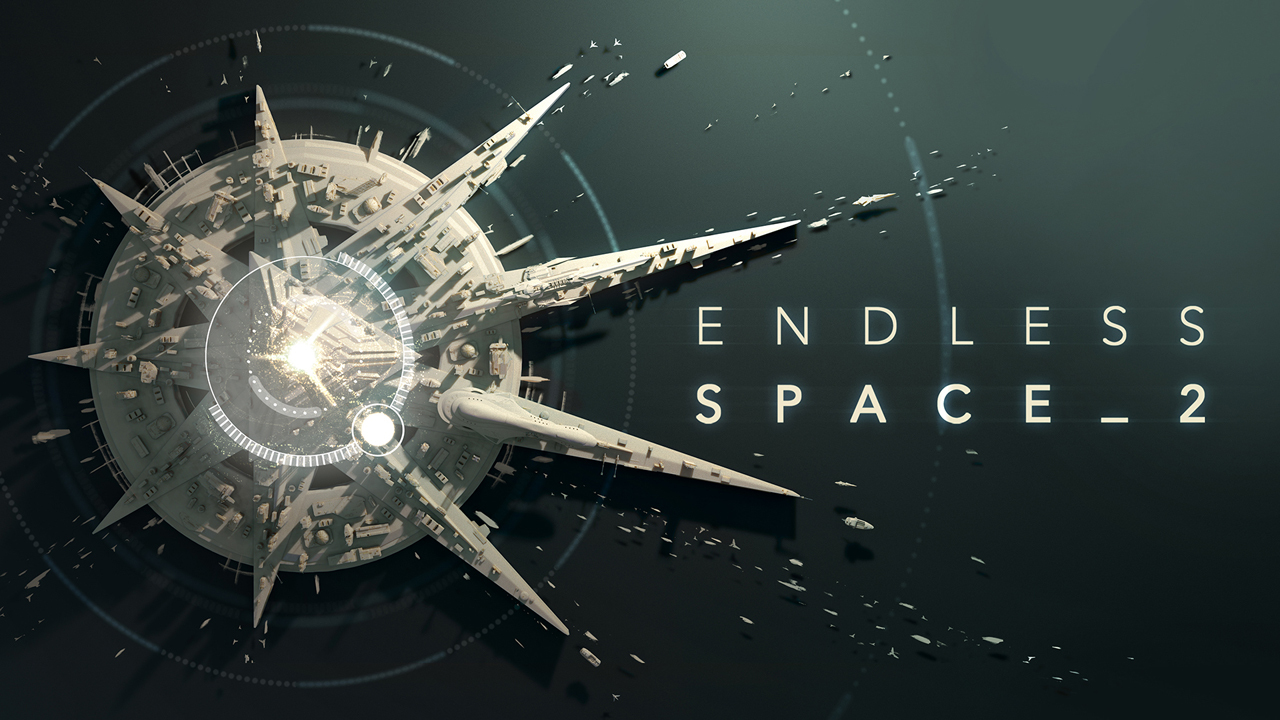 Any strategy fan can relate when it comes to 4x strategy games in that they tend to be the most addictive games out there. The term ‘Just one more turn’ springs to mind. With a vast market for 4x strategy games out there, like Civilization VI and Galactic Civilizations III, where does Endless Space 2 fit, and does it keep you satisfied and wanting more like it should? Let’s pop the hood on this 4x and see what runs underneath. Endless Space 2, developed by series veterans Amplitude Studios, has been fully released now after being on Early Access for close to 8 months.

In any 4x, there’s usually a multitude of races to choose from, and Endless Space 2 is no exception. What makes Endless Space 2 better is that there is no linear path to choose from when creating these races. Yes, there is the typical human race in there, but that’s where typical stuff stops. There are several unique alien races to choose from. In come the time bending robot refugees from a different universe, the Riftborn. The Unfallen are basically space trees. A clone nation devised around one mad man, the Horatio. All are just a fraction of the races mentioned. The whole game revolves around a mysterious resource called Dust and a mysterious race called the Endless. The backdrop to this game is astounding, and so much detail has been put into each faction. 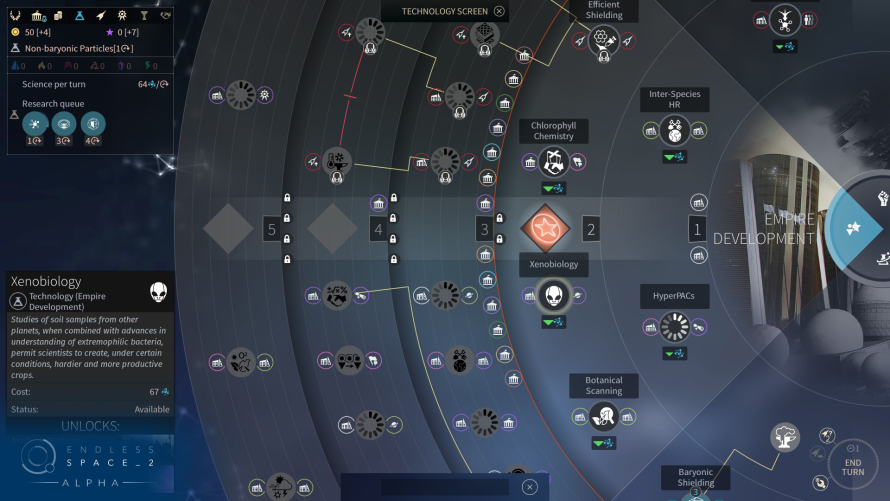 Like any 4x strategy, you start with a settler of sorts, a scout and a planet. Your first port of call is the technology tree as research is the most important aspect of any 4x. It’s the backbone of your civilization, and without it you will soon find yourself wiped from existence. With such an emphasis on technology and research, it’s important that Amplitude Studios got it right the first time. Each tree represents a different playstyle: Military, Economy, Industry and Exploration. As you can imagine, each path has its benefits and disadvantages. So it is up to you to decide what path to take. Presentation in any game is key, and Amplitude Studios did a great job of showing off their artistic style and great UI. They’ve also done a great job of setting the sci-fi dream alight, especially when it comes to settling down on an alien world or taking part in the massive intergalactic battles like in a scene from Star Wars. The different events that unfold as you explore the galaxy and uncover ancient beings and structures are shown through great cutscenes. 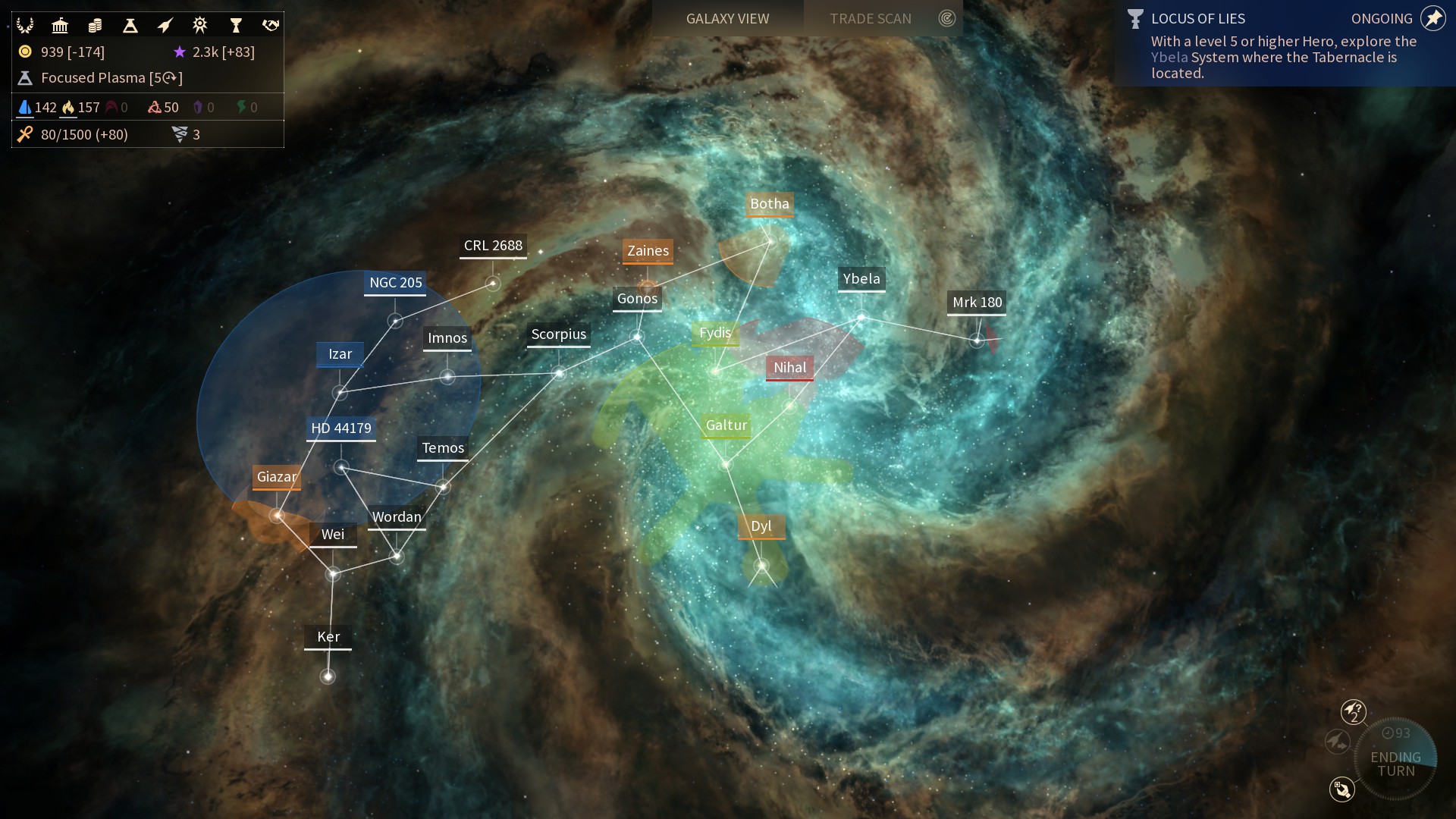 Each faction plays differently enough that not every playthrough is the same, which is key to any 4x. Like every other 4x, the base game falls down to managing resources, research and building epic fleets to essentially expand your empire through the rest of the galaxy. Each solar system is different, of course, housing many different planets for players to colonize. But not every planet can be colonized to begin with, certain planets require viable technology in order to be colonized, essentially driving you down certain tech trees and down a different path you wanted from the start. This is just your typical way to colonize a planet though, other races like the Unfallen colonize new worlds by extending their cosmic roots down the star lanes between worlds as long as other enemy factions don’t interrupt their growth. 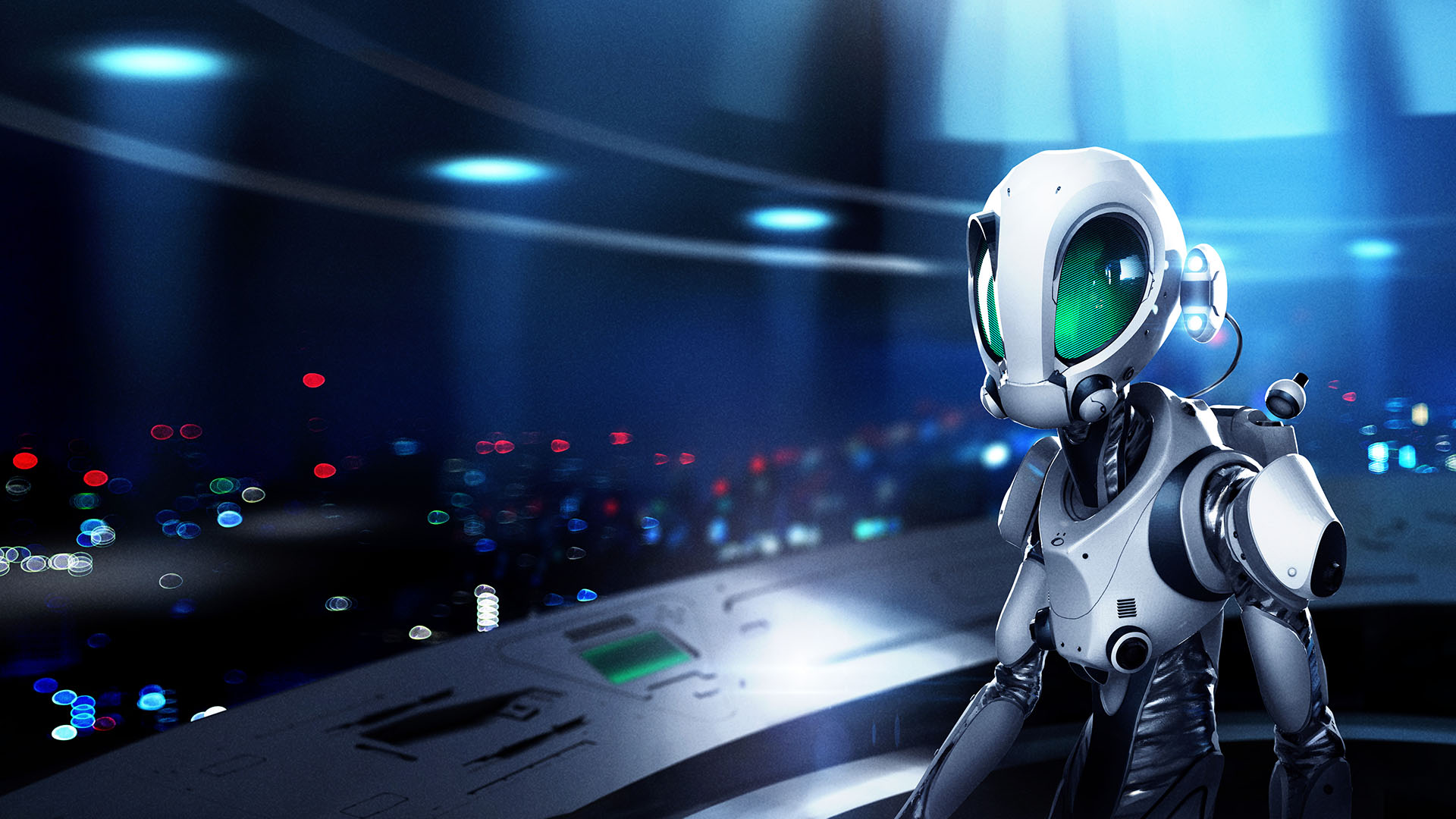 My first few initial playthroughs of the game were spent tirelessly trying to understand the tutorial that rarely ever made sense. Even though Endless Space 2 plays pretty much like every other 4x, it can sometimes fall down at certain hurdles. The initial start of any 4x is important as it sets the tone to the rest of the game, I find. For some reason, as beautiful as Endless Space 2 is, it just never drew me in. Heroes are a prime example of this. Normally, Hero characters are bold units that make a massive impact on how some games are played out. Heroes gain levels and can be assigned to a fleet or a planet, then that’s pretty much it. You don’t hear from them again until they level up. Heroes emerge from a space station called the Academy that is found in some random location on the galaxy map. The Academy is accessed during the plot, the game’s ‘missions’, if you will. Throughout the development of the plot, players eventually stumble across the Academy, and that’s it. I used my Hero units mainly as a booster for a colony, and then they were forgotten.

Another system that never really stood out for me was the political system. Every few turns or so, your faction votes for a political party: Military, Industrial, Science, etc. All these parties are influenced by your playstyle. Focus more on Science for your planets and research tree, then the Science party will have more of a breakthrough. Each party gives you access to different laws, and these laws act as buffs that can help a great deal. It wasn’t very hard for your chosen party to stay in power though, be they through fair means or foul.

Diplomacy in 4x games tends to be very meaningful; trade deals and alliances are generally formed through these means. Endless Space 2 falls extremely short when it comes to diplomacy. AI factions very rarely approach you for anything good, usually just to tell you you’re a nuisance and to declare war, which is a big shame, as interacting with other factions tends to be a big deal on the intergalactic stage. 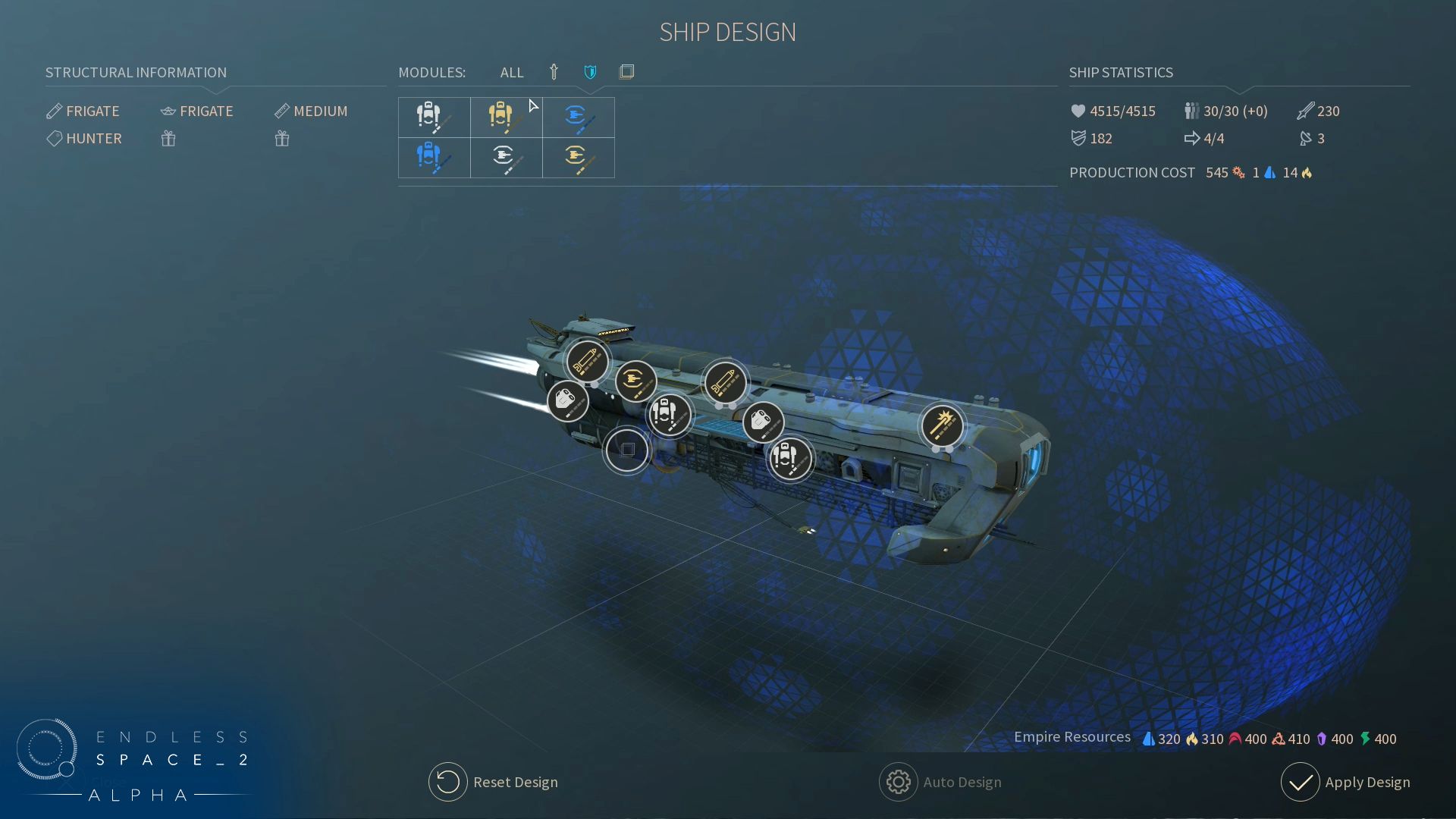 Combat is where Endless Space 2 picks up the slack though. Massive galactic fleets battling it out is never a bad thing, and Endless Space 2 delivers on that aspect. Players can customize their ships and rig them for short-range, medium-range and long-range, which is vital in the way you govern your tactics. Normally in a 4x, combat usually falls down to whose army is bigger; instead, players in Endless Space 2 can use different tactics to sway the combat towards their favor. Players can send their short-range ships into the thick of combat whilst their long-range destroyers deal damage from afar. Knowing your enemy is key to winning here, and building your fleet to counter your enemy is wise. 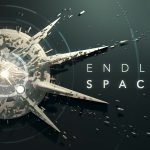 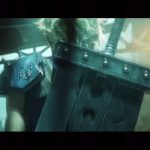 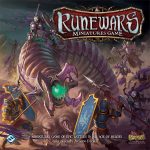