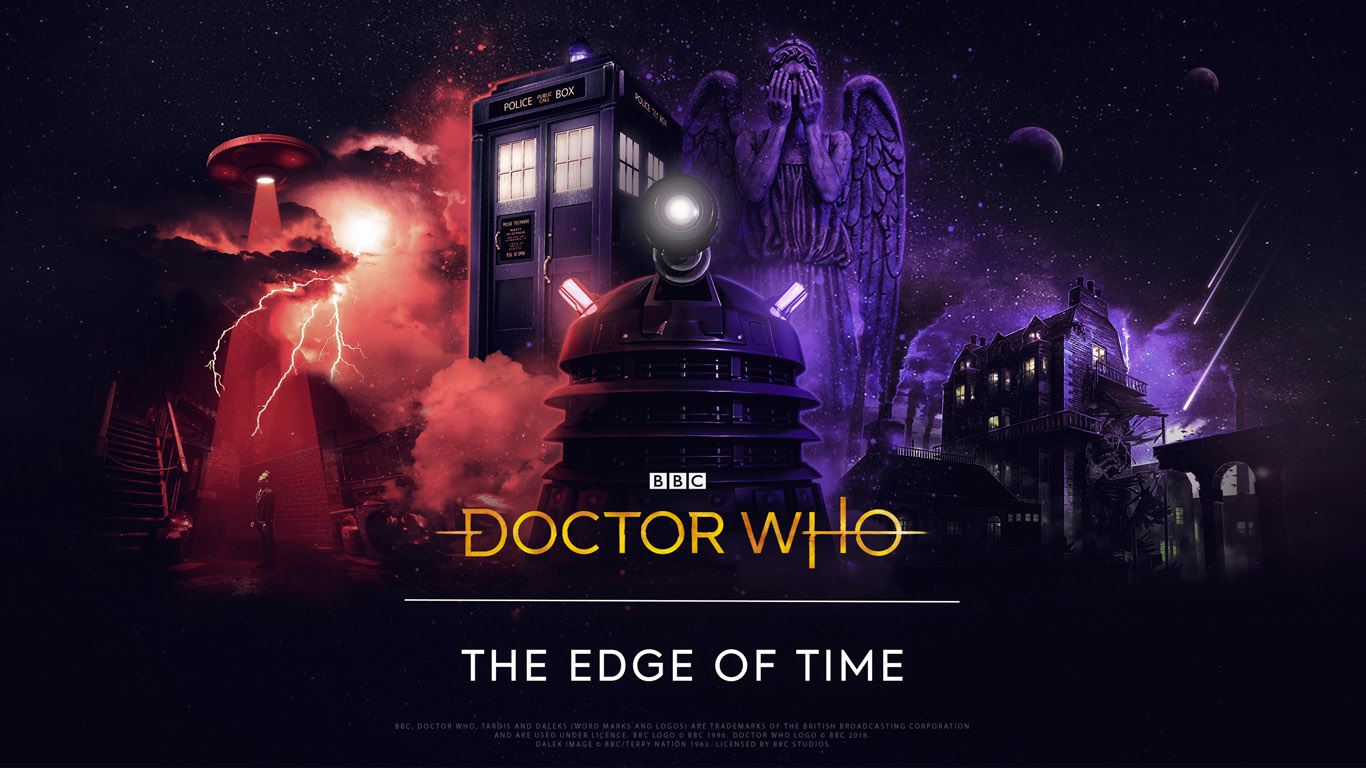 Doctor Who: The Edge of Time is the second virtual reality Doctor Who video game after Doctor Who: The Runaway. Whilst The Runaway is approximately thirteen minutes in length, The Edge of Time has a playtime between two and four hours. The game is a major release for developer Maze Theory and publisher PlayStack. Both of these companies are fairly small, predominantly working in London. Maze Theory was founded in early 2018, and PlayStack was founded in 2016. Social media advertisement by official Doctor Who channels was effective at reaching out to fans of the franchise. Progression of the game spans across five chapters with a linear story, and there is little opportunity to explore, though there are numerous Easter eggs throughout the game, either as objects in the environment or as part of dialogue. 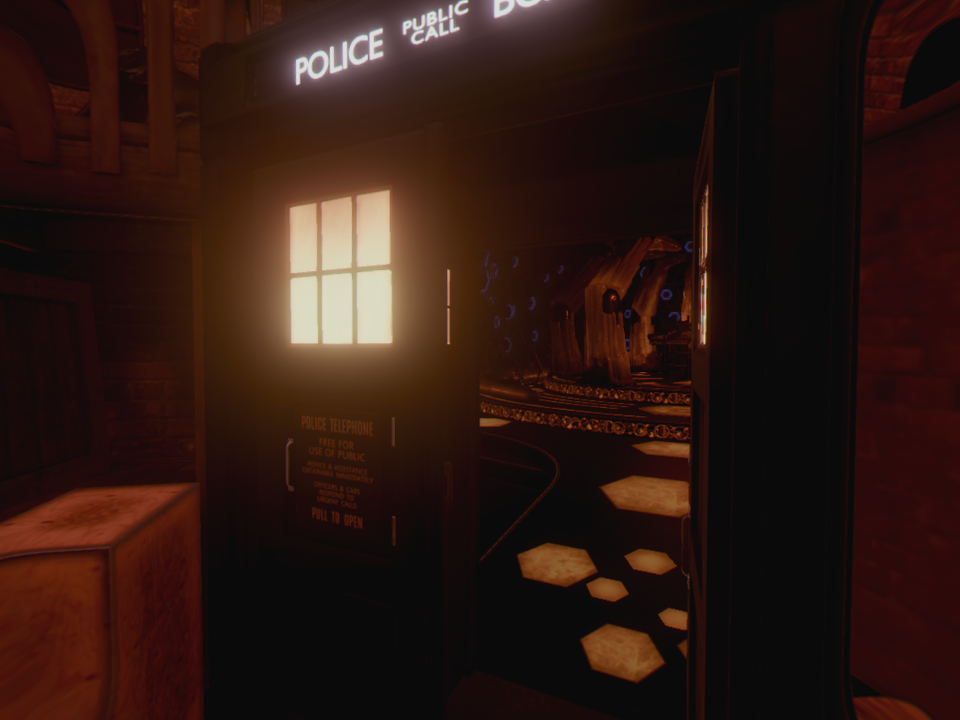 The Edge of Time starts with the protagonist entering a launderette. There is a static sound emanating from the television, then The Doctor, voiced by Jodie Whittaker, tries to reach out to them, explaining that the universe needs saving. A reality virus is messing with history and threatens all life. She explains that she is trapped and needs help.

Reality begins to distort, revealing and introducing the Hydrorks, who are now residing in some of the washing machines. Following The Doctor’s guidance, the protagonist escapes through the back of the launderette, finding the Sonic Screwdriver and building a device to allow the TARDIS to land. Upon entering the TARDIS, following some dialogue from The Doctor, the opening sequence plays.

After fixing the console, the TARDIS lands on an alien planet. A different character, Emer, guides the player through the dark forest full of creatures known as Tazmas that are scuttling around. A puzzle unlocks an elevator leading into the SS Lucia Minor, then the player later finds hibernating Zlysters, a species that feed off attention.

Chapter three brings the TARDIS to a ruined Victorian manor. The second time crystal lies under the guard of Weeping Angels, within Magnus Greel’s Time Cabinet. The player changes between two different time zones to solve the initial puzzles, proceeding to the catacombs to obtain the time crystal. 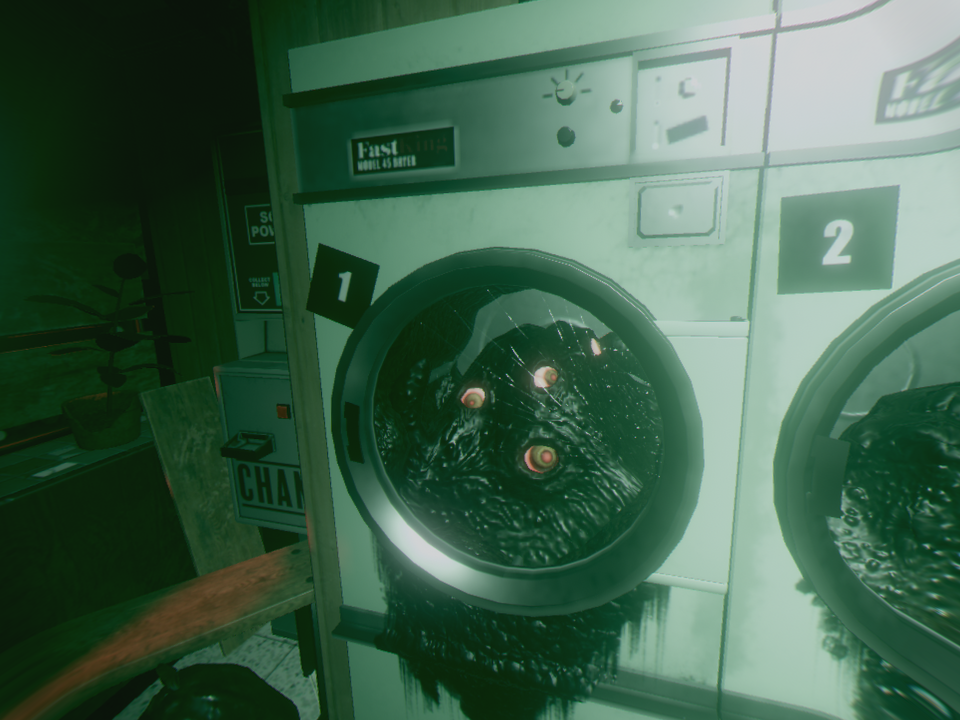 The game’s graphics are decent but aren’t top quality or exceptional, though the general aesthetics of the are strong. The proportion of lighting, colours, and shadow is appropriate to each scene. For example, the first view in chapter 3 overlooks a smoggy London cityscape. The interior of the mansion looks appropriately grey and decrepit compared to the clearer, tidy, and well-lit past version of the room. Lastly, the catacombs were dark, had minimal lighting, and felt spooky.

The Sonic Screwdriver looks accurate to the version from the show, down to details on the body of the screwdriver and the yellow lighting. Enemies from the TV show look accurate as well. Daleks retain the bronze/gold appearance as most Daleks throughout the modern series. The Weeping Angels include the standard appearances fans are familiar with but also include a single baby angel. The baby angel is hard to notice as it only appears once and as a vague silhouette behind the door that opens itself.

The TARDIS interior looks great and gives some better angles than the TV show gives. There’s even the custard cream dispenser. Unfortunately, a noticeable missing detail is that the small glowing-blue police box on the console doesn’t move at all, which it does in the show. The opening sequence looks great and is not too overwhelming for the senses, avoiding unnecessary nausea. The visuals of this opening are different from that of the TV show itself, showing the TARDIS flying through the series 11 Time Vortex. 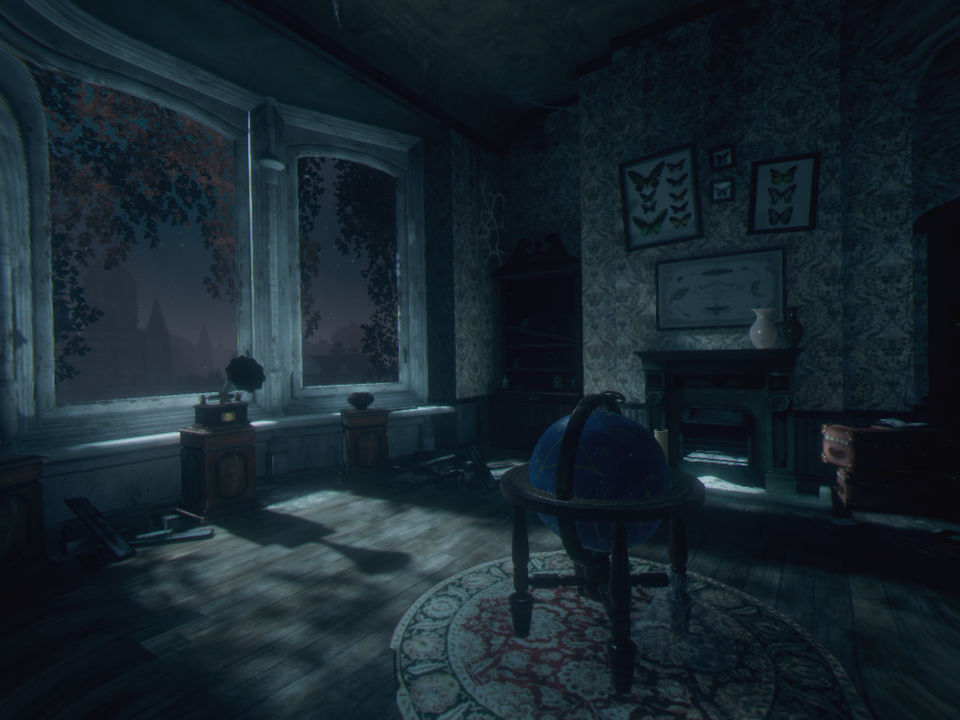 A quick summary of gameplay would be that it feels like a series of escape rooms. Most areas involve some sort of puzzle or tactic to progress or to sneak past enemies. The first three chapters are more puzzle-focused with spooky elements. Chapter four involves stealth mechanics, followed by combat (using a Dalek casing). The contrast of gameplay in this chapter makes it feel a little out of place next to the others; however, the stealth mechanics were a fitting solution for getting past the Daleks.

Change in gameplay and atmosphere plays better when treating the game as episodic, taking a break in between chapters. Gamers new to VR or more prone to motion sickness should take regular breaks regardless. Balance of gameplay versus dialogue scenes is good. There isn’t an excessive number of repetitive puzzles, and dialogue generally doesn’t drag on too much. Though there are lengthy periods of time where you’ll be listening to dialogue, bordered by 20-40-second long loading screens.

Emer or The Doctor chime in from time to time, dropping hints if the player is stuck on a puzzle. This helps to speed things up, though sometimes the gap between hints or commentary is a little short.

Replayability is not a strong point for this game, despite a direct reference to repeating the story at the end. This is largely due to the linear narrative and lack of exploration. Jump scares, whilst very strong initially, have less impact on future playthroughs. Chapter 3, at least, remains fun on later playthroughs. 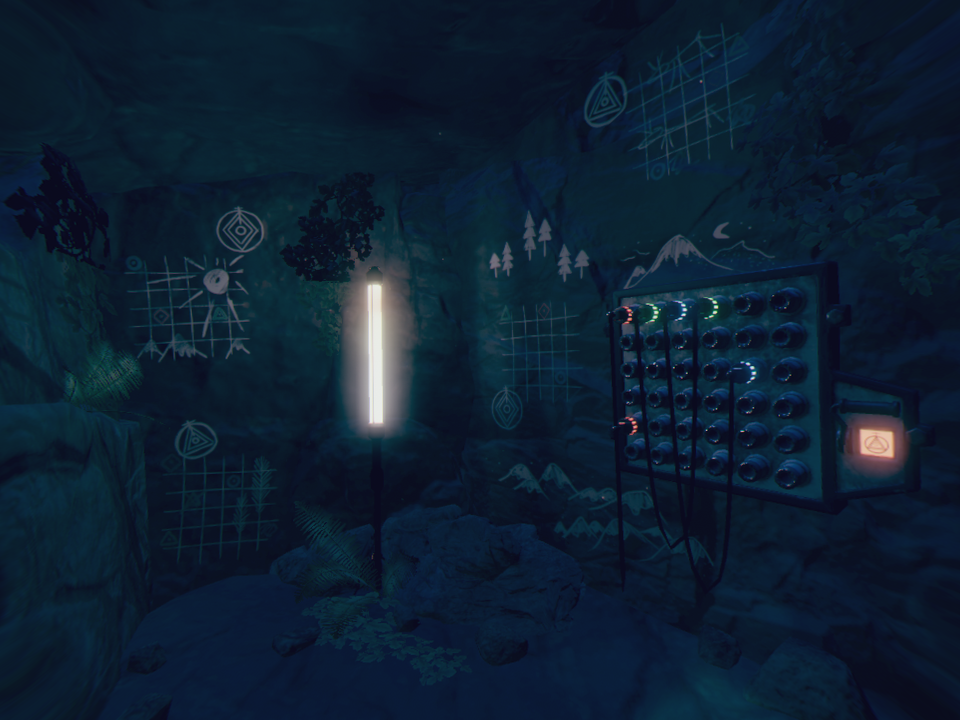 How Does It Fit in the Franchise?

Before going into detail about continuity and canon, the game is not listed as a valid source on the TARDIS Fandom Wiki. There remains more debate to determine The Edge of Time’s place in the series canon, if any. In this review of The Edge of Time, comparisons will be made to lore regardless.

As mentioned earlier in this review, the game contains numerous Easter eggs. References include both modern (2005 to present) and classic (1963 up to the 1996 movie) Doctor Who. One question is: Do any of the events in the game contradict canon? For the most part, they do not.

Excluding any events that, due to the plot, negate themselves, there was only one issue for me. The antagonist, The First, is described as being the first form of life in the universe and creator of all other life. In both classic and modern sources, there is mention of lifeforms that have existed before the universe. Examples include the Beast, the Guardians of Time, and the Solitract. However, lifeforms native to the universe do not have a definite origin, so upon reflection, The First may not be totally out of place.

The Easter eggs throughout the game were mostly a nice touch. A few I found to be a little out of place though, such as the bow tie and fez in chapter 3. Totter’s Yard, where the TARDIS lands in chapter 1, was a warming throwback to the origin of Doctor Who. Writers and developers did well to link to the franchise this way rather than focusing on the game in a way that risks contradicting lore. 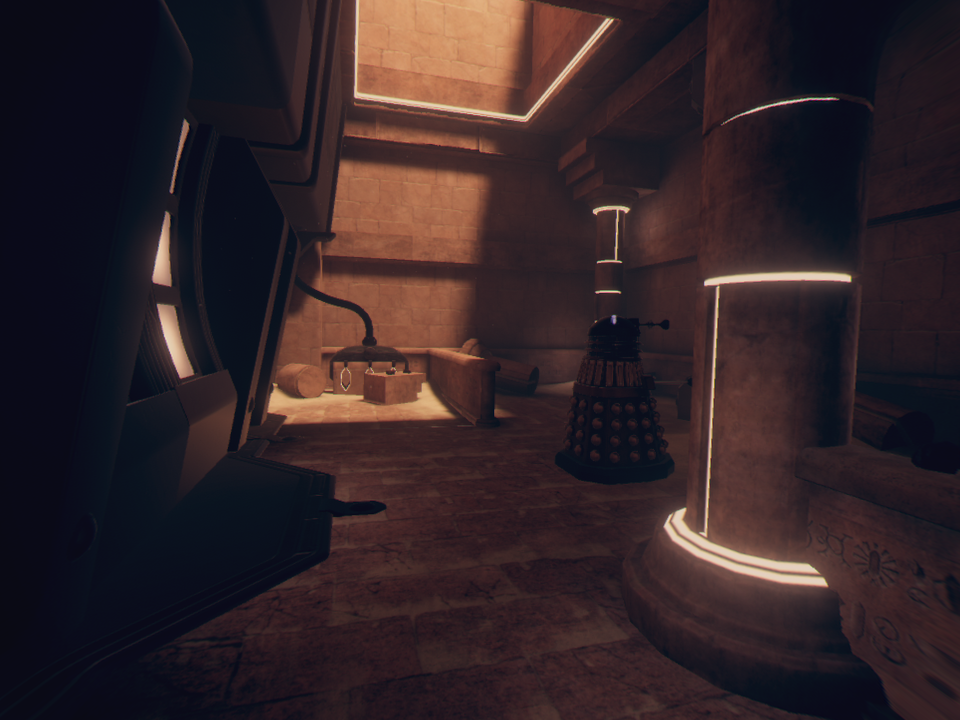 As somebody relatively new to virtual reality games, as well as a big fan of Doctor Who, I enjoyed this game. The controls, requiring hand/motion controllers, added to the immersion, though there is not a lot to interact with outside of puzzle objects. Being into both video games and Doctor Who, I hope to see more representation for the franchise in games. Maze Theory put a lot of effort into this game, and they did a good job with available resources.

It would be good to see Maze Theory or other games companies build upon the success of The Edge of Time and continue to develop games that fit in the Doctor Who universe. Big Finish Productions has been successful in creating an alternate medium for reaching out to fans in the form of audio productions.

Chapter three was my favourite part of the game. The puzzles were simple and easy to solve, and the atmosphere was highly appropriate. The jump-scares were well executed and not over-the-top. The Weeping Angels were a terrifying and threatening adversary in the game. Fans of the TV show will know the only way to survive a Weeping Angel: don’t blink. The behaviour of the Weeping Angels is accurate. During the catacombs section of the chapter, each angel can only move if all vision is lost on them; turning away for even a moment causes it to move closer. I was playing the game while in a Discord call with a friend, and they found my reactions amusing. I didn’t enjoy chapter four as much as the others. There did not seem to be much to do other than throwing rocks and later shooting Daleks.

Maze Theory have done a good job representing Doctor Who in this video game, and while there are flaws, they created a fun experience. The game is respectful towards the franchise and continuity, and it captures the feeling of it. Unfortunately, the lack of exploration and lack of enticing replayability count against The Edge of Time's quality as a video game. I would recommend the game to other fans of the TV show, individuals newer to virtual reality, and those looking for a short adventure game.

Do you agree with our review of Doctor Who: The Edge of Time? What are your thoughts? Tell us in the comments below. 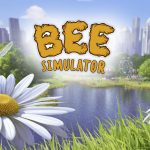 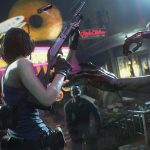