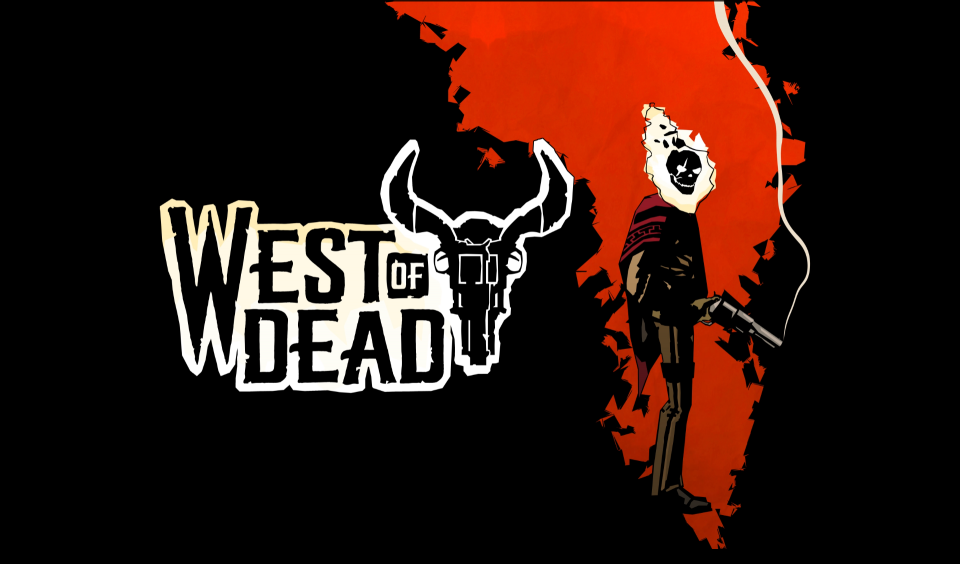 Update (29/06/20): Since the writing of this review, developer Upstream Arcade have addressed a number of issues in post-release patches. This includes resolutions to the below concerns relating to locking onto enemies and the cost of Sin item purchases— making West of Dead an even bigger recommendation than it was at time of release!

In West of Dead you play William Mason, a cowboy marshal with a poncho and a grisly attitude— oh, and he’s also dead, and his head is a flaming skull. Following suspiciously closely in the footsteps of lookalike Ghost Rider, Mason is enduring his own form of mortal limbo, constantly resurrecting in a battered old saloon with the singular goal of taking down his foes. Those foes come in the form of bandits and outlaws, as well as zombies, ogres and even a wendigo or two.

West of Dead is a twin stick shooter, with each of Mason’s two equipped weapons on a different trigger or mouse button. It is also a rogue-like, and whilst the shooting is fairly key to the gameplay, it’s this latter genre that really defines the game. Each of Mason’s purgatorial respawns constitutes a run, forcing you to restart the violent trek through West Of Dead’s procedurally-generated mazes. The environments are beautiful and atmospheric, from the dark eeriness of the mines to the dingy wet swamp, and each level is elevated by gorgeous cel-shaded visuals that provide the game with the overall look and vibe of a graphic novel. The use of lighting and shadow gives its labyrinthine corridors a sense of creeping horror— whether it’s your first run or your fifteenth, you never quite know what’s lurking in the shadows of the dimly lit passageways. 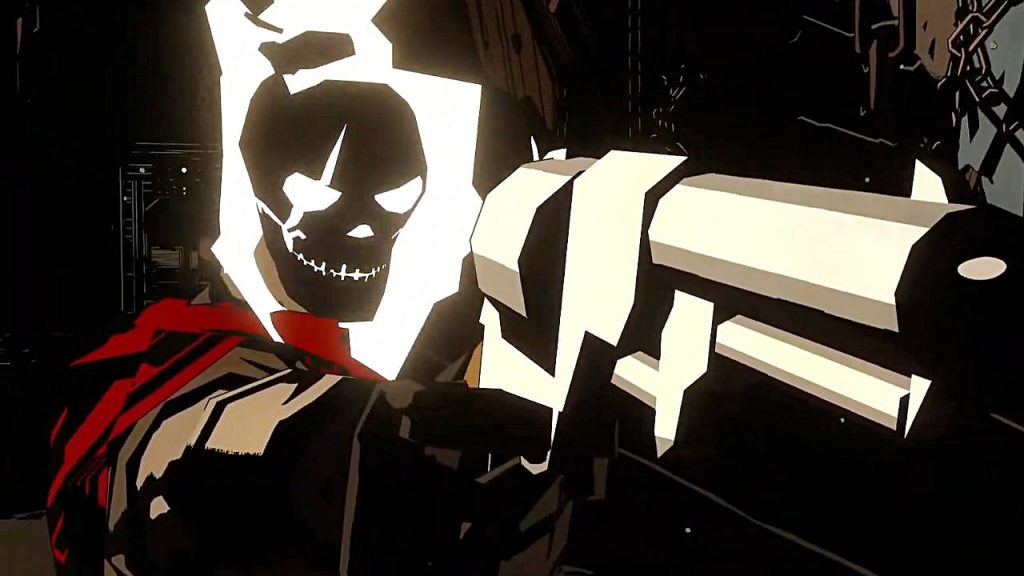 West of Dead oozes style and atmosphere, leaning heavily into its Wild West influences, from the character and weapon designs to the banjo-twanging soundtrack and the husky growls of voice actor Ron Perlman. If that name is familiar, it’s because he is the original Hellboy and also Clay Morrow from Sons of Anarchy. Perlman is excellent as William Mason, acting as the game’s narrator in a way that is reminiscent of Bastion, adding his two cents to every interaction you make.

Like many rogue-likes before it, West of Dead forces you to begin each respawn exactly as you began the last, from the very beginning of its labyrinth and with only beginner weapons. Being a shooter, weapons come in the form of firearms in three primary form: fast-firing pistols, close-range shotguns, or long-distance rifles. These three variations spawn a surprising number of variants, from pistols that freeze or poison to rifles that cause bleeding on hits. To complement your arsenal, levels are scattered with weapon upgrades, as well as abilities in a variety of forms. The traditional Wild West dynamite is always satisfying, but more utility abilities, such as shields, ice picks, or throwing axes, become essential in later levels. Combat can be challenging and frantic as you dodge and roll through hails of bullets and between points of cover, trying to control the long-range enemies taking shots at you whilst zombies or hellhounds come into uncomfortable melee range. Many of the combat rooms also contain lanterns that can be lit, revealing more of the shadowy corners but also momentarily stunning any enemies in the room. The stun mechanic provides a brief respite, and it can also be triggered by doing big damage to certain enemy types. This buys you valuable seconds to eliminate a dangerous target or to scramble into more advantageous cover. Crucially, without lighting areas with lanterns, it is difficult to aim at enemies. This becomes a key gameplay loop— can you reach the lantern without becoming a bullet piñata? 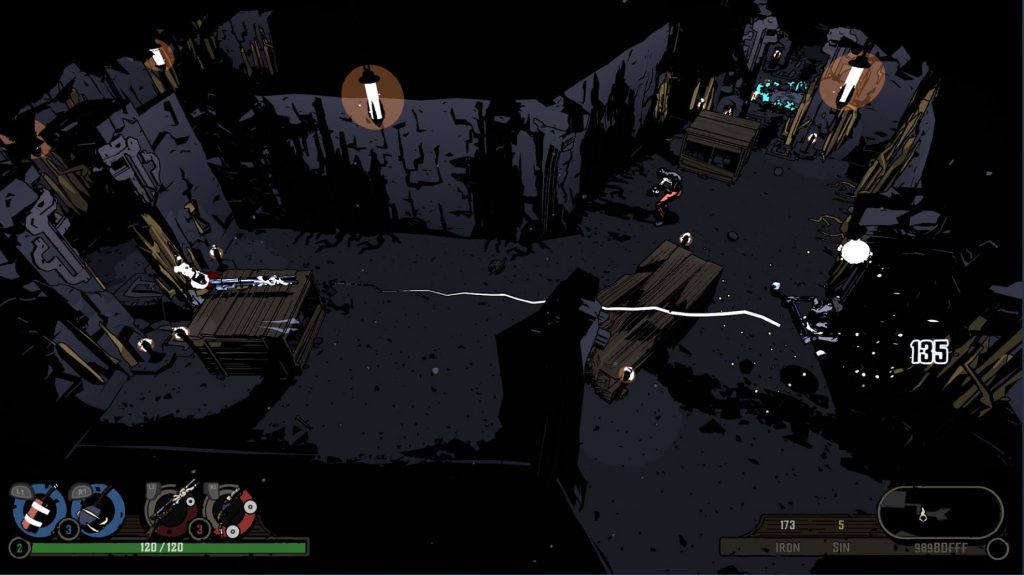 Cover is essential to surviving most of West of Dead’s challenges, but it can be destroyed if it takes enough damage. Surprisingly, it does respawn but rarely soon enough to be practically reused in combat. It’s important in the more challenging later levels to use these shelters wisely, adding a tactical level of play to the shooting mechanics. The twin-stick combat perfectly emulates the Wild West style of shooter, almost feeling like a quickdraw each time you aim your sights— flick the right stick in the direction of an enemy and pull the trigger to fire. Ammunition is unlimited, and automatic reloads refill empty guns, allowing you to focus on timing and aiming your shots. The game actively recommends playing with a control pad for this reason, but mouse and keyboard are fully supported options if playing on PC.

Unfortunately, there is no manual enemy lock-on. Instead, the game chooses to automatically lock onto the enemy you are aiming at— shown by a yellow indicator under their character models. However, this sometimes leads to the lock-on being stuck to an enemy you’re not actually trying to damage. This becomes especially true when melee opponents force you to backtrack out of rooms, sometimes leading to wild chases down corridors that break the immersion and the flow of combat. It’s hard to imagine this undead demon sheriff seeing two hellhounds and bolting out of the room firing bullets randomly into a wall behind him, but that’s unfortunately the reality in a number of encounters. A simpler solution might have been to lock you into all combat rooms (as occurs only with the boss fights), but this would have likely led to a lot of unfair deaths at the hands of surprisingly tanky melee enemies. I think with the options weighed up, I’d have preferred developer Upstream Arcade to dial back the melee units in favour of the more enjoyable ranged shootouts. Instead, this rare blemish tars otherwise excellent combat throughout.

Progression through West of Dead is where its rogue-like trappings become most evident, and its progression systems borrow heavily from other genre standouts. It will be particularly familiar to fans of Dead Cells. Through the process of room clearing, two main types of currency are unlocked— Iron and Sin. Iron can be spent at traders found throughout levels to unlock better weapons or abilities in addition to anything you’ve found during the run. These also include Charms, which provide passive buffs, such as regenerating lost health whilst in cover. As well as being available at traders, these items can also be found in chests around the maps. Any of the weapons or abilities found or bought for Iron are only applicable to the specific run you are on and will be lost upon death. Similarly, character upgrades are also temporary and can be found at shrines dotted around the maps. These shrines allow you to increase one of three stats— Toughness, which provides a buff to max health, Perception, which improves weapon damage, and Resourcefulness, which increases ability damage and recharge times. 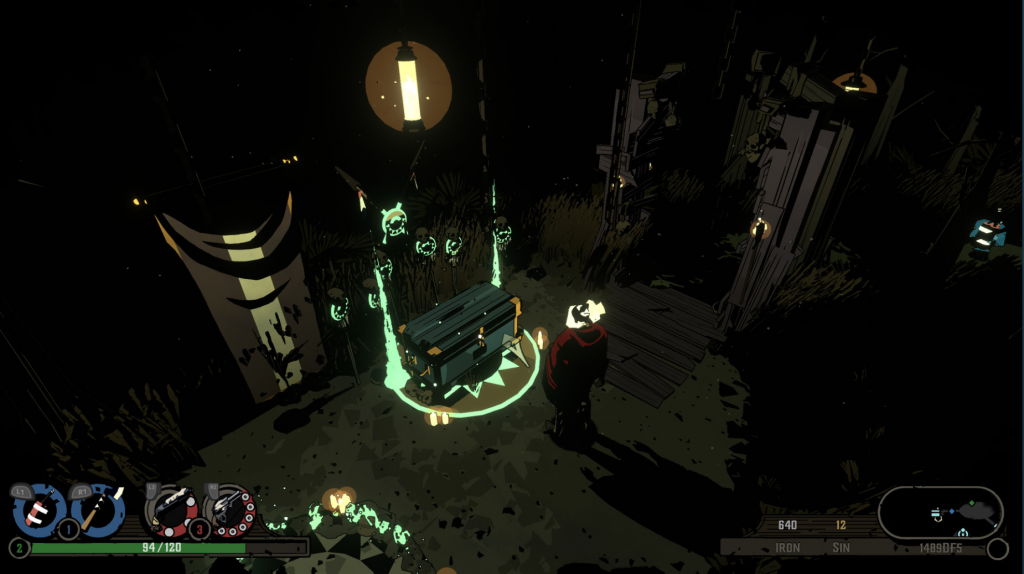 Sin is used for more permanent progression and can be spent with the witch who lives in the world between maps. Unburdening yourself of Sin with the witch unlocks improvements to your health flask but also a variety of new weapons and abilities. This not only grants you access to the unlocks for that specific run, but it also adds them to your game world as findable items for future runs. Practically speaking, most of these items will require multiple runs to acquire, and it’s these items that will make the biggest difference to your capability to make it further in each attempt. They seem a little too highly priced, facilitating a lot of runs to acquire even one new ability. This leads to the natural gating synonymous with the genre, and you will find yourself becoming very familiar with the earlier levels before unlocking the weapons and abilities that help you get to later areas.

Familiarity is always a concern when playing games in the rogue-like genre, and West of Dead isn’t entirely immune to this problem. Certain voice lines will begin to repeat to the point of ad nauseum, and some unskippable dialogue boxes from NPCs around the world will leave you bashing the B button to escape. Sadly, the NPCs aren’t fully voiced, leaving Perlman as the sole voice in Mason’s hellscape. Given the excellent use of atmosphere and ambiance elsewhere in the game, it’s a real shame we don’t get to hear the snake oil drawl of the trader or the insidious droning of the witch.

The thrilling gunplay helps ease some of the concerns of repetition. Repeating levels doesn’t detract from the sheer enjoyment of lighting up a room with a hail of gunfire, sliding across half-opened coffins like a macabre Jason Statham. In addition, West of Dead employs a quick travel mechanic later in the game that make early levels much easier to move around in or skip entirely. The Wild West wouldn’t be the Wild West without bounties, and these are also added after the conclusion of the first chapter to add some extra variety. Outlaws appear as additional side bosses to be hunted down, and combat against them is some of the most enjoyable in the entire game. Unlike other enemies and area bosses, Outlaws fight exactly as you do. This includes using the cover and dodging, throwing projectiles and fleeing around the map when in danger. More than any other moments in West of Dead, the Outlaw battles feel like true Western shootouts. 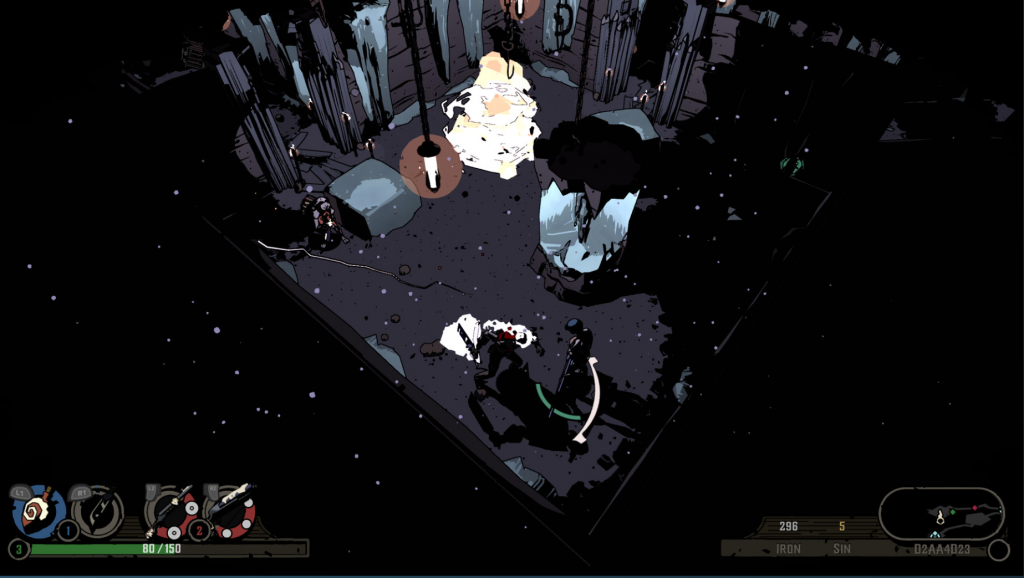 Outlaws also come with some small amounts of lore, again narrated by Ron Perlman. From a story perspective, West of Dead is minimalist. This is a simple story of a vengeance-seeking spirit looking to do harm to those who harmed him. From a narrative standpoint, there’s not a lot going on here, another trapping of the genre, but West of Dead makes up for that with style in spades. It beautifully captures the Western motif and aesthetic through well-written dialogue and narration. A long, compelling story isn’t what this game is setting out to provide though. Its focus is on a pure gameplay experience, with the replayability and addictive qualities that make rogue-likes keep you coming back for one more run. West of Dead achieves exactly that, making each run coercive through slick gunplay and a compelling progression system.

West of Dead is a unique voice in an overcrowded genre and offers twists on tried and tested mechanics and a fresh take with its own style and innovations. Some minor setbacks in combat and repetition aren’t enough to detract from an engaging and fulfilling experience— the hardest thing about writing this review was resisting the urge to jump back on West of Dead for another run. 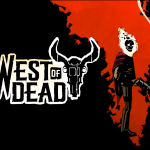 Gaming Respawn’s copy of West of Dead was supplied by the publisher. 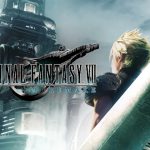 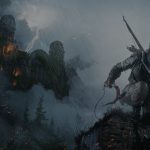