The easiest and fastest way to describe Salt and Sanctuary to someone would be to call it a 2D Dark Souls game. Now that isn’t a bad thing by any means, games influence other games all the time, for better or worse. But trying to replicate a Dark Souls game in 2D form to a very high standard not only sounds daunting, but seems nigh impossible for an Indie game developer. Well, Ska Studios have not only taken inspiration from the Souls game series, but they’ve shown it a vast amount of respect and created their own game full of personality, and most importantly, its own identity. The most impressive thing is the fact that Ska Studios, a team that consists of only two people, James and Michelle, have created a game that even FromSoftware would be proud to call their own.

The influence that the Souls games have on Salt and Sanctuary is very clear from the start and runs though the game all the way throughout. You start off the game like most RPGs, in the character customization screen. It’s not the deepest customization your likely to see, but it does the job. You choose your face, hairstyle, and the origin of your character, but the most important part is choosing your starting class, this will determine the starting equipment and what skills from the enormous skill tree the player begins the game with. There are a total of six classes to choose from, such as Knight, Mage, Hunter, as well as more. It’s very important that you pick the right class to suit your play style, but disappointingly the game doesn’t offer the player any detailed information on each class, for example, “what the hell is the Chef class supposed to do?”, so you have to pick a character and hope for the best and if it doesn’t work out, rearrange your stats and skills as you level up or start over again. 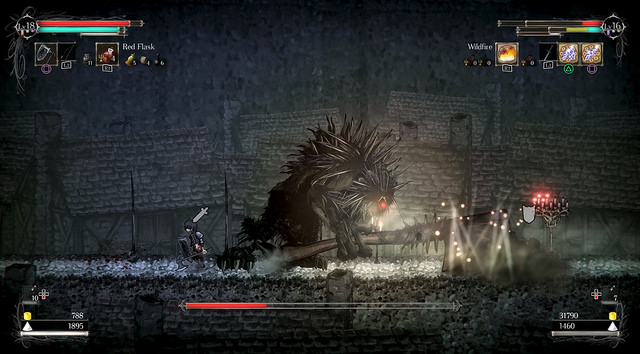 The story begins with your new hero who seems to be some sort of Royal Guard on a ship with other members of the crew. The world has been engulfed in war for centuries, and your mission is to deliver the Princess across the sea to another Kingdom in order to form an allegiance that will bring everlasting peace to the world. Unfortunately, you end up getting attacked by a group of masked men that are trying to kidnap the Princess for ransom or other evil agendas, and before you can reach her in time for rescue, a horrific sea monster appears and kills you before you even have time to draw your weapon out of its sheath, most likely because you’re too busy looking on at the game in awe at the sheer size of the beast and confused as to how you’re supposed to beat it. By the Gods’ grace, you end up alive shipwrecked on an uncharted island with the task of finding the Princess. That’s the whole premise which takes a back seat for the remainder of the game, but that’s perfectly fine as it’s the gameplay and exploration that steal the show.

The game revolves around salt and sanctuaries, hence the game title, Salt and Sanctuary. The main currency in the game is salt, which is gained from defeating enemies. You use your salt currency to level up your character and upgrade your weapons and armour so you can progress further into the deep, disturbing world. This means salt is very valuable, so when you die you will often drop all the salt you’re carrying, and you must make it back to where you died in order to reclaim it by killing the boss or enemy that obliterated you (sound familiar, Souls fans?). If you die again by any means on your way to reclaiming your lost salt, you can kiss it goodbye, as it’s gone forever. It’s a great risk-reward system as you have to judge when you should stop to turn back and head to a Sanctuary to cash in your rewards to get stronger.

Sanctuaries on the other hand are safe places where your character can resupply on items depending on the Creed they follow, level up, and/or upgrade your stats by putting points into the skill tree. You will always respawn at the last Sanctuary you visited upon death, as there are many sanctuaries in the game all over the world and they act as fast travel points to get you to certain locations quicker. Players can make offerings to a certain Creed they follow, and there being a total of 7 different factions, you will need to switch between different Creeds in order to reap the benefits of the different items and NPC’s each Creed has. It’s very confusing at first as you have no information on the factions, but makes more sense as you progress. 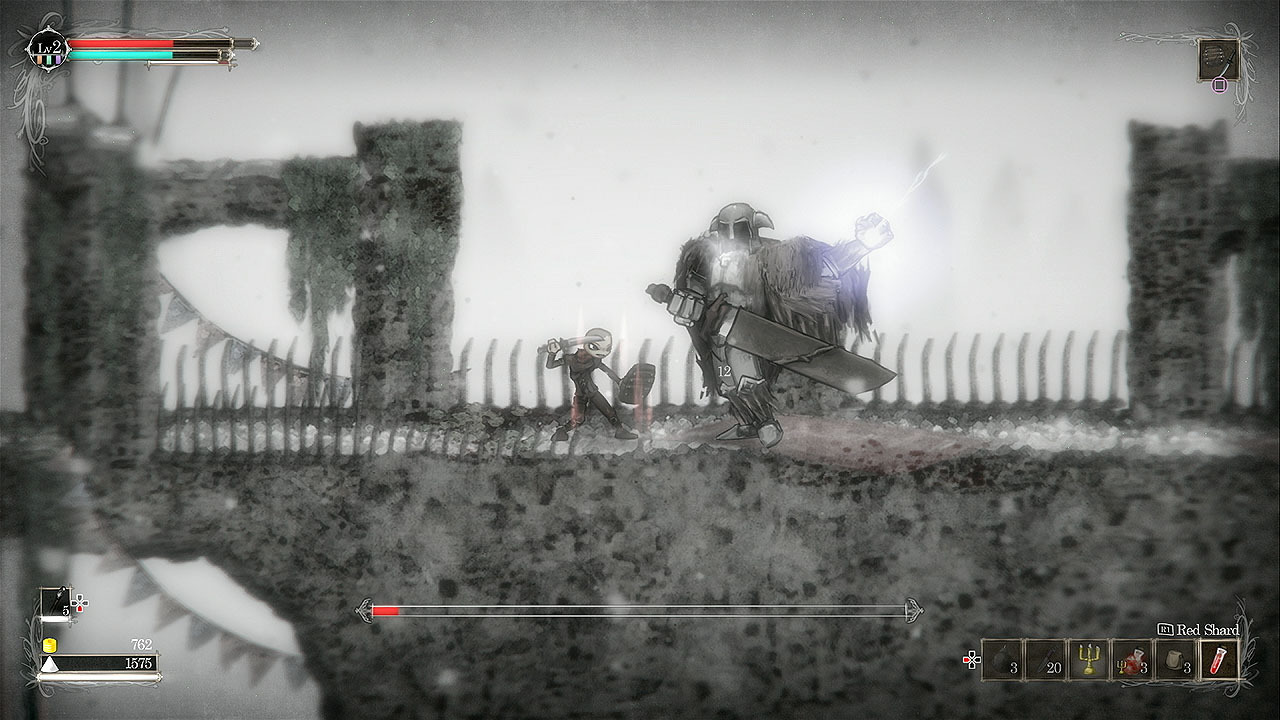 Combat is brutal, bloody, and fast and you really have to pace yourself, time your attacks, and roll and jump to avoid enemy attacks, otherwise you will get punished quite quickly. Combat varies based on your class. A Mage will use their spells to dispatch an enemy from a distance, whilst a Knight or Paladin will want to get up close and personal with their high damaging weapons and heavy armour and shield for defense. The game features over a staggering 600 unique items, in the form of weapons, armour, spells, and more, so there’s plenty for people who like to collect and get the best stuff in a game.

Bosses, as with any game, are the most powerful enemy type and Salt and Sanctuary is no exception. They come in all different shapes and sizes. The character design is truly great as each abomination looks twisted, evil, and horrifying. They not only look the part, these monstrosities are hard to beat, they hit hard and have an enormous health bar, so fights usually come down to trial and error as you study the powerful abilities at their disposal and attack patterns. Planning ahead and using any of your items to gain the advantage is the way to go. There are a total of 19 main bosses and 4 extra optional ones. They always drop a huge amount of salt and gold coins, but most importantly they drop unique items that can only be used to create the most powerful weapons in the game. 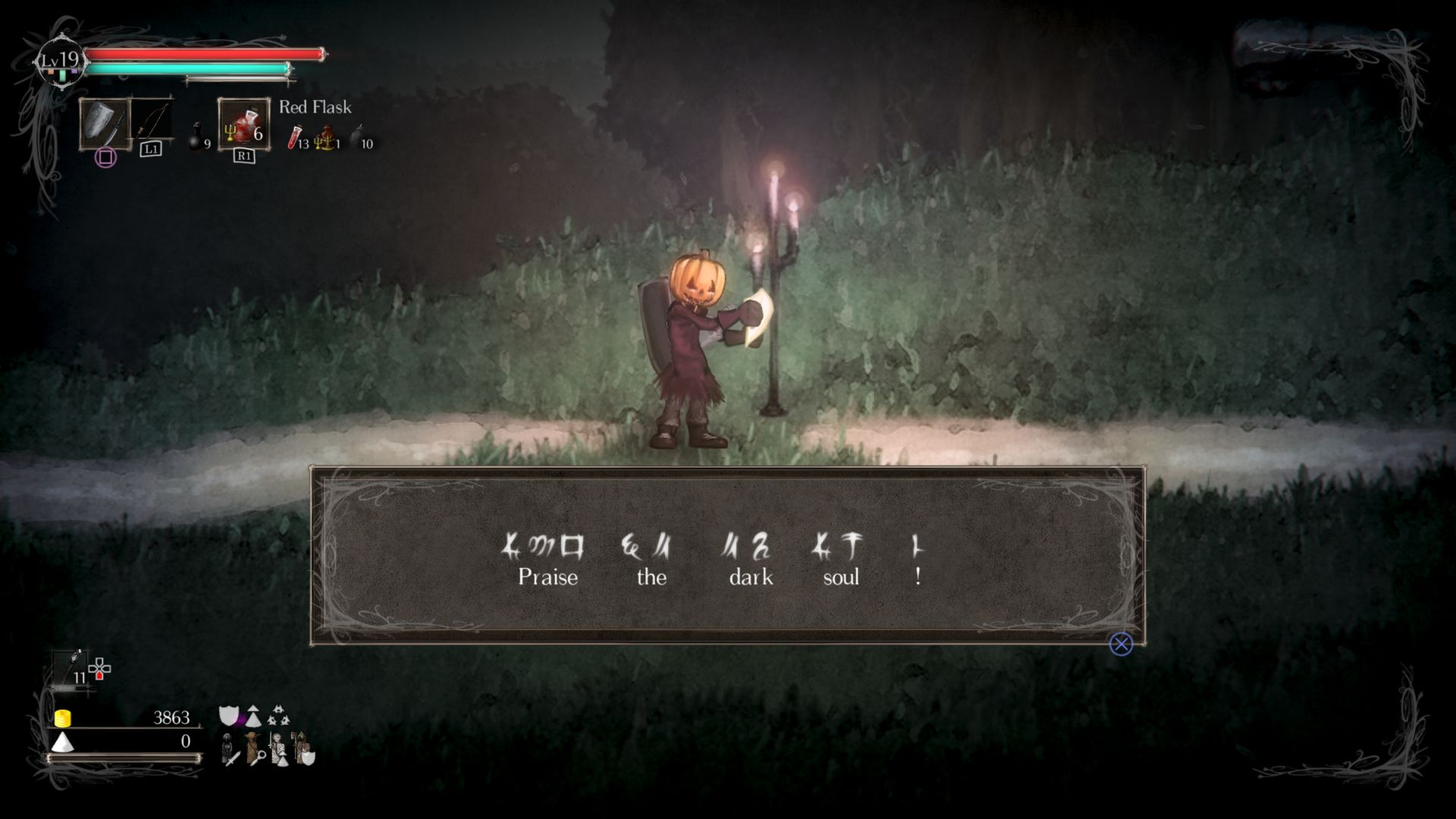 The most defining aspect of Salt and Sanctuary is the exploration. The level design is sensational and out of this world, the way the different locations interconnect with each other is beyond intelligent. As you explore, you will discover shortcuts and hidden locations that will help you when backtracking throughout the game. These shortcuts help when going to previous areas that were locked or to obtain items that you weren’t able to reach before without the necessary skills. You need to be observant, always on the lookout, and remember each location inside and out to get the best out of the game.

Just like the Souls series, you’re going to die a lot in Salt and Sanctuary before it finally clicks and makes sense. When you get to that point in the game, which will vary depending on how you take to the game, you’re in for an enjoyable experience that you would have not expected. Salt and Sanctuary provides a strong challenge and doesn’t cater to the more “casual” gamer, but the key is not to get frustrated and embrace the fact that you’re going to die a lot and just learn from your mistakes.

There is a lot of replay value to be found here with New Game+ which unlocks after you beat the game. It offers a tougher challenge as enemies have increased health and do more damage, and the game also hides new treasures for players to continue developing their character builds. Ska Studios’ three years of development can be seen throughout the game. The blood, sweat, and tears have paid off tenfold and this could easily become the start of a wonderful series, and it’s out just in time for people who want to get prepared for Dark Souls III.

*A PS4 review code for Salt and Sanctuary was provided by Ska Studios.