A real person. That’s what Naughty Dog have made Nathan Drake in this climactic instalment of the iconic Uncharted series, and it’s this which, more than any new gameplay features or graphical upgrades, truly elevates A Thief’s End above not only Drake’s previous adventures but also above every other game I’ve ever played. The same courtesy is extended to the other members of the trio that powers the game’s twisting narrative, long-term love interest Elena and Samuel Drake, Nathan’s hitherto unmentioned brother. Therefore, while this fourth Uncharted game is a technical masterclass and makes fundamental gameplay improvements, more than anything else, it’s a devastatingly effective piece of storytelling.

The typical goal for an Uncharted game has always been a playable summer blockbuster, with Nathan kicking ass and dispensing wise-cracks while romancing the various women who cross his path. While there have been digressions from this path, the extended sojourn in a Nepalese village in Uncharted 2 being perhaps the most notable example of this; the general path was set, explosive set pieces followed by periods of precarious platforming, cover shooting and puzzle solving. However, while 4 retains the set-pieces that have made Uncharted famous, it’s interested in its protagonists at a much deeper level, with the complex web of relationships and motivations producing something much closer to a character-driven thriller than a typical blockbuster. 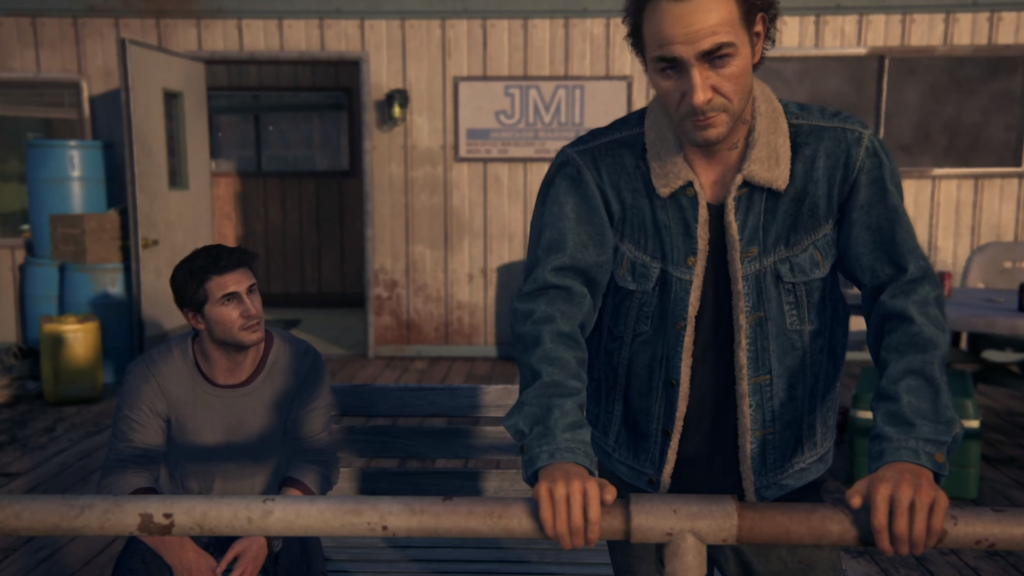 Much of the credit for this must go to Neil Druckmann and Bruce Straley, the duo parachuted in after series writer Amy Hennig and Uncharted 3 game director Justin Richmond both left Naughty Dog in March 2014. At the time, this was seen as a blow, with the change of creative leads forcing Naughty Dog to ditch eight months of work. Now, this seems like a blessing in disguise, as it’s hard to imagine that the previous version of Uncharted 4, helmed in large part by the same people who produced the first three, could have moved on from the former approach in such fundamental ways and produced a far richer and more engaging experience as a result.

Instead, the best possible scenario occurred, with new blood infusing the studio with the courage to change so much of what defined the PlayStation’s iconic series (and, let’s not forget, Sony’s resident cash cow). Of course, Druckmann and Straley were hardly unknowns, having also been responsible for The Last of Us. Taken together, The Last of Us and Uncharted 4 make the duo’s narrative interests clear; they’re interested in a more complex style of storytelling with a focus on human relationships and the sometimes less than obvious impact of those relationships. It also seems more than coincidental that the focus on partnership is transferred from The Last of Us to Uncharted, with Sam and Nathan spending huge amounts of the game together. There’s also a new emphasis on environmental storytelling, with Nathan able to pick up and examine objects he comes across on his travels in order to uncover the game’s pirate lore, and reflect upon the equally twisted historical tale he and Sam gradually uncover in pursuit of Henry Avery’s mythical pirate treasure.

In the credits, Druckmann and Straley are listed as Uncharted 4’s co-directors, a clear indication that this is an authored, cinematic experience with a clear creative vision. Nowhere is this is more prevalent than in the first few hours, with the action confidently shifted backward and forward in time; taking in a brief boat chase, the Drake brothers’ teen exploits on the roofs of their catholic orphanage, and a frenzied prison escape. All of this isn’t for show, rather at a stroke it introduces the central role that Sam has played in Nathan’s life, quite a feat when the character hasn’t even been mentioned in the first three games. To reveal much more would spoil the surprise, but suffice it to say a coherent explanation is given for this and this explanation then powers much of the game’s narrative.

Uncharted‘s globetrotting has pretty much survived unscathed, although you’ll now spend more time in each destination, giving you time to soak up their contrasting ambiences and for the developers to change each location as you play, with a level set in and around a Scottish cathedral becoming increasingly snowy as you progress, for example. The introduction of drivable vehicles in these larger levels often gives Uncharted 4 a pseudo open-world feel, with Naughty Dog generally pulling off the delicate balance of giving the player freedom and keeping them broadly on the right track, and making gameplay feel more like exploration than ever before. Ultimately, a large portion of the game is set on a single island, a single setting which produces a huge variety of gameplay as its secrets are gradually revealed. 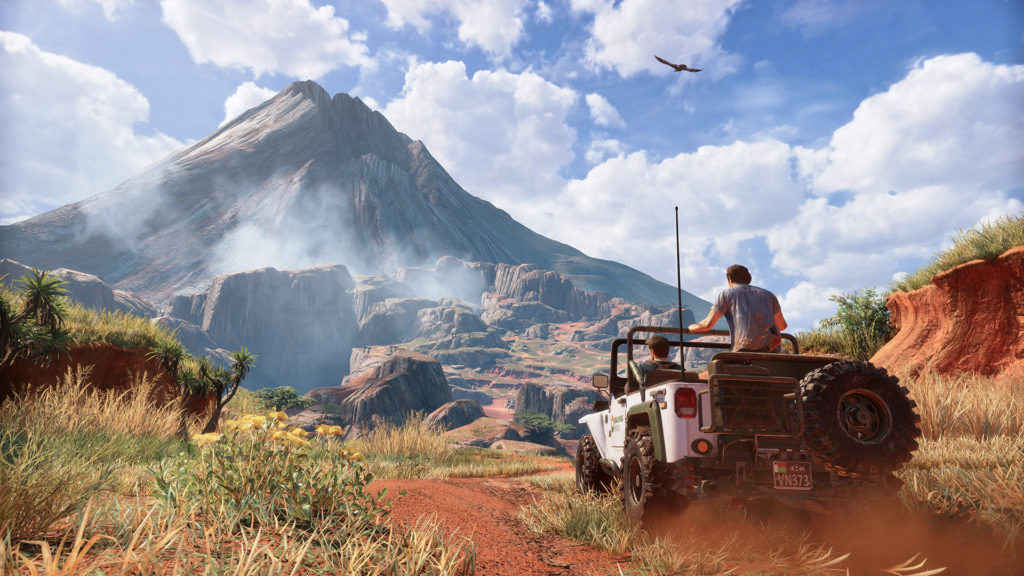 Each of Uncharted‘s core elements (puzzle solving, platforming, and combat) has been overhauled for A Thief’s End, producing an experience that’s fundamentally different from the first three games. To take each in turn, puzzles definitely closely resemble the typical Uncharted formula, with monstrous mechanisms needing to be activated and traps avoided through a combination of logic and attention to detail. However, Nathan Drake’s new journal plays a central role in many of the new puzzles, offering a space to make notes and keep historical letters that often contain vital clues. As well as acting as gameplay mechanisms, these letters fill in the detail of the game’s sprawling world and closely examining them roots Drake in a real, physical world.

The biggest addition to the platforming is a grappling hook, although that’s a somewhat grand term for what is essentially a coil of rope with a metal spike on the end, any idea of simply swooping up to distant ledges Batman-style is quickly dispelled. Instead, the grappling hook is generally used to swing across large gaps a la Tarzan, with Drake looping the rope around exposed beams and leaping off at the apex of the swing. This is further developed by numerous sequences where the player flings their grappling hook up moments before sliding off a cliff, an act of desperation that beautifully conveys Drake’s essential vulnerability. The grappling hook is also used to pull down objects and climb up walls, greatly enhancing the pleasure of navigating the game’s environments. The piton is another new addition, taking the form of a metal spike that can be jammed into softer rock in order to form new handholds, an experience which more accurately resembles real climbing than Drake simply flinging himself from ledge to ledge. Overall, these additions introduce some much needed variety into Uncharted‘s platforming and allow Drake to do more than simply hang off crumbling ledges. 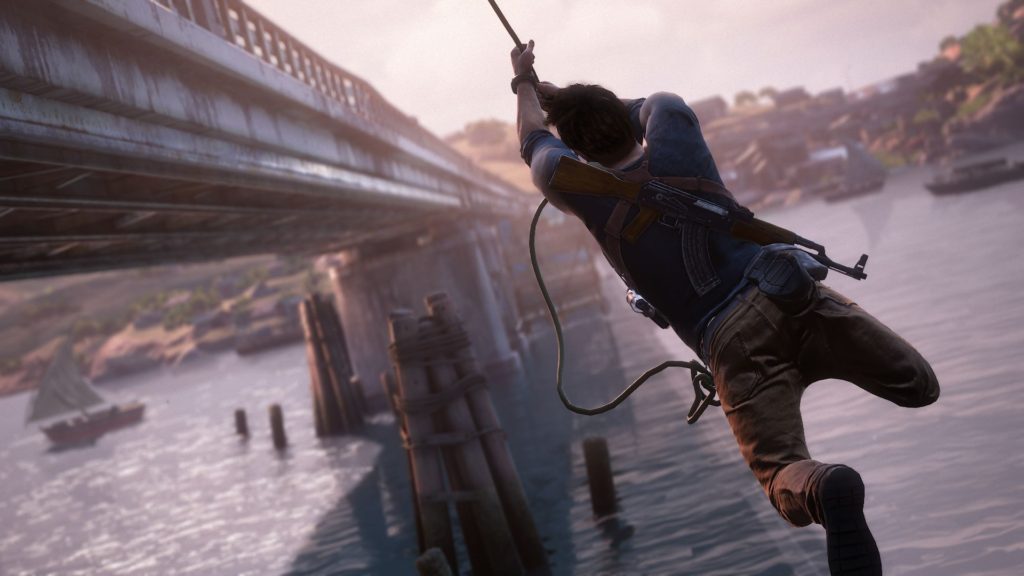 The biggest improvements, however, have been reserved for combat, with the majority of the game’s enemy encounters playing out in a more complex, realistic way than in any previous Uncharted game. Most significantly, stealth now plays a key role in how these showdowns play out, with Drake able to hide in tall grass and hang off ledges in order to take out foes undetected with a quick KO punch or neck snap. It’s a system that generally works extremely well, with vision indicators clearly showing when Drake is in an enemy’s eye-line and swaying foliage providing a genuinely viable means of concealment. Inevitably, it often all feels a little Assassin’s Creed, but Drake has none of the smoothness and grace of Ezio and co., and it generally feels more physical as a result. Skilled players will no doubt be able to take out entire battalions undetected, but will most will end up combining stealth and all-out attack, a clumsy attempt at sneaking up behind an enemy resulting in the alarm being raised and either an attempt to break line of sight and return to stealth mode or a full-on shootout.

Even this latter option though plays out in a very different way to previous Uncharted games, with greatly improved enemy AI and destructible cover combining to produce a new combat system that emphasises movement in order to both avoid getting hit and get the drop on your opponents. Emphasising this, Uncharted 4‘s encounters take place in large multi-level areas with foes almost as mobile as Drake and generally more heavily armed. They’ll fan out, leap from ledge to ledge, and throw grenades to force you out of hiding, all of which enhances the feeling that you’re fighting highly trained mercenaries rather than unresponsive robots.

Provided you can get close enough to use it, melee combat has also been greatly improved, with Drake able to execute flying kicks, clotheslines, and roundhouse punches with square and escape from enemy grapples with hurried tapping of triangle. Spotting an enemy near an exposed beam is also a highlight; with one of Drake’s slickest new moves the ability to jump from a grapple swing straight into a KO punch, getting rid of an enemy with a satisfying thud. You’ll also rarely be fighting alone, with your companions generally proving themselves to be able allies rather than annoying deadweights. In short, the era of hiding behind cover and picking off your enemies is pretty much over, instead you’ll be silently snapping necks, throwing enemies off ledges, scrambling from cover to cover, and delivering death (or at least unconsciousness) from above. 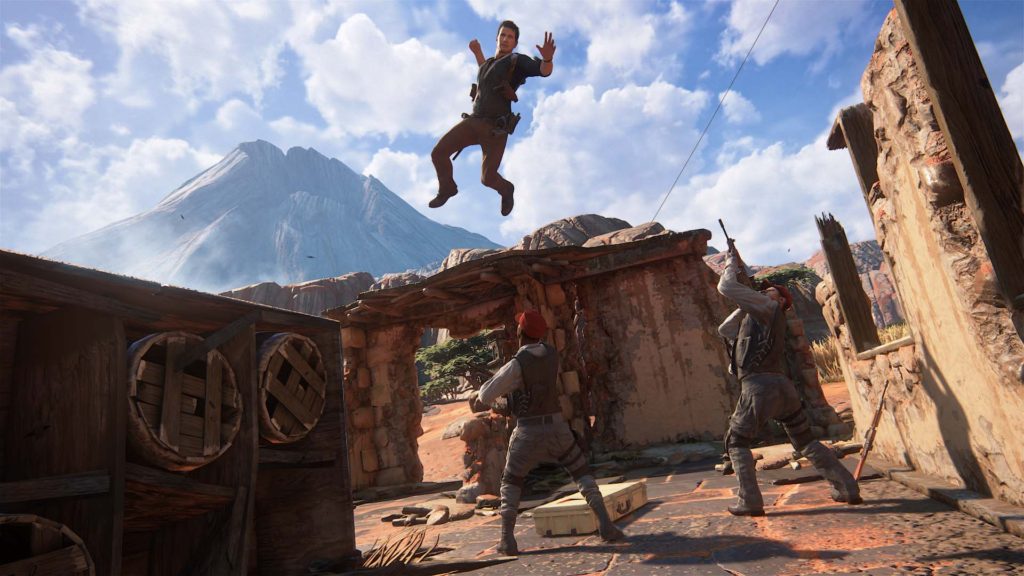 In the face of such fundamental improvements to story and gameplay, the game’s technical prowess could easily be taken for granted, but Uncharted 4’s graphics, motion capture, and animations still combine to provide moments that take the breath away. Whatever you’re doing, whether it’s driving a jeep around the wilds of Madagascar, exploring an underwater wreck, engaging in a frantic shootout, or hanging off a cliff edge, the game looks stunning, with sunlight coming through the trees, mud flying up from frantic scrambles, and foliage swaying as you pick your way through it. Particular attention is also paid to lighting, with elements such as the sudden burst of light as you emerge from a dark prison cell invaluable in creating the air of cinematic realism that’s Naughty Dog’s calling card.

Helped by the new facial motion capture, the whole cast deliver excellent performances, with Nolan North and Troy Baker exhibiting particular chemistry as the dashing Drakes. Richard McGonagle combines Sully’s typical avuncularity with a natural distrust of Sam, the disruptive interloper into what was previously a solid unit. Emily Rose meanwhile captures both the serious and playful sides of Elena, giving Nathan Drake’s personal and emotional dilemmas real heft. The villains also do a strong job, with Warren Kole imbuing collaborator turned antagonist Rafe Adler with the requisite smarmy unlikability. He joins forces with Shoreline, a private army controlled by South African Nadine Ross, played by Laura Bailey with a refreshing lack of emotion and a realistic concern for the bottom line.

All of this combines to produce a title that ranks among the best games ever made, a compelling, emotionally-driven narrative that’s beautiful to watch and provides genuinely compelling gameplay, packed with complex characters and enthralling set pieces.